In our previous study, we reported that the levels of m2 muscarinic acetylcholine receptor and gammaaminobutyric acid receptor α1 in motoneurons were downregulated in the axotomized adult facial nucleus. These results led us to speculate that the phenomenon was attributable to an interruption of the retrograde supply of glial cell line-derived neurotrophic factor (GDNF). To investigate this possibility, in this study we determined the levels of GDNF in the adult rat axotomized facial nucleus. Western blotting revealed that the amounts of GDNF in the transected facial nucleus significantly decreased from 6 h to 7 d post-insult and returned to control levels at 3-5 weeks post-insult. Immunohistochemical study of the facial nucleus at 3 d post-insult indicated that many cells were positively stained by anti-GDNF antibody in the control facial nucleus, but the degree of staining was lower in the axotomized facial nucleus. The anti-GDNF antibody-stained cells in the facial nucleus were almost coincident with the anti-NMDA receptor 3B subunit (NR3B) antibody-positive cells, suggesting that the former were motoneurons. Together, these results demonstrated that GDNF levels in injured facial motoneurons transiently decreased from 6 h to 7 d post-insult but subsequently returned to the control levels.

We previously reported that adult rat facial nerve axotomy led to decreased levels of m2 muscarinic acetylcholine receptor (m2MAchR) and gamma-aminobutyric acid receptor α1 (GABAARα1) in living motoneurons in the ipsilateral nucleus [1,2]. This phenomenon allowed us to speculate that these receptors in motoneurons were downregulated due to the deprivation of a specific neurotrophic factor that would be retrogradely transported from the target tissue. In the present study, we focused on glial cell line-derived neurotrophic factor (GDNF) as a possible candidate. The main contributions of GDNF to the motor system are considered to involve its function as a target (muscle)-derived neurotrophic factor [3-5], although GDNF is also produced in non-target tissues/cells, including glial cells.

8-week-old Wistar rats (three female and three male) were originally purchased from Clea Japan (Tokyo), and the progeny were obtained by home breeding. Only male littermates were chosen and kept on a 12-h daylight cycle ad libitum. At 8 weeks of age, they were subjected to the operation. In total, 36 male rats were used in this study.

The experiments were carried out in accordance with the guidelines laid down by the NIH regarding the care and use of animals, and were approved by the ethics committee of Soka University (approval code: 18005).

The right facial nerves of adult rats were cut at the stylomastoid foramen under diethylether anesthesia, as described previously [1,2]. The left facial nerves were left without any treatment. The rats were reared for 6, 12 or 24 h; for 3, 5 or 7 d; or for 2, 3 or 5 weeks, and were decapitated under anaesthesia. The whole brains were removed, frozen on dry ice and stored at -80°C until the facial nuclei were cut out.

The contralateral and ipsilateral facial nuclei were carefully cut out from the frozen brainstem. The cut facial nuclei were solubilized with non-reducing sample buffer (62.5 mmol/L Tris-HCl (pH 6.8), 2% sodium dodecyl sulfate, and 5% glycerol) and centrifuged at 100,000 g for 30 min. The supernatant of each facial nucleus was recovered as tissue extract. The protein in the tissue extract was quantified by the method of Lowry et al. [9]. The resultant tissue extract was prepared to contain 10% 2-mercaptoethanol, and then was subjected to immunoblotting for GDNF (1:2000) and actin (1:4000). By using authentic rat GDNF, we confirmed that our GDNF-determining system can detect 2 ng rat GDNF per lane in immunoblotting.

The brainstem was cut into 20-μm-thick sections with a cryostat (Leica CM1510; Leica Biosystems, Nussloch, Germany) at the level of the facial nuclei, and the sections were frozen at -80°C until staining.

For dual staining with fluorescence, the cryosections were incubated first with anti-GDNF antibody (1:100) for 16 h and then with anti-NR3B antibody (1:500) for 16 h at 4°C. Subsequently, these sections were incubated with Alexa Fluor 488-conjugated anti-goat IgG (1:200) and Alexa Fluor 568- conjugated anti-rabbit IgG (1:200) for 3 h at room temperature. The sections were then dehydrated, mounted, and observed by a fluorescent microscope.

The densities of protein bands (GDNF) in immunoblotting were measured by densitometry using ImageJ software (NIH, Bethesda, MD). These densities were expressed as the means ± SDs of three or four separate experiments. Differences between the contralateral and ipsilateral nuclei were assessed via student’s t-test. In all cases, P values less than 0.05 were considered significant (*P<0.05, **P<0.01). 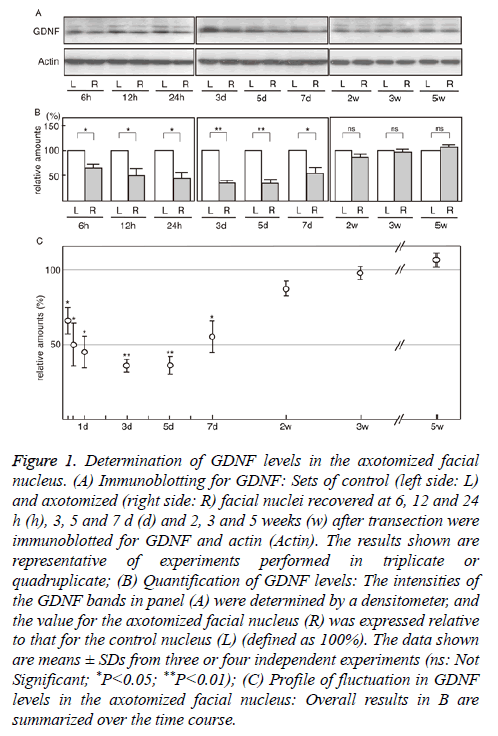 Figure 1: Determination of GDNF levels in the axotomized facial nucleus. (A) Immunoblotting for GDNF: Sets of control (left side: L) and axotomized (right side: R) facial nuclei recovered at 6, 12 and 24 h (h), 3, 5 and 7 d (d) and 2, 3 and 5 weeks (w) after transection were immunoblotted for GDNF and actin (Actin). The results shown are representative of experiments performed in triplicate or quadruplicate; (B) Quantification of GDNF levels: The intensities of the GDNF bands in panel (A) were determined by a densitometer, and the value for the axotomized facial nucleus (R) was expressed relative to that for the control nucleus (L) (defined as 100%). The data shown are means ± SDs from three or four independent experiments (ns: Not Significant; *P<0.05; **P<0.01); (C) Profile of fluctuation in GDNF levels in the axotomized facial nucleus: Overall results in B are summarized over the time course.

Immunohistochemical study for GDNF protein in the transected facial nucleus 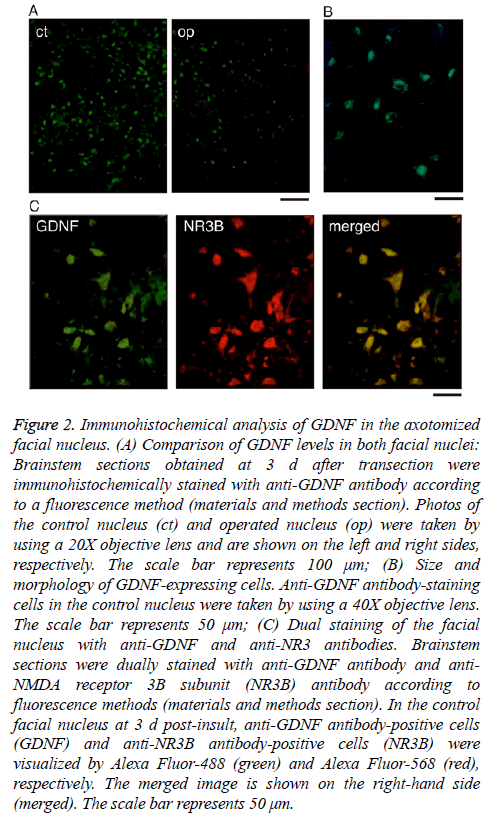 Figure 2: Immunohistochemical analysis of GDNF in the axotomized facial nucleus. (A) Comparison of GDNF levels in both facial nuclei: Brainstem sections obtained at 3 d after transection were immunohistochemically stained with anti-GDNF antibody according to a fluorescence method (materials and methods section). Photos of the control nucleus (ct) and operated nucleus (op) were taken by using a 20X objective lens and are shown on the left and right sides, respectively. The scale bar represents 100 μm; (B) Size and morphology of GDNF-expressing cells. Anti-GDNF antibody-staining cells in the control nucleus were taken by using a 40X objective lens. The scale bar represents 50 μm; (C) Dual staining of the facial nucleus with anti-GDNF and anti-NR3 antibodies. Brainstem sections were dually stained with anti-GDNF antibody and anti- NMDA receptor 3B subunit (NR3B) antibody according to fluorescence methods (materials and methods section). In the control facial nucleus at 3 d post-insult, anti-GDNF antibody-positive cells (GDNF) and anti-NR3B antibody-positive cells (NR3B) were visualized by Alexa Fluor-488 (green) and Alexa Fluor-568 (red), respectively. The merged image is shown on the right-hand side (merged). The scale bar represents 50 μm.

We showed here a phenomenon in which amounts of GDNF in the injured facial nucleus are upregulated before the reinnervation of the facial nerve. Injured facial motoneurons have been suggested not to re-innervate target muscle at 7-14 d post-insult [18], in which case they could not directly obtain GDNF from the target tissue at that time. However, as shown in Figure 1B, the levels of GDNF in the axotomized nucleus tended to increase from 7 d post-insult. From where was GDNF supplied? There are two possibilities. One is that motoneurons themselves enhanced the production of GDNF. A neurotrophin BDNF is known to be enhanced in transected adult rat facial motoneurons after nerve injury [16]. Similar to the case, it is possible that the injured motoneurons promote the production of GDNF after 7 d post-insult. Another plausible possibility is that glial cells such as microglia and astrocytes around injured motoneurons supply GDNF. Schwann cells at cut nerves might also be able to supply the neurotrophic factor. In such a situation, the injured motoneurons could obtain some amounts of GDNF by enhancing their production of GDNF receptors (GDNFR-α mRNA, c-ret mRNA) [15] and would restore their metabolism and functional state. Glial cells including astrocytes [19,20], microglia [21,22] and Schwann cells [6,23] in vitro have actually been shown to have the ability to express GDNF protein. Thus, there is likelihood that glial cell-derived GDNF is supplied to injured motoneurons in vivo in the adult stage.

In this study, we provided important information about the changes in GDNF levels in the injury/repair processes of motoneurons. We believe that our findings will contribute to an elucidation of the mechanism by which injured adult motoneurons restore their cellular metabolism and function.

Transection of the adult rat facial nerve led to a transient downregulation of GDNF in the ipsilateral facial nucleus. Injured motoneurons were thought to decrease GDNF levels.

Yuhki Nagai performed the axotomy on the animals and was primarily responsible for analyzing GDNF protein by immunoblotting. Takashi Ishijima prepared the animals for this study and assisted Yuhki Nagai. Kazuyuki Nakajima contributed to the design of the study and carried out immunohistochemistry for GDNF.

This research was not supported by any grant from funding agencies in the public, commercial, or not-for-profit sectors.

We thank Yoko Tohyama for her very good and careful care of the animals.