Teams against delirium: A project in a nursing home "Cialdini" in Modena

Delirium, an acute disorder of attention and cognition, is a serious, costly, underrecognized and often fatal condition for seniors. Given its typically complex multifactorial etiology, multicomponent nonpharmacologic risk factor approaches have proven to be the most effective strategy for prevention. The aim of this case-control study was to examine differences in delirium detection and management in a NH between two care units (Unit A and B), of which only Unit B has benefited from multiprofessional staff training on delirium detection, diagnosis and nonpharmacological management. In particular, the measured outcomes were the differences between clinical negative outcome (mortality rate, number of hospital admissions, number of falls, and presence of incontinence or pressure ulcers) between the two units. Results: There were no significant differences between groups (Unit A: 52 elderly of which 31 affected by moderate and severe dementia and Unit B: 61 elderly of whom 31 affected by moderate to severe dementia) regarding: sex distribution, rate of moderate and severe dementia, age and comorbidity, but the two groups differed by the number of medications employed. After staff training only in Unit B were detected 17 case of delirium underlying most urinary infection (23%) and pain (29%). Early detection and non-pharmacological multicomponent manage in Unit B was able to reduce negative outcomes, in particularly fall and incontinence, more than in Unit A. After Delirium manifestation, none a specific but a multicomponent non-pharmacological approach reduced duration of Delirium. A skilled interdisciplinary team can improve diagnosis and prevent Delirium. Continuos trainig is a key-point to join protocols.

Delirium is an acute disorder in cognition characterized by a disturbance in focus and sustaining attention and awareness, which develops over a short period of time, typically hours to days and fluctuates throughout the day. The disturbances are not explained by a pre-existing neurocognitive disorder and they are related to a medical condition (DSM V). It is a common, serious, costly and often fatal condition for seniors. Its diagnosis, often unrecognized, requires a formal cognitive assessment and history of acute onset of symptoms. The most effective strategy to reduce incidence of Delirium and complications is the prevention that means reduction in avoidable risk factors: disorientation, malnutrition, immobilization, sleep disturbance, sensory deprivation, pain, dehydration, ipoxia, unnecessary drugs [1,2]. Delirium is associated with increase of comorbidity, functional and cognitive worsening; in fact Delirium may serve as a marker of the vulnerable brain with diminished reserve capacity.

Nowadays there is no convincing evidence that pharmacologic prevention or treatment is effective. Drug reduction for sedation and analgesia combined with nonpharmacologic approaches are recommended. In medical and geriatric wards, the prevalence of delirium (present on admission) is of 18-35%. The prevalence of delirium in the community setting is relatively low (1-2%), but its onset usually brings the patient to emergency care. On presentation to the emergency department, delirium is present in 8-17% of all seniors and 40% of nursing home (NH) residents [3]; in particular with moderate-severe dementia [4]. These show high mortality, morbidity, risk of hospital- readmission or longer length of hospitalization [5], increase of costs [6]. In particular length of Delirium in NH residents is higher than hospitalized elders [7]. One of the reasons why Delirium is often under diagnosed is because of poor knowledge and failing staff communication; the consequences are worse clinic and functional outcomes [8]. HELP program in hospital demonstrated that a good staff training about Delirium prevention can reduce incident and duration of Delirium and improve outcomes [8,9] but low knowledge are available about prevention in outpatient setting [10-12].

The purpose of this case-control study was to examine differences in delirium detection and management in a NH between two care units (Unit A and B), of which only one (Unit B) has benefited from multiprofessional staff training on delirium detection, diagnosis and non-pharmacological management.

In particular, the measured outcomes were the differences between clinical negative outcome between the two units A and B.

Main outcome was to evaluate whether specific training on non-pharmacological diagnosis, prevention and treatment of Delirium can help to detect more cases of delirium.

1) To evaluate the differences between the two units (A and B) in mortality rate, number of hospital admissions, number of falls, and presence of incontinence or pressure ulcers.

2) To evaluate whether there are differences between nonpharmacological approaches in reducing the duration of delirium.

In the NH "E. Cialdini "in Modena in a period of one month were assisted 113 guests, 42 men and 71 women with an average age of 84.9 years. The study provided for comparison between two NH units (A”control group” and B”case group”) in the detection, evaluation and management of complications of Delirium cases. Nurses involved in Unit B were offered a specific training of 4 hours. Nucleus A had a group control function without having been trained on Delirium. Both patients' units have been evaluated in: comorbidity (CIRS) (10), number of drugs, onset of delirium, triggering cause, possible pharmacological and/or non-pharmacological approach to the cause. The measured outcomes were: mortality, hospital admissions, falls, incontinence or pressure ulcers onset.

Delirium has been diagnosed using the Confused Assessment Method (CAM) validated tool (11). In Unit B, a database was also collected to identify which approaches to prevent or which kind of pharmacological or non -pharmacological interventions have been adopted. Regarding last one we considered this check-list: reorientation, hydration, intestinal problems treatment, oxygen control and/or administration if necessary, catheter elimination, early mobilization, pain relief after detection and measurement, reduction in the number of medication, elimination of physical restraints, interventions on sensory deprivation and promoting sleep. In both group nurses had completed a university degree course, the average age was 27 years with 3 years of work experience.

Regarding to our main outcomes

1) There was a clear and significant difference in the Delirium detection: Unit B was able to notice 17 cases of delirium (27.86% prevalence), of which 12 associated with moderate-severe dementia, meanwhile no case of Delirium emerged in Unit A during the same period. Main cause underlying Delirium cases were urinary tract infection and pain (Figure 1). 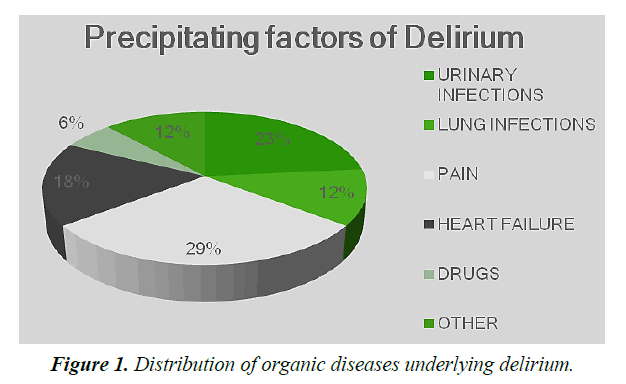 2) The two groups were compared to evaluate the difference with regard to the worst clinical outcomes; there were significant increase in the number of drops (p=0.020) and incontinence onset (p=0.001) in the control group (A) compared with the experimental group (B). Group B had less pression ulcers, although not statistically significant; moreover significant reduction in the number of drugs, admissions and deaths respect to group A (Figure 2). It should be noted that the 17 cases in group B with delirium have not seen any pression ulcers or incontinence onset and none fall. 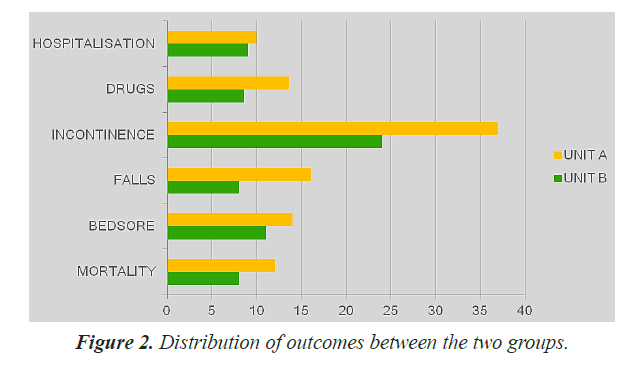 Figure 2: Distribution of outcomes between the two groups.

3) The average duration of delirium was 4.5 days (SD=3.5). The non-pharmacological approaches used for the prevention and management of delirium were: reorientation (82.4%), hydration (64.7%), intestinal regularization (23.5%), control and / or oxygen administration (5.9%), pain relief (35.3%), elimination of physical restraints (5%), reduction of the number of drugs (76.5%), catheter removal (9%), sleep (17.6%) and sensory deprivation interventions (80%), but none in particular seemed to have had a significant correlation with the duration of delirium. There is no significant correlation between the number of drugs and duration of delirium.

Staff education and training program is necessary to recognize and detect Delirium event. Moreover, as in Wand study 2011, continues staff training is a key point in best practice to join protocols (in our study all clients benefit almost one non pharmacological intervention). Nonpharmacologic approaches focuses on risk factors are effective for delirium prevention and treatment. None specific intervention seems to reduce Delirium duration but a skilled interdisciplinary team and a tailored approach can improve diagnosis, prevention and quality of life in this frail sample, in particular in reduction of incontinence and falls. A limit of the study is the small sample but the results induce to a desirable stimulus to spread this experience and training about Delirium management in NH.