Takotsubo cardiomyopathy is characterized by temporary left ventricular dysfunction generally in the setting of physical or emotional stress. This case describes a patient originally admitted for altered mental status due to presumed uremic encephalopathy who developed prolonged QTc leading to torsades de pointes and ventricular fibrillation (V-fib) arrest during her hospital stay, with echocardiographic evidence of Takotsubo cardiomyopathy. It should be recognized by clinicians that stress-induced cardiomyopathy can by precipitated by metabolic derangements such as severe hypoglycemia or heroin withdrawal and complicated by significant arrhythmic events such as torsades de pointes and ventricular fibrillation.

Stress-induced (Takotsubo) cardiomyopathy, which is characterized by transient regional systolic dysfunction of the left ventricle not confined to the distribution of a single coronary artery, is a poorly understood entity. Originally, this condition was believed to be caused predominantly by emotional triggers, such as grief, anxiety, and interpersonal conflict [1,2]. However, more recent research into the topic has shown that this condition is triggered by physical stressors, such as infection, surgery, respiratory failure, and central nervous system (CNS) conditions almost as frequently as by emotional conditions [1,3]. Takotsubo cardiomyopathy predominantly affects females, in almost a 9:1 ratio according to previous large-scale studies [1,4]. Typically, it presents with symptoms nearly identical to that of acute coronary syndrome, and most commonly is associated with hypokinesis or akinesis of the apical segments of left ventricle i.e., on echocardiography (“apical ballooning syndrome”) [5]. The mechanism of the condition is still incompletely understood, but is postulated to be due to myocardial stunning in response to a catecholamine surge or microvascular compromise [2]. In this case, we present a patient who developed Takotsubo cardiomyopathy after an unusual combination of triggersheroin withdrawal, profound hypoglycemia and other metabolic disturbances, and recent COVID-19 infection which was complicated by torsades de pointes and cardiac arrest.

The patient is a 56-year-old female with a past medical history significant of hypertension, bilateral renal artery stenosis leading to end-stage renal disease requiring hemodialysis, polysubstance abuse, heart failure with preserved ejection fraction (with a last known left ventricular (LV) ejection fraction of 75% three years previously), grade 3 diastolic dysfunction and group 2 pulmonary hypertension, who presented to the ED with altered mental status, nausea, and vomiting after two missed dialysis sessions. A history could not be obtained from the patient at the time due to her mental state, but according to her brother, she used heroin and cocaine daily, including on the day of admission. He also reports she was positive for COVID-19 in the previous two weeks and was asymptomatic.

In the Emergency Department (ED), the patient’s vital signs were T 97.4?F, blood pressure 211/111 mm Hg, heart rate 93 beats per minute, respiratory rate 18 per minute, O2 saturation 96% on room air. Her laboratory results were significant for hyperkalemia (7.0 mmol/l, hemolyzed; 5.2 mmol/l when repeated later in the day after dialysis), HCO3 of 16 mmol/l, BUN 82 mg/dl, creatinine 9.6 gm/dl, hyperammonemia (122 μmol/L), glucose 75 mg/dl, AST 43 U/l, ALT 13U/l, ALP 195 IU/L, and BNP of 2225 pg/ml. Troponin I was within normal limits x2. The patient’s chest-x-ray was unremarkable, and initial ECG showed atrial fibrillation (A-fib) with HR of 96, left axis deviation, poor R wave progression, in anterior leads, peaked T waves due to hyperkalemia, and a QTc of 429 ms (Figure 1 ). The patient was dialyzed in the ED and admitted to the Medicine service. 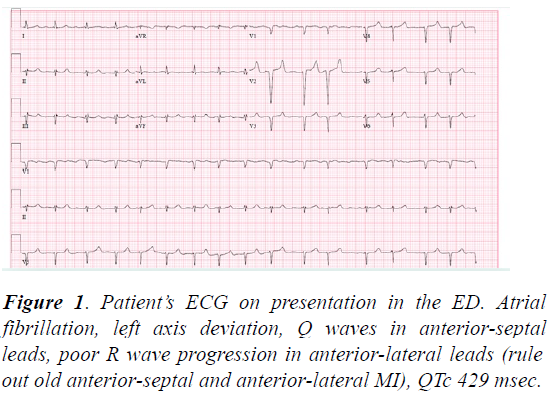 The next morning, the patient was found to have a fingerstick glucose reading of 6 mg/dl. She was unresponsive and required intubation with mechanical ventilation. Despite initial resolution with infusion of dextrose 10% (D10) solution, her hypoglycemia was persistent and required further D10 infusions. Her further ECG demonstrated progressive QTc prolongation with each subsequent ECG. On Day 2, her ECG demonstrated QTc at 840 ms, as well as profoundly deep Twave inversions in the anterolateral leads, T wave alternans (Figure 2). 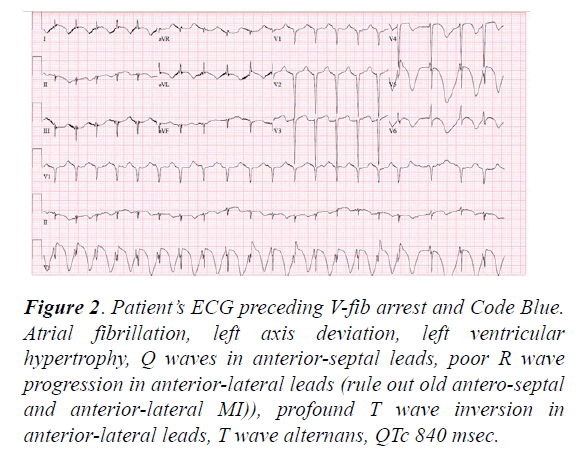 During ICU rounds, the team again noted multiple runs of ventricular tachycardia (V-tach) with heart rate in the 140’s. She was given 5 mg of metoprolol, IV with improvement of her heart rate to the 90s, but still with short runs of V-tach. Transthoracic echocardiogram (TTE) was performed at the bedside and showed severely depressed LV systolic function, with ejection fraction of 28%; further, it showed global hypokinesis with severely depressed contraction in the apical segments, suspicious for Takotsubo cardiomyopathy.

The primary team ordered amiodarone in order to prevent further ventricular arrhythmia, but before it could be given, the patient became tachycardic to the 160s. On exam, she was found to be pulseless and demonstrated torsades de pointes on the telemetry monitor, later deteriorating to V-fib. A code blue was called, and cardiopulmonary resuscitation (CPR) was initiated. Return of spontaneous circulation was achieved after 3 rounds of CPR--including 1 defibrillation for V-fib, one 1 mg push of epinephrine, as well as amiodarone 300 mg IV and 2 boluses of intravenous magnesium. She was started on norepinephrine and vasopressin for maintenance of blood pressure, and was maintained on amiodarone infusion for prevention of further ventricular arrhythmias.

An ECG after the code showed A-fib with a persistence of a prolonged QTc (641 ms), and T-wave inversions in the anterolateral leads (Figure 3). 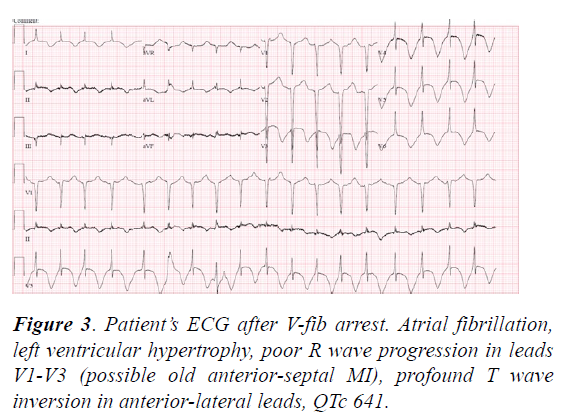 Laboratory results were significant for a mild increase in serum troponin from 0.7 mg/mL to 0.82 mg/mL. Over the next week, she was maintained on mechanical ventilation, continuous renal replacement therapy, vasopressors, amiodarone infusion and strict monitoring of electrolytes. She was weaned off of vasopressors within a few days and extubated, with recovery of mental status. A repeat ECG (Figure 4) showed A-fib with near-normalization of the QTc interval and T wave inversions. Repeat TTE one week after her V-fib arrest demonstrated nearcomplete recovery of LV systolic function with an ejection fraction of 66% and no regional wall motion abnormalities. 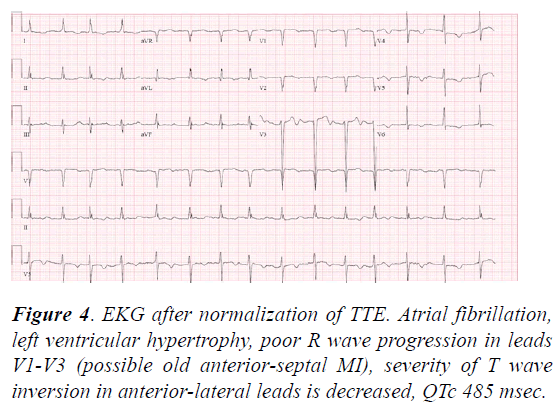 After downgrade from the ICU, a left-heart catheterization was performed to evaluate for ischemic pathology: the catheterization demonstrated 95% occlusion of the distal left circumflex coronary artery and non-obstructive lesions of the right coronary artery. These findings did not correspond with the wall motion abnormalities demonstrated on the patient’s pre-and post-code TTEs. No intervention was performed at the time since the patient decided to leave against medical advice.

Takotsubo cardiomyopathy can occur after psychological or physiological stress. Common emotional or psychological stressors include grief or loss of a loved one, fear, and intense anger [1,6]. Physical stressors include acute respiratory failure,infection, fracture or trauma, central nervous system conditions, and malignancy; sometimes no clear trigger is ascertained, making diagnosis more difficult [1,3-7]. A literature search revealed limited instances of severe hypoglycemia and heroin withdrawal being the precipitating causes for Takotsubo cardiomyopathy [8,9] complicated with QTc prolongation, torsades de pointes and V-fib. We are uncertain whether COVID-19 infection contributed to her development of Takotsubo cardiomyopathy as the infection was asymptomatic in her case and occurred a significant period of time prior to her presentation.

In conclusion, it is important for clinicians to consider a stressinduced cardiomyopathy in patients who develop left ventricular systolic dysfunction following hypoglycemia or heroin withdrawal and be aware of torsade’s de pointes as a possible complication of this entity.