The present work describes the use of Caffeic acid, a naturally occurring plant polyphenol for the biofabrication of silver nanoparticles (AgNPs) by an eco-friendly approach. The caffeic acid acts as both reducing and stabilizing agent during the reduction of graphene oxide (GO). TEM, XRD, UV-vis, FT-IR and EDS characterization results confirmed the AgNPs formation. FTIR results have confirmed the capping of AgNPs with the oxidized caffeic acid molecules, which causes their stabilization by preventing aggregation of nuclei. TEM images showed the formation of small, spherical NPs. The average size of the AgNPs was about 10 nm, which was supported by TEM and DLS results. Additionally, SAED pattern revealed the polydispersity of the synthesized AgNPs with crystalline nature. Further, the in-vitro cytotoxicity against the osteoarthritis chondrocytes showed the biocompatibility of the synthesized AgNPs. Further the biocompatibility of AgNPs opens its applications towards biomedical fields such as drug delivery and bioimaging. These results also open a biosynthetic route for the development of new AgNPs based technologies.

Nanomaterials are considered to be gifted materials in the rapidly growing field of science and technology. Because of their exceptional size-dependent properties, these materials are indispensable and superior in many environmental and human related activities. Various physical and chemical approaches are available for the successful production of nanoparticles. But, these synthetic approaches are potentially dangerous and expensive for bulk scale production. On the other hand, the use of biological microbes, biomolecules and plant extracts or plant polyphenols could be considered as a substitute to physical and chemical approaches for the eco-friendly synthesis of nanoparticles [1-3].

Many reports are available for the production of gold and silver nanoparticles using of naturally available materials such as bacteria, fungi, plant extracts, yeast and honey [4]. On the other hand, the larvicidal activity of AgNPs prepared by using Eclipta prostrata leaf extract against malaria and filariasis vectors was studied by Rajakumar and Abdul Rahuman [5]. Similarly, MubarakAli et al. [6] have reported the synthesis of antimicrobial Ag and AuNPs against clinically isolated pathogens.

The present work reports the simple and rapid synthesis of AgNPs in aqueous medium using Caffeic acid as reducing and stabilizing agent. The hydroxyl groups present in the Caffeic acid play role in the reduction of Ag+ during the formation of AgNPs. The subsequently formed oxidised Caffeic acid will stabilize the formed Ag nuclei and prevents the aggregation. We also have showed how the oxidised Caffeic acid molecules involve in the capping of the formed AgNPs. The in-vitro cytotoxicity of the prepared AgNPs was checked against cardiac cell lines of catla catla.

About 5 mL of Caffeic acid (20 mM) was added to a 5 mL of 2 × 10-3 M of AgNO3 and the reaction mixture was stirred for about 20 min at room temperature conditions. The change in the color of the solution from colorless to brown indicated the formation of silver nanoparticles.

Osteoarthritic chondrocytes were isolated from the fragments of articular cartilage by following the reported procedure [7]. In brief, a sequential enzymatic digestion of articular cartilage fragments was conducted for half an hour using 0.1%of hyaluronidase and 1 h with 0.5 % of pronase, which then followed by digestion with 0.2% of collagenase for about 1 h at 37°C in a solution mixture consisting of penicillin/ streptomycin, Dulbecco’s modified Eagle medium (DMEM) and amphotericin. The consequently obtained cell suspension was then filtered two times with 70 μm nylon meshes and centrifuged at 700 rpm for about 10 min. The resulting suspension consists of 90-95 % viable cells, which were later tested by Trypan blue viability test. The resulting primary chondrocyte cultures were then incubated in 5 % CO2 at 37°C for about two weeks.

The Osteoarthritic chondrocytes were initially seeded at 4 × 104 cells/well in 24-well microplates and then about 1 ml of DMEM medium consisting of 200 mg ml-1 streptomycin, 2 mM glutamine, phenol red with 10% fetal calf serum, 200 U ml-1 penicillin was added and the cells were allowed to become pre-confluent. Then after, the cells are treated with various concentrations of AgNPs (10, 20, 40, 80 and 100 ppm) for one day. On the other hand, a control experiment was performed without the presence of AgNPs under the same experimental conditions. Further, the cell viability was known by the eosin Y test (0.5%) In 0.9% Sodium chloride solution. Later, the samples stained and studied under light microscope. The unstained and stained cells were regarded as live and dead cells correspondingly.

The UV-visible absorption of the AgNPs was measured by using a UV-Vis spectrophotometer (Shimedzu 2400) at a resolution of 1 nm under room temperature conditions. The size and morphology of the caffeic acid mediated AgNPs was analysed by using HR-TEM instrument (JEOL JEM 2100). Sample for HR-TEM studies was prepared by introducing a drop of AgNPs dispersion onto the copper grid surface and allowed to dry under vacuum. A successive measurement of SAED pattern also carried out. Also, XRD studies of AgNPs was conducted by using an Advance diffractometer (Bruker D8) over the range of 10 to 80 with a step size of 0.02°, scanning speed of 4°/min and Cu Kα radiation (λ= 1.54 Å). Additionally, DLS and zeta potential of AgNPs was studied by using Horiba Scientific Nanoparticci instrument (Nanoparticle Analyzer, SZ-100). A very dilute dispersion of AgNPs was used for DLS and surface charge (zeta potential) measurements. Additionally, the capping polyphenols of the synthesized AgNPs were investigated by JASCO-FT-IR spectroscopy instrument. A purified, dried AgNPs powder was pelletised with KBr and analysed under FTIR instrument.

The formation of AgNPs is initially confirmed by recording the UV-visible spectrum of the silver nano colloid with the course of time during the reaction. The UV-visible absorption spectrum of the Caffeic acid mediated synthesized AgNPs is shown in Figure 1. The presence of a well-defined surface plasmon resonance absorption peak at 403 nm showed by the prepared colloid indicated the formation of AgNPs. Further, the structure of the AgNPs prepared by using Caffeic acid extract was studied by using XRD analysis. XRD pattern of the AgNPs shown in Figure 2, revealed that the synthesized NPs are found to contain a face cantered cubic (FCC) structure, with diffractions peaks at 2θ of 38.3°, 44.5°, 64.5° and 78.8° with corresponding indexing planes of (1 1 1), (2 0 0), (2 2 0) and (3 1 1) confirm the AgNPs formation (JCPDS File No. 87-0720). 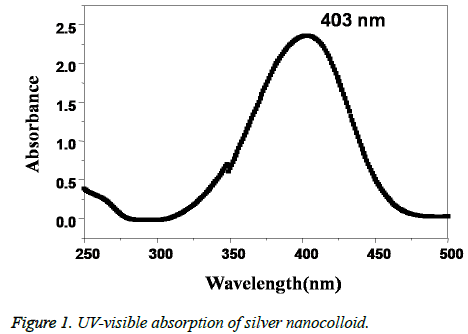 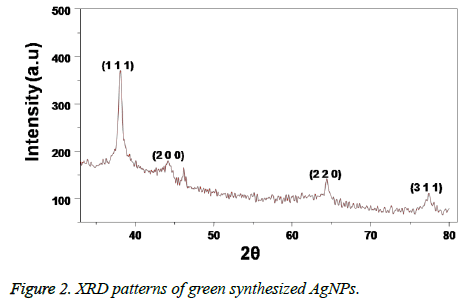 Figures 3A and 3B showed the TEM microscopic images of the synthesized AgNPs. TEM images revealed that AgNPs are polydispersed and spherical in shape with a mean average size of about 10 nm. On the other hand, the SAED pattern revealed the crystalline nature of biosynthesized AgNPs with well distinguished diffraction spots (Figure 3C). Also, the formation of AgNPs was confirmed by elemental analysis. Figure 3D, represented the EDS profile of the plant extract mediated AgNPs, which revealed the presence of strong signals related to elemental silver confirming the formation of AgNPs. The FTIR spectrum of the synthesized AgNPs shown in Figure 4. FTIR spectrum revealed the existence of two major bands at 3455 cm-1 and 1636 cm-1 corresponding to the hydroxyl (OH) stretching and carbonyl (C=O) group stretching vibrations. The size distribution of the prepared AgNPs was shown in Figure 5A. It is found that the average particle size of the NPs is about 10 nm. Further the zeta potential measurements showed that the surface charge of the prepared NPs was -55 mV (Figure 5B). 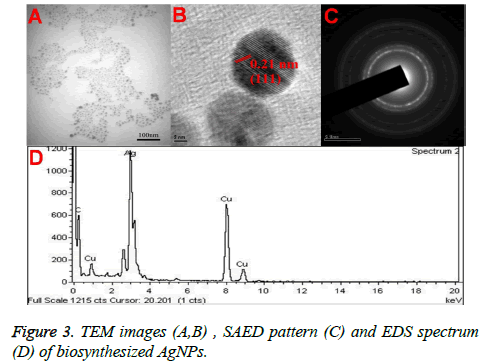 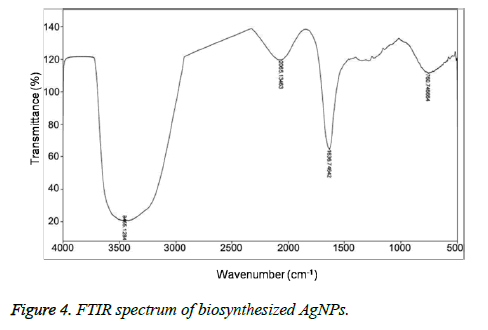 In this work caffeic acid, a naturally occurring polyphenol have been used as a reducing agent for the synthesis of AgNPs. The hydroxyl groups of caffeic acid plays as an important role in the reduction and stabilization of the synthesized AgNPs. The initial formation of silver nanoparticles was confirmed by the visual color change from colorless to thick reddish brown. The intense thick brown colour of the obtained AgNPs is because of the surface plasmon resonance phenomenon of the noble metal nanoparticles which arises due to the collective oscillation of free surface conduction electrons of AgNPs when interacted with electromagnetic field of light [8]. The presence of an SPR absorption peak at 403 nm in the UV-visible absorption spectrum further gave confirmation of the Ag+ to Ag0 conversion.

Further, the formation of AgNPs was also confirmed by XRD, TEM and EDS results. The presence of XRD peaks corresponding to the AgNPs and corresponding indexing planes revealed the crystalline nature of the nanoparticles. Additionally, the average size of the AgNPs was about 10 nm, which was supported by TEM and DLS results. On the other hand, the obtained size of the AgNPs also in agreement with the SPR band obtained at 403 nm, indicating the formation of smaller nanoparticles. It is well known that the SPR band of noble metal nanoparticles varies with the size of the nanoparticles [9]. However, the formation of smaller and spherical NPs gives an added advantage of this method in several biological applications such as bioimaging, drug delivery. For example, smaller nanoparticles can easily pass the cell membrane when compared to the bigger ones. Additionally, the presence of biomolecules on the surface of the prepared NPs may further increase the biocompatibility of the NPs [8].

On the other hand, the presence of bands corresponding to the hydroxyl and carbonyl groups in that FTIR spectrum revealed the capping of the oxidised polyphenols onto the surface of AgNPs. However, the stretching band related to the carbonyl group at 1636 cm-1 further indicated the Involvement of hydroxyl group of caffeic acid in the reduction of Ag+ to Ag0 resulting in the formation of their oxidised quinone forms which later will stabilize the formed silver nuclei [10]. It is well known that the hydroxyl groups of polyphenols donates electron for the reduction of Ag+ and will be converted to their corresponding quinone forms. The subsequently produced oxidised polyphenols will stabilize the readily formed Ag nuclei [11-14]. The stabilization of AgNPs by oxidised caffeic acid molecule is shown in Figure 6. On the other hand the negative zeta potential of NPs also an indication of presence of oxidised polyphenols on the AgNPs surface, which further created the repulsive forces between the neighbouring nanoparticles, leads to the prevention of aggregation of NPs. All these results further indicated the stabilization of the NPs by oxidised Caffeic acid molecules [15]. 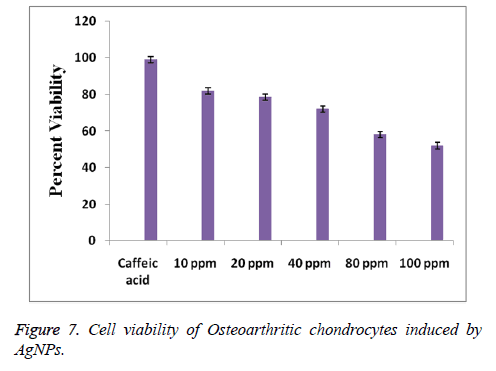 A simple, green and low cost approach for the synthesis of AgNPs by using Caffeic acid is reported in this work. FTIR and zeta potential analysis revealed the stabilization of oxidised caffeic acid molecules onto the AgNPs surface. Caffeic acid capped silver nanoparticles have showed concentration dependant cytotoxicity towards Osteoarthritic chondrocytes. Further, the cytotoxicity of prepared AgNPs opened its scope of therapeutic applications towards osteoarthritis treatment.