Synergistic favorable effect of eicosapentaenoic acid and statin on atherosclerosis

Background and Aims: Combination of Eicosapentaenoic Acid (EPA) and HMG-CoA reductase inhibitor (statin) are known to be an effective therapy for cardiovascular diseases, however, their biological roles in the favorable effect on adverse event have not been studied well. In this study, we aimed to investigate the effect of EPA and statins focusing on plaque formation in a rabbit plaque model.

Methods: Rabbit carotid artery was injured with a balloon followed by feeding with a normal diet for 4 w and then with a high-cholesterol diet for 4 w. The rabbits were either received pitavastatin alone, EPA alone, combination (pitavastatin+EPA) or vehicle (control) for 4 w with a high-cholesterol diet. The injured carotid arteries were harvested and analysed morphometrically and immunohistochemically.

Dyerberg et al. reported that many Inuit is low death rate by myocardial infarction for they consume food which fish oil including omega-3 Polyunsaturated Fatty Acid (PUFA) [1]. After then, 30-year follow-up of the Chicago Western Electric Study reported that it studies indicate secondary prevention effect to reduced risk of total mortality when patient of myocardial infarction many take fish or PUFA. Platelet Aggregation Inhibitor (PAI) is making form PUFA in Eicosapentaenoic Acid (EPA) or Docosahexaenoic Acid (DHA). We use the PAI as highly purified ethyl esterification drug. EPA has effect such as reduce of neutral fat, antiarrhythmic, anti-thrombotic, anti-inflammatory, vasodilation and anti-platelet [2]. HMG-CoA reductase inhibitor (statin) has effect to reduce cholesterol biosynthesis and serum LDL cholesterol in blood, it proved that statin is useful drug as firstly and secondary prevention to coronary heart disease by results of many clinical trials [3-5]. Recently, it attracted a lot of attention that statin has pleiotropic effects except for cholesterol reduce activity. Concretely, statin show improve of intravascular the function, reduction of macrophage activity, anti-inflammatory and anti-oxidant. Those activities seem to explain excellent achievement on clinical trial [6,7]. It reported that HMG-CoA reductase inhibitor and fish oil/PUFA of combination treatment is useful [8,9]. In 2007, the Japan Eicosapentaenoic Acid Lipid Intervention Study (JELIS) reported random and open-label endpoint blind clinical trial by EPA treatment for long period.

The JELIS study says significant reduction in coronary event, it means that the combination treatment has primary and secondly prevention effect [10]. Accordingly JELIS’ report, EPA has different mechanism from statin single treatment to stabilization activity of plaque. The result suggests that it has strongly stabilization activity of plaque by synergism effect with combination treatment. However, the molecular mechanism has still unclear. We established model for plaque transfer stable to unstable state by balloon injury and high cholesterol food to rabbit. The purpose of this study is to elucidate plaque stabilization activity and the molecular mechanism of EPA by model rabbit with statin.

Institutional Animal Care and Use Committee in Osaka Medical College approved all the following research protocols, including the surgical procedures and animal care. Twentyeight male Japanese white rabbits (2.5 to 3.0 kg body weight) were obtained from Kitayama Labes, Nagoya, Japan. Animals were housed at room temperature with a 12 h light-dark cycle and had access to water throughout the experimental period.

Experimental atheromatous plaque was introduced by combination of balloon injury and cholesterol diet as previously reported [11]. Briefly, the rabbit’s right carotid artery was injured by a balloon catheter under anesthetization with pentobarbital. A 2.75 mm PTCA balloon catheter (4 F PCI catheter; Terumo, Tokyo) was introduced into the right external carotid artery and passed three times through the main carotid artery with the balloon distended sufficiently with air to generate slight resistance and the inflation pressures (6 atm) kept constant.

The first 4 w of a normal standard diet and next 8 w of a 0.5% high cholesterol diet (Oriental Yeast Co., Osaka, Japan) were fed. The rabbits were divided into the following 4 groups; 1) vehicle of 1% carboxymethyl-cellulose (1 ml/kg/d, n=7) was administered orally via a gastric tube during the last 4 w. 2) pitavastatin was administered (0.1 mg/kg/d, n=7) in 1% carboxymethyl-cellulose orally during the last 4 weeks. 3) Eicosapentanoic Acid (EPA) was administered (600 mg/kg/d, n=7) in 1% carboxymethyl-cellulose (1 ml/kg/d) orally during the last 4 w. 4) Both pitavastatin (0.1 mg/kg/d) and EPA (600 mg/kg/d) were administered orally during the last 4 w. Blood samples were collected thereafter, and total plasma cholesterol and triglycerides were measured enzymatically (SRL, Inc., Tokyo, Japan). At the end of the protocol, the rabbits were euthanized by an intravenous injection of an overdose of sodium pentobarbital. The carotid arteries were perfusion-fixed with 4% paraformaldehyde, sectioned at 5 mm, fixed again with either 4% paraformaldehyde and embedded in paraffin. For immunohistochemical analysis with antibodies for NF-kB and PPAR-α, carotid arteries were harvested on day 7 after the treatments following the same protocol as described above.

Paraffin-embedded tissues were sectioned at 3 μm and visualized by hematoxylin/eosin staining. Some sections were analysed immunohistochemically using a labeled streptavidinbiotin system. Antigen retrieval by heating in Target Retrieval Solution (code No. S3307, Dako Cytomation, Glostrup, Denmark) was added to the procedure to visualized TF.

Blood was collected from the femoral artery under general anesthesia when the rabbits were injured and from the ear artery when they were sacrificed. The serum total cholesterol and triglyceride levels were measured with a Hitachi 7180 auto-analyzer using reagents (Wako Pure Chemical Industries, Osaka, Japan).

Table 1. Lipid profiles in each group. 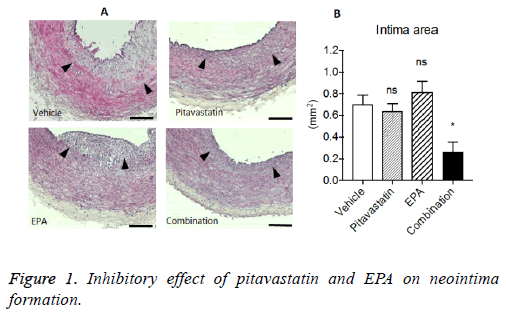 Figure 1: Inhibitory effect of pitavastatin and EPA on neointima formation. 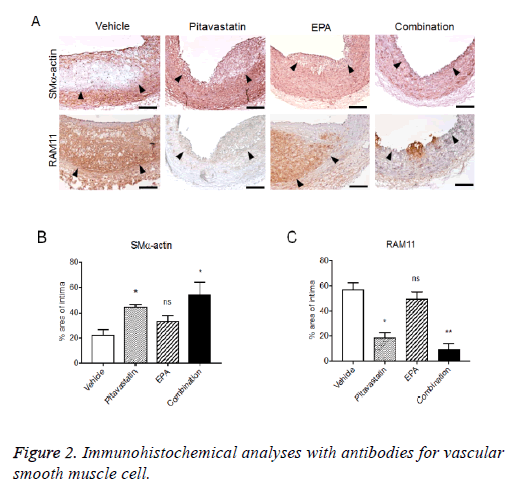 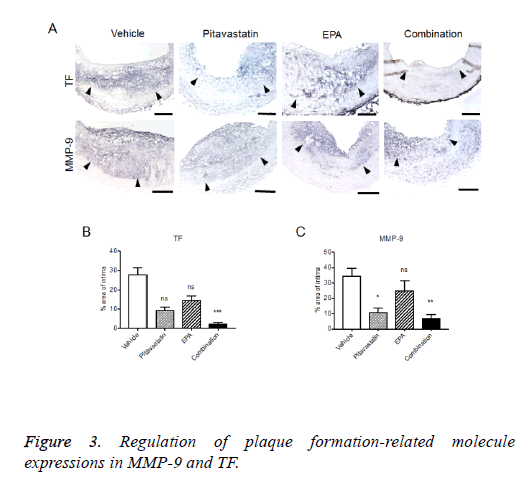 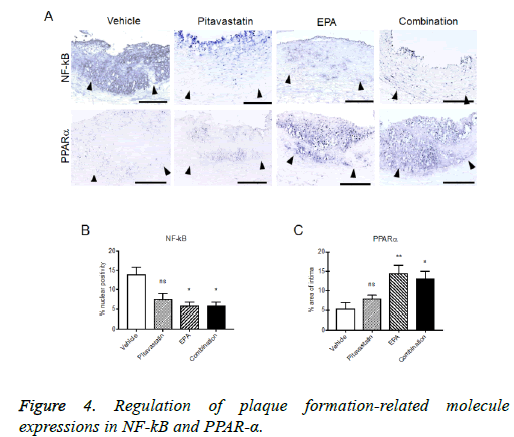 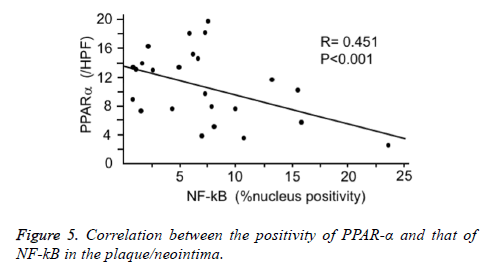 Figure 5: Correlation between the positivity of PPAR-α and that of NF-kB in the plaque/neointima.

Table 2. Summary of results from each model.

In the present study, we examined the effect of EPA, pitavastatin, and the combination of EPA and pitavastatin on atherosclerotic plaque/neointima formation histologically using a rabbit carotid balloon injury model with high-cholesterol diet, which we recently developed for investigating atherosclerotic lesion (plaque) [11].

One of the major reasons of Acute Coronary Syndrome (ACS) is known to be rupture of unstable plaque in atherosclerotic lesion. The unstable plaque has thin fibrous cap which is compose of extracellular matrix such as VSMCs and collagen, and the lipid core is under the fibrous cap with many macrophages and lipid. The lipid core is also known to express protease of MMPs and TF secreted from activated foamed VSMCs [12]. The rabbit carotid balloon injury model with high-cholesterol diet we used in this study exhibited similar pathological characteristics to human unstable plaque i.e. thin VSMC layer expressing MMP-9 and TF on luminal side (vehicle treatment group).

Indeed, we confirmed that pitavastatin decreased intimal area, perhaps, inhibiting VSMC proliferation and might also modulating phenotypic change from synthetic/dedifferentiation type to contractile/differentiation type. Pitavastatin potently inhibited macrophage infiltration into lipid core resulting in stable plaque formation in our data. Suzuki et al. reported similar result, but it was attributed to lipid-lowering. Since pitavastatin does not affect to serum lipid (total cholesterol, TG) levels when it is administered to animals at low concentration of 0.1 mg/kg/d for short period (4 w), [16], we followed the experimental condition in our study.

Like statins, EPA has also been reported to have a pleiotropic effect such as favorable effect of anti-arrhythmia, antithrombosis, anti-inflammation, vasodilation, and plaque stabilization including serum lipid level-lowering activity, specifically, for triglyceride. Regarding the effect of antiatherosclerosis, a previous report demonstrated that EPA reduced the number of macrophage and made stable fibrous cap with high density of collagen in unstable plaque [17]. Our results also support the findings in the previous report [17] by showing the reduction of macrophage infiltration along with reduced NF-kB expression and increased PPAR-α expression with thick fibrous cap composed of VSMCs in plaque. PPAR-α is known to deeply relate to pathology of hyperlipidemia, diabetes, and obesity. PPAR-α is observed on tissue having high ability of fatty acid catabolism such as liver, kidney, skeletal muscle and brown cell. EPA and fibrates are known as exogenous ligands. The both ligands enhance PPAR-α activity and then promote fatty acid oxidation on liver leading to efficient lipolysis [18]. Apart from the effect of PPAR-α on lipid metabolism, PPAR-α has a direct inhibitory effect on VSMC proliferation by inducing p16INK4a [19] and can induce cell cycle arrest inhibiting Transforming Growth Factor-beta1 (TGF-β1) induction in SMCs [20]. These evidences might relate to a certain mechanistic insight of our findings.

NF-kB is one of the important transcription factors which relate to the regulation of inflammatory cytokine production. An inflammation-related product of Reactive Oxygen Species (ROS) can activate NF-kB followed by gene up-regulation of inflammatory cytokine/chemokine [14]. PPAR-α is reported to be inhibit NF-kB activity interacting with p65 of NF-kB [21]. Sata et al. also reported that EPA treatment suppressed phosphorylation of NF-kB via a PPAR-α activation pathway [22]. Indeed, we found significantly increased expression of PPAR-α and decreased expression of NF-kB in EPA treatment group exhibiting an inverse co-relationship between the expressions of PPAR-α and NF-kB. Although it is known that pitavastatin treatment increase PPAR-α activity and decrease NF-kB activity, our results showed that the effect of pitavasatin treatment alone was not sufficient in terms of antiatherosclerosis.

In conclusion, considering the above findings and interpretation, the combination of pitavastatin and EPA treatment is thought to compensate their weak effectiveness on plaque/neointima formation each other. Namely, pitavastatin which has potent anti-inflammatory effect and mild VSMC inhibitory effect on plaque formation and EPA which has mild anti-inflammatory effect and potent suppressive effect on VSMC activation synergistically exhibited a favorable effect on atherosclerosis. As suggested in clinical study JELIS (Japan EPA Lipid Intervention Study), EPA might have an original pharmacological action on coronary artery event. Nevertheless, our results also suggest that PPAR-α activation in arterial (medial) VSMCs could be one of the major molecular mechanisms for anti-atherosclerotic effect of EPA in combination with statin therapy for cardiovascular diseases.

We thank Mrs. Eiko Kohbayashi for her technical assistance of tissue sectioning and immunohistochemistry.