Results: Results revealed that the effectiveness of Curcumin in rate is less than the antibiotic group but decreased the amount of Helicobacter pylori infection compared to the infected host group. Combined therapy had synergistic effects and caused a more significant reduction in gastrin, IFN-γ, MPO activity and lipid peroxidation compared to mice receiving each monotherapy.

Conclusion: It seems that Curcumin, as a natural complex without any side effects, will receive enough attention in inhibiting the infection proliferation.

Gastrointestinal ulcers or in scientific terms “Ulcer Peptic” had affected humans for centuries and its cause was not clear until recently. In the 1940’s, Dr. A. Stone Freedberg from Harvard Medical University found an unusual spiral bacterium in the stomach of the people with Ulcer Peptic [1,2]. Helicobacter pylori is a gram-negative and spiral bacterium. It also contains urease, catalase, and oxidase which plays a significant role in the pathogenesis of gastritis, peptic ulcers, and neoplasia. Considering its virulence factors (pathogenic factors), which include Urease, moving flagella, adhesion and VacA and Cag A vacuolating Cytotoxins, this bacterium sticks to gastric and duodenal mucosal surface of the stomach and bothers them [1-4]. The proliferation of the mucus of the stomach and duodenal increases the danger of gastric and duodenal ulcer stomach adenocarcinoma. Cag secretion system is the most important virulent factor related to stomach adenocarcinoma. Although Helicobacter pylori was identified and recognized about 20 years ago [2], more than half of the population of the world have been infected to this disease nowadays and about 50000 of annual deaths in the world is because of stomach cancer which are related to Helicobacter pylori. Therefore, early detection of Helicobacter pylori is of significant importance [5-7].

Helicobacter pylori contamination is higher in developing countries particularly those with lower ages. In these countries, the incidence of infection by age 10 is 60-50%, and in adults is more than 90% [8]. Several reports have been made concerning the negative impact of Helicobacter pylori infection on the development of the children indicating a daily increase in the number [9]. Turmeric is a medical plant which is widely used as edible seasoning from its rhizome. Rhizome extract is called curcuminoid and it includes curcumin, dimetixocorquine and dimetixine curcumin base [10]. Curcumin is insoluble in water and ether but dissolves in alcohol, acetic acid, alkaline and some oils, including olive oil. Due to its many properties in biological systems, extensive research has been made on it. As it can be seen, antioxidant and antioxidant effects have been shown to inhibit 5-lipoxygenase and reduced levels of cytokines such as TNF-α, IL-1β, and interferon-gamma [11]. Curcumin also has an inhibitory effect on apoptosis with TGF- β and Caspase-3. Various studies have shown that curcumin has protective effects against functional disorders, tissue damage, oxidative stress, and inflammation associated with ischemia. According to recent reports, oral administration of curcumin has significantly reduced pro-inflammatory factors as well as apoptosis in renal tissue following ischemic/rehepatoplasty and also showed that pretreatment with curcumin reduced tissue damage and inflammation of the kidneys following half an hour of ischemia and 24 h of re-blood transfusion in mice. Recently, clinical applications have also been reported for curcumin. Some of the most important diseases in which curcumin is being used against are rheumatoid arthritis, post-surgical inflammation, idiopathic orbit inflammation, Alzheimer's disease and multiple myeloma, and pancreatic and colon cancers [12,13]. The present study was organized regarding the mentioned cases, and considering that no studies have been done on the effects of curcumin on the improvement of symptoms and reduction of Helicobacter pylori survival.

This study is considered to be an experimental study. It consists of 50 Balb/c mice which were randomly divided into 5 groups of 10. Helicobacter pylori strains were isolated from Iranian patients with gastrointestinal disorders who referred to endoscopic centers. The strains were cultured on Brucella-agar plates containing 7-5% sheep blood and related antibiotics and heated under microwave oven conditions at 37°C for 7 to 5 days. The isolated Helicobacter pylori strains were identified based on colony forms, hot staining, urease production, catalase, and oxidase enzymes. Plates containing Helicobacter pylori were diluted, washed, and inoculated into three doses containing CFU 109 into the stomach of rats through polyethylene tubes. Two weeks after the infection, rats were treated with curcumin and antibiotics for 2 weeks. Then, in the fifth week, the mice were subjected to blood sampling for serum isolation to determine IgG and IgM antibodies against Helicobacter pylori and then, they died of spinal cord injury and several biopsies were conducted in the stomach of controlled ones, infected ones and the treated ones and were evaluated to determine the presence of bacteria through rapid test of urease and cyst.

For rats with positive urease test, the tissue culture was performed. The experimental design and study groups were as follows:

Group 1 (negative control): 10 healthy mice that received oral PBS buffer from the third week of the study for 2 weeks.

Group 2 (positive control): Included 10 mice that Helicobacter pylori was transferred to their stomach through the gavage tube and received PBS buffer from the third week of the study for 2 weeks.

The serum samples of the animal were collected and the levels of IFN-γ, IL-4, somatostatin, and gastrin were determined by ELISA according to the manufacturer’s instructions [11].

Gastric mucosal tissues were scrapped and homogenized in 10 mmol/L Tris buffer (pH 7.4). Lipid peroxide levels were measured based on a thiobarbituric acid assay as previously demonstrated [14].

Evaluation of MPO activity in the gastric mucosal tissues

SPSS21 software and one-way ANOVA were used for statistical analysis of data and Excel software was used for plotting the graphs of means ± SD. P<0.05 was considered as a significant level. 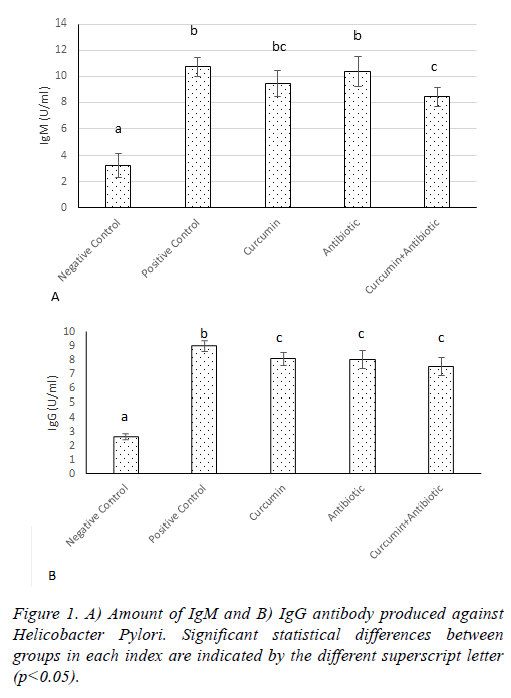 Figure 1: A) Amount of IgM and B) IgG antibody produced against Helicobacter Pylori. Significant statistical differences between groups in each index are indicated by the different superscript letter (p<0.05).

Figure 2: A) Amount of INF-γ; B) Somatostatin; C) Gastrin; D) IL-4 produced in serum. Significant statistical differences between groups in each index are indicated by the different superscript letter (p<0.05).

Results of MPO and LPO measurement indicated that MPO activity and lipid peroxidation were significantly increased (p<0.05) in positive control group compared to negative ones. Antibiotic, curcumin (with less intensity) and curcumin +antibiotic therapy could significantly decrease (p<0.05) these items than the positive group. Although combined therapy has synergistic effects and caused more significant suppression in the levels of MPO activity and lipid peroxidation (LPO) compared to mice that each received monotherapy (Figures 3 and 4). 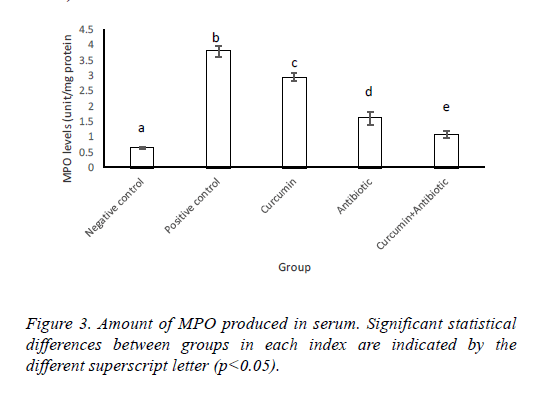 Figure 3: Amount of MPO produced in serum. Significant statistical differences between groups in each index are indicated by the different superscript letter (p<0.05). 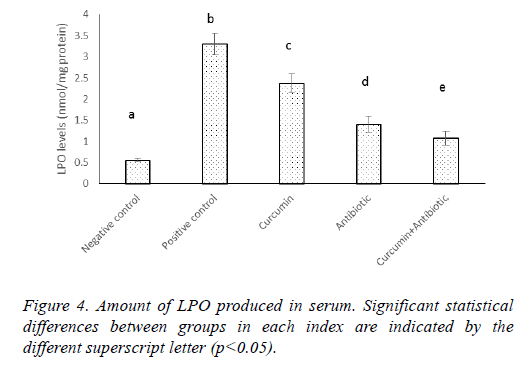 Figure 4: Amount of LPO produced in serum. Significant statistical differences between groups in each index are indicated by the different superscript letter (p<0.05).

Several drugs were evaluated for the treatment of Helicobacter pylori infection, and no drug alone was effective in treating this micro-organism. What is considered appropriate for Helicobacter pylori treatment in metronidazole triple therapy, tetracycline and bismuth, which is not costly, but has a series of side effects such as oral metallic taste due to metronidazole and increased sensitivity to light in the effect taking tetracycline and other complications such as gray-colored intermittent oral and dental pains, constipation, diarrhea and stool colon [18-20]. Several studies carried out in various fields such as biotechnology, pharmacognosy, drug chemistry and etc., in order to find new drugs to influence on this infection, among which special attention has been paid to medicinal plants. One of these medicinal plants is turmeric. It has been used in ancient Asian medicine for the treatment of skin diseases and wound healing. For example, in India, it was rubbed on infectious wounds and healed it by destroying the bacterial wounds. In new medicine, turmeric, anti-bacterial, antifungal, antimicrobial and antiviral effects have been reported [21]. For example, its alcoholic extract was effective on gram-positive bacterium in vitro. Turmeric strongly affects Salmonella but is not effective on E. coli [22]. It has been reported in the study that the active ingredient (curcumin) of this plant is effective on the HIV virus, where selected drugs have not been effective for this disease. There are also reports on the effect of Turmeric ether and Ethel on Staphylococcus and Klebsiella pneumonia [22-24].

In a study by Tyagi et al. entitled “Anti-bacterial effects of curcumin on bacterial membrane damage” they reported that the antioxidant effects on gram-positive bacteria, including Staphylococcus aureus and Enterococcus feces, and also Gramnegative bacteria including Pseudomonas aerogenosa and Ocala, which are important human pathogens, inhibit their growth, and eventually suggested that the antibiotic potential of curcumin should be studied further [25]. In the recently study in Turkey, Hayatay et al. reviewed the extent of curcumin inhibition with common antibiotics in bacterial infections. They showed that curcumin should be used at high concentrations in order to maintain its inhibitory strength by inhibiting other antibiotics [26]. Kali et al. reported that curcumin had an inhibitory effect on biofilm-producing bacteria when used with antibiotics. They also stated that the use of this substance would be beneficial in antibiotic therapy [27]. In their, other study named Anti-bacterial effects of curcumin on bacteria that contaminated the mouth, Njaah et al. reported that curcumin is effective in preventing decay and biofilm formation, and it is useful to consider it as an alternative method. The results of our study were also in line with the above studies [28].

Because of participation of free radicals in the pathogenesis of Helicobacter gastritis, eliminating these causal inflammatory triggers may be a useful strategy. Interestingly, it is clear that the curcumin possesses antioxidant properties [29]. The levels of lipid peroxidation, an oxidative damage index, and MPO activity, among factors causing the lipid peroxidation, were decreased by the treatment with combined curcumin and erythromycin. In some cases, it almost reached the levels found in non-infected animals. Therefore, some of the beneficial effects reported in combination therapy may be due to the potent antioxidant properties of curcumin. ELISA assays were performed to investigate the mechanism of synergistic benefits of combined therapy. Similar to current result, it has been reported that the levels of IFN-γ as a potent inflammatory cytokine was increased by H. pylori infection [30]. Attained data showed that curcumin (by direct anti-inflammatory and anti-microbial effects) and erythromycin (by decreasing the agent's induced inflammation), could regress the levels of cytokine. More importantly, combined therapy has synergistic beneficial effects in decreasing cytokine.

IL-4 is a prominent anti-inflammatory cytokine. It is reported that the production IL-4 is suppressed by H. pylori [31]. On the other hand, somatostatin is a regulatory hormone needed for IL-4 mediated resolution of H. pylori-related [32]. A significant benefit of combined therapy on IL-4 more profound than single therapy alone suggested that combined therapy could reduce the effects of H. pylori infection more than each therapy alone. Gastrin is a hormone produced by G cells from the antrum and involved in the production of gastric acid [33]. Similar to current result, it is clear the levels of gastrin and gastric acid were increased by H. pylori infection. Our results showed that combined therapy could reduce production of gastrin more profound than each monotherapy alone.