Introduction: Eccrine spiradenoma was described in 1956 by Kersting and Helwig who designated eccrine spiradenoma as a benign dermal neoplasm derived from the eccrine sweat glands [1]. An infrequent, exceptional neoplasm, eccrine spiradenoma principally cogitates as a solitary, intra-dermal, painful nodule. The neoplasm is considered to originate from the cutaneous sweat glands with a concomitant, focal apocrine differentiation. The disorder is occasionally exemplified by multiple tumours. Frequent sites delineated with eccrine spiradenoma are the chest and face. Infrequently, lumps can be delineated across the forearm, eyelids or the joints, particularly the elbow. The tender nodules display a gradual evolution with amplifying magnitude [1].

The eyelids display infrequent tumours of the sweat apparatus configuring altered morphology. The sweat glands depict two distinct histological subdivisions, termed as eccrine and apocrine. Eccrine glands articulate a universal presence within the skin with abundance on palms, soles and axillae. The eccrine component also appears in uncommon locations such as the perimeter and dermal surface of the eyelids. The apocrine glands are restricted within the axillae, ano-genital region, surrounding the nipples and a limited number on the abdomen and chest. Apart from the aforementioned sites, modified sweat glands are cogitated in the eyelids (Moll's glands), breast (mammary glands) and external ear canal (ceruminous glands) [2].

Eccrine spiradenoma appears on any location and an estimated 20% instances arise in the extremities. Lesions characteristically enunciate solitary nodules of around 1cm magnitude, especially on the superior or ventral torso though the tumefaction can exemplify multiple tumours. The age of emergence of eccrine spiradenoma is unspecified although it commonly arises betwixt 15 years to 35 years and lacks a gender predominance [2,3].

Eccrine spiradenoma usually configures benign tumours of the skin located at the site of eccrine sweat glands. Eccrine spiradenoma cogitates a category of painful dermal tumours with the nomenclature of "BLEND AN EGG". The tumour collective is manifest with conditions such as blue rubber bleb nevus, leiomyoma, eccrine spiradenoma, neuroma, dermatofibroma, angiolipoma, neurilemmoma, endometrioma, glomangioma and granular cell tumour. Eccrine spiradenoma can be confused for a glomus lesion or angioleiomyoma on account of the pain and florid vascularisation of the lesion. Pain described within eccrine spiradenoma is cogent to the appearance of tiny, un-myelinated axons interspersed within the connective tissue enveloping the tumour or on account of the expanding tumour nodule. In contrast, pain which arises from an adenoid cystic carcinoma is contingent to foci of perineural invasion with concomitant tumour infiltration [2,3]. Sweat gland tumours can be categorized into four distinct categories: hamartoma, adenoma, benign epithelioma and primary epithelioma - a classification devoid of the incriminated segment of the sweat apparatus.

Sweat gland tumours can alternatively be divided two subtypes: ductal (syringal) and glandular- which are further seggregated into tumours with eccrine or apocrine differentiation [3,4]. Eccrine spiradenoma is categorized within the category of benign epithelioma with a ductal genesis. It can also adopt a nomenclature of lobular syringoma. Eccrine spiradenoma is described as a tumour of sweat glands exhibiting an eccrine differentiation. Spiradenoma is of an eccrine, sweat gland genesis, a fact that is entrenched in previous descriptions [4,5]. Thus a spiradenoma is comprehensively cogitated as an eccrine spiradenoma. However, it is also cogitated as a follicular, adnexal tumour or as a derivative of the hair follicle bulge, thereby constituting the category of minimally differentiated follicular tumours [6]. An apt clinical, cytological, histological and immune histochemical concordance of the benign lesion is a pre-requisite for appropriately defining the lesion.

The percentage of malignant transformation is miniscule. However, malignant tumours are markedly aggressive and progress to localized or distant metastasis in an estimated 50% instances. Malignant conversion ensues in lesions of extended duration, thus an antecedent and definitive diagnosis is beneficial [3,4].

The tumour is constituted of a solitary, enlarged, encapsulated, well defined lobule. Frequently, several lobules are configured within the dermis, devoid of an epidermal continuity. The tumour lobules are uniformly dispersed and clearly demarcated. Exceptionally, several miniature nodules appear in a pattern simulating a herpes zoster eruption [4,5].

On low magnification, the tumour aggregates appear intensely basophilic on account of the close approximation of nuclei. The epithelial cells within the tumour aggregates are arranged in intertwining cords and strands. The cords appear to enclose miniature, irregular articulations of oedematous connective tissue. The epithelial cells within the cords are configured by a dual cell population. A cellular population is constituted of scant cytoplasm and miniscule, darkly stained nuclei arranged peripherally within the tumour aggregates. Adjunctive cells cogitated within the centric zones of tumour aggregates depict enlarged, pale staining nuclei and a partial circumscription of miniature glandular lumina. The luminal spaces frequently consist of miniature quantities of granular, eosinophilic substance, reactive to periodic acid Schiff's (PAS) stain which is resistant to dissolution with the diastase enzyme. Lobules devoid of luminal spaces can display a rosette like configuration of the cells with lightly stained nuclei. Glycogen is absent or minimal in the tumour cells. Occasionally, a hyaline material can appear within the stroma enclosing the cords of tumour cells. Hyaline material can also arise amidst the cords of tumour cells as hyaline droplets [5,7]. Stroma circumscribing the tumour lobules occasionally depicts lymphoedema with markedly dilated vascular or lymphatic capillaries.

Histological elucidation of the tumour lobules with a dual population of cells generally constitute tumour islands. Clearly defined and well circumscribed lobules and tumour aggregates of basaloid cells are exemplified. Enlarged, pale- staining cells are cohered around empty spaces akin to glandular lumina. Miniature, darker staining cells articulate the periphery of the lobules. In contrast to a cylindroma, tumour lobules of eccrine spiradenoma are devoid of a perimeter of intense basement membrane like substance staining eosinophilic with the periodic acid Schiff's (PAS) stain. The cellular egress sometimes incorporates the entire dermal magnitude in order to extend into the subcutaneous adipose tissue. Stroma interspersed within the tumour lobules can be oedematous with accompanying prominent and dilated blood vessels. An abundance of lymphocytes, predominantly T lymphocytes, appear dispersed within the tumour nodules [5,7]. As a distinctive, dual population of epithelial cells defines the neoplasm with dark staining and pale staining cells, focal zones of squamous differentiation can be elucidated. Malignant degeneration of eccrine spiradenoma generally appears with ancient lesions and is manifest by features such as a rapid growth of the tumour mass, cellular atypia, mitosis and necrosis [7,8].

Spiradenocarcinoma can be appropriately designated when emerging in conjunction with foci of a benign, residual component. 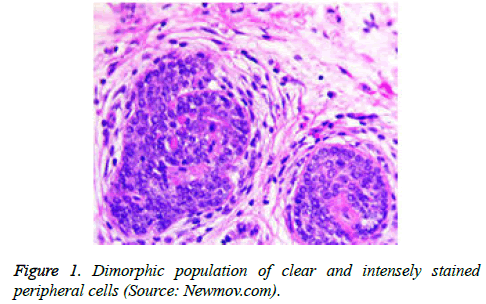 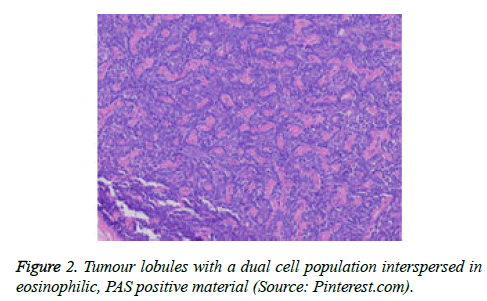 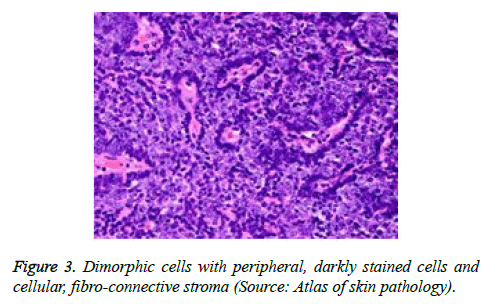 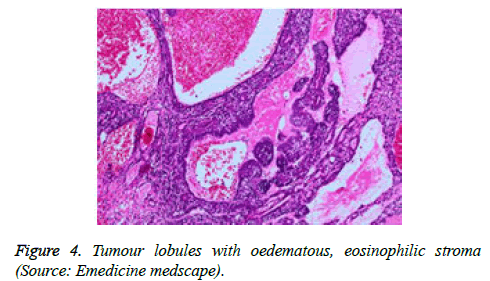 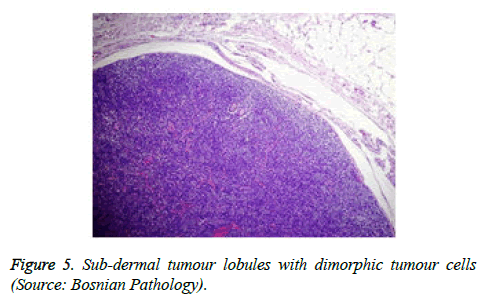 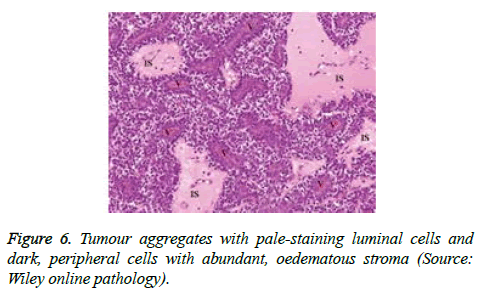 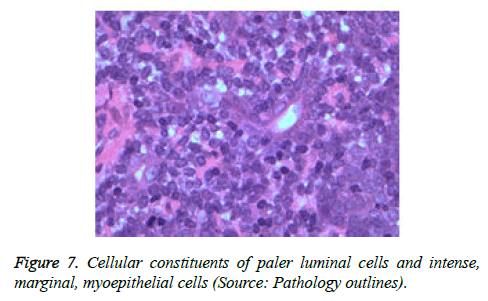 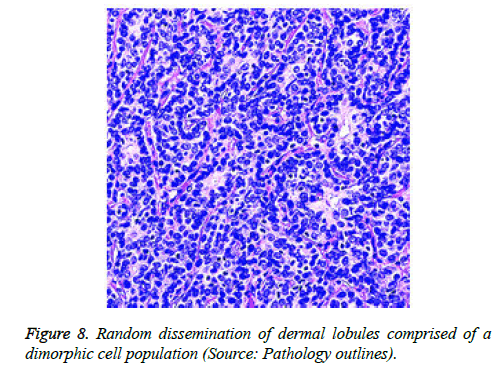 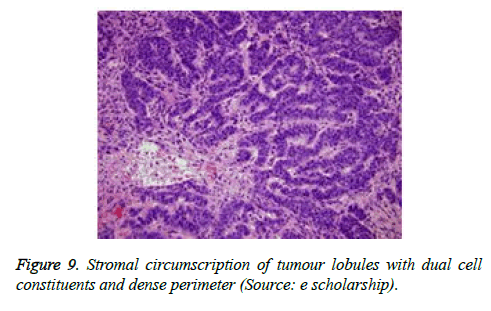 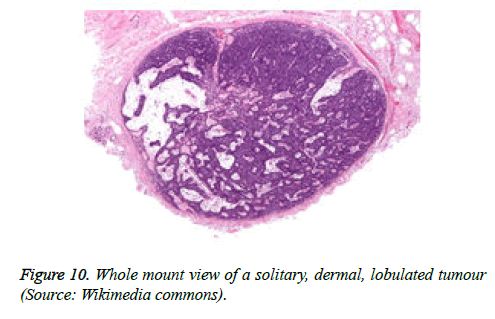 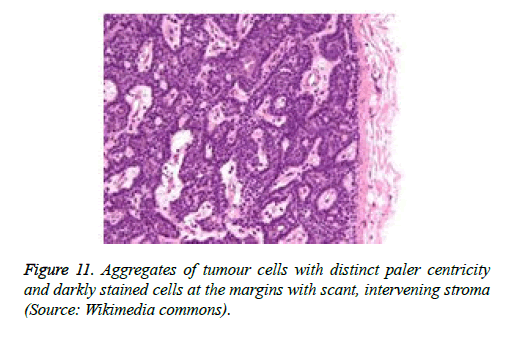 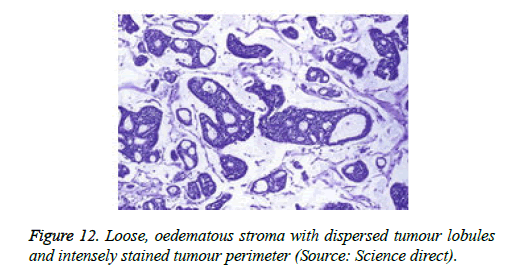 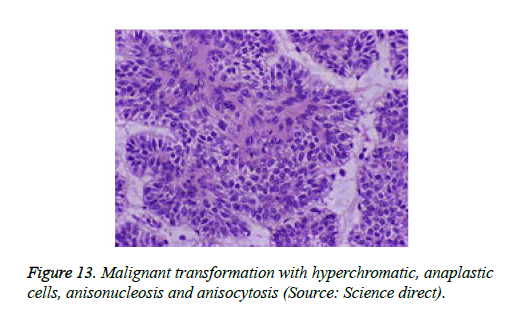 The biochemical elucidation of normal sweat apparatus is not categorically apparent or applicable to the neoplasm. Enzymes such as amylophosphorylase, branching enzyme, succinic dehydrogenase, diphosphopyridine nucleotide and leucine aminopeptidase are characteristic of eccrine ducts and glands whereas enzymes such as acid phosphatase and β glucuronidase are manifest by the apocrine glands. Eccrine origin of the tumour can be confirmed on electron microscopy [3-5]

On Fine needle aspiration cytology (FNAC) uniform, cuboidal cells enunciating a minimal amount of cytoplasm, round to oval bland nuclei with indistinct nucleoli are cogitated. The tumour cells configure cohesive aggregates and multi-layered clusters. Numerous eosinophilic globules are demonstrated, enveloped by tumour cells, thereby enunciating specific articulations of the pseudo-rosette type. Disseminated, naked nuclei commingled with spindle shaped myoepithelial cells can be admixed with an intense lymphocytic infiltrate. The aforementioned features demarcate the cytology of the tumour from adjunctive eccrine tumours. Eccrine spiradenoma can mimic an adenoid cystic carcinoma on cytology as the tumours are focally constituted of hyaline globules [2,3].

A primary basal cell epithelioma with eccrine differentiation and a lobular, hyalinised syringoma (cylindroma) are conditions which are a pre-requisite for the histological differential diagnosis of eccrine spiradenoma. A basal cell epithelioma displays a margin of basal cells with a neat, radial configuration [8,9]. It recapitulates the inferior layer of normal epidermis with vertically articulated basal cells. A cylindroma is characterized by prominent, hyalinised bands of collagen enveloping and intertwining amidst the tumour lobules and cellular constituents [8,9]. Eccrine spiradenoma enunciates compressed tumour lobules of varying dimensions with sharp basophilia. The dual category of tumour cells- cohesive, lightly stained and adjunctive compact, intensely stained, peripheral nuclei are distinctly discernible [10,11].

Therapeutic strategy of managing tumours such as eccrine spiradenoma is not well delineated. Surgical excision remains the therapeutic option of choice with minimal incidence of reoccurrences.