Survival of patients with advanced NSCLC treated with first-generation EGFR-TKIs at a cancer hospital in Thailand, 2011-2016.

Apparently, the clinical efficacy of Epidermal Growth Factor Receptor-Tyrosine Kinase Inhibitors (EGFR-TKIs) in patients harbouring an EGFR mutation was proved by a lot of pivotal trials [3-9,14-16] showed in Table 1. At the beginning, a few prestigious studies [3-4] revealed that clinical features of patients (eg. non-smokers and adenocarcinoma) were not good enough to indentify the proper of them for front-line therapy with EGFR-TKIs. In other words, only patients with EGFR sensitizing mutation gained benefit from EGFR-TKIs, while those with EGFR wild type had detrimental effects in terms of Overall Response Rate (ORR) and progression free survival when compared with chemotherapy. Later studies [5-9] choosing EGFR mutated patients hammered such both of the superiorities of EGFR-TKIs over chemotherapies, and could provide median overall survivals to 19-34 months, however no difference of survival time was found between both arms due to high crossover rates.

The researcher retrospectively reviewed medical records of patients with NSCLC stage IIIB –IV according to International Union Against Cancer (seventh edition) [27], confirmed by histology including an imaging and treated with EGFR- TKIs in CCH during January, 2011 to December, 2016. All patients were followed up until December 31, 2017. A status of the patient at the cut-off time was taken from the medical record and registration information, Ministry of Interior, Thailand. This study was approved by Ethics committee of CCH.

Sixty-four medical records of patients were reviewed. Among them, fourteen were excluded; fifty patients fulfilled our criteria to include in this study (Figure 1). 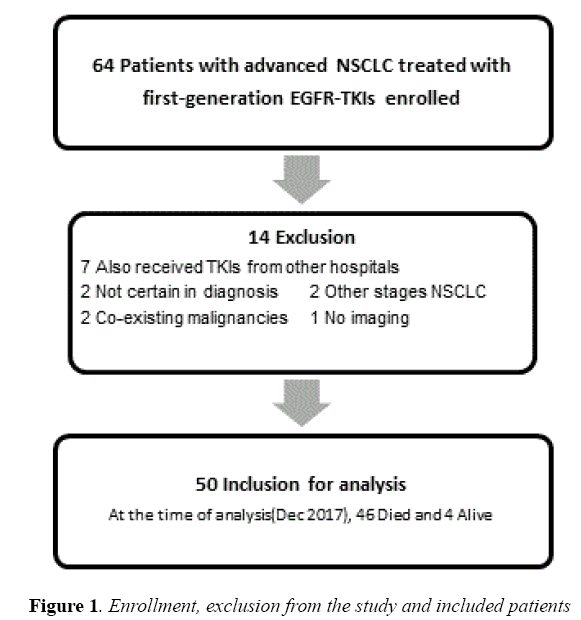 Figure 1: Enrollment, exclusion from the study and included patients

Regarding EGFR mutation status, eleven patients (22%) harboured EGFR sensitizing- mutation, nine of whom were exon 19 mutations, one of whom was exon 21 mutation, and the last one of whom was combined exon 19+21 mutation. While thirty-three patients (66%) remained EGFR unknown and the others (12%) had EGFR wild-type, respectively.

Interestingly, six patients with EGFR wild-type received an EGFR-TKI, three of whom received it during waiting for EGFR testing results and were stopped after the result showed EGFR wild-type, while the other three received it continuously until disease progression or death.

As for EGFR unknown, the reasons for not to test EGFR status before starting a TKI therapy were (a) treatment by physicians’ or patients’ decision (n=14), (b) no requirement by reimbursement system (n=6), (c) empiric therapy in poor ECOG performance status/critically ill patients (n=6), (d) inadequate tissue specimen or diagnostic cytology (n=4), and combined reasons (c) and (d) (n=3).

Moreover, nine patients received EGFR-TKIs more than one period of treatment time (re-challenge or changing strategy), five of whom received TKIs up to three periods. Four patients also received a second generation EGFR-TKI (such as afatinib) as a changing regimen. The median TTF of nine patients received re-challenge or changing TKIs regimen progressively declined from 5.71 (95% CI, 1.37-16.78) to 3.58 (95% CI, 0.36-13.17) and to 1.74 (95% CI, 1.44-2.85) months in the first-, the second- and the third-period of treatment time, respectively. In the first period of treatment, responses showed partial response (n=6), stable disease (n=2) and progression of disease (n=1).

Forty-six patients died prior to the cut point time - December 31, 2017, with median follow up time of 16.78 months. Four patients were alive. Three of them were receiving different systemic therapies which were docetaxel, gefitinib and osimertinib, while the other one received best supportive care. 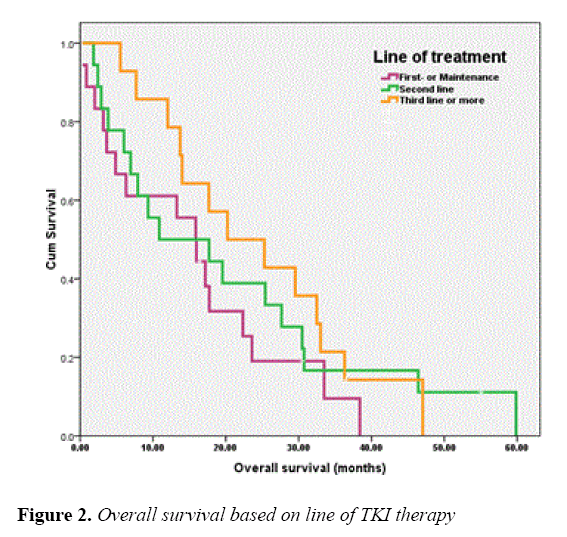 Figure 2: Overall survival based on line of TKI therapy 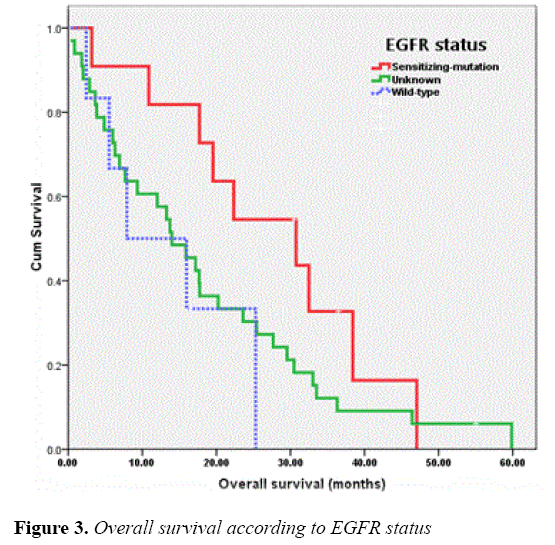 The median OS of patients received EGFR-TKIs as rechallenge or changing strategy was shown in Table 5.

Two and five years overall survival of all patients was 35.4 and 5.2 percent, respectively.

Univariate analysis results analyzed by Kaplan-Meier in the Table 5 showed that age group less than 70 year-old, nonsmoking, the way to access to an EGFR-TKI, ECOG status 0-1, clinical benefit (partial response or stable disease) from an EGFR-TKI, receiving of EGFR-TKIs re-challenge and receiving chemotherapy were the favorable prognostic factors for the survival. While the other factors: sex, stage, tissue, adenocarcinoma, EGFR status, generic name of TKI, EGFRTKIs line of treatment, radiotherapy, pleural metastasis , lung metastasis, liver metastasis, bone metastasis and brain metastasis did not contribute as prognostic factors.

The significant prognostic factors (p value <0.05) in univariate analysis, including age, smoking, TKI access, ECOG performance status and TKI benefit were further analyzed in Cox-regression model; with the exception for chemotherapy and receiving of EGFR-TKIs re-challenge. As the decision to perform chemotherapy depended on an ECOG performance status and whether the patients received of TKI re-challenge relied on previous TKI benefit and TKI access, for example patients with compassionate use could not easily receive rechallenge TKI. Multivariate analysis data were shown in Table 6.

Cox-regression indicated that current or former smoking (p=0.006), ECOG performance status 2-4 and not available (p<0.001), receiving EGFR-TKIs by payment (p=0.040) or compassionate use (p<0.001) were the poor prognostic factors for the OS.

Considerably, two-third of patients in this study received an EGFR-TKI when their EGFR status was unknown. There were many reasons to explain this phenomenon at that time. First, it was controversial and some clinical evidence suggested using an EGFR-TKI as second-line treatment or more in unselected patients [31-34]. Secondly, although first-line therapy with an EGFR-TKI should be limited to patients harbouring sensitive EGFR mutation [1,2], thanks to high prevalence of an EGFR sensitive mutation with lung adenocarcinoma in Thais [35] , and sometimes in situations had nothing to lose such as a poor performance status or a critically ill patient unsuitable for a chemotherapy, an oncologist and a patient decided to try treating with an EGFR-TKI and closed follow up the clinical outcome in a few weeks later. Thirdly, the reimbursement system accepted the use of an EGFR-TKI as second-line or more regardless of EGFR status at that period of time. Moreover, the number of patient (13%) in this study was diagnosed by tissue cytology with neither cell-block nor liquidbased technique, which was the barrier to perform molecular testing. Lastly, CCH has no in-house molecular testing laboratory and is a regional referral center. Therefore, when an oncologist requested for such the testing, a patient needed to get a tissue sample and brought it to CCH before being sent to another pathology center in Bangkok, which was a time consuming process. During waiting for EGFR mutation testing result, on the basis of clinical selection (such as non-smoker, adenocarcinoma, female), an oncologist might decide to try treating a patient and made a decision again depending on a clinical response or a testing result.

Fortunately, many recent clinical studies [36-38] including meta-analysis [39] indicated that the patients with wild-type gained benefit clinically from chemotherapy rather than an EGFR-TKI. Besides, according to many recent retrospective studies, it was acceptable to perform empiric therapy with an EGFR-TKI based on clinical judgment on poor performance status patients, but finally it would be more accurate and more reasonable to confirm an EGFR status in these patients [40,41]. In addition, the current reimbursement system in Thailand changes the criteria for applying an EGFR-TKI by permitting patients only with an EGFR sensitive mutation to use it as (but not limited to) a first-line therapy. Moreover, a liquid biopsy has become more acceptable and available in Thailand since the end of 2016. Lastly and most importantly, the price of an EGFR-TKI has been decreased from 2,200 Thai-bath (about 71 US dollar)/tablet/day to 600-720 Thai-bath/tablet/day since February 2018.

For these reasons, the authors believe that lung cancer treatment with EGFR-TKIs in Thailand will be improved not only to the right person at the right time, but also to a number of EGFR mutated lung cancer patients. This real-life study emphasizes the crucial role of an EGFR mutation testing before initial treatment with an EGFR-TKI regardless of a line of therapy, prevalence of EGFR mutation in population, or even ECOG performance status of patients.

Median TAT in this study was 5 days consistent with a recommendation of a standard molecular testing guideline [42]. Besides TAT, processing time should be added and considered as waiting time in real world practice especially in a hospital not having in-house molecular testing. As a result, median waiting time in this study was approximately 14 days which was quite long.

As for prognostic factors, like other studies; smoking status [18,21,31,43] and ECOG performance status [18,21,43] had a significant impact on OS in patients receiving an EGFR-TKI. Reported by Okamoto [18] as a significant prognostic factor, age in this study showed a trend to be, but not because of limitation by a small number of patients in the study. Interestingly, this study indicated that access to an EGFR-TKI had an important role in OS; patients received a TKI by a reimbursement was a good prognostic factor compared with those received by an out-of pocket or a compassionate use.

The OS of the patients harbouring EGFR sensitizing-mutation in the present study was comparable to those of landmark phase III trials and those of other real-life reports. In real practice at that time in Thailand, most of the patients still have not been proved their EGFR statuses before starting an EGFRTKI and often received it as a late line therapy.

The authors declared no conflict of interest.

This article does not contain any studies with human participants performed by any of the authors and was approved by Ethics Committee of CCH and its later amendments or comparable ethical standards.

The authors feel grateful and thank to Associate professor Dusit Sujirarat, who kindly provided his suggestion on statistical analysis in this research.