Survey of ermA, ermB, ermC and mecA genes among Staphylococcus aureus isolates isolated from patients admitted to hospitals in Tehran, Iran by PCR and Sequencing

Staphylococcus aureus is one of the gram positive bacteria that has created many problems in treatment. The antibiotic resistance is an important problem and debatable topic in the world. In recent years, because of overuse of antibiotics and transition of resistance genes, frequency of resistant staphylococcal infections, are increasing. Clindamycin inductive resistance causes failure in treatment. The aim of current study is detection of clindamycin inductive resistance S. aureus isolates among patients admitted to Tehran hospitals by multiplex PCR. A total of 80 isolates of S. aureus were collected from hospitalized patients in Tehran. The antibiotic susceptibility tests were applied by MIC and disk diffusion methods. The identification of clindamycin inductive resistance isolates was performed by D-zone test. To detection of ermA, ermB, ermC and mecA genes, multiplex PCR was administrated. In current experiment, among 80 isolates, resistance rate to erythromycin and clindamycin were 70% and 45% respectively. By D-zone test, 15 samples were positive. The frequency of ermA, ermB and ermC genes in S. aureus isolates were 5%, 7.5% and 10% respectively. The results of this study demonstrated that the antibiotic resistance is a main problem in patient’s treatment. By identification of resistant isolates and apply appropriate treatment, can be somewhat prevent from outspread of resistant isolates.

Staphylococcus aureus species are known as human pathogens which cause skin and soft tissue infections, acute septicemia, pneumonia and toxic shock syndrome [1,2]. These organisms are resistant to most of drugs and constant against most of disinfectants agents [3]. Nowadays, antibiotic resistance of S. aureus is a major problem in society [4]. Different types of antibiotic resistance mechanisms have been found in S. aureus that beta-lactamase producing is the most common which associated gene with enzyme production is located on the plasmid. Resistance to nafcillin by mecA gene which is located on chromosome, resistance to vancomycin (vancomycin and nafcillin resistance genes exist in these strains) and plasmid resistance to tetracycline, erythromycin and aminoglycosides are the types of resistance mechanisms [5,6]. Resistance to nafcillin, methicillin and oxacillin is independent from betalactamase producing [7,8]. The methicillin resistant S. aureus (MRSA) is a problem in development of hospital infections. A study has shown that 38.6% of S. aureus which isolated from hospitalized patients in Shariati hospital and Tehran Children’s Medical Center are MRSA isolates [9]. MRSA are resistant to certain types of oxacillin antibiotics (nafcillin, methicillin, oxacillin and cloxacillin) and all of the beta lactam antibiotics such as penicillin, amoxicillin and cephalosporin’s [10]. The Staphylococcus which are resistant to erythromycin show cross-resistance with macrolides (spiramycin, azithromycin and clarithromycin), lincosamides (clindamycin and lincomycin) and type B streptogramin. Increasing of MLS (Macrolide-Lincosamide-Streptogramin) resistant strains in clinical specimens, indicates increasing of clindamycin utilization [11]. Erythromycin and clindamycin are different classes of antibiotics which bind to 50S ribosomal subunit of bacteria and inhibit protein synthesis. In Staphylococcus resistance to these antibiotics is create by methylation of target site on ribosome that mostly related to methylase gene erm (rRNA) [12]. The ermA, ermB and ermC are types of erm gene which discovered in Staphylococcus [12,13]. The ermA as a chromosomal gene is the most common and ermB which is located on plasmid have not found in primates. The frequency of these plasmids (85-98%) increases by use of erythromycin and clindamycin. 95% of acne causing S. aureus isolates which are under influence of clindamycin have ermC gene [4]. Also, resistance to macrolides can occur through efflux which is dependent to mrsA gene, the other resistance mechanism is inactivation of lincosamides by chemical alterations that related to inuA gene that rarely occurred [12,13]. The routine antibiotic susceptibility tests for S. aureus with inducible resistance, demonstrate the resistance to erythromycin and susceptibility to clindamycin. Thus, clindamaycin therapy may be given for erm and mrsA mutants, which ultimately leads to failure in therapy [12]. On the other side, clindamycin is one of the most commonly used antibiotics, especially for treatment of skin and soft tissue infections caused by S. aureus and is a supersede drug in patients with allergies to penicillin [14]. Induced resistance to clindamycin in S. aureus is common which is not detected by routine tests and according to CLSI (Clinical and Laboratory Standards Institute) guidelines, Dzone test is the best method to identity of clindamycin induction resistance [4,15]. For detection of inducible clindamycin resistance, the standard test is D-zone test. In routine antimicrobial susceptibility tests, those which are clindamycin inducible resistance, emerge as erythromycin resistant and clindamycin susceptible [16]. Resistance rate to erythromycin class is so fast, so these medications should not be used alone for the treatment of chronic infections [17]. This test as a simple and reliable test with high sensitivity and specificity, detects clindamycin inductive resistance in clinical laboratories [2]. Placing erythromycin and clindamycin disks at a distance of 15-20 mm from each other and formation of a flat region close to erythromycin disk demonstrates clindamycin inductive resistance which indicates the presence of erm gene [17]. Therefore, providing a useful solution to use the appropriate treatment regimen by determination of the antibiotic resistance pattern in the target population is necessary. The D-zone test can be an acceptable method to identification of clindamycin inductive resistance of S. aureus isolates. The aim of current study is detection of inducible clindamycin resistance S. aureus isolates among patients admitted to Tehran hospitals by multiplex PCR. Also due to cheapness, being simple and importance of inductive resistance detection in effective treatment of S. aureus, is recommended.

In this descriptive study, by referring to the clinical laboratories of the hospitals affiliated to the Shahid Beheshti University of Medical Sciences, the Staphylococcus isolates were collected and transmitted to the Microbiology Lab in Shahid Beheshti University of Medical Sciences. To confirm S. aureus isolates, gram stain, β-hemolysis on blood agar, growth on mannitol salt agar, catalase, coagulase and DNase tests were applied [18]. According to CLSI guidelines (2015), susceptibility of the isolates to erythromycin, clindamycin, oxacillin, trimethoprim, sulfamethoxazole and tetracycline (Mast Co. UK) with disk diffusion method on Mueller Hinton agar (Merck Co. Germany) was performed. S. aureus ATCC25923 was used as a quality control [19]. Determination of MIC (Minimum Inhibitory Concentration) for vancomycin was performed based on CLSI guidelines. S. aureus suspension in BHI (Brain Heart Infusion) broth with 0.5 McFarland concentration was prepared and inoculated on Mueller Hinton agar (Merck Co. Germany). The clindamycin 2 μg and erythromycin 15 μg disks, were placed at a distance of 12 mm from each other and after incubation for 18-24 h in 35°C, preventive zone diameter was measured. D-shaped zone of clindamycin from the side of erythromycin disk was carefully investigated. Extraction of DNA was performed by GeNet Kit (Cat. No. K-3000). To investigate the quality of extracted DNA, in terms of quantity all samples were checked by WPA Bio-wave II Nano spectrophotometer at 260/280 wavelength. Multiplex PCR was performed for ermA, ermB and ermC genes by master mix 2X (Sina Colon Co. Cat. No. PR901638) which included the following instances: 0.4 mmol of each dNTP, 3 mmol MgCl2, 0.08 U/μl Taq-polymerase. The primer sequences for ermA, ermB and ermC genes were as follows respectively: ermA F: AGCGGTAAACCCCTCTGA, ermA R: TTCGCAAATCCCTTCTCAAC with, ermB F: CCGTTTACGAAATTGGAACA GGTAAAGGGC, ermB R: GAATCGAGACTTGAGTGTGC and ermC F: AATTGGCTCAGGAAAAGGGC, ermC R: AAATCGTCAATTCCCGCATG. The PCR product size for ermA, ermB and ermC genes was 190, 360 and 564 bp respectively. The primer sequences were checked by Gene Bank (Blast) and finally the PCR program were as follows: Initial denaturation at 94°C for 5 min for one cycle, secondary denaturation at 94°C for 45 s, the annealing at 58°C for 45 s, the extension at 72°C for 45 s for 36 cycles and final extension at 72°C for 5 min for one cycle. The PCR products were analysed by electrophoresis on 1.5% agarose gel in TBE (Tris- Borate-EDTA), then the gel was stained by ethidium bromide (10.5 μg/ml) afterward the results were checked by Gel Doc in the wavelength of 280 nm.

In this descriptive study, from October 2015 to November 2016, samples collection was performed from patients referred to Tehran hospitals. After identification by biochemical and microbial tests, 80 isolates were approved as S. aureus. 75% of samples belong to males and 25% of them referred to females. 45 of isolates were collected from urine, 10 isolates from wound, 5 isolates from tracheal, 4 isolates from sputum, 10 isolates from blood and 6 isolates from other clinical specimens were collected (Table 1). Among 80 isolates of S. aureus the resistance rate to erythromycin was 70%, to clindamycin was 45%, to tetracycline was 50%, to cotrimoxazole was 35% and 90% were resistant to oxacillin (Figure 1). By MIC and disk diffusion results, all of the isolates were susceptible to vancomycin (Figure 2). The Dzone test results demonstrated 15 isolates were positive phenotypically (Figure 3). Among these isolates 55 of them were MRSA (including mecA gene by PCR) and 45 isolates were methicillin susceptible S. aureus (MSSA) which confirmed by cefoxitin disk diffusion agar. The ermA, ermB and ermC genes were detected in 8 (10%), 6 (7.5%) and 4 (5%) of isolates respectively. Also, 2 isolates had all three genes simultaneously. 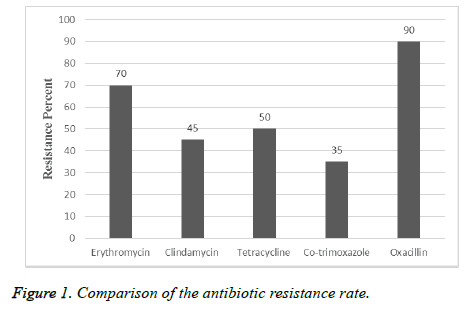 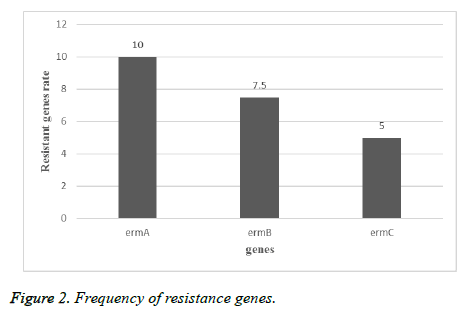 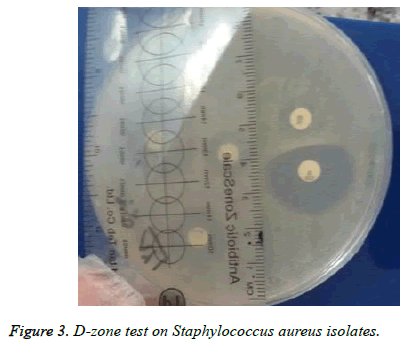 The prevalence of antibiotic resistance in current study has been of concern, therefore control of infections, preventing from dissemination of resistant bacteria, need to have accurate management in drug prescription and identification of resistant isolates. Also due to cheapness, being simple and importance of inductive resistance detection in effective treatment of S. aureus, it’s recommended that this test be performed in laboratory routinely that will prevent from reporting of resistant isolates instead of susceptible isolates.

This study was funded by Research Department of the School of Medicine, Shahid Beheshti University of Medical Sciences (grant No 6049).

The present study was acknowledged by the Ethics Committee of Shahid Beheshti University of Medical Sciences with reference number IR.SBMU.MSP.REC.1396.378.