Successful salvage surgery for traumatic aorto-esophageal fistula in a toddler: An emphasis on "near miss" aspects

The most common cause of AEF in pediatric age group includes an ingested foreign body or a congenital vascular anomaly which has been previously corrected. Commonly ingested foreign bodies implicated in AEF include sharp objects like a fish or chicken bone and button batteries [3-5]. We describe a case in which an uncommon foreign body, the fin of a toy ?baby shark? was ingested. The surgical approach to this emergency using somatic hypothermia is presented here, and the need for a high suspicion of AEF is emphasized if a good outcome is to be achieved.

Aorto-Esophageal Fistula (AEF) is a is well described in adults, but is a rare cause of major gastro-intestinal bleeding in children [1,2]. The most common cause of AEF in pediatric age group includes an ingested foreign body or a congenital vascular anomaly which has been previously corrected. Commonly ingested foreign bodies implicated in AEF include sharp objects like a fish or chicken bone and button batteries [3-5]. We describe a case in which an uncommon foreign body, the fin of a toy “baby shark” was ingested. The surgical approach to this emergency using somatic hypothermia is presented here, and the need for a high suspicion of AEF is emphasized if a good outcome is to be achieved.

A two-year-old previously healthy female patient initially presented to the emergency department with 3 bouts of hematemesis associated with abdominal pain and melena for four days. In her history there was concern for possible ingestion of “crystals” or foreign bodies. Esophago Gastro Duodenoscopy (EGD) revealed a small non-bleeding ulcerative lesion in the mid-esophagus with a normal appearing stomach and duodenum. No foreign body was identified. The patient was discharged home after packed red cell transfusion and was asked to follow up with the treating gastroenterologist as an outpatient. Patient was “asymptomatic” for two days, but on the third day was rushed to the emergency room in hemorrhagic shock with hemoglobin of 4.9 g/dl. A contrast enhanced CT scan of the thorax and abdomen showed focal ulceration of the anterolateral wall of the esophagus at the subcarinal region corresponding to the abnormality seen on EGD, associated with a localized perforation. There was also a pseudo-aneurysm of the thoracic aorta at the level of T4 Figure 1. This was consistent with possible traumatic AEF. 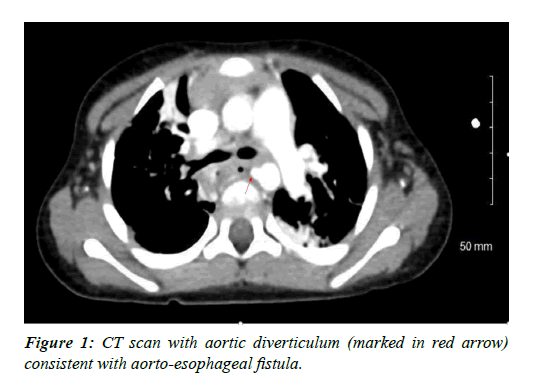 The patient was emergently taken to the operating room by cardiovascular surgery. Her initial core temperature was 37.2 degrees Centigrade. Anticipating the need for aortic crossclamping, the patient was placed on a cooling blanket, given an intravenous dose of solumedrol (5 mg/kg), and her entire body was wiped down several times with alcohol to expedite core cooling to a rectal temperature of 34.5 degrees Celsius, in anticipation of aortic crass-clamping in order to control the fistula without cardiopulmonary bypass. A posterolateral thoracotomy was done and the ligamentum arteriosum divided to gain better access to the inflammatory mass surrounding the aorta. Intrathoracic topical hypothermia over the spine was not used. A dense inflammatory mass surrounded the aorta and esophagus just below the level of the ligamentum arteriosum.

Tapes were placed around the aorta proximal and distal to the suspected fistula. The aorta was clamped and divided for 17 minutes. The patient was not heparinized. The aortic wall including the fistula was circumferentially excised; the linear esophageal laceration at the area of the AEF was repaired with interrupted 5/0 polypropylene sutures. The mobilized aorta was re-approximated with a running 5/0 polypropylene suture. A dose of sodium bicarbonate (1 mEq/kg) was given intravenously prior to releasing the clamps. Finally, a PTFE membrane was wrapped around the aorta, separating it from the repaired esophagus. A foreign body resembling a toy shark fin was recovered from the inflammatory mass surrounding the pseudoaneurysm during esophageal dissection. Blood loss during the surgery was negligible. The patient had an uneventful convalescence. She was placed on a fluid diet for 5 days postoperatively, remains asymptomatic without any gradient across the area of aortic resection several months later. The parents later identified baby shark toy without a dorsal fin, which the toddler had apparently chewed off causing the AEF.

Although traumatic AEF are well described in adults secondary to thoracic aortic aneurysms, tuberculosis and carcinoma, it is a rare cause of massive gastrointestinal bleeding in young children [5-9] In children it is most often related to foreign body ingestion [10-14], and is commonly fatal or associated with significant postoperative neurological impairment [13,15,16]. The ‘near miss’ scenario presented here has been recently emphasized, [17] and need for a high index of suspicion for AEF is again stressed in this manuscript-expeditious CT scan imaging followed by emergent surgery is of paramount importance.

The classical clinical scenario described by Chiari in 1914 consists of mid-thoracic pain, a symptom free period, and then a small sentinel gastrointestinal hemorrhage, followed by an exsanguinating hemorrhage symptom is often present. A high index of suspicion is important when children present with unexplained hematemesis, and prompt diagnosis with CT scan and treatment is necessary if the patient is to survive. Although several reviews of the incidence and management of AEF have been published, these generally relate to the adult population and only sporadic case reports of successful management in children could be found in the literature. Indeed, in a recent review by Kelly, only survivors could be documented and these were mostly adults, often managed with the use of cardiopulmonary bypass.

In the pediatric literature, the few successful repairs were mostly often accomplished with deep hypothermic circulatory arrest and/or cardiopulmonary bypass. The surgical dilemma is an actively hemorrhaging toddler who is often febrile and who has not developed aortic collateral arteries which would allow safe clamping of the thoracic aorta without significant risk of spinal cord injury. The use of topical somatic hypothermia to effect core cooling as an adjunct to aortic cross-clamping in the context of toddler with aorto-esophageal fistula has not previously been described. Avoiding cross-clamping the aorta in a normothermic or pyrexial patient is vitally important to minimizing the risk of spinal cord injury. Mobilizing the aorta and doing an end-to-end anastomosis using mild hypothermia, as is done in coarctation repairs, is preferable to placing an interposition graft in an infected surgical field.

Our case is unique in terms of the foreign body retrieved and implicated as the cause of AEF. However, more importantly it emphasizes the expedient surgical approach with the use of somatic hypothermia which is best undertaken by surgeons familiar with the nuances of cardiac and vascular surgery in the pediatric population. A high clinical suspicion, prompt resuscitation and emergent surgery without unnecessary investigations are the key to the successful outcome in patients with a condition that is most often fatal.