Study on the preparation of spectral standard samples for cathode copper

Spectral cathode copper standard samples were prepared in the intermediate frequency induction furnace by adding necessary additives into 5N-level cathode copper. The manufacturing process, including design of the component, selection of raw materials, characterization of homogeneity, analysis of standards, statistical treatment of data and confirmation of values and standards deviation are presented in this manuscript. The effects of the preparation technological parameters on the sample variance were studied and the optimal processing conditions were obtained as follows: the casting temperature is 1200°C, the stirring rate is 120 rpm, the stirring time is 1 min, the heat preservation period is 25 min and argon dosage is 0.4 m3/kg. The spectral standard sample for cathode copper obtained under these conditions has a preferred orientation on the (220) plane and has been approved as a national level standard sample (No. GSB 04-2707-2011) by China National Standard Sample Technical Committee due to its compact and uniform structure, good stability, high accuracy and reliability.

Cathode copper is playing a very important role in chemical industry, defense industry and the construction industry [1-4], for example highly purified copper is widely used in network connection wires, electric vacuum components and superconductors. Thus it is a great challenge and urgent to get highquality cathode copper, especially in the field of accurately detecting the chemical composition of the cathode copper [5-9]. The emission spectrometry method is an effective way to detect the chemical components of the cathode copper [10-15], using the cathode standard samples as the standard substance. While the preparation of the standard samples is a very complex process, we need to add 18 kinds of impuritys elements including volatile and oxidable Cd and Zn, easily-loss elements such as Si, Zn and Mn and high melting point elements such as Ni and Fe. The content of every kinds of element should be in consistent with the designed value and distributed evenly, what’s more, the materials adding time, melting condition and materials adding order are also important factors that should be taken into consideration. Thus it is a very difficult process to prepare the standard samples.

Copper electrolysis refining method is a method using anodic copper (impurity: 99.0%~ 99.8%) casted into anode plates, pure copper as cathode, and the aqueous of sulfuric acid and cupric sulfate as electrolyte. Under the effect of direct current (dc), the anode copper and the potential negative base metals are dissolved into the solution, while precious metals and some insoluble metals turn into anode slime and sink in the bottom of the cell. As the electrolysis continues, copper in the solution preferentially electrodeposits on the cathode, and then more than 99.99% of high purity cathode copper could be obtained [6,16-17]. And other potential negative metals won’t be electrodeposited at the cathode in the electrolyte, thus can only be removed from the base by purification on a regular basis [18-21]. In the past years, the cathode copper standard sample must be from foreign imports with no authorities recognized. The preparation of cathode copper spectrum standard samples is seldom reported in domestic and foreign countries. On this basis, we apply to the national standard sample committee for project. Through the chemical composition design, material selection, the determination of optimum condition of the examination of the smelting, processing and evenness, the constant value and so on, we finally successfully developed cathode copper spectrum standard samples. This standard sample has reasonable chemical composition design, good uniformity and accurate fixed value. The standard sample has been approved by the national standard sample technical committee as the national standard samples with a standard number is GSB 04-2707-2011, and was awarded the national invention patent with patent number ZL 2013 1 0489178.2.

According to the rule in "Working guidelines for standard sample" (GB/T15000) [22] and “technical specifications of standard samples used in the field of non-ferrous metal products analysis(YS/T409-1998) [23], the component design should cover and adapt to the technical conditions of products, meet the requirements of the analysis. After researching the national standard grades [24] of cathode copper and investigating the user's actual demand, we designed the chemical composition of the cathode copper standard samples with 18 species of selected elements content ranging from 0.0001% to 0.008% gradient distribution.

The main material for the standard sample was high-pure copper with purity of 99.999 wt.%, and other given impurity elements with a purity of more than 99.99%, and the P was added by adding P2O5.with purity higher than 98.5%.

The cathode copper sample was prepared by the following two steps: (1) Preparation of copper master alloys. After oven operation, the high-pure copper was added and the charcoal was covered, and then the furnace temperature was elevated to the pre-set temperature. After this, 18 kinds of impurity elements were added in groups, the argon gas was introduced as shielding gas, and continuous stirring was kept until the form of copper alloys. (2) Prepare copper standard samples. Number them from 1 to 5. The amount of copper alloy was calculated according to the designed dosage of standard sample, then was added in group to the pure copper according to the experimental conditions, taking them out after melting, natural cooling, then processed them into standard samples, after examination of the homogeneity, setting value, then qualified cathode copper standard sample can be got. The preparation process was showed in Figure 1. 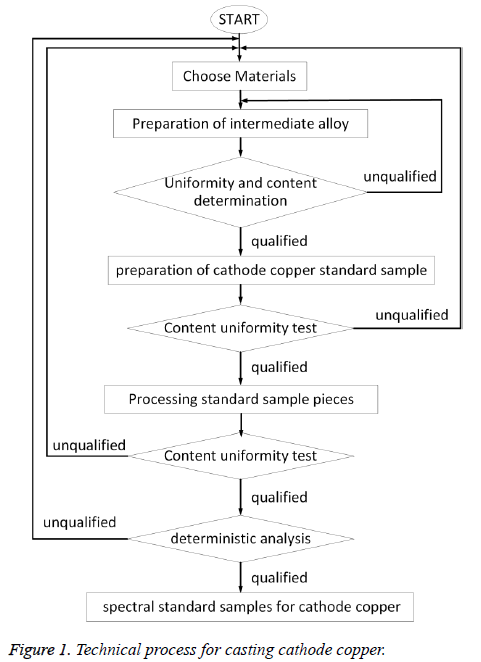 The cathode copper standard samples prepared in Step 2.3 was analyzed by X-ray diffract meter system (XRD, D8 Advance, German Brux) to test its crystal index, and the scanning electron microscope (SEM, JSM-5601LV, Japan) was used to observe the surface topography of the catalyst, and the relative content on the surface of the catalyst was test by Energy Dispersive Spectrometer (EDS). In addition, the transmission electron microscope (TEM, JEM-2100, Japanese Electron Company) was introduced to observe the homogeneity of the component.

The determination of the casting temperature

The high-pure copper was divided into several parts and put into the intermediate frequency induction furnace which was covered by charcoal. The planned quantity of other elements was added when the reaction temperature was reached. The mixture was stirred for 4 min while taking argon as shielding gas and then preserved for 35 min. The effect of casting temperature on standard deviation was showed in Figure 2. 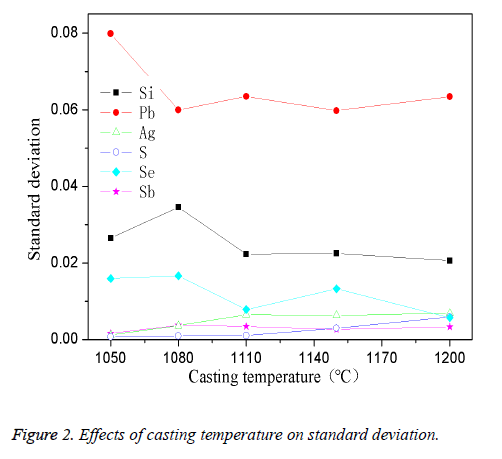 The determination of the stirring speed

The high-purity copper was divided into several parts and put into the intermediate frequency induction furnace which was covered with charcoal. Then add in planned quantity of other element when the reaction temperature reached 1200°C. The mixture was stirred for 4min while taking argon as shielding gas, then preserved for 35 min. The effect of different stirring speed on standard deviation was shown in Figure 3. 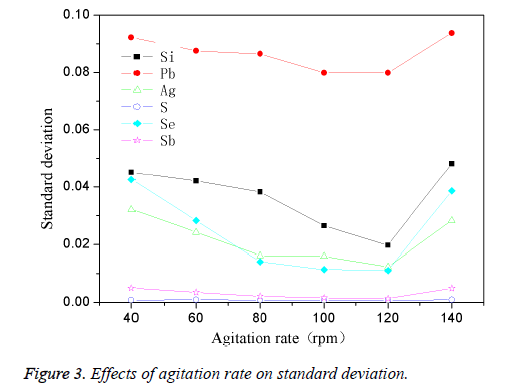 The determination of the stirring time 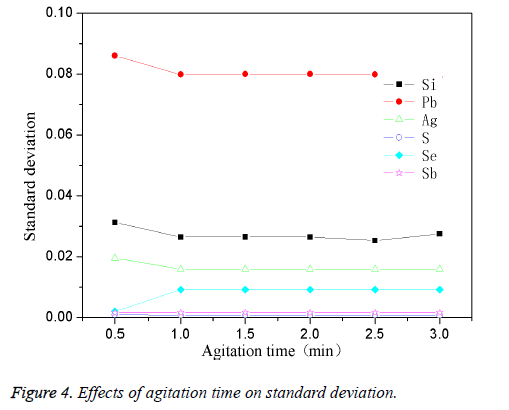 The determination of the holding time 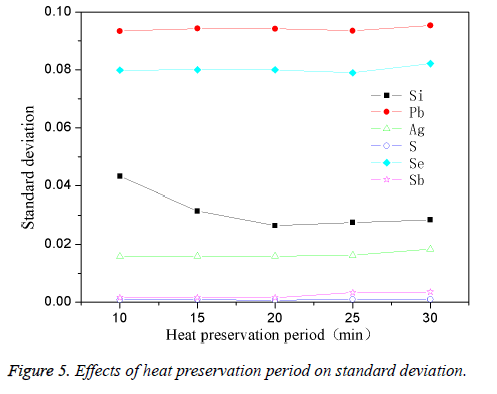 The determination of the quantity of argon gas 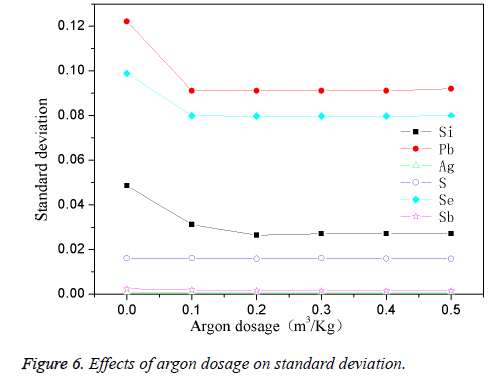 Characterize of the standard samples

We can come to the conclusion that under the condition of casting temperature 1200°C, mixing speed 120 rpm, mixing time 1 min, holding time 25 min, and the dosage of argon gas 0.4 m3/kg , we can get the optimum spectral cathode copper standard samples. The samples were characterized by X-ray diffraction (XRD), Scanning electronic microscope (SEM), and transmission electron microscopy (TEM). Results were shown in Figures 7-9. From Figures 7-9, it can be seen that the standard samples prepared under the optimum condition are purity copper with compact structure and intensely diffraction peak compared with the standard card (PDF04-0836). 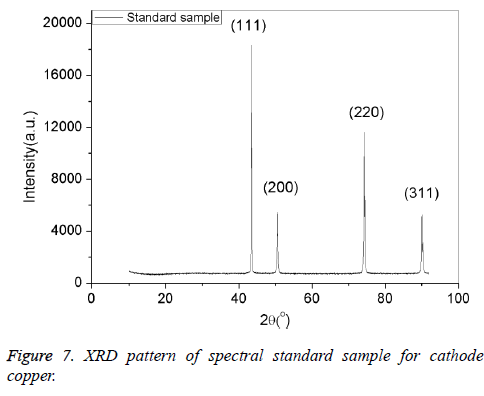 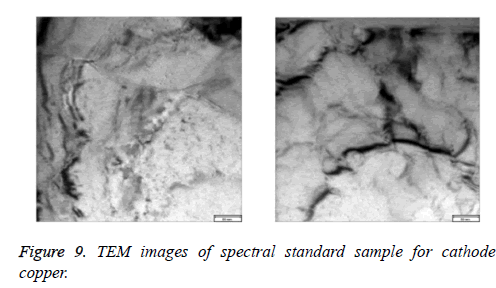 The standard samples prepared in the experiments were tested by eight authority lab using national analysis method, each experiment were conducted by at least two experienced analyst and more than four analyst results had been obtained.

Each average values had been proved to obey the normal distribution using the Shapiro-Wilkes method [25], figures were shown in Figure 10; validating the results from collaborating laboratories using Dixon inspection and tradeoffs, all data had passed the Dixon inspection as both high-end statistics and low-end statistical value were smaller than the critical value; Cochran tests shows the results were at the same accuracy level.

Figure 10: The curve of Normal distribution for Copper standard sample numbered from 1 to 5.

Determination of the standard value

From the curve of normal distribution showing in Figure 10, we could see that the curve for Se, Sb, Pb, S, Si, Ag were completely symmetric about the vertical, about the standard value, with a steepen skew. And the curve graded increase with the increase of the content of copper standard samples from No. 1 to No. 5. Which showed that the smaller the Standard deviation will be, the more accurate the fixed value will be [26], so we could determine the standard value upon confirmation of fixed value data obeying the normal distribution or approximately obey the normal distribution and the abnormal value inspection and precision inspection test after remove outliers, the results were shown in Table 1.

Inspection of the working curve

The working curve was made at the optimum experimental condition, using the average intensity value and standard value of the tested element, which showed a good linear with the correlation coefficients more than 0.99.

Spectral cathode copper standard samples were prepared in the intermediate frequency induction furnace by adding necessary additives into 5N-level cathode copper. After batch experiments, we can get the optimized condition of preparation process were as follows: the casting temperature was 1200°C, the stirring rate was 120 rpm, the stirring time was 1 min, the heat preservation period was 25 min and argon dosage was 0.4 m3/kg. The design of the standard samples meet the requirements of cathode copper casting technology, the process obey the course of “technical specification for standard samples used in the analysis of the non-ferrous metal product analysis” (YS/T409). The spectral standard sample for cathode copper obtained under these conditions had a preferred orientation on the (220) plane due to its compact and uniform structure, stability, accuracy, and reliability.