＋Authors contributed to this paper equally

Value of Apolipoprotein A I (ApoA-I), α1-antitrypsin (α1-AT), actin α (ACTα), fibronectin (FN), haptoglobin (Hp) on the early diagnosis of coronary heart disease (CHD) with unstable angina (UA) blood stasis syndrome was investigated. Severe screening of 30 every cases of plasma samples with qi deficiency and blood stasis syndrome, phlegm and blood stasis syndrome, by western-blot analysis to detect 5 protein expression levels; Logistic regression analysis to analyze the diagnostic accuracy of plasma proteins combination. Detected five features of protein in the two type of CHD, and ApoA-I expression were declined, lower than the control group of healthy people; four proteins expression were significantly higher. By correlation analysis, ApoA-I is positively correlated with HDL and high negative with MCHC; α1- AT is negatively related to MCH; FN and TT are positively correlated; HP and LDL are positively correlated; ACTα and glucose are positively related. α1-AT, FN, HP, ACTα and healthy people are positively related, except ApoA-I. The diagnostic model composed of five proteins is specific. Combination of the characteristic of this protein group may become a new biomarker in the clinical diagnosis.

Coronary heart disease (CHD) is the complex and major diseases of the serious harm the health of the elderly population in China, the occurrence of CHD, the development of a variety of factors under the action of various aspects of complex chronic formation process. According to statistics, in patients with CHD hospitalization, 60% of the first performance is Unstable Angina (UA). Currently, the pathogenesis of UA is still not entirely clear, there is no clear marker of early diagnosis. In the pre-research work of this group, we found that the phlegm and blood stagnation syndrome and qi deficiency blood stasis of some of the characteristics of protein, we selected some representative of the five protein for the study, to further explore the function of each protein as well as the relationship with clinical diagnosis, and to determine the significance of each protein in the diagnosis of CHD with unstable angina blood stasis, in order to find more specific higher index group, the early diagnosis of cardiovascular disease, play an active role on the prevention and treatment of CHD.

The healthy control group whose physical examination of ECG, chest radiograph, liver and kidney function, blood biochemical routine examination had no abnormalities and no blood stasis performance. Deal with three groups of general information by statistical methods, the difference was not significant (P > 0.05), and was comparable.

Material and preparation of protein samples

60 patients were admitted to hospital in two days, taken 2ml of fasting venous blood, EDTA, 4 °C, 3000r/min, centrifugal 10min, then packing the supernatant, saved at -80 °C refrigerator. the same as the healthy people. The Bradford method for the determination of plasma protein content. The protein concentration is 5μg/μl. Mixed the plasma protein samples with sample buffer in a boiling water bath for 3min, then quickly insert the samples in ice. Add the samples in the hole of gel to electrophoresis. Sample of each hole are 50μg , the volume of the molecular weight protein standard was 5μl / hole.

10% SDS-PAGE electrophoresis 2h, voltage 100V; 100V, 300mA, 100W, electrotransfer 1.5h (transmembrane time proportional to the molecular weight of the protein). Observed the effect of the membrane by ponceau staining and washed away the ponceau. Closed PVDF membrane with 5% nonfat dry milk in TBST for 1h at room temperature. According to an appropriate proportion with blocking solution to dilute primary antibody and incubated at room temperature for 2h or 4°C overnight. After incubation, rinsed the PVDF membrane with blocking solution for three times, each 10min. Reference to two anti-manual, in accordance with the appropriate proportion of horseradish peroxidase (HRP)-conjugated secondary antibody, After incubated PVDF membrane 1h , rinsing with PBST for three times, 10min each time, washing within 1h to identify. The results of luminescence were identified using ECL and exposure cassette at different time points, imaging in medical X-ray film, each experiment was repeated three times. Image scanning, preservation, analysis. 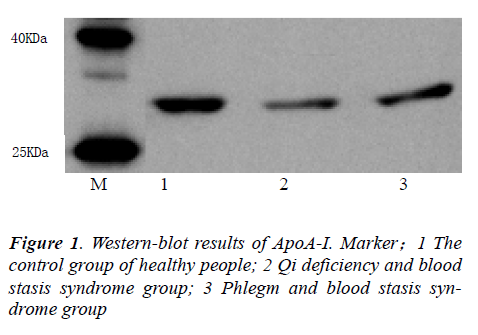 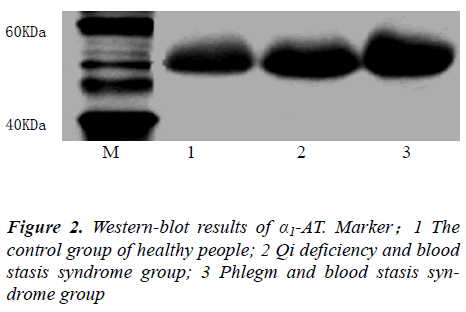 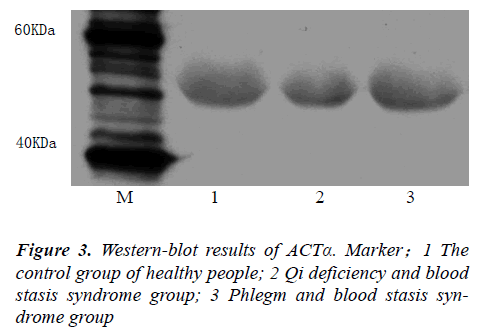 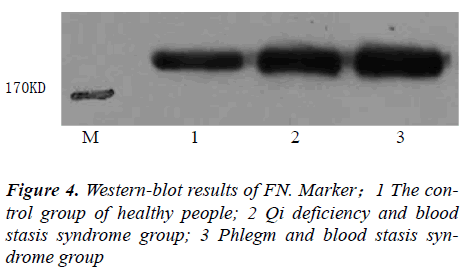 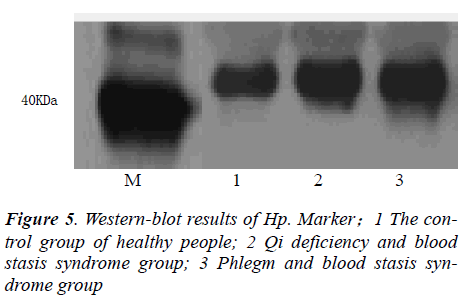 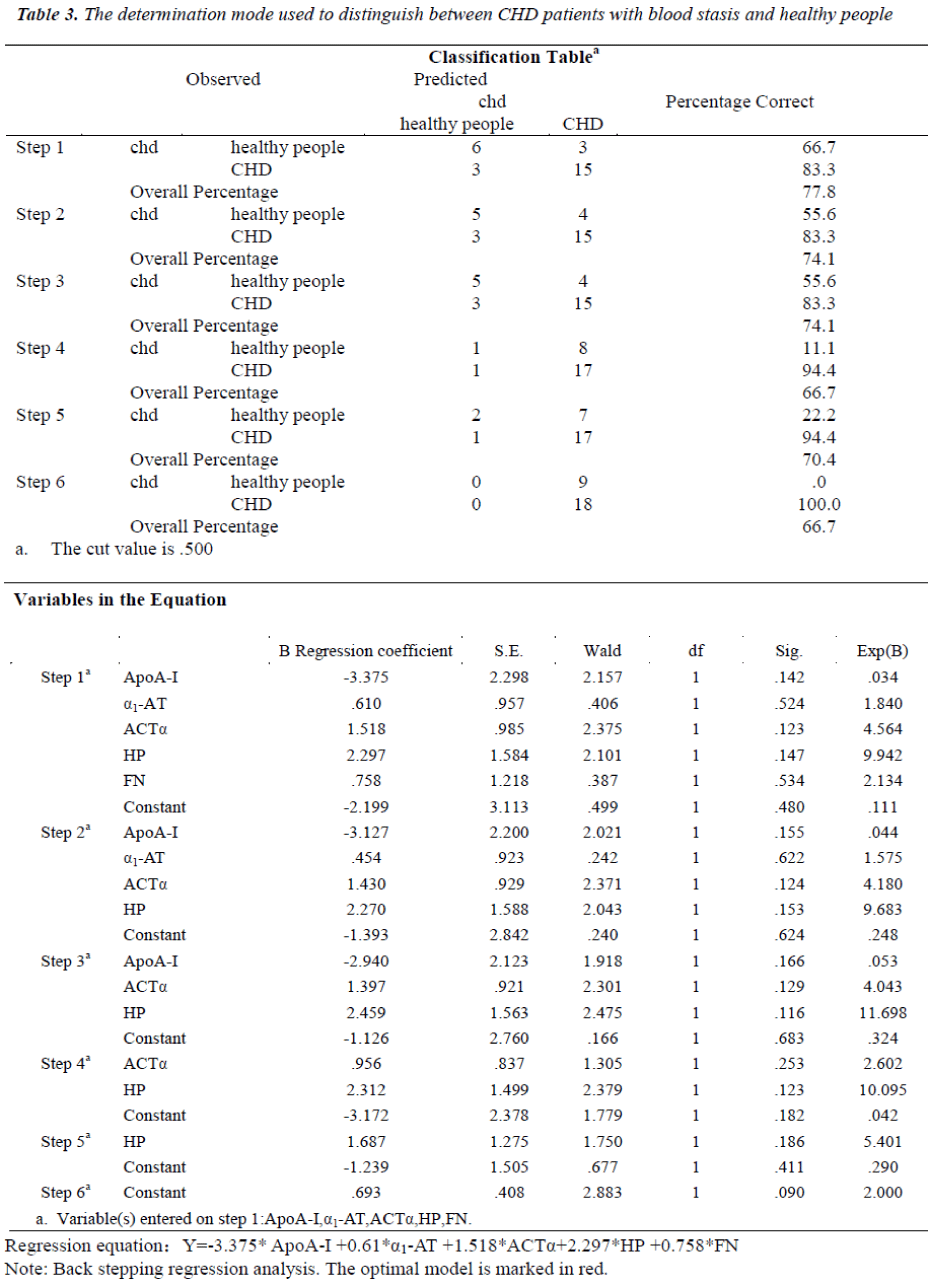 Table 3: The determination mode used to distinguish between CHD patients with blood stasis and healthy people

Study on TCM syndromes is to reveal the hidden science connotation in TCM syndrome theory with modern medical theory, and clarify the microscopic mechanism of TCM diagnosis and treatment of a variety of syndrome and its related diseases. The researchers hope to apply modern science and technology method to find the material basis of TCM syndrome, these substances determine the dynamic process of development of the syndrome, is special material which produced in the development of the syndrome [4], as modern medical diagnosis of a disease, to find objective indicators. However, the complexity of TCM syndrome indicates: between the syndrome and pathogenic factors, the physical and chemical indicators, prescription effect, there is a nonlinear relationship, so the positioning of the syndromes should be integrated. This study through the comparison between normal and pathological samples of protein components, and comparison between the same disease syndrome, it is possible to find a unique protein expression of certain diseases or the same disease with different syndrome type from the integrity, and to create a system of regular contact between protein polymorphisms and TCM disease type, diagnosis and prescription, and to find the common nature of the syndrome in a complex variety of pathogenic factors [5].

The above experimental results show that: Abnormal plasma protein expression reflect the obvious change of the biological basis in CHD blood stasis patients’ body. There are also differences between the two type of CHD blood stasis patients, while the five proteins associated with clinical indicators. TCM believes that "all within must be shaped to various outside". Syndromes in shape on the outside of the four diagnostic macroscopic information can combined protein changes in the intrinsic syndromes to reveal the pathogenesis of the syndrome. These findings suggest that the ApoA-Ⅰ,α1-AT, ACTα, FN, Hp involved in the occurrence and development process of CHD blood stasis, relevant pathophysiological involving lipid metabolism disorders, inflammation, energy metabolic disturbance, blood coagulate abnormalities, etc.

ApoA-I is the main structural component of HDL, which is a protective protein, but need to be combined with HDL complexes in order to express the activity. It can antiporter cholesterol from the arterial wall and foam cells, and can effectively prevent the superoxide anion oxidative modification of LDL, which can prevent the occurrence of CHD. Studies have shown that the role of ApoAI, not only in the regulation of lipid metabolism, but also it is a kind of anti-inflammatory effects of negative phase proteins [6]. ApoA-I protein expression was significantly lower than healthy people in the plasma of CHD blood stasis, which prompted that ApoA-I may be released from HDL in the acute reaction, generated through the interaction with the white blood cells and other inflammatory cells, reducing IgG-mediated neutrophil degranulation and peroxidase, which play the anti-inflammatory effects [7].

α1-AT is one of the most important protease inhibitor in human plasma, which has a wide range of effects. The role of α1-AT is anti-inflammatory or proinflammatory activity under different conditions, often as a marker of the inflammatory response [8]. When α1-AT has the activity of the serine protease inhibitor, mainly role is antiinflammatory, anti-apoptosis and anti-damage; When playing the role of protease inhibitors, α1-AT has the activity of raised the white blood cells or monocytes, and related to the tissue damage caused by inflammation. α1- AT protein expression was significantly higher than healthy people in the plasma of patients with CHD blood stasis. After intimal injury, one possibility is that α1-AT, from the circulatory system, combines the endothelial cell surface, diffusion into the arterial wall, blood leukocytes and other inflammatory factors gathered at the site of atherosclerotic injury, the intimal thickening or plaque formation, resulting in a pathological product of "sputum" and "stasis". Another possibility is that the arterial wall produce a large number of α1-AT to protect the vascular tissue by inhibiting elastase activity.

ACTα is the unique protein that we found in the 2-DE MALDI-TOF-MS analysis of qi deficiency and blood stasis syndrome. ACTα expression in heart, skeletal muscle, measured ACTα in plasma showed that patients with qi deficiency and blood stasis may be the presence of myocardial injury, ACTα released into the plasma after myocardial cell injury. As ACTα binding of ATP, myocardial cells may exist energy metabolic disturbance. After myocardial injury in patients, the clinical symptoms show hortness of breath, fatigue, listlessness and other deficiency symptoms.

Hp is an antibacterial effect of protein, Hp as an acutephase proteins plays an important role in host resistance of infection and damaged tissue repairing and homeostasis process, and its serum levels of infection, trauma, inflammation, cancer, myocardial infarction and other pathological conditions were significantly increased. Hp in serum is an important angiogenic factors, which promote endothelial cell growth and differentiation of new blood vessels [10]. Heliovaara [11] found that Hp positive correlation with blood total cholesterol level, body mass index, obesity rates, and lipid metabolism disorder. But lipid deposition is an important cause of atherosclerosis [12]. Hp expression elevated in the plasma of blood stasis syndrome of angina pectoris may be the body start antibacterial self-protection system.

CHD blood stasis lacks of unique, specific pathophysiological changes, Therefore, the research of the syndromes should be holistic: "the overall response of this complex giant system of the body under the pathological state.” Five proteins involved in the development process of CHD blood stasis. The joint dynamic monitoring of five proteins can be used as regular screening and monitoring indicators of early diagnosis, treatment, prognosis and prevention of CHD blood stasis. Application of ApoA-I, α1-AT, FN, Hp, ACTα protein can distinguish between healthy individuals and patients with CHD, the accuracy rate of 77.8%; Application of ApoA-Ⅰ, FN and the ACTα proteins can distinguish between CHD patients with qi deficiency and phlegm blood stasis syndrome, the accuracy rate of 66.7%. Therefore, the combination of this characteristic protein group can be applied to the clinical diagnosis and the role of drug research. Of course, as a follow-up and development of the existing results of this study, we will further expand the number of cases and subjects cases were followed to analyze the diagnostic model and the disease prognosis, which will help to find a more realistic value of biomarkers for CHD.