In the cycle of human growth and development, 15-25 age groups are more susceptible to osteosarcoma/osteogenic sarcoma and related symptoms. Neo-adjuvant chemotherapy is often combined with the limb salvage surgeries and this has found to improve the survival of the patients of younger age group [1]. The rate of incidence of osteosarcoma is higher in males than females. In general, among sick patients, out of every three people two are male and one is female [2]. From a statistical point of view, although, the disease is mainly seen in children and adolescents, it can actually occur in every age group [3]. For the patients in the other group, the intravenous amputation is used. The effects of two kinds of chemotherapy on limb salvage surgery for osteosarcoma are compared and analyzed.

After chemotherapy, the patient's pain will be gradually reduced, and the sleep quality can be improved significantly. The results of clinical medicine show that the volume reduction of osteosarcoma is a good symptom after treatment. The volume changes of osteosarcoma after operation can be determined by measuring the circumference and diameter of the tissue [4]. The conventional X-ray imaging can describe the reduction of soft tissue volume in the vicinity of osteosarcoma, and can also be used to characterize the edema in vivo. The increase of periosteum and ossification show that the effect of chemotherapy is obvious, as shown in Figure 1. 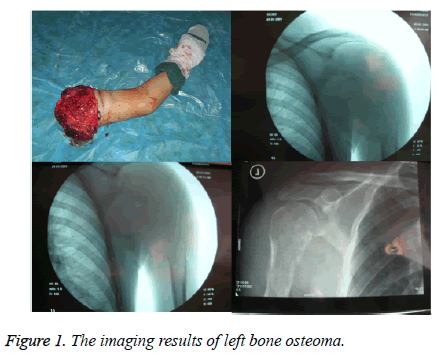 To evaluate the efficacy of chemotherapy, observational and statistical analysis of osteosarcoma tumor volume change is measured mainly through the MRI imaging technology (Figure 2). Some studies have suggested that T2 signal can be associated with the recovery of osteosarcoma, which can be used to determine the changes of osteosarcoma with the increasing number of tissue signals [5]. 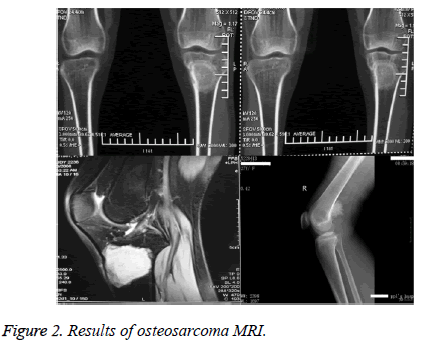 The selected age group of the patients ranges from 15 to 65 years, of which, there are 18 males, and the number of females is about 14. Table 1 shows the basic information of patients.

Table 2. Treatment model design of Group A and B.

The patients in the A group and the B group are treated with two categories of preoperative chemotherapy regimens. In the volume test, all the osteosarcoma in vivo is decreased. With the limb salvage treatment, the magnitude of osteosarcoma volume reduction is the largest, and the patient's pain is shorter (Figure 3). There is no significant difference between the limb salvage surgery and amputation surgery in the long-term treatment of osteosarcoma. Since the results of limb salvage surgery provides a better improvement in terms of function, and pain relief, the chances of patients choosing it will be more. The study results thus provide a more promising treatment model for osteosarcoma patients. 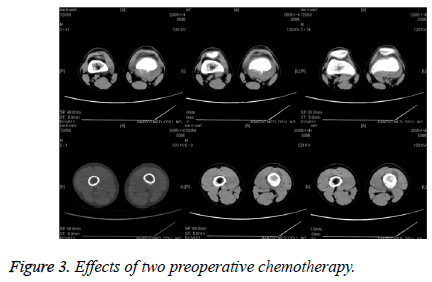 In this study, limb salvage surgery is adopted. The surgical methods of osteosarcoma segment resection and artificial limb replacement are selected. Before surgery, the prosthetic limb is prepared for the patient. During the operation, the osteosarcoma is removed to the maximum extent. Figure 4 is the survival probability curve of limb salvage surgery, and the Figure 5 is the survival curve of patients after amputation. 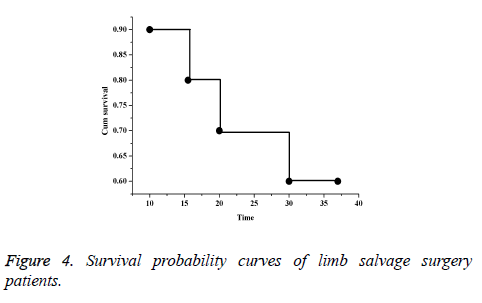 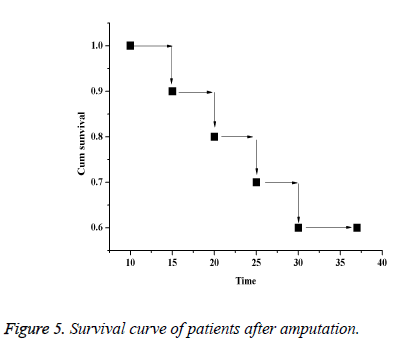 Osteosarcoma is one of the challenging diseases in terms of disease management and recovery. This suggested mode can be a cost-effective method of treatment. The preliminary findings of this study promise a better improvement in terms of pain management and survival. Agarwal et al. also had a similar study report where they have showed 100% cell death and survival by using chemotherapy combined with limb salvage surgery [7]. The neoadjuvant chemotherapy also shows improvement in higher age groups of 41-60 years in a recent report by Bacci et al. [8].

In this study, 32 osteosarcoma patients in the department of orthopedics in a hospital from 2008 to 2016 were selected as the subjects. And the effect of adjuvant chemotherapy in limb salvage surgery for osteosarcoma was analyzed. The subjects were divided into group A and group B. However, there is no significant difference in local recurrence rate between A group and B group after surgery. The reason for the better comprehensive effect of limb salvage group is that the treatment of the limb salvage group can preserve the basic function of the affected limb, which can furthest improve the quality of life of patients. In addition, the effect of chemotherapy can achieve the purpose of killing tumor cells, so that the toxic reaction of patients can be reduced [9].