Study on the determination of lactone contents in Ginkgo biloba leaves and their effects in schizophrenia.

Based on preliminary experiment, we found that the crude extract of Ginkgo biloba leaves has some role in schizophrenia. Schizophrenia is a common chronic mental illness mainly characterized by highly uncoordinated mental activity and the environment. The onset of schizophrenia is associated with various factors and is relatively complex, it has been reported in the literature that the pathogenesis of schizophrenia is neurotransmitter dysfunction [1], which results in the abnormality of GJIC that regulate nerve cells2. Studies have confirmed that cell injury mediated by oxidative stress is involved in the pathophysiology of schizophrenia, and can lead to cell GJIC dysfunction.

Traditional Chinese physicians believe that qi stagnation and phlegm coagulation are potential pathogenesis of schizophrenia, treatment starts mostly with "phlegm", and Ginkgo biloba leaves have such effect. In the present experiment, through the detection of superoxide dismutase (SOD), malondialdehyde (MDA), nitric oxide (NO) and protein kinase C (PKC) in the schizophrenic model SD rats, the protective role of Ginkgo biloba leaf extract against oxidative damage and its GJIC regulatory functionality through PKC are explored, providing the basis for novel drug development.

Study on the extraction process of Ginkgo biloba leaf lactones

Appropriate amounts of ginkgolide A, B, C reference substances were precisely weighed, and prepared separately into stock solutions with a concentration around 1 g/L with methanol. The ginkgolide A, B, C stock solutions were prepared into a series of mixtures of different concentrations with methanol, 10 μL of samples were injected, linear regression was performed with respective peak area and concentration, and regression equations were obtained as shown in Table 1.

Table 1. Regression equations for ginkgolides A, B, C 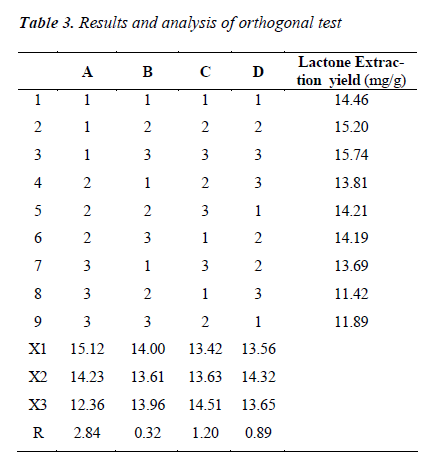 Test samples were filtered through 0.45 μm membrane, and 10 μL were injected, regression equations were introduced, and quantification was carried out by external standard method.

The range of factors and levels being investigated by the orthogonal test was determined based on the results of preliminary experiment, design scheme and analysis are shown in Tables 2, 3.

Study on anti-schizophrenic effect of ginkgolides

The preparation of drug

Rats were randomly divided into five groups: normal group (A), model group (B), Ginkgo biloba leaf lactone high-dose group (C), medium-dose group (D) and lowdose group (E), n=10 in each group. Before model establishment, rats in the Ginkgo biloba leaf lactone high-, medium- and low-dose groups were continuously administered ig at a dose of 20 mL/kg, once per day; normal group and model group were given ig with equivalent normal saline once per day 20 mL/kg, each group was administered for 21 consecutive days. 2 h after the last administration, rats in the groups B, C, D, E were given ip with 0.6 mg/kg MK-801 in the left abdominal cavities to induce SD rat model of schizophrenia, normal group received an equivalent volume of saline injection.

After model establishment, the behavioral activities, appearance signs, and stool and urine properties of rats in each group were observed, 3 d later, the rats were sacrificed, and sera were collected for determination of SOD, MDA, NO and PKC levels.

Statistical analysis was performed using SPSS 11.5 package, all data were expressed as

± s, means of groups were analyzed by one-way ANOVA, and pairwise comparison between groups was performed by LSD test; P<0.05 was considered statistically significant.

It can be seen from the experimental data and range analysis results that extraction time (A) and ethanol concentration (C) were important factors influencing the extraction yield of Ginkgo biloba leaf total lactones, followed by the solvent volume (D), while the influence of extraction temperature (B) was comparatively small.

No rat died during the model establishment, rats in the normal group were lively and active, with shiny furs, smooth breathing, and normal stool and urine; rats in the model group presented mental restlessness, with involuntary shaking of the head, torso twisting, uneasy limbs, excessive sensitivity to stimuli, and visible fur bristling; urine increased, while stool was normal; rats in the Ginkgo biloba leaf lactone groups had conditions similar to that in the model group. But with the extension of time, the condition of rats in each Ginkgo biloba leaf lactone group markedly improved compared with the model group. It shows that mental restlessness ease obviously, involuntary shaking of the head, torso twisting and the wave of limbs reduced, urine was back to normal, stool was normal. 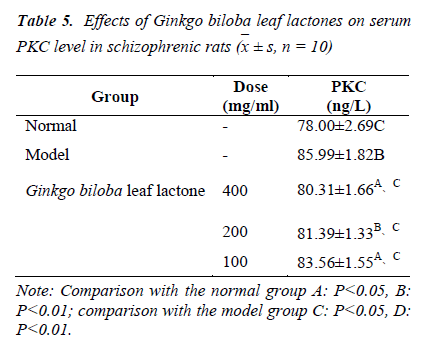 Etiology hypothesis of schizophrenia believes that glutamate N-methyl-D-aspartate (NMDA) receptor function plays an important role in the pathophysiology. Dizocilpine maleate (MK-801) can highly selectively antagonize NMDA receptors, and thus is widely used in the study of animal models of schizophrenia. MK-801 can cause a range of behavioral changes in rodents, including increased locomotor activity, stereotyped behavior, ataxia, sensorimotor gating disorders, social dysfunction, etc. MK-801-induced lesions in schizo-phrenic model rats are similar to the qi stagnation and phlegm coagulation in the theory of TCM.

It has been reported in the literature that the blood levels of various antioxidant substances and lipid peroxides are abnormal in patients suffering from schizophrenia4. It can be simply inferred that the excessive generation of free radicals in the brain or weakened physiological clearance function in patients leads to increased lipid peroxidation and enhanced neurotoxicity. This may play some role in the occurrence of the disease. A study has shown that5 some therapeutic drugs can affect the metabolism of free radicals. These indicate that the treatment of schizophrenia can be achieved by regulating the metabolism of free radicals in the body.

Superoxide dismutase (SOD) plays a vital role in the body's oxidative-antioxidative balance, it can scavenge superoxide anion radicals (O-2), and thus protects cells from damage, which reflects protective capacity against cell damage in some extent. Malondialdehyde (MDA) level is an important index reflecting the degree of lipid peroxidation and level of free radicals within the body [6,7], MDA can indirectly reflect the severity of free radical attack to body cells. In this study, SOD activity in the model group was significantly lower while MDA was significantly increased compared with the normal group and Ginkgo biloba leaf lactone groups. The experimental results showed significant inter-group differences (P<0.05 or P<0.01), which were consistent with other reports [5,8].

NO is an important regulatory substance in intercellular transfer of information, which participates broadly in the pathophysiological processes of cardiovascular, nervous and immune systems [9].

Relevant studies have shown that NO has both neuroprotective and neurotoxic effects in the central nervous system. Oxidized NO (NO+) reacts with thiol (-SH) of Nmethyl- D-aspartate receptor (NMDAR) to lower NMDAR activity, inhibit Ca2+ influx, block glutamate acid (Glu) conduction, and avoid Ca2+ overload-induced toxicity in cells, and thereby plays a neuroprotective role. Reduced NO (NO- ) combines with O- to form peroxynitrite anion (ONOO-) [10], ONOO- enables nitration of amino acids such as tyrosine and tryptophan, resulting in inactivation of tyrosine hydroxylase, SOD and other important enzymes, and thus affects cell metabolism, damages mitochondrial structure and intracellular Ca2+ homeostasis, causes DNA strand breaks by acting with nucleic acids, and initiates lipid peroxidation by reacting with lipids11 thereby causing tissue damage. In this study, NO level in the model group increased significantly compared with the normal group and the Ginkgo biloba leaf lactone groups, showing significant inter-group differences (P<0.05 or P<0.01), which were similar to other relevant reports [11, 12].

Protein kinase C (PKC) is a serine/threonine kinase family member, and an effector in the G protein-coupled receptor system, which can be activated by diacylglycerol and calcium ions. However, the activation of PKC is lipid-dependent, and at the same time, Ca2+ -dependent. When the membrane lipid DAG appears in the plasma membrane, PKC in the cytosol is bound to the plasma membrane, and then activated by the action of Ca2+ . PKC can activate target enzymes in the cytoplasm and thereby participates in the regulation of biochemical reactions, meanwhile, it can also act on transcription factors in the nucleus, and is involved in the regulation of gene expression, yet the genes regulated are mostly associated with the cell growth and differentiation [13]. 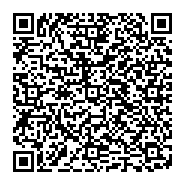