Study on the chemical constituents of Venenum and the activity of its monomeric compounds against osteosarcoma LM-8 cells.

The Orthopaedic Department, The 82th Hospital of PLA in Huai’an, Jiangsu Province, 223001, China

Venenum was originally recorded in the "Ben Cao Yan Yi (Augmented Materia Medica)", which is a precious Chinese medicine, it is also known as Chan Su Mei Zhi ("Theory of Drug Properties"). Venenum is the dried secretion of Bufo bufo gargarizans Cantor or B. melanostictus Schneider. Venenum is acrid, warm, toxic, and has detoxification, swelling subsiding, refreshing and resuscitation inducing effects. Recent studies have found that Venenum has a good anti-tumor effect [1-3], which has been widely used in the clinical treatment of various cancers and tuberculosis.

Osteosarcoma is one of the most common primary bone malignancies, which occurs mostly in adolescence, with an extremely high mortality, causing great harm to the health of young people [4]. The majority of drugs used currently for the treatment of osteosarcoma have strong toxic and side effects, the finding of novel safe and effective drugs can improve the treatment efficacy of osteosarcoma [5]. In this study, cinobufotalin and desacetylcinobufotalin were acted on osteosarcoma LM8 cell lines, CCK-8 assay and flow cytometry were used to study their effects on apoptosis of osteosarcoma cells, and immuno histochemistry techniques were applied to preliminarily explore their apoptosis inducing mechanisms.

Extraction and isolation of chemical constituents of Venenum

1 kg of Venenum powder was taken, and extracted under reflux with 95% ethanol for 1.5 h three times, after ethanol was recovered until no ethanol smell was detectable, the remaining was dissolved in an appropriated amount of water, and extracted three times with an equivalent volume of CHCl3 to give 70 g of chloroform layer, as well as 60 g of aqueous layer. The chloroform extract was subjected to isolation methods of silica gel column chromatography, HPLC and recrystallization purification to yield cinobufotalin (1) and desacetylcinobufotalin (2). 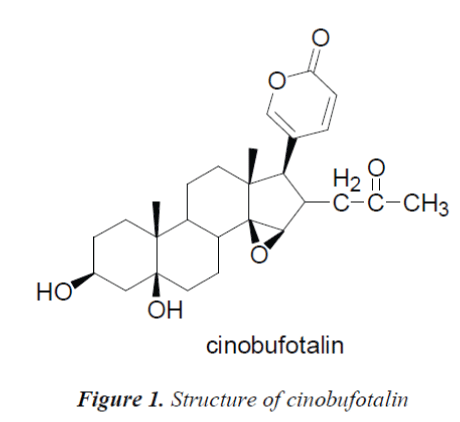 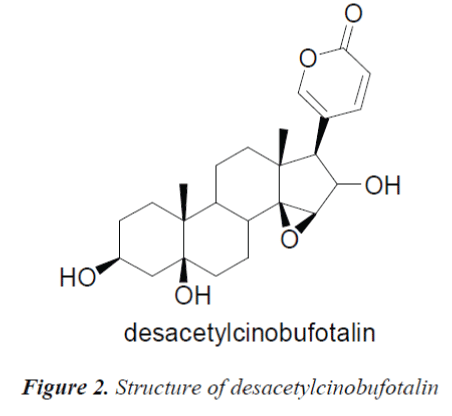 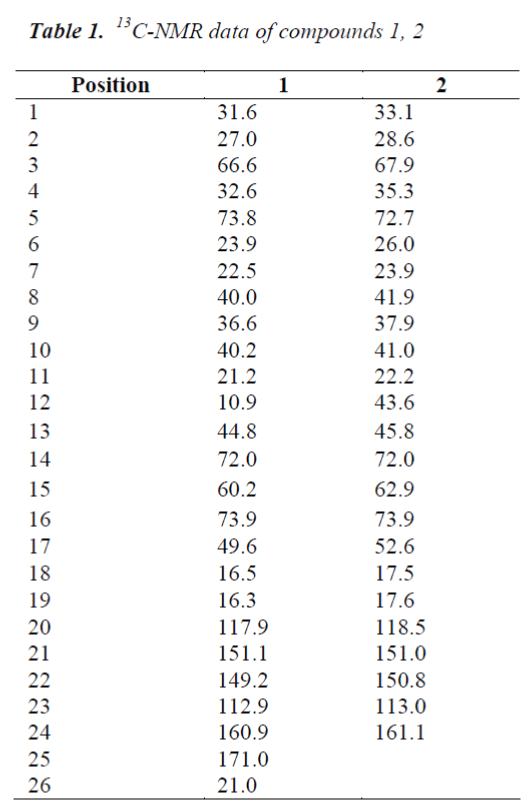 Table 3. Changes in cell apoptosis rate after action of desacetylcinobufotalin on LM8 cells for 3 d

Table 4. Effect of desacetylcinobufotalin on Bcl-2 and Bax expressions

RPMI1640 containing 10% fetal calf serum was used as the culture medium, and cells were placed in a 37°C, 5% CO2 incubator for incubation. After about 3 days when the cells covered more than 80% of the bottom of culture flask, they were digested with 0.25% trypsin and 0.02% EDTA. After being digested into single cells, the cells were seeded in culture flasks at 5×105 cells/flask.

Cells in logarithmic growth phase were digested With 0.25% trypsin and 0.02% EDTA, and cell concentration was adjusted to 5×104/ml, then the cells were added to the culture plate, added with an appropriate amount of the above culture medium, and cultured in a 37°C, 5% CO2 incubator until completely covering the plate.

C3H mouse LM-8 osteosarcoma cells in the logarithmic growth phase were digested into suspension with 0.25% trypsin and 0.02% EDTA. The suspension was passaged in the culture flask, when the cells covered about 70% of the flask, the original medium was discarded and replaced by a new medium containing Venenum extract, cinobufotalin and desacetylcinobufotalin, drug concentration was 15 μg/ml in all of the groups, then the culturing was continued for an additional 24 h.

Measurement of the inhibitory effects of Venenum extract, cinobufotalin and desacetylcinobufotalin on LM-8 osteosarcoma cell proliferation by WST-8 assay

The logarithmic growth phase C3H mouse LM-8 osteosarcoma cells were prepared into an 80,000 cells/ml suspension. 100 μl of cell suspension was added to each well of culture plates, and placed in a 37°C, 5%CO2 incubator for preincubation. The culture medium in each well of the culture plates was replaced by 10 μl of new medium containing Venenum extract, cinobufotalin and desacetylcinobufotalin. Drug concentration in each group was 15 μg/ml. The plates were placed in a 37°C, 5%CO2 incubator and cultured. At 24, 48 and 72 h, 10 μl of CCK- 8 solution was added to each well. After an additional 6 h of culturing, optical density was measured at 450 nm using automatic microplate reader. Cell growth inhibition rate in each group was calculated according to the optical density.

The concentration of drug at which cell growth was inhibited by 50% (IC50) was calculated using IC50 calculator software, and the analysis of variance on the experimental data were performed using SPSS 11.5 statistical package.

Measurement of apoptosis by flow cytometry

The optical density of each well of cells was measured under different action time of different drugs based on WST-8 assay, and respective cell growth inhibition rates were calculated, the results are shown in Tab. 2. It can be seen from the results that the effect of desacetylcinobufotalin on LM-8 cells was apparent, compared with other groups, its LM-8 cell proliferation inhibitory effect was time dependent, while the effects of Venenum extract and cinobufotalin were not obvious.

By factorial design analysis of variance, the cell growth in inhibition rate of desacetylcinobufotalin was significantly different at different times (P<0.05). After calculation, IC50 values of 1st, 2nd, 3rd days were 23. 50μg/ml, 16. 00μg/ml and 12 .09 μg/ml, respectively.

Effect of desacetylcinobufotalin on apoptosis rate of LM-8 cells

Currently, there are two classical pathways of apoptosis which are widely accepted [7-10], they are death receptor pathway and mitochondrial pathway, Bcl-2 protein family plays a crucial role in the mitochondrial pathway, its antiapoptotic protein Bcl-2 and pro-apoptoticprotein Bax are both localized in the mitochondrial membrane, during the process of apoptosis induction, Bax content increases, which transfers from the cytoplasm to the mitochondrial outer membrane, changing the permeability of the mitochondrial membrane, leading to mitochondrial channel (PTP) opening, mitochondrial transmembrane potential decreases, allowing CytoC to release into the cytoplasm and activate downstream caspase enzymes, initiating caspase cascade reaction, and ultimately cause apoptosis [11]. While the anti-apoptotic protein Bcl-2 can prevent Bax shift to the outer mitochondrial membrane, or directly act on the mitochondrial channels and thereby block CytoC release. According to the relevant literature [12], the cells' sensitivity to death signals depends on intracellular competitive dimerization process of Bcl-2/Bax, Bax dimer formation can induce apoptosis, while increased expression of Bcl-2 protein can separate Bax dimers, and form Bax-Bcl-2 dimers which are more stable than the Bax-Bax, antagonizing the Bax-Bax-induced apoptosis, so that cells do not undergo apoptosis. A study has further confirmed this conclusion [13], in which primary osteosarcoma and non-malignant bone tissue specimens were immunohistochemically stained to study the expression of apoptosis-related genes, the results found that p53, Bax and Bcl-2 were relatively highly expressed in tissues of osteosarcoma patients, while not expressed in benign control group. Statistics have shown that patients with lower Bcl-2/Bax have low 4-year survival rate, and short disease-free survival. All of the patients whose expression of apoptosis-related genes was Bcl-2(- )/Bax(+)/p53(+) had a recurrence within four years. It can be speculated that Bcl-2/Bax ratio is an important factor in determining the occurrence of apoptosis, during the onset and development of osteosarcoma, cells not only undergo abnormal proliferation, more importantly, their ability and propensity to apoptosis also decrease, presenting elevated level of Bcl-2 expression, and decreased Bax expression. Up-regulation of Bcl-2 or down-regulation of Bax can inhibit osteosarcoma cell apoptosis induced by a variety of factors. Conversely, down-regulation of Bcl-2 or up-regulation of Bax promotes apoptosis in osteosarcoma cells.

In conclusion, we demonstrated the apoptosis inducing effect of desacetylcinobufotalin on osteosarcoma cells from the morphological and gene protein level perspectives, moreover, the apoptosis inducing effect showed dose-dependency, its mechanisms involve up-regulation of Bcl-2 expression and down-regulation of Bax expression, desacetylcinobufotalin will be an ideal antiosteosarcoma drug with development potential.