Study on the application of immune index such as CT enhanced cyclooxygenase 2, etc. in the diagnosis of lung cancer

Background: Because of the angiogenic process of malignant tumours, there was significant difference between lung cancer blood supply and benign lesion. The Vascular Endothelial Growth Factor (VEGF) and Cyclooxygenase-2 (COX-2) is associated with the progression and poor prognosis of lung cancer. The aim of the study was to assess the correlation between the expression of COX-2, VEGF and Micro Vessel Density (MVD) and CT enhanced performance in lung cancer.

Methods: 25 cases of pathologically confirmed lung cancer and 35 cases of benign lung lesions were conducted by CT enhanced scanning, and the PV method was used for immunohistochemical analysis in the pathological specimen as well as the relationship between expression level of COX-2, VEGF, MVD and CT enhanced peak, histological type, clinical stage, lymph node metastasis and differentiation degree in lung cancer.

Tumour is an angiogenesis dependent disease [1]. It is reported that the expression of Vascular Endothelial Growth Factor (VEGF) and Cyclooxygenase 2 (COX-2) are related to the progression and poor prognosis of lung cancer [2,3]. Zang et al. suggested elevated serum levels of VEGF could predict a poor prognosis of platinum-based chemotherapy in non-small cell lung cancer [4]. The VEGF family played a significant role in the formation of blood vessels and lymphatic’s [5]. Recently, high expression of COX-2 had been confirmed in non-small cell lung cancer progression and was related to tumour invasion and metastasis [6]. Furthermore, COX-2 expression was significantly increased in nodal metastasis compared to primary cancers [7,8]. The angiogenesis quantification standard is the count of micro vessel density (MVD) [9].

Due to the process of angiogenesis in malignant tumour, there was significant difference between lung cancer blood supply and benign lesion [10]. And computed tomography (CT) could display tumour angiogenesis [11]. Based on the changes of tissue density after injection of contrast agent, this research conduct CT dynamic contrast-enhanced scan of 25 cases of lung cancer to obtain tumour CT enhanced peak value; and analysed the expression level of COX-2, VEGF, MVD in pathological specimens by immunohistochemical to study their relationship, in order to infer some malignant biological behaviour and prognosis from the perspective of CT, and to explore the clinical value of this method in the diagnosis of lung cancer.

From July 2004 to Feb 2006, 60 cases of patients, 25 cases of lung cancer, and 35 cases of the control group. An acid fast bacillus was found through surgical pathology and sputum culture or clinical confirmed. Among them, 42 were male and 18 were female with the age ranging from 22-74 y old. The staging was conducted according to the 1986 TNM staging method of the AJCC. The surgical doctor marked the focus in the operation, and embedded the entire lesion specimens by paraffin slice with slice direction consistent with CT fault as far as possible. CT images were compared to pathological sections to analyse the pathological basis of different enhancement features. The tumour enhancement patterns were observed by 3 experienced doctors under the condition of unknown pathological results.

All the patients without preoperative radiotherapy and chemotherapy were instructed to hold the breath in calm inspiratory state before scanning. Before dynamic scanning, the pre scan was used to determine the best level of displaying lesions. SIEMENS Somatom Sensation 16 helical CT was used. Conventional unenhanced: 120 kV, 200 mA, scanning time 0.5 s, 512 × 512 matrix, FOV 30 cm. Lesions were chosen from thick layer with distance of 2 mm and the standard image to conduct reconstruction. The conditions of enhanced scanning were consistent with those of the unenhanced. Using 350 mgI/ml Omnipaque 90~100 ml and high pressure syringe at the flow rate of 3 ml/s through cubical vein of the contralateral lesion to do bolus injection. Scanning was begun 30 s after the injection, and then delays scanning in 1-7 min after injection. Lesions in the central level were chosen for measurement of CT value with the measuring range including 60% circular area of lesion’s short diameter. The parameters were recorded after dynamic enhanced scan: unenhanced CT value, enhanced peak (i.e. maximum enhanced CT value minus value of unenhanced). The average value of CT in 3 levels was seen as CT value of the lesion in this phase.

The collection and processing of specimens. All the wax block specimens were from the Department of Pathology of the second hospital of Harbin Medical University and diagnosed by it. All the immunohistochemical reagents used in this experiment were purchased from Beijing Zhongshan Biotech Corp.

Immunohistochemical results: The total score of cell staining intensity and positive cell percentage was used to determine the expression of COX-2 and VEGF [12]. 5 high power field (400 times) were randomly selected for judgment: 1. No staining was recorded 0 point, 1 point of light yellow, pale brown 2 points and yellow-wish brown 3 points. 2. The positive rate of cell ≤ 5% was recorded 0 point, 5%~25% 1 point, 25%~50% 2 points, and >50% 3 points. By the sum of the above two, 0 point for the negative (-), 1~2 for weakly positive (1+), 3~4 moderately positive (2+), 5~6 strong positive (3+). Detection method of MVD was Weidner [13]. Low power lens (40 times) was first used to find out the three regions of the highest vascular density, and then the number of micro vessels were counted dyeing CD34 into pale brown under high power lens (200 times), and the result was expressed by the average number of vessels in 5 lens, 200 times of the vision.

T-test, F-test and q-test were adopted, as well as linear correlation analysis and linear regression analysis. P<0.05 meant statistical significance. All the statistics were completed by SAS8.1 software. 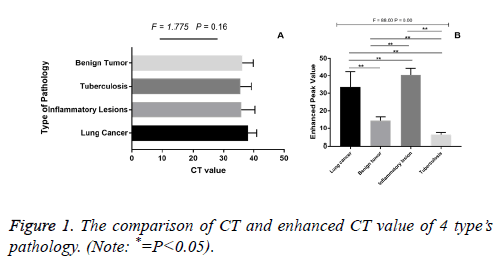 The relationship between CT enhancement and immunohistochemistry study showed that the basic conditions for the growth and metastasis of tumour is angiogenesis of tumour, inflammatory lesions, benign tumour, small blood vessels in tuberculosis are inflammatory reflection state of pulmonary vascular with normal structure [17]. They can present a proliferation or increasing change, which is significantly different from angiogenesis of lung cancer in quantity and quality. Yamashita et al. study showed that the relevance of enhancement degree of lung cancer with small vessel (0.02 mm<d<0.1 mm) was larger than that with big vessel (d>0.1 mm) and this small blood vessel was supposed to be an angiogenesis within the tumour rather than rest blood vessels of a host [18]. So CT enhanced form based on angiogenesis provides the pathological information of the lesion appearing with tumour angiogenesis generating [19].

In the numerous factors inducing the formation of blood vessels, VEGF is an important factor secreted by tumour cells, and it has the function of increasing vascular permeability and promotes angiogenesis generating [2]. The high expression of VEGF promotes lung cancer tissue to produce large number of capillaries whose diameter are less than 0.1 mm, and basement membrane is not complete, which makes the contrast agent easy to leak into the interstitial outside the blood vessel, increasing the retention of contrast agent in the interstitial. MVD is a quantification index of tumour angiogenesis, which is the count of capillaries and venules with simple method and unified standard. After proposed by Weidner, it was widely used in the study field of tumour blood vessels. This study shows that the correlation between VEGF and MVD exists.

COX-2 is an important rate limiting enzyme in the process of arachidonic acid four being converted into prostaglandin. Studies have shown that it displays enhanced expression in various tumour tissues, and have believed that it is closely related to the formation of tumour angiogenesis, tumorigenesis, invasion and metastasis [20]. In this study, COX-2 and MVD are correlated. Some scholars have pointed out that the one of the action mechanism of COX-2 is that when it expresses, the product of prostaglandin PGE2 increases, so as to stimulate the production of VEGF and induce tumour angiogenesis. In this study, COX-2 and VEGF are also related [21].

Manley et al. suggested that in the pathological specimens of lung cancer with obvious enhancement, it is seen that the central part of the nodules is multi vascular, and the relationship between the two are closely related [22]. Yamashita et al. have studied and found that MVD in lung cancer tissue was significantly related to the maximum CT enhanced peak value [10]. The above scholar’s conclusions are similar to the results of this study, and we use the linear regression analysis to analyse the relationship of CT enhanced peak value of lung cancer and expression of COX-2, VEGF and MVD. Then we conclude the result that CT enhanced peak and their expression has positive correlation. Because of lymph capillary network, vascular growth can directly affect the metastasis of lymph node in cancer. So the tumour invasion, metastasis and prognosis can be judged and implied according to CT enhanced peak.

The study found that COX-2, VEGF and MVD expression in lung cancer was positively correlated with CT enhanced peak, indicating that CT enhancement can provide a method of preoperative non-invasive diagnosis and evaluation of lung cancer for surgical doctors. However, the patients in this study were followed up for a short period, and had not yet revealed direct correlation between CT enhanced peak value, the expression of three immunological indexes and prognosis of patients, which needs further study. 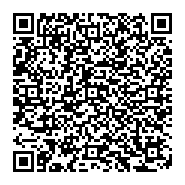