One of the key biological materials that can be used for disease diagnosis is the blood. The first step to examine the blood is separation of molecules in blood. In this work, the meander structure based microfluidic channel with different dimensions is designed for filtering applications. The performance characteristic of microchannel is analysed for symmetric and asymmetric geometries. The geometrical parameters such as Reynolds number and friction factor is computed and plotted. The symmetric microchannel geometry with width 250 μm gives the better performance when compared to all other microfluidic channel geometries.

Clinical assays are often performed by examining the components in blood. Main components of blood are WBC, RBC, Platelets and Plasma. The preliminary step towards the blood test is the separation of bio-molecules. Size based biomolecule separation and filtration is essential for many applications such as clinical analysis, biomedical and environmental assays and micro/nano manufacturing [1-3].

Microfluidic separation techniques can be classified as active and passive methods. An active method utilizes external force such as electric field [4-7], magnetic field [8,9], acoustic wave [10,11], optical interaction [12], etc., by using the particle’s electric, magnetic and optical properties. Lack of high throughput and time consuming is the major disadvantage of active devices however they produce high separation efficacy and selectivity.

Passive devices utilize the distinct physical properties of the particle such as size, density and cell deformability [13]. These methods have the simple design and fabrication and relatively high throughput with less input volume. Different methods of designing passive devices are cross-flow filtration [14-17], deterministic lateral displacement [18], centrifugation separation [19], etc. Jafar et al. designed the microfluidic device with pillars placed in the straight rectangular channel for separation of human blood's WBC based on their size [20]. The pillars are grown with space 6 μm. Since it is a dead-end filter, the larger molecules will get blocked at the pillar. To avoid the clogging problem, Yoon et al. developed the μ- sieving technique [21]. In this technique, piezoelectric actuator induces oscillatory vibration in the channel. But it is complicated due to actuator since it need external field.

For biomedical applications, cross flow filtration technique is employed which does not involve any external device to induce the flow of particles. The principle behind this crossflow filter is that the blood is forced to flow through microfluidic channel parallel to the surface membrane rather than into the filter as in the dead-end filtration. This results in better efficiency.

Daniel et al. and Xing et al. had extracted the DNA after cell lysis by using the cross-flow filtration [22,23]. Xing et al. had separated the WBC, RBC and platelets with a tortuous channel which is made of PDMS [22]. But some particles are adsorbed on the surface of PDMS which leads to poor efficiency.

In this work, to have better filtering efficiency, the meander shaped microchannel is designed with different geometries. Silicon material is used in this design because of its high biocompatibility even in micro/nano sized particles. The different geometries are designed and simulated by using COMSOL Multiphysics software. And the particle flow behavior through the microfluidic channel is also observed. 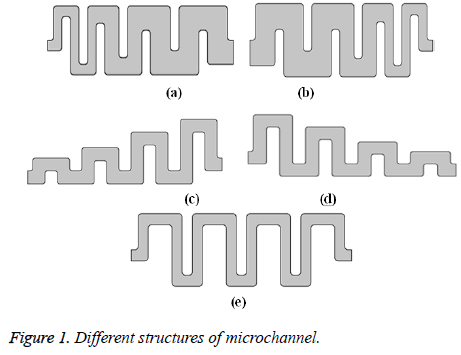 COMSOL Multiphysics software is used for simulating and analysing the different meander structures. Laminar flow and particle tracing module is used to track the flow and particle behavior through the microchannel. Silicon material is used as it has more biocompatible properties. Properties of Silicon are given in the Table 1. The blood is chosen as a sample and its flow rate is 0.2 ml/min throughout the channel.

According to the Bernoulli’s principle, the velocity is inversely proportional to pressure across the channel. So when the pressure is high, the velocity (movement) of the bio-molecules in blood will be low. Creating pores where the velocity is low can give high filtering efficiency for bio-medical applications. The different structure of microchannel is designed and simulated by using COMSOL Multiphysics. The Pressure and velocity profile distribution for different structures of microchannel is shown in Figure 2. 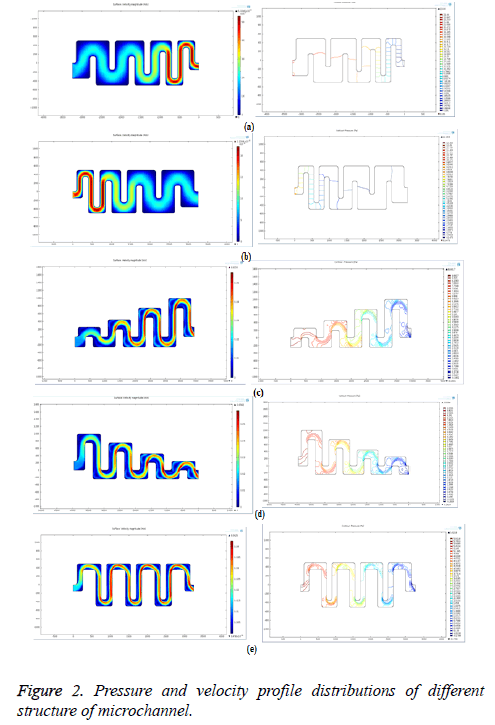 For bio-molecule separation, pores can be placed in the channel where the velocity of fluid is low. The velocity also varies depending on the dimension of the microchannel. So dimension of the structure should be determined for effective filtration. The microchannel with dimensions 150 μm, 250 μm and 400 μm were designed and simulated. The thickness of the channel is 100 μm. The gap between the parallel channels is 250 μm. The total length of the channel for width 150 μm, 250 μm and 400 μm is 9.25 mm, 9.45 mm and 9.75 mm respectively. The simulation result with various dimensions is shown in Figure 3. From the velocity profile distribution profile and pressure plots as seen in Figures 3a-3c. It is clear that the channel with width 250 μm gives the better results and flow is laminar throughout the channel. 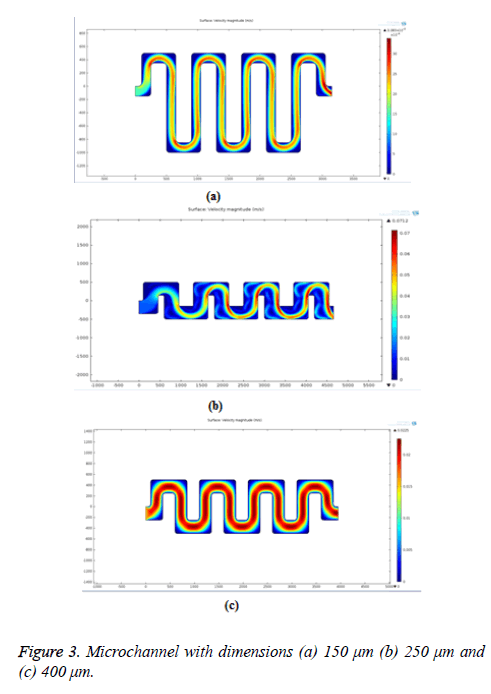 According to Bernoulli’s principle, the pressure will be high as the velocity is low. As the velocity flow (i.e., flow rate) through the microfluidic channel at the bend is low, particles will move with reduced speed. Hence placing pores at the bends in this microchannel will acts as a biofilter for filtering applications with high efficacy. 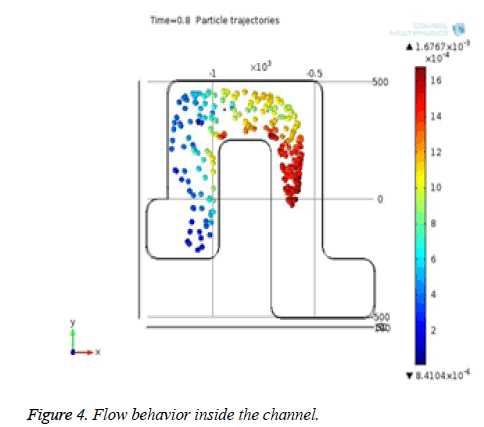 Figure 4: Flow behavior inside the channel. 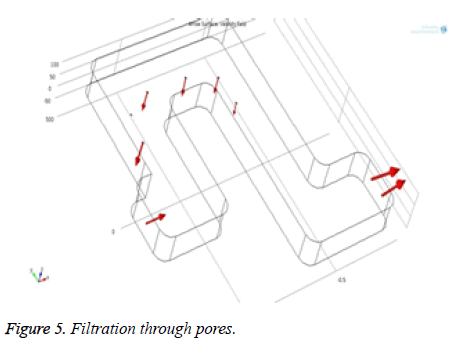 To have high efficient filtration of bio-molecules, the flow should be laminar. Reynolds number is used to find whether the flow through the channel is laminar or turbulent.

Where, ρ is density of fluid

v is the velocity of fluid through the channel

L is the length of channel

μ is the viscosity of fluid

For the flow to be laminar, Reynolds number should be less than 100 in microchannel else the flow is turbulent. Reynolds number is calculated for the channel with different width such as 150 μm, 250 μm and 400 μm and is given in Figure 6. 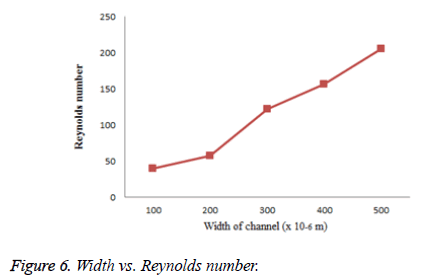 From the above figure, it is clear that Reynolds number is increased with respect to the width of the microchannel. Reynolds number with larger width leads to a turbulent flow.

When the fluid flows through the microchannel, there will be loss. This loss can be due to friction in the channel, pressure drop and losses at the bends. For fully developed rectangular channel with laminar flow, the friction factor is calculated as

Re is Reynolds number

a is aspect ratio

The aspect ratio and friction factor for different width of the microchannel is tabulated below in Table 2.

For meander structured microchannel, bend loss should be considered. Consider the single bend of the microchannel as shown below in Figure 7. 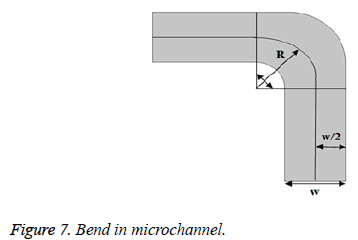 θ is the bend angle

R is the bend radius

w is the width of channel

Re is the Reynolds number

By finding the loss at a single bend, it is easy to characterize the loss across the microchannel with multiple bends. Pressure drop for the rectangular microchannel is

L is the length of the microchannel

Ρ is the density of fluid

U is the velocity of fluid

Dh is the hydrodynamic diameter

Dh=2wd/(w+d) Where w and d is the width and depth of the channel.

The loss due to the pressure drop is related as

Thus the performance of microchannel is studied for symmetric and asymmetric geometries. The geometrical parameter such as Reynolds number and friction factor is computed. The geometrical parameter and flow behavior of symmetric microchannel with width 250 μm gives the desired laminar flow for filtering applications. Placing different sized pores at each bend acts as a biofilter for filtering RBC, WBC, and Platelets.