The term stroke defines rapidly developing clinical symptoms and signs of focal loss of cerebral function lasting for more than 24 hours or leading to death with no apparent cause other than of vascular origin. Stroke is the third most common cause of death in developed nations and worldwide problem where nearly 4-5 mil-lion persons die from stroke each year. Current demo-graphic trend suggest that the Indian population will survive through the peak years of occurrence of stroke and stroke survivors in the elderly with varying degree of residual stability will be a major medical problem. Therefore early diagnosis, intensive treatment and prevention of stoke at any age will be the main strat-egy in national health planning [1]

A stroke occurs when the blood supply to the brain is suddenly interrupted or when a blood vessel in the brain bursts spilling blood into spaces surrounding brain cells . Symptoms include sudden weakness, con-fusion, loss of consciousness, edema and many others. The most common risk factors for a stroke are high B.P., cigarette smoking, heart disease and diabetes. Common lines of treatment of stroke are antioedema measures, anticoagulants and supportive therapy.

Administration of mannitol an osmotic diuretic has been reported to decrease cerebral edema, neurologi-cal deficit in several cases of ischemic stroke [2,3]. Mannitol has been used to treat human brain for more than 30 years [4].

The most common complications of mannitol therapy are fluid and electrolyte imbalances [5]. The action of mannitol is biphasic. An initial rapid fall in intracra-nial pressure is caused by plasma expansion, reducing blood viscosity. Cerebral blood flow increases and there is no compensatory vasoconstriction in normally perfused areas which reduces blood volume and in-tracranial pressure decreases [6]. Since mannitol is the commonly used therapy in stroke patients which has fallen in the question of recent times that it might cause electrolyte imbalance.

The clinical material for the present study comprised of 25 individuals of control group and 25 patients of stroke. All the stroke patients were in the age group of 55-85 years admitted in EMW-II. The work was done in the Department of Medical Biochemistry in col-laboration with the Department of Medicine of Gandhi Medical College, Bhopal. Fully informed consent was obtained from patients and controls of both the groups and the study was approved by ethical and research committee of Gandhi Medical College, Bhopal.

All values are presented as mean +/- SD.Statistical significance was analysed by Student t-test and corre-lations between variables were studied by using Pear-son’s correlation coefficient test. The level of signifi-cance was set at P<0.05. 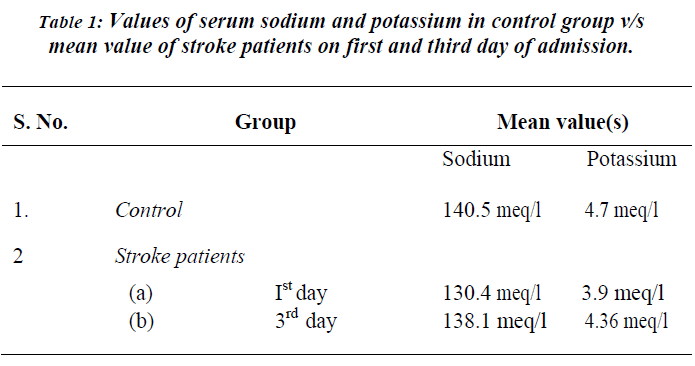 Table 1: Values of serum sodium and potassium in control group v/s mean value of stroke patients on first and third day of admission.

Values of serum sodium and potassium in control group v/s mean value of stroke patients on first and third day of admission.

From above observations the most appropriate dose of mannitol was found to be 300 ml at start for 6-8 hours and subsequent quantity varied from 100 to 150 ml depending on clinical condition of the patient. Case fatality, the proportion of dependent patients at the end of follow up and side effects were not found.

In this study bolus infusion of mannitol consistently led to an almost immediate and substantial marked rise in electrolyte levels of stroke patients in plasma. It was particularly remarkable that infusion of mannitol was effective although hyponatremia existed. Manni-tol acted as a potent diuretic drug.

In patients of stroke hyponatremia is due to increased hydration of cells and therefore sodium concentration becomes low. Significant variation was seen in the values of serum sodium and potassium on first day of admission compared to the control groups. It could be due to the fact that the blood brain barrier is permeable to water and small lipopholic molecules but impermeable to electrolytes. In the brain there are no lymphatics. Because of the small pore size of the normal blood brain barrier changes in serum electro-lytes has significant effects on water movement. Simi-lar results have been reported by Afifi and Yosry [7].

Significant variation was seen in the level of sodium and potassium between the first day before infusion of mannitol and on the third after infusion of mannitol because when mannitol was administered intrave-nously it was confined to extracellular space, only slightly metabolized and rapidly excreted by kidney. Approximately 80% appeared in urine. Mannitol in-duced diuresis by elevating osmolarity of glomerular filtrate and thereby hindering the tubular absorption of water. Similar results were obtained by Andrews et al [8].

It was found in this study that 300 ml at start and 100-150 mllater depending on clinical conditions of the patient was found to be sufficient to improve the clini-cal condition. The finding was in close conforrmmity to the previously reported results that lower dosage is quite effective with less chance of inducing hyperosmolar problems that have been noted with frequent high dose therapy [9].

The results further indicated that the mannitol can be successfully used in stroke patients to monitor serum electrolytes.

Although side effects were reported but as such no serious electrolyte imbalances were seen. Apart from mannitol many researchers investigated the effective-ness of several osmotically active substances like glycerol, hypertonic saline etc.

Further work may be needed to confirm the routine use of mannitol in stroke patients. However, Bereczki [10] has reported that neither beneficial nor harmful effects of mannitol could be proved.

Cerebral edema one of the major deteoriating clinical condition in stroke patients has been taken into con-sideration apart from monitoring serum electrolytes. The most rapid and effective means of decreasing cerebral edema is osmotherapy. Osmotic therapy is intended to draw out water out of the brain by an os-motic gradient. Mannitol is the most popular osmotic agent. Therefore infusion of mannitol was thought to decrease brain volume by decreasing overall water content, reducing blood volume by vasoconstriction and lastly causing plasma expansion leading to in-crease in serum electrolytes.

Mannitol showed potent effect on sodium than on po-tassium. No side effects were observed. Mannitol therefore may be safely given to patients of stroke as there found no complications of electrolyte imbal-ances till the third day.