Background: Diabetic nephropathy (DN) is a major micro-vascular complication of diabetes mellitus (DM) and it is the leading cause of end stage renal disease (ESRD) worldwide. The present study was carried out to estimate the serum TGF-β1 levels in T2DM patients with nephropathy.

Transforming growth factor beta (TGF-β) is a multifunctional cytokine which plays an important role in the development of nephropathy in type 2 diabetes mellitus patients. The TGF-β family consists of multifunctional molecules which are associated with cell proliferation, differentiation, migration and tissue remodelling processes [4]. Of these, TGF-β1 is known as the most fibrogenic molecule which stimulates the transcription of various genes in renal cells including mesangial, endothelial and tubular cells. The increase in synthesis and decrease in turnover of these proteins results in net accumulation of extracellular matrix. Accumulation of extracellular matrix components such as fibronectin, collagen types I, III and IV enhances the progression of glomerulosclerosis and tubulointerstitial fibrosis [5]. As DN is largely thought to be due to dysregulated ECM production and increased production of TGF-β induces synthesis and accumulation of renal extracellular matrix proteins such as fibronectin and collagen that are actively involved in renal fibrosis. Therefore, TGF-β1 may play an important role in the pathogenesis of DN [6].

This study was a cross-sectional study. Total subjects (n=75) were recruited during the period of December 2013-April 2015. The subjects were then divided in three groups; group 1: (n=25) healthy controls, group 2: (n=25) T2DM patients without nephropathy, group 3: (n=25) T2DM patients with nephropathy (Figure 1). Groups 2 and 3 subjects were recruited from diabetic and nephrology clinic at University College of Medical Sciences and Guru Teg Bahadur Hospital, Delhi, India. Age and sex matched healthy subjects as controls (group 1) were also recruited. Diagnosis of T2DM was based upon American Diabetes Association (ADA) 2011 guidelines [8]. DN was diagnosed on the basis of persistent micro-albuminuria (ACR 30-299 mg/g creatinine) or overt albuminuria (ACR ≥ 300 mg/g creatinine) on two separate occasions (6 w apart) and presence of diabetic retinopathy on the basis of National Kidney Foundation (NKF) 2012 guidelines [9]. Patient’s fundus examination was done by direct ophthalmoscopy to look for evidence of diabetic retinopathy. The study was approved by Institutional Ethics Committee-Human Research (IEC-HR) of University College of Medical Sciences and Guru Teg Bahadur Hospital, Delhi and written informed consent for participation in this study was taken from all participants. 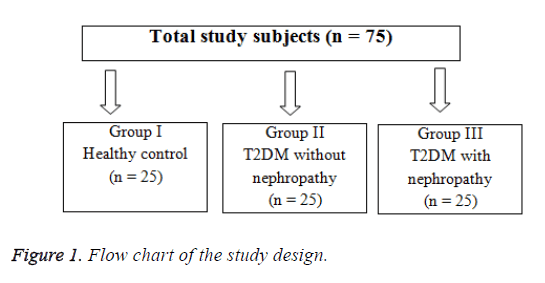 Group 3 (T2DM patients with nephropathy): Presence of DM, patients having evidence of diabetic retinopathy and evidence of microalbuminuria or overt proteinuria.

Exclusion criteria: Patients with DM due to type 1 or secondary cause, presence of urinary or systemic infection, patients taking aspirin and systemic steroids were excluded from the study.

Blood sample (3 ml) was collected for biochemical analysis. Blood was centrifuged at 1000 g for 15 min for plasma and serum separation. The plasma glucose, glycated hemoglobin (HbA1c), blood urea and hemoglobin were estimated in hospital laboratory at UCMS and GTB Hospital, Delhi.

Statistical analysis was carried out by SPSS version 20.0. Data were expressed as mean ± SD, median (IQR) or percentage (%) as applicable. Mean values of all demographic and biochemical parameters in all three groups were compared by one-way ANOVA followed by post hoc Tukey’s test or Kruskal-Wallis test used for not normally distributed data. Multivariate analysis was done using Bonferroni adjustment. Correlation was analysed by using Pearson’s correlation coefficient. p<0.05 was considered as the level of significance.

The demographic characteristics of the study subjects are listed in Table 1. Among the subjects thirty eight (50.66%) were males and thirty seven (49.33%) were females. Mean duration of diabetes mellitus was 6.29 ± 3.94 y in group II and 9.72 ± 3.18 y in group III. There was a statistically significant difference in the duration of diabetes between groups II and III (p=0.001). The mean age of subjects in groups I-III were 47.56 ± 7.96 y, 48.88 ± 7.73 y and 47.84 ± 9.22 y respectively. There was no statistically significant difference in systolic blood pressures (SBP) and diastolic blood pressure (DBP) between the groups. However, statistically significant difference was found in hemoglobin levels between groups I and III (p=0.02).

Biochemical parameters of the study subjects

Table 4. Correlation between serum TGF- β1 and other study variables.

Diabetic nephropathy (DN) is a major public health concern worldwide. Patients with DN are at high risk for progression to the end stage renal disease (ESRD). Progression to ESRD or other adverse outcomes could be prevented or delayed through early detection and treatment of DN. Hence there is a need to identify the development of DN at an early stage so that its progression can be prevented. Urine albumin to creatinine ratio (UACR) is the commonly used method to predict microalbuminuria in diabetes mellitus at an early stage. Microalbuminuria is associated with an increased rate of progression of diabetic kidney disease in patients with both type 1 and type 2 diabetes [12]. However, some reports have shown that microalbuminuria (30-300 mg albumin/g creatinine) is not a specific marker for development of diabetic nephropathy in type 2 diabetes at early stage [13]. Therefore, it is needed to identify new markers which can detect nephropathy at an earlier stage. Neutophil gelatinase-associated lipocalin (NGAL), urinary liver-type fatty acid binding protein (LFABP), kidney injury molecule-1 (KIM-1), interleukin-18 (IL-18), TGF-β1 and various others are being increasingly studied as newer markers for development of nephropathy [14].

A correlation study of serum TGF-β1 levels with HbA1c, fasting blood glucose and post prandial blood glucose were carried out in this study. We also observed a positive and significant correlation of serum TGF-β1 level with HbA1c, fasting blood glucose and post prandial blood glucose. Shaker et al. also reported a positive significant correlation between serum TGF-β1 and both glucose concentration and HbA1c [15]. Ibrahim et al. have also found that serum TGF-β1 was significantly increased in patients with poor glycemic control with variable degree of renal dysfunction as compared to those with good glycemic control and comparable degree of renal dysfunction. These finding conform the direct link between hyperglycemia and activation of TGF-β1. It is known that glucose stimulates de novo synthesis of diacylglycerol (DAG) and activated DAG then leads to activation of protein kinase C (PKC) which increases TGF-β1 synthesis in mesangial cell and tubular cell [17].

In the present study sample size was small. Further studies with large sample size are needed to validate our results. Other factors leading to glomerular injury were not studied which can falsely elevate the serum TGF-β1 levels.

Serum TGF-β1 is considered to be potential biomarker for identifying the patients of type 2 diabetes mellitus at risk for developing nephropathy.

The author (s) declares that there are no competing interests.

All authors declare that written informed consent was obtained from the participants.

All authors hereby declare that all experiments have been examined and approved by the appropriate ethics committee and have therefore been performed in accordance with the ethical standards laid down in the 1964 Declaration of Helsinki.