Study of educational environment trends of Iranian universities of medical sciences, during the 2008-2013, from the perspective of general medicine clinical students (levels of interns and externs)

Purpose: Purpose of this study is study of Students attitude and dispelling of its related barriers at educational environments by educational decision makers.

Design: This is a descriptive- analytical study.

Subjects: Sampling did randomly and during the evaluation external evaluation team headquarters of the ministry of health and from general medicine clinical students (level interns and externs) during the 2008 to 2013. The number of universities under study has been 102. The total sample size was 2,810 students. In order to reduce the errors and increasing the accuracy, students in basic science and physiopathology levels, were excluded from the study.

Measures: it this study it has been tried that governing space on the educational environment tested by DREEM (The Dundee Ready Educational Environment Measure).

Conclusion: This information show significant differences up to score of 200 standard questionnaires. Groups of 3 included scores of 101-150, that show more positive students concept of attitude than negative.

• Qualitative and quantitative development of Medical faculties in the world emphasizes on attention to medical sciences students and necessity of analysis of the educational process for future studies is necessary consistently.

• Attention to beneficiaries of medical universities leads to improve the performance of human resources and therefore, improve the performance of health systems. Importance of medical students view as final customer and attitude trend of these students to educational systems in new educational strategies (student-centered) is emphasized and can be used in the analysis of social trends in futures studies.

The main mission of medical universities is training specialists’ human resources, proportional to the surrounding community needs. Health maintenance and improve it and increasing of internal and external customers satisfaction are caused to provide the appropriate field for the development of any country. Prevailing atmosphere on educational environment of universities that are a learning field is a behavioral determinant variable and show communication of students with their educational environment. Understanding of the issue has a clear message for authorities of educational programs, that show changes trend and orientation is to which side. Understanding and take timely action leads to better educational outcomes from the perspective of students that are the main consumers of educational processes. Attention to beneficiaries of medical universities leads to improve the performance of human resources and therefore, improve the performance of health systems [1].

Table 1. Variety of produced questionnaires in the world.

Roff et al. at No. 27 the Journal of Medical teacher, have pointed out this questionnaire is student-centered, and about its advantage than other diagnostic tools of educational environments of medical sciences said: "It was created many tools during 1960, 1970, 1981 by educational experts that was not included in them changes in educational programs and student-centered at them, as the two main components. But an important feature of the DREEM questionnaire is evaluation of educational process like a predictive tool [3]. Research center and education development of Hormozgan University of Medical Sciences, in Iran during the study in 2012, that was published in the journal of medical sciences education, meanwhile, the comparison of educational environment of their medicine faculty From the perspective of studying students at grade of the physiopathology perform to students views differences, before and after integration plan in lessons of physiopathology grade and it shows that obtained results in the first year has led to significant upgrades students' perspective than educational environment. But in the second year, this attitude decreased. This issue indicates that, necessary stability from the results integration plan there is not from the perspective of medical students [9]. Purpose of this study is survey of the students’ attitudes and resolves its related obstacles and survey the educational process at educational environments by educational decision makers.

In this, descriptive-analytical study attitude of students in levels of training and clinical, during the years of 2008 to 2013 at the universities visited by the dispatched external evaluation team from the department of education of Health Ministry examined by using standard tools of DREEM. The study was according to Helsinki principals in ethics. All individuals were aware of the study. Translation and the questionnaire reverse translation performed. Although is not possibility of extension the results of this research to all university of medical sciences (more than 70 medical faculty in Iran) but emphasized that necessity attention to educational environments of medical universities from the perspective of students. The number of universities in the study and the number of participated students during these years has been shown in the Table 2.

Table 2. The number of universities and participated students.

Research society was selected randomly from clinical students in visited universities. Due to impossibility of created standard conditions, only studied available students in the visited clinical educational wards, The number of 500 people of students, studying in other disciplines that attended in place due to presence of external evaluation team of health ministry and completed questionnaire were removed from the study and too, the students at levels of basic sciences and physiopathology, due to research note to the attitude of clinical students were removed from the study. Sample size was 2810 students that were in the clinical studying and thoroughly completed the questionnaires, incomplete questionnaires removed from the study. Dispatched experts were Ms. Sakian, Mrs. Massah and deceased Mrs. Ghahremani, who attended with dispatched team in these trips and meanwhile explain and describe of the questionnaire, attempted to the distribution and collecting the questionnaires and at the end of the same conference and meeting. Data analysis done in the manually form.

Standard questionnaire of DREEM is included 50 questions which is directly related to educational environment and by using Likert scale, covers from completely agree up to completely opposite. Scoring in the questionnaire of DREEM is in this form: Number (4) for the strongly agree, number (3) for the agree, number (2) for the uncertain, number (1) for the Disagree and number (0) for the Strongly Disagree used. Altogether to 50 question of the questionnaire is awarded 200 scores that are indicative of the ideal educational environment for the medical students. Table 3 is a guideline for interpret the scores.

Table 3. Interpretation of scores of the DREEM questionnaire.

The final interpretation of number 0-50 is means very bad, and up 100 points is to this concept that is entered to the educational environment, many doubts. Points of 101 to 150 means that attitude of students changed to positive than to negative and points of 151 to 200 is considered to the concept of higher education environment. In general, standard questionnaire of DREEM explore five domains that is referred in the Table 4.

In this study, set aside all incomplete and empty questionnaires. And all students in nonclinical level were removed from the study. Number of removed individuals in non-clinical levels during the years of 2008, 2009, 2010, 2011, 2012, 2013, respectively are 119 people, 128 people, 136 people, 51 people, 19 people, 47 people and total of 500 people. Results of the study have been shown in five domains of the questionnaire of DREEM in overall chart (Figure 1). These results show that attitude of students to difficulties during the period of study except 2008, and only in the first year (2008) point is 134, that show, there are more positive attitudes to educational environment among studied students in that year and shows the general attitude of medical students during the years 2008 to 2013 in studied universities. In this study, results show that, highest positive feeling in all fields allocated to the domain of 2 that shows where, feeling of students than their educators. 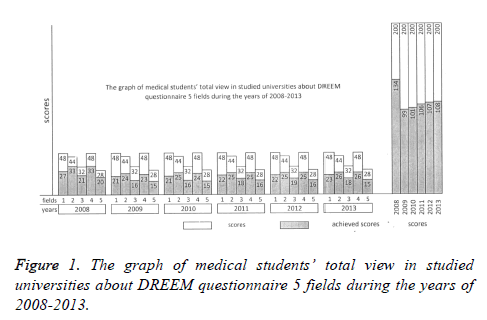 Figure 1. The graph of medical students’ total view in studied universities about DREEM questionnaire 5 fields during the years of 2008-2013.

Importance of medical students view as final customer and attitude trend of these students to educational systems in new educational strategies (student-centered) is emphasized and can be used in the analysis of social trends in futures studies. Students as direct beneficiaries of educational process are in case of question and polls in all processes and internal and external evaluations. In this study earned scores of DREEM tools is indicated of not so favorable conditions in system of studied university educational. Results from the other studies in the country such as study of Aghamolaei et al. [9] and Naderi et al. [10] in Bandar Abbas University of Medical Sciences in 2012, and other studies conducted with this standard tool in other medical universities also represents conditions not so favorable ruling educational environment from the perspective medical students during study years that next actions been done in order to improve the situation but its results not extracted.

Obtained results from the similar studies in medical universities in other countries such as Sri Lanka, Nepal, Nigeria, the United Kingdom and North America show better condition toward Iran. Revealed evidence in country reminds necessity of serious attention of authorities than attitudes changing of medical students to educational environment [1,5,8]. Study of Naderi, et al. shows that implementation of integration plan basic sciences and clinical sciences in some of studied universities, during the Study. Maybe Is One of the reasons for positive changes in the view of students than professors and show necessity of more research with this tool. Observed significant differences in this study with other similar studies in other countries such as Pakistan, Nigeria and Nepal there are in below comparison Table 5. The remarkable thing in this research and other similar research inside the country is that after a similar positive change what is occurred in Bandar Abbas has not been studied stability and lasting results and necessity of analysis of the educational process consistently in these intervention is essential.

DREEM questionnaire is standard and efficient tool that is used in 5 continents. Qualitative and quantitative development of Medical faculties in all the world emphasizes on attention to medical sciences students and necessity of analysis of the educational process for future studies is necessary consistently. Attention to the main clients of educational processes in medical science that are students, warns the necessity of revision and reform programs, and educational planning methods for the future. In the meantime, students attitude of surrounding and educational environment and conducted activities at where have essential.

Authors meanwhile thanks to all ones that helped us in data collection of this study, Cherish memory of distinguished expert of general medical council secretariat, deceased Mrs. Ghahremani. This study was part of a PhD. Thesis supported by Iran University of Medical Sciences, International Campus (No: IUMS/SHMIS/2014/6/7/93/d/105/1699).

Due to protection of moral issues and prevention of misunderstanding, the authors was refused from the mention the name of visited university.