Study of Certain Biochemical Parameters as Markers in Intestinal Ischemia

Intestinal Ischemia can be a devastating disease. Current management of Intestinal Ischemia has evolved from simply managing the grave consequences to more aggressive and proactive methods aimed towards recognizing and exploring early warning signs and preventing catastrophic complications. Most of the tissues can develop ischemia due to reduced blood flow which causes hypoxia. However, the most important are Heart, Brain and Gastrointestinal tract. The incidences of ischemia of these tissues is high.

4) Colonic ischemia [1]. All these types are associated with some common symptoms like, nausea, vomiting, transient diarrhea and bloody stools.

Intestinal ischemia may result from either arterial occlusive and vasospastic disease or from veno - occlusive disease. The most common form of intestinal ischemia is acute arterial ischemia. The risk factors for this type of ischemia are- Atrial fibrillation, recent myocardial infarction, valvular heart disease, Recent cardiac or vascular catheterization.

However all these studies suggest that these marker either lack specificity or sensitivity or both. In addition to above mentioned biochemical markers, some other diagnostic tools are also available. These tools include ECG, abdominal radiographs, Computed tomography and Mesenteric angiography. The “ gold standard “ for the diagnosis and management of acute arterial occlusive disease is laparotomy and for mesenteric arterial occlusion is mesenteric angiography.[2].

Alcohol dehydrogenase is a major enzyme catalyzing the biological oxidation of ethanol in mammals [12]. The researchers found that alcoholism causes liver damage ,and in alcoholics the main source of serum ADH is gastrointestinal tract and not liver [13].

The membrane bound γ -Glutamyl transpeptidase catalyzes the first step in the extracellular breakdown of glutathione into its constituent amino acids, which can then be transported into the cell and used to maintain the level of intracellular glutathione. γ -Glutamyl transpeptidase is abundant in tissues with a secretory or absorptive function , such as kidney and pancreas.[15].

The present study was carried out in Department of Biochemistry K. B. N. Institute of Medical Sciences, Gulbarga. and Dr.V.M.Govt.Medical College and Shri Chhatrapati Shivaji Maharaj General Hospital,Solapur

Selection of Control group : For the comparison purpose , 35 normal non-ischemia healthy persons were carefully selected in accordance with age and sex who were physically active and not taking supplementation eg - minerals ,vitamins .

Collection of Blood samples: Before giving any kind of therapy the blood samples were collected. Total 5ml of venous blood was collected antiseptically in a sterile plain bulb and allowed to clot. Then serum was separated and stored in deep freeze and following parameters were estimated. γ-Glutamyl transpeptidase (γ-GT) was estimated by Szasz method [17,18.19] (Kit method).

Alcohol dehydrogenase (ADH) was estimated by the method described by Kato et al. [20]. 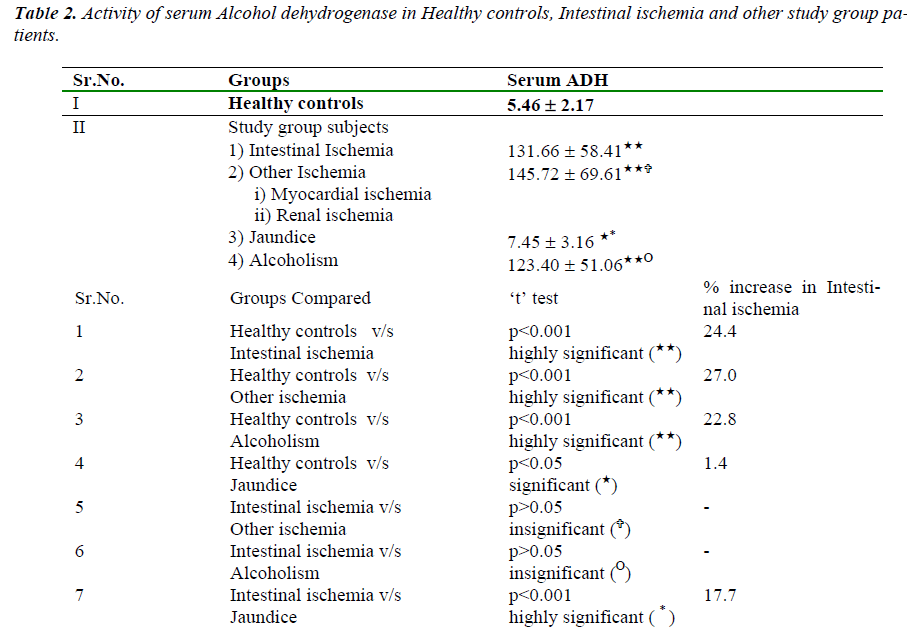 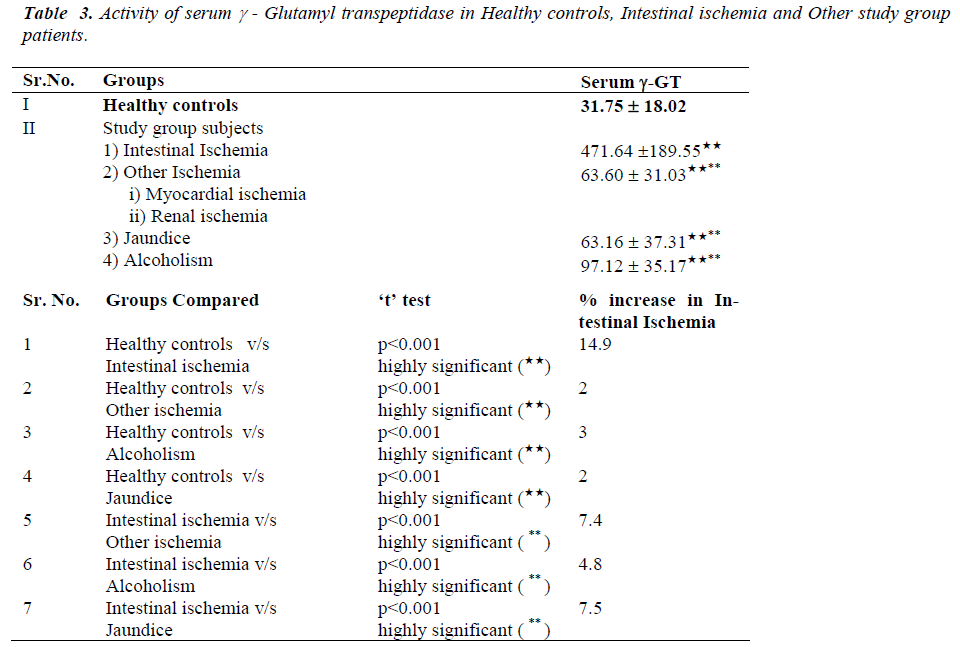 The studies carried out by various scientists about Intesti-nal ischemia in experimental animals showed that the rise in ADH level probably suggests that It leaks out from gastrointestinal lumen into the blood compartment due to an intestinal barrier dysfunction caused by intestinal ischemia [4].

The activity of Alcohol dehydrogenase in serum is found to be increased in Intestinal ischemia, Renal and Myocardial ischemia and Alcoholism. In fact the activity of this enzyme is more in other ischemias as compared to Intestinal ischemia. This shows that Alcohol dehydrogenase is not a sensitive or specific marker for diagnosis of Intestinal ischemia. Though it was not the aim of this study, the findings in this study about ADH do not agree with the findings of earlier studies. Thus, the present findings force to conclude that GI tract may not be the source- at least an important source of ADH. γ- Glutamyl transpeptidase is involved in Glutathione metabolism and transport of amino acids across membranes. Therefore, it is present in high amounts in those tissues which are involved in transport of amino acids. GI tract is one of them. Since GI tract is involved in absorption of large amount of amino acids resulting from digestion of dietary proteins, the activity of γ- Glutamyl transpeptidase in enterocytes is usually very high. When enterocytes are damaged, as in ischemia, the membrane permeability changes. This leads to leakage of large molecules like γ- Glutamyl transpeptidase into circulation [15,16].