Stratified classification of plant species based on venation state

This paper presents a novel approach for classifying leaf based on its five types of venation: palmate, parallel, pinnate, uninervous and reticulate. This novel approach is called Binary Directional Pattern (BiDirP); it outperforms traditional Edge Orientation Histogram (EOH) because it reduces the influence of outlier data or noise if the summation of distance in histogram method is used. Besides that, BiDirP index is closer to human perspective and easily categorizes leaves into their venation state as simply as matching their BiDirP index based on their BiDirP venation range. This method is less time consuming as it does not require powerful classifiers that train for longer time in order to get better performance. Overall, BiDirP outperforms the EOH by 11.48% in accuracy; for BiDirP, percentage accuracy of venation classification is 96.02% while it is 84.54% for EOH.

Leaf veins are hierarchical fine lines of different sizes and patterns found on the surface of the leaf [1-3]. They consist of vascular bundles made of two main transport tissues: xylem and phloem. The arrangements of leaf veins configure a unique and intricate pattern called leaf venation [4,5]. Leaf venation is an important feature for botanists and taxonomists to identify and catalogue a plant species. Leaf venation feature can become a more important key when the plant species is differentiated with similar leaf shape and has similar related characteristics [6-8]. For example, the delimitations of the genera Shorea and Hopea are supported by leaf venation where both of them are from the family Dipterocarpaceae. Besides that, leaf venation features are used to differentiate plant species from the same genus too, like Xanthoceroideae and Lepisanthes sensu lato which are from the genera Sapindaceae [9]. Also, the pattern of leaf veins gives important information to other fields such as hydraulic efficiency [10,11], theoretical modelling [12], phylogenetic relationship among plant species [13] and pharmacological approaches [14].

In this research, we used stratified sampling to cluster the population of plant species into homogeneous subgroup. Herein, we stratumed (sub-population) the leaf species by clustering them based on their lobes, shape, apixal, basal, margin and venation. However, we presented the clustering method based on their vein order types, which are: parallel, pinnate, palmate, uninervous and reticulate venations. The advantages of using stratified sampling are: (i) it reduces the search space, lowers computation and requires less memory capacity for finding a leaf species from a large population; (ii) it reduces the variability in enquiry search space which is able to produce more precise recognition; (iii) minimizes execution time and reduces time for recognizing a leaf species in subpopulation or smaller homogeneous sub-group; (iv) is more systematic.

There are some research findings on leaf are based on its density, the angle between veinlet, the thickness or diameter of veinlet and the number of veinlet [15]. These measurements can be easily affected by many other factors, for example the thickness or diameter of veinlet and the number of veinlet can be influenced by the age of leaf. The density of leaf venation is influenced by the resolution of image and the venation detection methods, so the extracted features are unstable and unreliable. However, in this research, Binary Directional Pattern (BiDirP) which is based on the botanical knowledge is utilized. This method is more human perspective and able to divide the leaf into sub-group which can reduces the searching space to match the query image with the sample leaf collected in database. The propose method is also advantageous when it comes to unclear leaf venation.

In this research, we used Flavia dataset to evaluate our algorithm performance. Flavia dataset encompasses 32 plant species with total leaf samples of 1907 which include 5 general venation states namely, pinnate, palmate, reticulate, parallel and uninervous. The leaf samples are either scanned or photographed, which the author did not state clearly in his article [15]. However, the samples are prepared in 1600 × 1200 resolution, which is considered as low for capturing the information of leaf venation, as the colour contrast of leaf vein and leaf tissue is considered not significant. Therefore, it is a challenging task to extract the information of leaf venation network.

To localize the edge direction efficiently, the lines extracted from pre-processing B are further divided into smaller segmented line called L. In this research, every line segment is bounded by two distinct end points with ten continuous pixels linked between start point Pstart and end point Pend. L is a subset of B, L B and L is a line segment, parameterized as Equation 1. The parameters t should be a natural number which is a whole number; that is, a positive number but excluded zero, in this situation, the t value is 10. 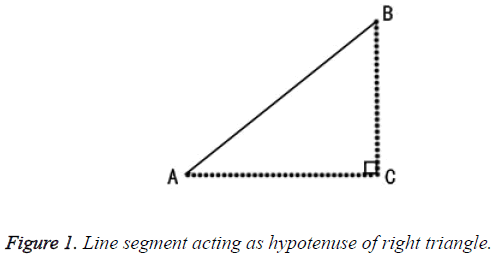 According to Clapham and Nicholson, slope is a statistic which indicates the direction and steepness for a line as presented in Equation 5. Equation 6 computes the total number of each point from line segment that deviated from the straight line with two distinct end points, Pstart and Pend. The parameter N represents the total pixel in line segment and i={1, 2, 3,.., N}. Finally, the total number of deviation, D determines the categorization of line segment either into directional line or non-directional line, according to Equation 7.

The frequency and number of occurrence of each directional unit is computed as presented in a graphical representation called edge histogram. The edge histogram is well described in the distribution of the venation direction. However, this descriptor is ideal with a complicated statistic representation that cannot be interpreted directly from human perceptive and easily influenced by false edge.

Converting them into binary pattern

The binary edge histogram is then arranged to 3 × 3 square matrix denoted as DP, according to the directional pattern. In which the centre of the matrix located at DP22 represents the non-directional curve. The left uppermost located at DP11 represents 3π/4 or 135º. The right uppermost located at represents the angle of π/4 or 45º and so forth. Below is the equation to get the index of Binary Directional Pattern (BiDirP). Figure 2a displays the angle in circle and Figure 2b depicts the 3 × 3 square matrix of angle code according to its direction. Figure 2c represents the range angle in angle code, angle ± 45/2. Figure 3a displays the arrangement of binary edge histogram based on the angle code in matrix form as presented in Figure 2. Figure 3b presents the binary pattern map in the exponential of two according to the angle code presented in Figure 2. The parameter Dc denotes the total number of column element in matrix and the parameter Dr denotes the total number of row element in matrix. 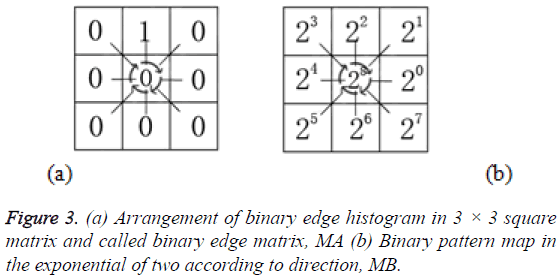 Figure 3: (a) Arrangement of binary edge histogram in 3 × 3 square matrix and called binary edge matrix, MA (b) Binary pattern map in the exponential of two according to direction, MB.

Table 2: The index of BiDirP for each venation state.

In this research, we test our novel approach BiDirP with flavia dataset. The average venation classification accuracy for parallel vein using BiDirP and EOH is approximately indifferent at about 95%. BiDirP outperforms EOH with 13.74% for uninervous-veined. For reticulate-veined, BiDirP defeats EOH with 21.83% and achieves 96.98%. The accuracy for discriminate palmate-veined leaves by using EOH is even worse compared to BiDirP. EOH only reaches 61.21% which is 38.34% lower than BiDirP. BiDirP achieves higher classification accuracy which is 91.45 and EOH achieves only 70.59% in pinnate-veined. Uncertain leaf venation either pinnate-veined or reticulate-veined; therefore, both methods are achieved at 100% accuracy. Overall, BiDirP outperforms the EOH by 11.48%, where venation classification percentage for BiDirP is 96.02% and EOH, 84.54%.

This paper has presented a novel approach for leaf venation classification that outperforms a traditional Edge Orientation Histogram in terms of time usage and accuracy percentage. Our algorithm is tested by Flavia dataset of which the sample plant species comprises five basic different venation states namely pinnate, parallel, reticulate, palmate and uninervous. The Stratified Sampling approach divided the plant species into several venation state groups which reduced the searching space when undergoing plant identification. The suggested novel approach named BiDirP has promising result, as an advanced traditional Edge Orientation Histogram with 11.48% accuracy on leaf venation classification. The other leaf part such as leaf margin, apex, base, shape, lobes and sinuses are suggested using Stratified Sampling approach too, as subdivide them into group before undergo numerical analysis can largely reduce the search space to match plant species.