Heart Rate Variability (HRV) and Pulse Rate Variability (PRV) are non-invasive techniques to assess the function of autonomic nervous system and presently, PRV is considered to be a good alternative to HRV. We investigated a different approach to potentially show that the second derivative of Photoplethysmography signals (SDPPG) can measure PRV with accurate detection of “a” waves through re-sampling technique which normalizes the signal and ensures the presence of “a” waves in all its recurrences. PPG and ECG signals of 28 records, each of 10 second duration that varies from healthy adults to unhealthy and aged patients with different morphologies such as regular and irregular heart rhythms, low and varying amplitudes, obtained from the large-scale openly available database from PhysioNet were employed for the performance evaluation and validation. The performance of “a” wave detection algorithm resulted in 99.75% sensitivity and 100% positive predictivity. In this study, a-a intervals of SDPPG signals and R-R intervals of ECG signals were used to determine PRV and HRV indices such as the standard deviation of heart beat interval (SDNN) and the root-mean square of the difference of successive heart beats (rMSSD). HRV and PRV indices thus obtained from ECG and SDPPG were compared by linear regression analysis. Highly significant correlations were found between PRV indices(r=0.902207) estimated through SDPPG measures and the corresponding HRV indices (r=0.825032), substantiating that PRV can be an alternative for HRV.

Heart rate variability (HRV) refers to the beat-to-beat alterations in heart rate and it provides a measure of the control of heart rate exerted by the autonomic nervous system [1]. Metrics of HRV are widely used in medical diagnostics and physiological research. Abnormal patterns of HRV have been associated with coronary artery disease [2], sudden death or heart failure [3,4]. HRV metrics are usually based on non-invasive measurements of cardiac function using electrocardiography (ECG) or photoplethysmography (PPG). A precise point is identified in each cardiac cycle and inter-beat interval (IBI) between those points in adjacent ECG heartbeats or PPG pulse beats is measured to estimate HRV metrics and pulse rate variability (PRV) respectively. Some researchers have correlated PRV and HRV [5,6] confirmed PRV as a good surrogate of HRV and some directly used PRV as an alternative of HRV [7], though some studies suggested that PRV derived from PPG is not a surrogate for HRV derived from ECG [8].

Heart beat and therefore HRV can be calculated from PPG contour itself, but reliable detection of heart beats is much more challenging owing to various noises and artefacts and hence, an efficient algorithm has to take the above challenges into account. The analysis of PPG waveform was easily quantified by the second derivative of PPG signal (SDPPG) that allowed an easier and accurate interpretation of heart beats by clearly defined peaks than the original PPG signal. In SDPPG analysis, five distinctive waves have been identified for each cardiac cycle (heartbeat) as “a” (early systolic positive wave), “b” (early systolic negative wave), “c” (late systolic re-increasing wave), “d” (late systolic re-decreasing wave) and “e” (early diastolic positive wave), as shown in Figure 1. The a-wave seems to be the most suitable for heart rate calculations because of its amplitude and sharpness. 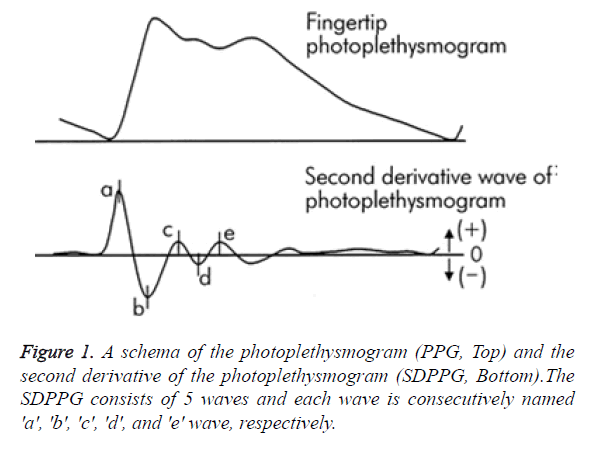 Taniguchi et al. [9] applied a-a interval of SDPPG to determine heart rate as an alternative to ECG. Mohamed Elgendi et al. [10] detected “a” waves in SDPPG signals, generating blocks of interest followed by a dynamic event duration threshold and utilized a-a intervals for evaluating HRV indices, standard deviation of normal to normal intervals (SDNN) and root mean square of the difference of successive heart beats( rMSSD). The blocks thus formed may be undesirable, if it has noise and there is a probability that points of interest (“a” waves) might be missed, if these blocks are eliminated. Moreover, any change in threshold values would affect the performance of “a” detection algorithm.

The objective of this study was to substantiate that PPG signal can be used as an alternative for ECG in the assessment of HRV through SDPPG. A new SDPPG analysis algorithm for an automatic detection of “a” wave is proposed in this paper as accurate detection of a wave is vital to assess HRV. The algorithm exploits re-sampling technique to ensure “a” waves are present in all its recurrences and does not involve any threshold values, eliminating the setback on the performance of the algorithm, if parameters are altered. The rest of this paper is organized as follows: materials and methods are elucidated in the second section; the third section is dedicated to system evaluation and result analysis; the last one is for concluding remarks.

HRV estimate by various time domain measures proposed in [11] suggested that HRV can be calculated using the mean standard deviation of the length of the cardiac cycle that are determined either from the RR intervals of a short ECG segment or the a-a intervals of the SDPPG. Peak detection method was adapted to measure ‘a’ peaks in SDPPG to comply with the detection of R peaks in ECG, for subsequent estimation of PRV and HRV respectively. The estimation of HRV involves three major steps: accurate detection of a-waves in SDPPG and R peaks in ECG, computation of a-a intervals and RR intervals and calculation of the PRV and HRV respectively. 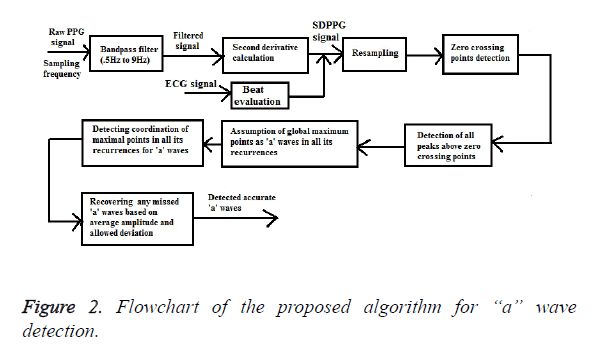 Figure 2. Flowchart of the proposed algorithm for “a” wave detection.

An efficient band pass filter is used to eliminate highfrequency noise that exist above 9 Hz and low-frequency noise which causes baseline wandering that exist up to 0.5 Hz to condition the raw PPG waveforms, as most of the energy is below 9 Hz. Figures 3A and 3B illustrates a raw PPG signal and filtered PPG signal with baseline drift eliminated respectively. The second derivative was applied to the filtered PPG signal using Equation 1 and Figure 3C shows SDPPG of the filtered signal. 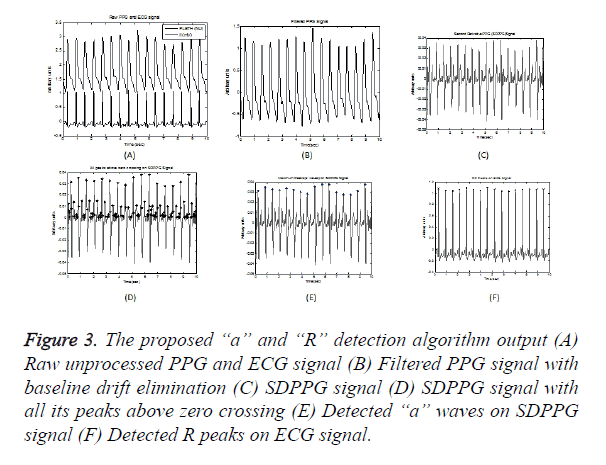 ECG signals are used to validate the beat detection with reference to its annotation available in the database. If the PPG waveform is clear and ECG annotation is present, a beat was taken into account based on its presence or absence. Many researchers utilized searching window [12] and authors in [13] generated blocks of interest using two event-related moving averages to locate ‘a’ waves and these waves might be missed either in the selective window or blocks of interest. Generally, bio signals related to heart activity are aperiodic but are recurring i.e., the harmonic components of two successive recurrences of the PPG signal and its derivatives can be at different frequencies, where recurrence is the duration from peak to peak. The lengths of PPG and SDPPG signal recurrences are normalized by re-sampling to ensure that all the harmonic components are processed in the same way such that the number of samples is same for all its recurrences and aligned with other recurrences of the signal. The Mth samples of each period are then averaged.

The algorithm seeks the positive zero-crossing points in each beat of SDPPG, assuming all peaks as “a” peaks as shown in Figure 3D and evaluates onsets and systolic peaks in accordance with ECG annotation. It also assumes global maximum point as ‘a’ wave, after co-ordinating with all other maximal points in all its recurrences. It is found that the average amplitude of “a” wave ranges from 0.0148 to 0.048 and the deviation has been fixed as ± 0.005. In case, if a point is not detected in any time interval, it attempts to relocate it based on its average amplitude and deviation of ± 0.005, starting from first beat to last beat, thereby recovering any missed ‘a’ points. Figure 3E shows detected “a” waves.

The R peaks in ECG signal is estimated by setting an amplitude threshold of 0.63 of its maximum amplitude. The peaks above this threshold level are detected as R peaks for every beat in accordance with the approved ECG annotations in the database as shown in Figure 3F.

Where N is the total number of successive a-a intervals and i is a counter ranging from 1 to N.

Evaluation of “a” waves

Two standard statistical parameters, sensitivity (Se) and positive predictivity (P)+ given in Equations 6 and 7 were estimated for performance evaluation of ‘a’ wave detection.

TP is the number of true positives (a wave detected as a wave), FN is the number of false negatives (a wave not detected) and FP is the number of false positives (non-a wave detected as a wave). If the PPG waveform is evident, beat detection was taken as TP for its presence, FN if absent and FP for an imperceptible PPG waveform. For instance, all global maximum peaks that have moving point coordination were chosen to affirm as TP or discard them as FP or FN. The algorithm accounted pointed peaks (high amplitude) for the ‘a’ wave and the statistical quality of the signal like mean and standard deviation does not change considerably with time.

Regular heart rhythm, irregular heart rhythm and varying amplitude non-stationary PPG signals are analysed as shown in Figure 4. However, it accounted a failure, with exactly one FN, as shown in Table 1, cause of the failure being low amplitude ‘a’ waves. It also earned no failures, leading to a positive predictivity of 100% and a sensitivity of 99.76% revealing the robustness of the algorithm. 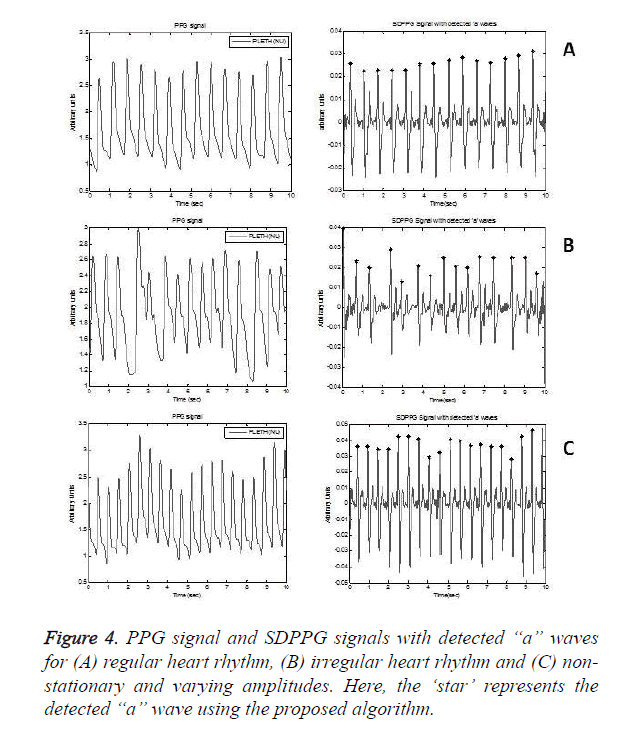 Table 1. Overall performance of the “a” wave detection algorithm.

Evaluation of HRV and PRV

Correlation coefficient analysis was used to examine the association and strength of the two quantitative variables. Table 2 shows SDNN and rMSSD index calculated for 28 subjects. PRV features are highly comparable to those of HRV, as observed from Figure 5a and Figure 5b which shows a strong positive correlation between the two HRV indices RMSSD and SDNN with r=0.902207 and r=0.825032 for PPG and ECG signals respectively. Figures 5c and 5d shows a negative correlation between the heart rate and HRV indices, with rMSSD index is more negatively correlated with the HR (r =-0.09805) than the SDNN index (r =-0.0098).

Table 2. PRV and HRV indices calculated from SDPPG and ECG. 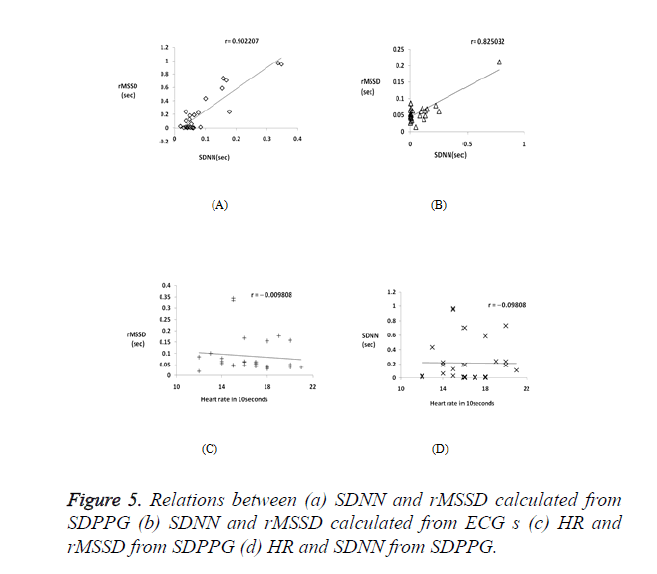 HRV is the effect of various influences of autonomic nervous system on heart rate, extensively obtained from ECG signals but it is limited in practical applications such as homecare and mobile medical assistance due to inconvenience of measurement. Therefore, PRV derived from SDPPG has been verified in terms of ease and convenience for HRV measurement. In this paper, we have proposed SDPPG analysis algorithm to report accurately a points to calculate a-‘a’ intervals for PRV measurement and correlated with HRV indices similar to those obtained using ECG.

Many researchers analysed the performance evaluation of ‘a’ waves either in a small dataset or for selected patients like normotensive young subjects. The proposed algorithm was tested on a large-scale openly accessible database from PhysioNet for performance evaluation with different morphology such as regular and irregular heart rhythms, low and varying amplitudes and from healthy adults to unhealthy and aged patients and achieved 99.75% sensitivity and 100% positive predictivity ensuring its robustness. Moreover, the resampling technique eliminates the need for optimising threshold values and also ensures the presence of ‘a’ points in all its recurrences compared to [8], where the undesired blocks are essentially eliminated using threshold values. The proposed approach has provided better detection accuracy as compared to the existing methods for the detection of ‘a’ waves in SDPPG signals. However, it is necessary to study and further validate this method on a larger dataset before applying it for clinical purposes.

The results from time domain (SDNN and rMSSD indices) and the correlation coefficient analysis prove that PRV can be a substitute for HRV. There is a strong positive correlation between SDNN and rMSSD indices, with respect to both SDPPG and ECG, indicating that the 10-second recordings are adequate to reliably measure both PRV and HRV. These indices also show a negative correlation with heart rate, with the rMSSD index being more negative. The current study strongly suggests that PPG signals can be used as a good alternative to derive HRV parameters quantified through SDPPG. Future work will involve investigation of stress in depressed patients through PRV.