Statins utilization and price variations-comparison between Ukraine and Bulgaria

Introduction: High prevalence rate of CVD and high rate of CVD deaths attributed to high cholesterol leads to increased statins utilization. The aim of this study is to analyse the difference in prices between generic and innovator and utilization of INNs of statins available in Bulgaria and Ukraine.

Materials and Methods: The study is retrospective and observational analysis of changes in prices. On total, 7 INN and 18 dosage forms are included in the study. Utilization of statins has been measured in DDD/1000 inh/d.

Results: The results reveal considerable price differences in the prevailing part of the observed dosage forms between 2013 and 2016 and higher price variations. Two of the lowest and three of the highest prices have not been changed in Bulgaria. For the same period in Ukraine ten lowest and five highest prices have decreased, while one lowest and six highest have increased. Statins utilization is much higher in Bulgaria than that in Ukraine.

Conclusions: Prices of statins tend to decrease in Bulgaria more than in Ukraine. In both countries there is a slight tendency of reduced utilization, whereas the consumption of statins in Bulgaria is much higher than that in Ukraine. The study confirms that medicine utilization depends on prices and the health policy in the countries.

Utilization of lipid lowering agents varied among countries-in 2003 the highest is in Ireland and Norway, and lowest in Italy. It has increased in all observed countries e.g. by 274% in Ireland and by 56% in France between 2000 and 2003 [6].

Despite the high prevalence of CV morbidity and mortality a little is known about the statins utilization and their prices in BG and UA. The data about statins utilization and prices are necessary from policy point of view to estimate their affordability to the population, and to minimize the risk of underutilization. High prevalence rate of CVD deaths attributed to high cholesterol, the increased prescribing and utilization, and their link to price levels and price variations, has prompted our interest in this study.

The study is retrospective, observational analysis of changes in prices. On total, 7 international non-proprietary names (INNs) and 18 dosage forms of statins (Anatomic therapeutic chemical (ATC) code C10AA) are observed during 2013-2016.

Retail prices of all authorized statins in Bulgaria were collected from the official registry of the National council of pricing and reimbursement [7] and from market research system “Pharm standard” of the company “Morion” in Ukraine [8].

The lowest and the highest priced statins were compared by calculating the ratio between them, as follows:

The statins utilization was calculated for every year using the World Health Organization (WHO) formula [11]:

Our study founds a large variation of the statins prices during 2013-2016. As a whole, prices vary more in Ukraine, while they are steadier in Bulgaria (Table 1).

Table 1. Number of observed products and those with price changes between 2013-2016.

The price ratio was calculated for 3 INNs of statins (simvastatin, atorvastatin, and rosuvastatin), as they are available on the market under more than one trademark (Table 2). The medicines with the same trade name were excluded. Generic to originator price ratio in BG for all INNs varies between 0.09-0.77, while in Ukraine it is from 0.06 to 0.74 over the observed period of time (Table 2).

*the lowest and highest ratios are bolded

Utilization of statins in DDD/1000/inh/d is presented on Table 3. 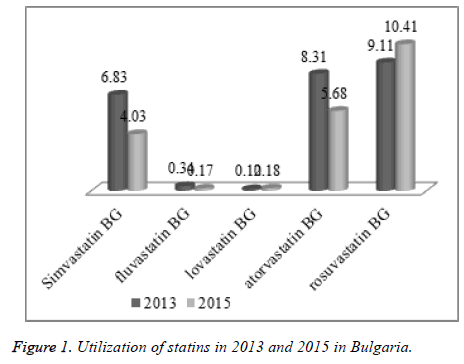 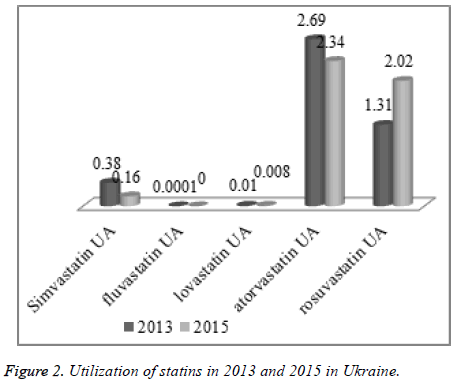 Development of the pharmaceutical market in Bulgaria has led to an increased number of generics in the last few years. A previous study confirms that a large number of generics were approved, the prices decreased significantly, and simultaneously changed medicines utilization. This process is more evident in the developing groups and new approved INNs [14] where generic and therapeutic competition influence the market environment, they could even realize budget savings [15]. A previous study showed that eight new generic atorvastatin and ten new rosuvastatin were included for reimbursement during 2009-2013, which led to price decrease and utilization growth. This study confirms that the development of generic policy, price stability, and low rate of patient co-payment are required in order to prevent patients’ non-adherence and improve health outcomes.

Similar study in Ukraine estimated an increased number of a statin group by 30.4% from 2012 to 2015. The highest growth of rosuvastatin (129%) was recorded. The prices for domestic statins increased on average by 42.1%. The average prices also increased on the market especially for imported products [16].

One of the reasons for the permanent prices decrease in Bulgaria could be the strict price regulation. The National Council on Pricing and Reimbursement (NCPRMP) [17] approves medicine prices based on the lowest price among the 17 reference countries. The manufacturer price of the generic product should not exceed 70% of the price of the originator.

The generic to originator ratio expresses the price contrast and the results of the introduced generic policy in a country. The difference between the most and least expensive dosage forms, established on a market is probably the result of the manufacturer’s policy and the health economic environment. The countries (e.g. Denmark, Sweden) which have strict generic policies, tend to have a higher difference between originator and generic prices [19].

A higher price difference between generic and originator could affect medicines utilization and resulting in increased morbidity and cardiovascular mortality [16].

The study including nine European countries shows the highest rate of increase of statins utilization in Ireland-from 26.54 to 99.29 DDD/1000 inh/d during 1997-2003 [6]. The utilization of statins in our study is far below those values, especially in Ukraine.

This is the first comparative study of both price changes and utilization of statins among Bulgaria and Ukraine, the countries of the highest CVD morbidity and mortality in Europe. It tested the relationship between prices and utilization and confirms that the price stability affects medicines utilization, affordability and compliance to therapy.

Prices of statins tend to decrease in Bulgaria more than in Ukraine. In both countries there is a slight tendency of reduced utilization, whereas the consumption of statins in Bulgaria is much higher than that in Ukraine. The study confirms that medicine utilization depends on prices and the health policy in the countries. Some factors such as price variability, differences between the lowest and the highest priced medicines, and the rate of co-payment could affect statins consumption and prescribing habits.