The need to reduce our dependency on fossil fuel and emission of greenhouse gases contributing to global warming has for years prompted governments and institutions to search for alternative sources of energy. A number of countries, including the U.S. and Brazil have used corn grain and sugarcane juice converted into ethanol as an additive into gasoline fuel for years [2,4]. These two countries produce almost 70% of the world’s supply of biofuel; however, new suppliers are emerging in the European Union and Asia [5]. Presently, China ranks fifth among the major producers of biofuel [6]. Similar to other countries, corn is the main feedstock for Chinese biofuel production [6]. More recently, sorghum is gaining importance as a potential source of biofuel due to its fermentable sugars from the juice and bagasse of sweet sorghums and from the cell walls of high-biomass genotypes, especially in the United States [2]. The U.S. Enviromental Protection Agency has set a target of 16 billion gallons for biofuel and cellulosic biofuel production by 2022 and sorghum is one of the crops expected to contribute to reach the goal [5]. Sorghum has a number of advantages as a bioenergy crop. Sorghum is often grown on marginal land with limited inputs of water and fertilizer when compared to corn, and this drought tolerance generates potential for high yield of biomass and sugars [2,7,8].

Furthermore, with the expected increase in the world’s population to around 9.1 billion [9], crop production outputs must be increased. Annual cereal production, including sorghum, will have to be increased to at least 3 billion tons by 2050, which is significantly higher than the current output of 2.1 tons [9]. Sorghum supplies the minimum daily calorie needs for hundreds of millions of people living in drier regions of the tropics and its global appeal will continue to widen as consumers seek alternate grains for a healthier, gluten free, addition to the diet [1,10]. Currently, the major consumers of sorghum are China, Nigeria, and Mexico with 8,450, 6,450, and 6,400 thousand metric tons, respectively [11]. Although sorghum is well adapted to abiotic stresses, increase in sorghum productivity will require limiting the impact of biotic stresses such as noxious weeds, insects, and diseases incited by fungi, viruses, nematodes, and bacteria. Plant pathogens causing anthracnose, grain mold, smuts, downy mildew, and rust can negatively impacted sorghum productivity and profitability, especially under extended drought or humid conditions [1]. In addition, biofuel crops require high plant densities which will increase the vulnerability of sorghum to foliar and stalk diseases such as the hypervariable anthracnose pathogen, Colletotrichum sublineola.

Globally, the most devastating foliar disease, anthracnose incited by the fungus, C. sublineola reduces photosynthate accumulation, which is detrimental to maximizing yield and harvestable biomass [12-14]. Colletotrichum sublineola infects all above ground parts, leaves, stalks, panicles, and grain with the foliar infection which can occur at any developmental plant stage been the most frequently observed [15,16]. Manifestation of the symptom on the leaves will depend on the cultivar and environmental conditions and may appear as small circular to elliptical spots or elongated lesions, and fruiting bodies (acervuli) appearing as black spots in the center of the lesions [16]. Figure 1 shows an infected leaf with acervuli. Losses in grain yield of up to 50% may occur under severe foliar infection on susceptible cultivars, while panicle infection can result in losses ranging from 30-50% [16-18]. Reduction in grain number and size are the primary cause of losses in yield [16]. Deployment of naturally occurring resistance genes is the most effective management strategy for limiting pathogen impact. However, the hyper-variability of C. sublineola requires continuous evaluation of Sorghum germplasm to identify new and diverse resistant sources [13,14]. A number of C. sublineola pathotypes had been documented from different regions in the U.S. and abroad [14,18-23]. Determination of the virulence patterns of different isolates of the anthracnose pathogen and using available molecular techniques to identify markers associated with geographic distribution of pathotypes will provide researchers and breeders with tools needed to guide the deployment of appropriate resistant host varieties across sorghum growing regions in the U.S. and abroad. Large numbers of anthracnose resistant sources have been identified around the world [13,24]. Though the sorghum gene pool is diverse, knowledge is still lacking on the distribution and effectiveness of resistance genes in diverse environments. Also, inheritance of anthracnose resistance is still not well understood as multiple studies have reported different loci involved in the inheritance mechanism with different modes of action [1,25-27]. Inheritance studies on the resistance in SC137, SC166, SC991, SC120, and SC748-5 crossed with the susceptible parent BT × 623 were reported by Mehta et al. [14] to be controlled by a single dominant gene. Cuevas et al. [6] noted that segregating F2 populations of SC112-14 × PI609251 evaluated against a number of C. sublineolum pathotypes, indicated that resistance in SC112-14 is governed by a single dominant gene. These two resistant sources were mapped in chromosome 5. A dominant gene (Cg1) derived from cross between SC748 and BTx623 was mapped at the distal region of chromosome 5 in sorghum by Perumal et al. [12], while Cuevas et al. [6] mapped the resistance in SC112-14 in Chromosome 5 but in a different locations than the Cg1. 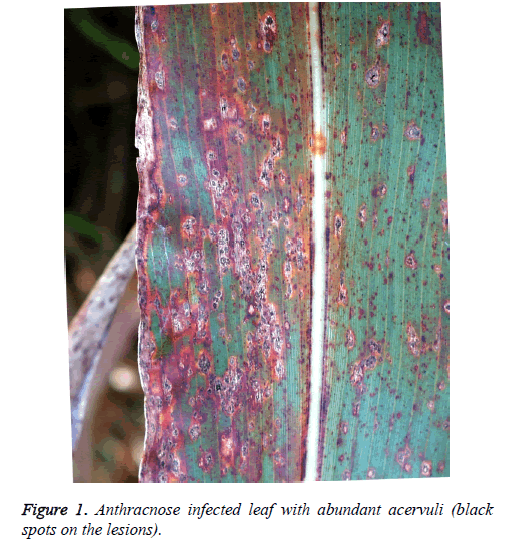 In conclusion, countries will have to implement policies in which the need for energy based biofuel using edible feed stocks, food demands, and grain prices are sustainable for the ever-growing population. One contributing element is the availability of new genetic and genomic information for resistance in sorghum and sorghum pathogens that will accelerate plant breeding, resulting in disease-resistant sorghums that lower input costs while reducing economic losses due to diseases. Similar approaches, beginning with the plant pathologists and integrated with molecular biologists and plant breeders will address other limitations to sorghum yield and adaptability from other current and emerging disease threats. These advances will increase future sorghum production in new and existing growing regions for both human consumption and biofuel.