SOCS3 is involved in cardiomyocyte hypertrophy induced by Ang II

This study is to explore the effects of two Suppressors of Cytokine Signalling (SOCS) members, namely SOCS-1 and -3, on the regulation of cardiomyocyte hypertrophic response induced by Angiotensin-2 (AngII). Rat neonatal cardiomyocytes culture were cultured and treated with Angiotensin II. After SOCS1 and SOCS3 inhibition by si-RNA transfection, the cellular hypertrophic response indicated by cell size and protein contain per cell were determined. AngII stimulation dramatically increased the cellular size, protein content and the SOCS-1 and -3 mRNA expression levels in a dose dependent manner. The SOCS3 protein levels were augmented by AngII treatment while the SOCS1 remain unchanged. SOCS3 si-RNA induced a 75% reduction in SOCS3 protein expression without changing SOCS1 protein. With SOCS3 si-RNA transfection, cells showed a dramatically reduction in cell surface and protein content, while the inhibition of SOCS1 did not change the cellular hypertrophy after AngII treatment. These data suggest that SOCS3 involved in Ang II induced cardiomyocyte hypertrophic response.

Cardiac hypertrophy is a response of myocardium to the stimulation of mechanical load and neurohumor factors [1], which is caused by hypertension, coronary heart disease, myocardial infarction and congenital heart disease etc. [2,3]. Cardiac hypertrophy often leads to congestive heart failure and severe arrhythmia and is a regarded as a common complication of cardiovascular disorders [4].

Renin-Angiotensin System (RAS) is one of the most important reasons causing cardiac hypertrophy [5]. As a major and key player of RAS system, Ang II facilitate the growth and proliferation of a variety of cardiovascular cells such as the cardiomyocytes, cardiac fibroblasts and vascular smooth muscle cells, leading to the increase in total protein content of cardiomyocytes and in protein synthesis rate, which results in cardiac hypertrophy [6]. In recent years, the role of Ang II in the mechanism of cardiac hypertrophy has been investigated intensively.

Suppressors of Cytokine Signalling (SOCS) are a family of cytoplasmic proteins [7]. SOCS-1 and -3 are two important members of SOCS family which negatively regulate the intracellular cytokine signaling pathway, including Janus kinase (JAK)/Signal Transducers and Activators of Transcription (STAT), Ras/MAPK and ERK, and PI3K/Akt [8].

The role of SOCS-1 and -3 in cellular hypertrophic response, particularly in cardiomyocytes, has not been well elucidated. Previous studies show that SOCS-1 gene transfer accelerates the transition to heart failure through the inhibition of the gp130/JAK/STAT pathway [9]. Another study shows that absence of SOCS-3 in the cardiomyocyte increases mortality in a gp130 dependent manner accompanied by contractile dysfunction and ventricular arrhythmias [10]. SOCS-3 is a mechanical stress-inducible gene in cardiac muscle cells and that it directly modulates stress-induced gp130 cytokine receptor signaling as the key molecular switch for a negative feedback circuit for both myocyte hypertrophy and survival [11]. In this study we cultured rat cardiomyocytes explore the effects of two SOCS members on the regulation of cardiomyocyte hypertrophic response induced by Ang II.

The whole hearts from neonate rats were isolated, minced and rinsed in hood by using the method invented and patented by Dr. Xuwei Hou (patent number: CN 101955884 A and CN 101955884 B). Briefly, the whole hearts from neonate Wistar rats (age less than 3 days) were isolated, minced and rinsed in hood. Five to six cycles of digestion using collagenase (95 U/ml) (Sigma Aldrich, Bornem, Belgium) and 0.6 U/ml of pancreatin (Sigma Aldrich, Bornem, Belgium) were performed. At the end of each cycle, the suspension was centrifuged and the supernatant collected, pooled, centrifuged and resuspended in the cardiac medium containing DMEM and M199 (volume ratio: 4:1) [12].

Total RNA was prepared using TRIzol reagent (Invitrogen) according to the manufacturer’s instructions. cDNA was synthesized with 1 μg of total RNA by reverse transcriptase. qRT-PCR analysis was performed with LightCycler (Roche Diagnostics) to determine the mRNA levels of SOCS1 and SOCS3. The following primers were used in qRT-PCR: SOCS1 (forward, 5’-GCCATCTTCACGCTGAGC-3’; reverse, 5’- GCCATCTTCACGCTAAGGGC-3’); SOCS3 (forward, GCCACCTACTGAACCCTCCTC, reverse TCCGACAGAGATGCTGAAGAGTG) and β-actin was used as an internal control with primers as follows (forward, 5’- CAGCCTTCCTTCTTGGGTAT-3’; reverse, 5’- CTGTGTTGGCATAGAGGTCTT-3’).

Cells were plated at 4 × 105 cells per well on 6 well plates the day before the transfection. The SOCS3 siRNA and SOCS1 siRNA and scramble sequences was transfected using GenMute siRNA and DNA Transfection Reagent (SignaGen, USA) using 10 nM si-RNA together with 2 uL GenMute™ reagent according to the manufacturer’s protocol. The sequences of MsiRNAs are as following: SOCS-1 siRNA (sense sequence, GCAUCCGCGUGCACUUUCAUU) and SOCS3 (5’- GCGTAATACGACTCACTATAGGGAGACTCAAGACCTT CAGCTCCAA-3’ and antisense 5’- GCGTAATACGACTCACTATAGGGAGATTCTCATAGGAG TCCAGGTG-3’). The culture medium was changed after 8 h and the cardiomyocytes were incubated for 48 h to perform functional experiments or lysed in Trizol Reagent® (Invitrogen, Carlsbad, CA, USA) for western blot analyses.

After si-RNA transfection, the cells were then treated with Ang II (5-500 nM) for 48 hours to induce cellular hypertrophy [13,14].

To examine changes in cell morphology and cytoskeleton, cells were fixed in 4%paraformaldehyde, stained with FITCconjugated Phalloidin (Sigma) for 30 min and mounted in Vectashield with 4’, 6-diamidino-2-phenylindole (Vector Laboratories, Peterborough, UK). Cellular hypertrophy was evaluated by measuring cardiomyocytes surfaces using a digital image analysis system (Leica QwinV3, Leica Microsystems Ltd., Cambridge, UK). Five random fields (with approximately 10 to 15 cells per field) from every sample were averaged and expressed as μm2/cell. All experiments were repeated three times.

Measurement of protein contain per cell

Each experiment was performed at least three times and the data are presented as mean ± SEM for the indicated number of separate experiments. Student’s t-test or one-way ANOVA analysis was used to compare the mean of each group with that of the control group in experiments. All analysis was performed by SPSS 17.0 System. Results were considered to be significant if the P-value was less than 0.05.

As expected, AngII stimulation dramatically increased the cellular size and protein content per cell in a dose dependent manner. AngII started to stimulate cardiomyocyte hypertrophy at 100 nM, and reached the maximum pro-hypertrophic effect at the concentration of 500 nM (Figure 1 and Figures 2a and 2b). We detected the hypertrophic markers, e.g. ANP, OPN and TGF-β1 using western blot assay. Our data show that Ang II treatment induced increased ANP, OPN and TGF-β1 protein expression levels in cultured cardiomyocytes as opposed to control cells (Figure 3). 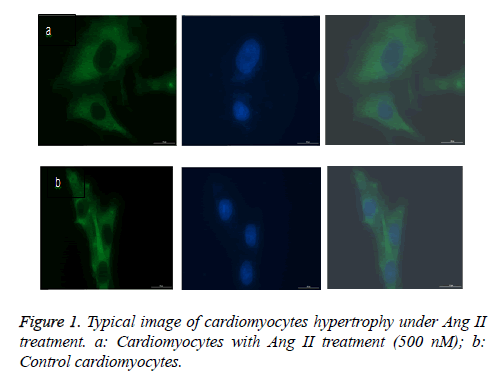 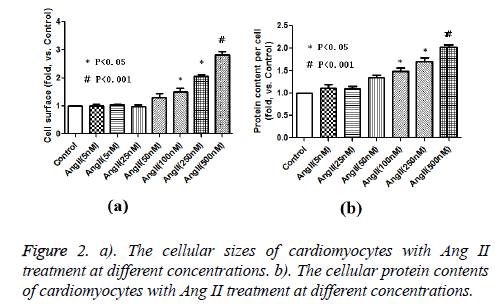 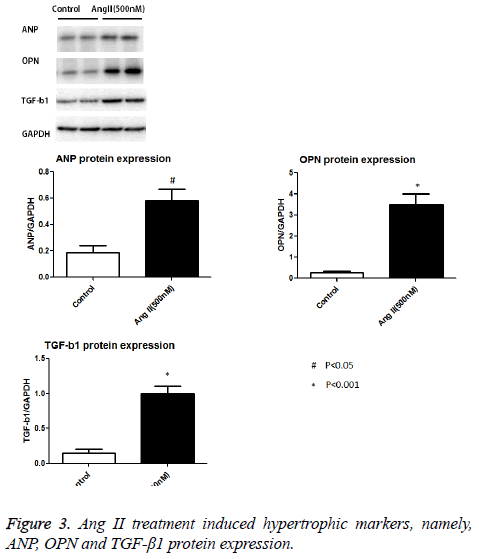 We performed Western blot and real time PCR to detect the SOCS-1 and 3 mRNA and protein expressions in cultured cardipmyocytes after Ang II treatment. Our data show that Ang II dramatically increased the SOCS1 and 3 mRNA expression levels compared to untreated control cells in a dose dependent manner. SOCS-1 mRNA expression level increased about 8 times while SOCS-3 mRNA increased 25 times (Figures 4). As for the protein expression, we found that the SOCS-3 protein levels were augmented by Ang II treatment while the SOCS-1 remains unchanged after treatment (Figure 5). 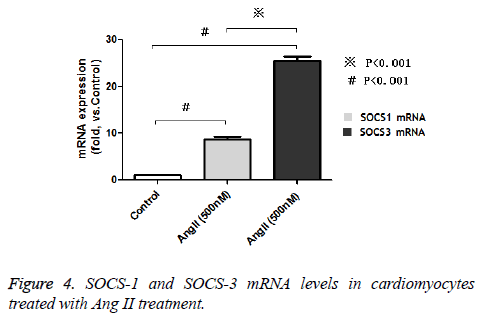 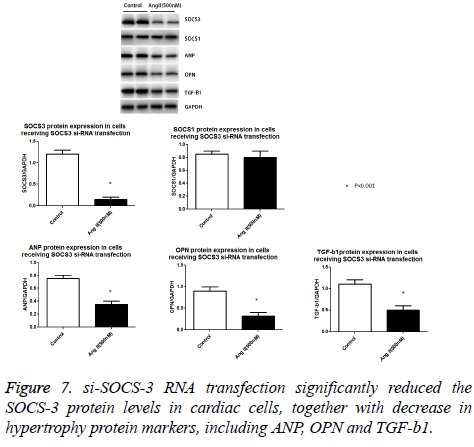 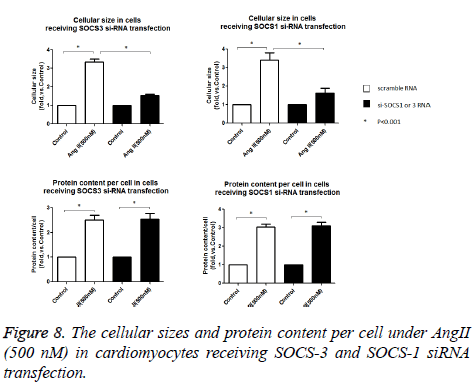 Figure 8: The cellular sizes and protein content per cell under AngII (500 nM) in cardiomyocytes receiving SOCS-3 and SOCS-1 siRNA transfection.

In this study, we found that inhibition of SOCS-3 totally abolished the Ang II induced cardiomyocyte hypertrophic response. The inhibition of another SOCS family member, SOCS-1, however, did not change the cellular hypertrophy after Ang II treatment. For the first time, our data provide clear evidence that SOCS-3 is essential in the cardiac hypertrophy induced by Ang II.

Calegari et al. reported that SOCS3 is constitutively expressed at a low level in rat heart and neonatal rat ventricular myocytes and Ang II at a physiological concentration enhances the expression of SOCS3 mRNA and protein, mainly via AT1 receptors [16]. Consistent with their findings, we also observed that Ang II increased SOCS3 protein expression in cultured VSMCs. In Calegari’s study, pre-treatment of rats with a specific phosphorthioate antisense oligonucleotide to SOCS-3 can reverse the desensitization to angiotensin signaling, as detected by a fall in c-Jun expression after repetitive infusions of the hormone. In our study, we observed that Ang II increase the cellular surface, per cell protein content, accompanied by increased expression of three hypertrophy related proteins, including ANP, OPN and TGF-β1 protein in cells. Also, we found that the Ang II induced SOCS-1 and SOCS-3 at both mRNA and protein levels. It remains unclear if Ang II affects the expression of other SOCS family members.

More importantly, we find that SOCS-3 inhibition by si-RNA technique dramatically restored the cellular surface, per cell protein content back to basal level and reduced expression of three hypertrophy induced by Ang II. In contrast, SOCS-1 did not reverse the Ang II induced hypertrophy in cardioyocytes. The mechanism underlying this phenomenon remains unclear. Previous studies reveal that SOCS-3 is constituted by cytokineinducible proteins that modulate receptor signal transduction via tyrosine kinases, mainly the JAK-STAT pathway [17]. Given the importance of JAK/STAT pathway in regulating the cardiac cell hypertrophy, we hypothesis that the inhibition of SOCS-3 may interfere with the JAK-STAT pathway, thus alleviate the pro-hypertrophyic response of Ang II. Study focusing on the signal transduction pathway of SOCS3 and JAK/STAT under Ang II stimulus is still on-going now.

Several limitations should be addressed in this study. Firstly, we reported only the preliminary finding and there is no detailed molecular mechanism involved. Secondly, we did not understand why only SOCS-3, rather than SOCS-1, alleviated the hypertrophic response by Ang II. Thirdly, the other SOCS-3 family members are not tested in this study.

All authors listed in this manuscript participated in the design and coordination of the study and made substantial contribution to the intellectual content of the project to be included as authors. All authors read and approved the manuscript.