11β-hydroxysteroid dehydrogenase a ubiquitous enzyme, which is known to be responsible in modulating the glucocorticoid levels in the tissues [5,6]. In the testis, 11β-HSD converts excess corticosterone (CORT) to the inactive form; thereby protects the testis from the adversed effect of CORT especially on T production [7]. Corticosterone, on the other hand has been reported to have a direct inhibitory effect on testicular steroidogenesis [8]. In certain treatments, the oxidative activity of 11β-HSD has been correlated with plasma levels of T [9]. Conversely, suppression of the 11β-HSD activity has been shown to be associated with low plasma levels of T or viceversa [10].

Smilax calophylla (Akar dawai) is found mainly in the northern part of Peninsular Malaysia. The local folks consume decoction of Akar dawai rhizome as a male sexual tonic. Indeed, the Smilax plant has been reported to be a potential aphrodisiac [11]. Studies on some other Smilax plants have documented the steroidal components of the plant rhizomes [12,13] as well as of the various effects of the Smilax plant extract [14,15]. Our previous study revealed that the water extract of Akar dawai rhizome (AD) could overcome the suppressive effect of exogenous CORT on testicular 11β-HSD activity and plasma levels of T in rats, and it is proposed that AD possibly acts by blocking glucocorticoid receptors [16].

Bilateral adrenalectomy was performed as per the reported method [17]. Its completeness was inspected and verified at the time of killing. The rats were housed together in a temperature controlled environment (27-29°C) with 12:12 hour light-dark cycle. Normal rats were given tap water as drinking water whereas 0.9% normal saline was substituted to ADX rats. Animal were sacrificed 24 hours after the last treatment schedule between 8.30 and 9.00 a.m.

The Medical Research and Ethics Committee of the Universiti Kebangsaan Malaysia (UKM) had approved methodology used in the present study.

Testes were removed immediately from the sacrificed animals, dissected and homogenized with Krebs solution containing glucose. The enzyme assay was performed as previously described [9] by incubating 250 μl tissue homogenate with 12nM 3H-B and 200 μM NADP at 37°C for 10 minutes (all steps were carried out on ice unless stated otherwise). The reaction was stopped and steroids were extracted by addition of ethyl acetate. Steroids were then separated by thin layer chromatography (TLC) and identified under ultraviolet light. The radioactivity was determined in β-liquid scintillation counter. 11β-HSD oxidative activity was expressed as percentage conversion of corticosterone to 11-dehydrocorticosterone.

Animals were anesthetized by diethyl ether and 3-4 ml blood was collected in heparinized tube. Ether was used to minimize marked fluctuation of plasma level of T [18]. Hormone levels in the plasma were analyzed as previously reported [4,7]. Plasma T levels were measured using commercial RIA kit (Coat-a-count, Diagnostic Products Corp. CA). The intra- and interassay variation coefficients of the total T was within 10%.

Data were analyzed using Statistix Programme. The data for 11β-HSD oxidative activities were expressed as mean ± standard error of mean (SEM) while for plasma T levels were expressed as mean ± 95% confidence interval (CI). Differences between groups were analyzed by analysis of variance (ANOVA) and student t-test. The differences were considered significant at p<0.05. Statistical analysis was made in accordance with the previous report [19].

The 11β-HSD activity was significantly higher three days following adrenalectomy (ADX3D), (p<0.01). However, the plasma T levels remained unchanged compared to that of the controls (Fig. 1). Moreover, a significant reduction in 11β-HSD activity (p<0.001) as well as plasma T levels (p<0.001) was recorded following seven days of adrenalec tomy compared to that of the control value (Fig. 1). 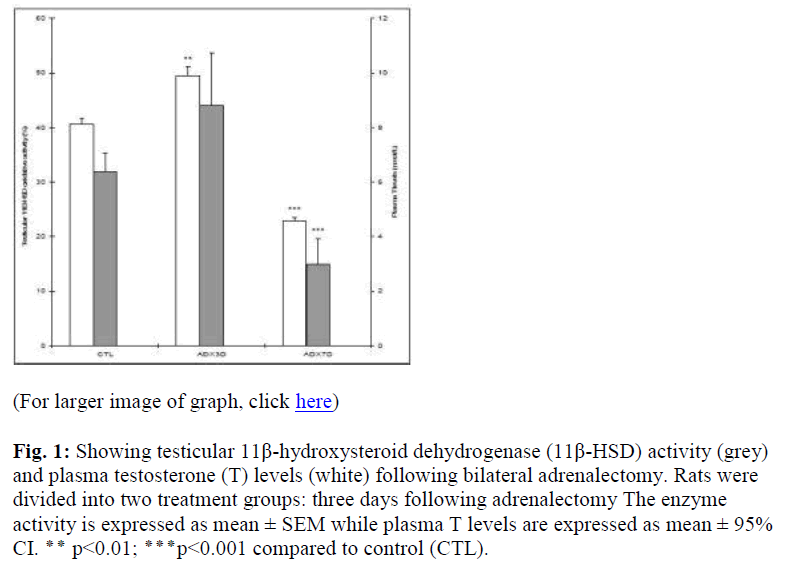 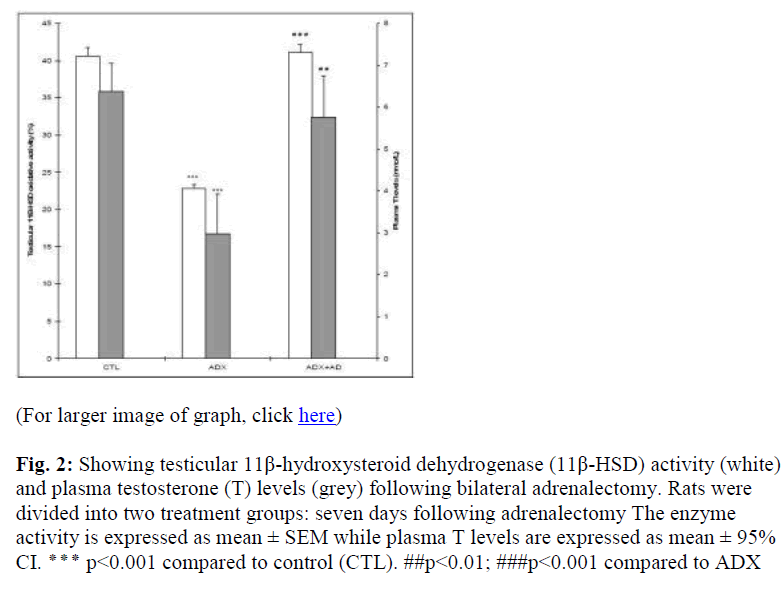 Adrenalectomy has been reported to reduce luteinizing hormone levels (LH) as well as the levels of plasma T in male rats [1]. We have observed that administration of AD (8mg/kg BW) in rats for three consecutive days elevates plasma T levels, without altering the testicular 11β-HSD activities. On the other hand, administration of AD (8mg/kg BW) for seven days, although significantly decreases the 11β-HSD activity, yet the plasma T levels remain unchanged [16]. Results of our experiment show that three days following bilateral adrenalectomy the 11β-HSD activity has been elevated, however the plasma levels of T remain unaltered. It has been reported that seven day after bilateral adrenalectomy, both the parameters are reduced significantly [4,10].

Treatment of the water extract of AD to adrenalectomized rats has been found to maintain the activity of 11β-HSD and plasma levels of T almost identical to controls. Treatment of AD for seven consecutive days in normal rats has similarly been found to counteract the inhibitory effect of exogenous CORT, on the 11β-HSD activity and plasma levels of T. Infact, AD is proposed to act via glucocorticoid receptor in affecting both parameters [16]. It has been suggested that 11β-HSD activity and plasma T levels regulate each other in certain conditions [9,10]. In conclusion, our finding suggests that water extract of AD is possibly able to overcome the effects of bilateral adrenalectomy on testicular function.

We wish to thank Prof. Dr. Johari Mohd. Saad research group from the Faculty of Medicine, University of Malaya for extracting and supplying the Smilax calophylla (AD) water extract. The present research was funded by IRPA research grant 06-02-02-0081. A special thanks to Professor Dr Amar Chatterjee, Faculty of Medicine, UiTM for his critical comments in the preparation of this manuscript.