Skin, hair and nails as pointers to neurocognitive disorders in children: our experience.

Introduction: The word ectoderm is derived from Greek “ektos” which means “outside” and “derma”, meaning “skin”. This differentiates in to the nervous system, teeth, skin, sweat glands, hair and nails. As these structures develop at almost the same time, diseases affecting the nervous system share changes in one or more of these sites, which serve as an easy marker for diagnosis.

Patient and methods: Patients with various neurological illnesses seen by the authors in the last five years were evaluated for ectodermal markers. They all underwent appropriate investigations to establish the diagnosis.

Observation: Total numbers of patients were 955. Male to female ratio was 1.5:1. Mean age was10 ± 4.5 years. Out of these patients, clues from general examination helped in either giving a specific diagnosis or helped in formulating differential diagnosis in 78 (8.2%) patients. The conditions belonged to degenerative, immunological, metabolic, infective, inflammatory and toxic causes.

Conclusion: Ectodermal organs serve as a window to neurological diagnosis in about 8.2% children presenting with Global Developmental Delay (GDD) and this clinical clue narrows down the differential diagnosis in children in the first decade of their life.

Both the skin and nervous system develop from the ectoderm, which could be one of the reasons that many diseases of the skin show their counterpart in the nervous system and vice versa. This information when carefully applied will bring down differential diagnosis in disease situations to a relatively limited list. Generally, these disorders are categorized as Phakomatoses, immunological, infectious and genetic diseases [1]. The diseases for which the markers can be used include: Neurocutaneous disorders, disorders associated with impaired immunity, stroke, neuropathy, meningitis or meningoencephalitis, vesicular lesions, ecchymoses, nonpalpable purpura, and petechiae, café-au-lait spots, amyloidosis, rheumatoid arthritis, cutaneous vasculitis, photosensitivity, and melanoma [2]. Skin forms 15 to 20% of body weight and is the largest human organ. Hair is a skin appendage which undergoes cyclical change and develops in the 3rd month of gestation. Nails are also modified epidermis and start developing from the 10th week of gestation. Therefore, skin and its appendages are capable of carrying markers of a large group of systemic diseases [3].

Patients of pediatric age group (In first and second decade of their life) seen at our Centre in last 5 years from March 2012 to March 2017 at National Institute of Mental Health and Neurosciences (NIMHANS) , Karnataka state, South India, were reviewed. Patients in whom skin, hair, nails and teeth helped in diagnosis or evaluation were tabulated. The patient's clinical details and bedside markers were identified and diagnosis was tabulated. Written consent taken from all patients.

Total numbers of patients were 955. Male to female ratio was 1.5:1. Mean age of 10 ± 4.5 years. A majority of the patients seen had refractory seizures and Global Developmental Delay as part of post-hypoxic and post-encephalitis sequelae. Among the rest, clues from general examination helped in either giving a specific diagnosis or in formulating differential diagnosis in 78 (8.2%) patients. Skin was of use in the following cases: Neurofibromatosis-14, Tuberous sclerosis–19 [13,14], Sturge Weber syndrome–9 [15], Phenylketonuria–6 [16], Dermatomyositis–2 [17], Adrenoleucodystrophy–4 [18], Mitochondrial cytopathy–4 [19], Marinesco-Sjogren syndrome–1 [20], Sjogren-Larsson syndrome–1 [21], Ethyl malonic aciduria–1 and GM1 gangliosidoses–2. Teeth and nail were of clue in the following: Wilson’s disease–2, Tetracycline toxicity–1, Congenital syphilis–1, Arsenic toxicity–2 and Lead toxicity–1. Hair was of diagnosis in the following cases: Phenylketonuria–6, Biotinidase deficiency–3, Mucopolysaccharidoses–2, Giant axonal neuropathy–1 and Menkes kinky hair syndrome–1(Figures 1- 3). 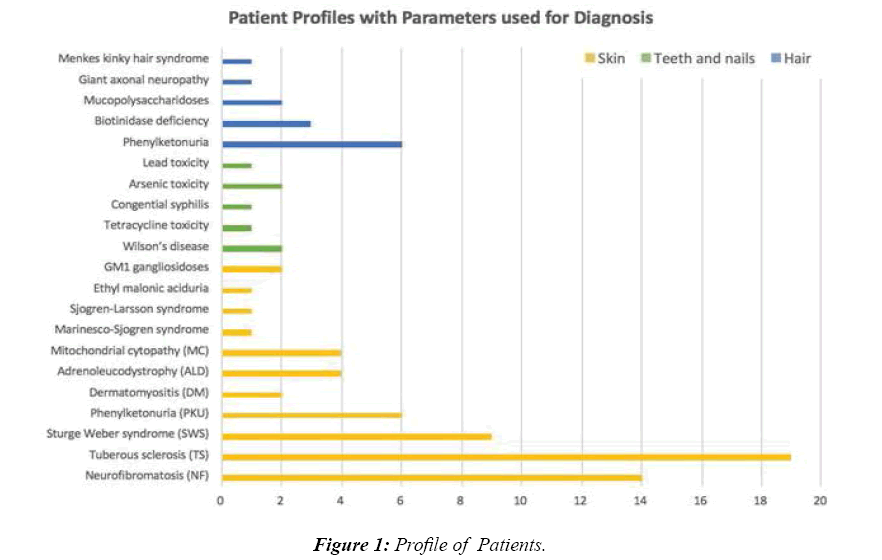 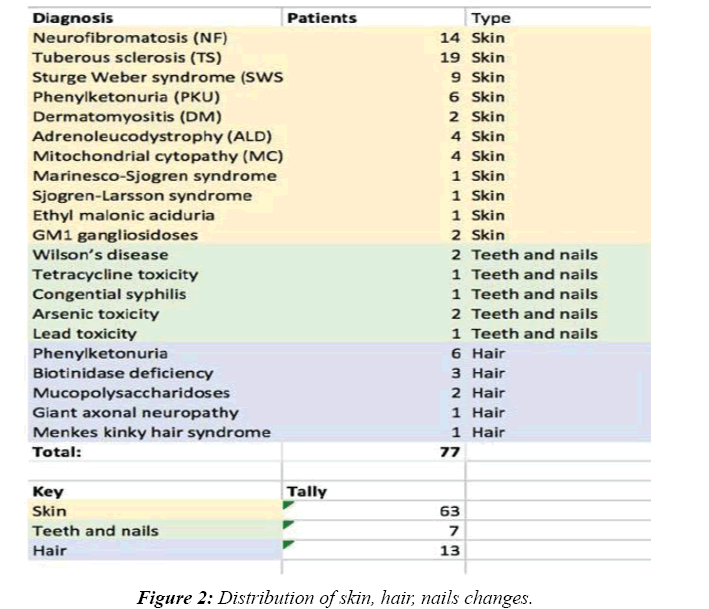 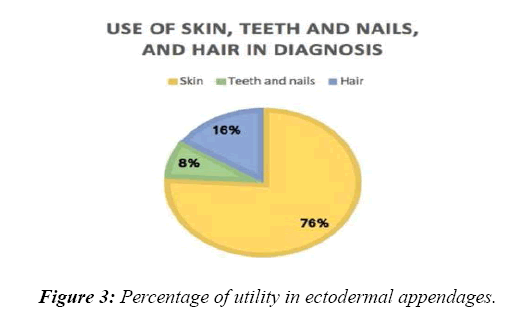 In 8.2% of children, a reasonable diagnosis could be made with clinical examination as the only tool. The neurodegenerative disorder identified most commonly is tuberous sclerosis which manifested with ash leaf macule, shagareen patch and adenoma sebaceum (Figure 4). Hypo pigmented leafy macules, epilepsy, mental subnormality, hyperactivity and cardiac rhabdomyoma can also be seen. This is due to hyperactivity of the mechanistic target of rapamycin complex 1 (mTORC1), which constitutes the molecular basis and thus, mTORC1inhibitors (Everolimus) can be tried. As it is dominantly inherited, prenatal testing should be advised for subsequent pregnancies. NF 1 and 2 and Sturge Weber syndrome are the next commonest identified conditions showing the angioma (Figure 5). Marinesco-Sjogren syndrome is caused by mutations of the SIL1 gene which has the following features: ataxia, cataracts, muscle weakness, hypergonadotrophic hypogonadism, dry skin, short stature and cerebellar atrophy [22] (Figure 6). Sjogren-Larsson syndrome patients have dry scaly skin, spasticity, retinal crystals and leukoencephalopathy [23] (Figure 7). Adrenoleukodystrophy (ALD) is an X-linked recessive disease which presents with dark pigmentation, blindness, seizures and spasticity and, sometimes, neuropathy. Imaging shows periventricular changes around the occipital horn with enhancing margins. There is mutation in the gene that makes ALDP causing abnormally high levels of Very Long Chain Fatty acids (VLCFAs) [24,25] (Figures 8-10). Mucopolysaccharidosis is a group of disorders due to defects in lysosomal enzymes involved in the breakdown of muycopolysaccharides called as glycosaminoglycans. Patients present with mental retardation, coarse skin, bushy eyebrows, flat nose, corneal clouding, visceral and skeletal changes [19] (Figure 11). Wilson’s disease is caused by abnormal deposition of copper in the liver and brain due to copper transport by the hepatic lysosomes [26]. This is an autosomal recessive disease that is easily treatable if diagnosed early. It occurs due to impaired function of P-type adenosine triphosphatase (ATPase), encoded by the ATP7B gene located on chromosome 13q14 and consisting of 21 exons. Darkening of skin, brown teeth and neurological symptoms involving cerebellum, basal ganglia as well as other parts of neuraxis at different stages is seen [27] (Figure 12). Dermatomyositis is an immunemediated disease affecting the skin and muscles (Figure 13). This is associated with Anti-Mi-2AB and shows heliotrope rash, Gottron’s papules, the V-neck sign, the shawl sign, cuticular overgrowth, and photosensitivity. Anti-transcriptional intermediary factor 1 gamma (TIF1γ)-positive patients show photoerythema, “dusky red face,” while skin ulcerations, palmar papules (inverse Gottron), diffuse hair loss, panniculitis, and oral pain and/or ulcers are sometimes associated with antimelanoma differentiation-associated gene 5 product (MDA5) antibody [28]. Patients with giant axonal neuropathy show the typical thick curled hair, neuropathy and mental retardation [29] (Figure 14). Phenyl ketonuria patients present with pale colour of skin, hair and even burnt skin appearance, in addition to mental retardation and seizures [30] (Figure 15). Biotinidase deficiency shows reduced scalp hair with hypotonia, ataxia and developmental delay, vision problems, hearing loss, skin rash and greying of hair [31] (Figures 16 & 17). Toxins like arsenic show rain drop pigmentation [32] and lead shows Mee's’ lines [33] (Figures 18 & 19). These observations are interesting as the diseases belong to a wide spectrum of conditions with unique markers, making diagnosis relatively easy. Here we have discussed a group of disorders belonging to genetic, metabolic, toxic as well as degenerative pathology involving various structures of the nervous system with unique clues pointing to specific diagnosis in derivatives of the ectoderm like skin, hair and nails which helps in focused investigation. 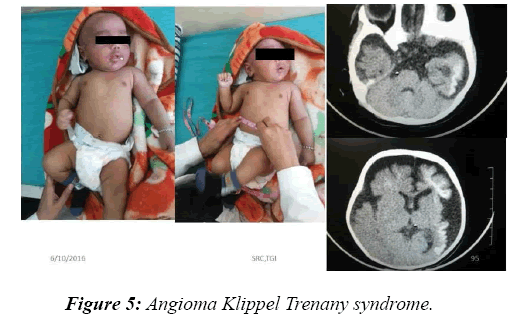 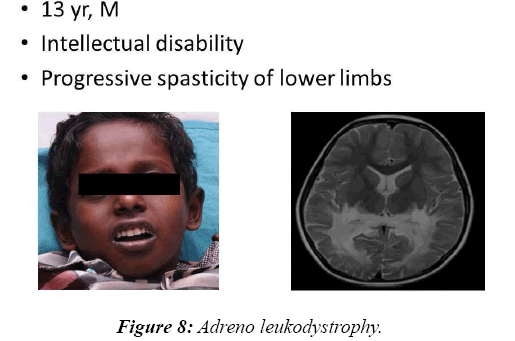 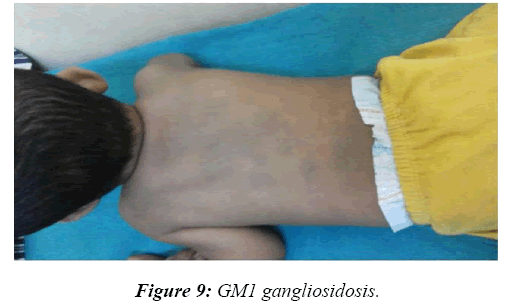 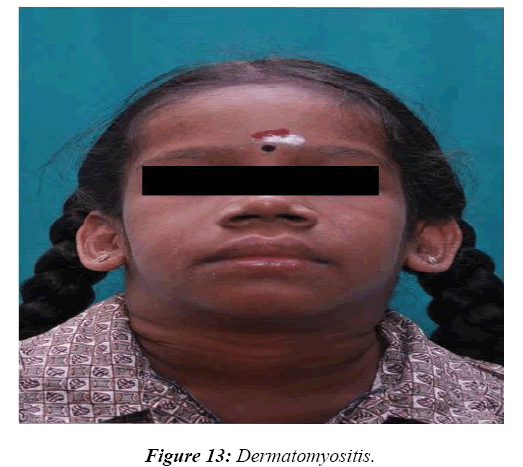 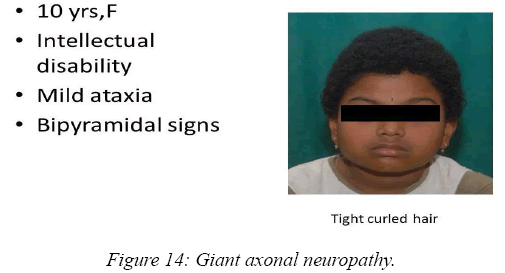 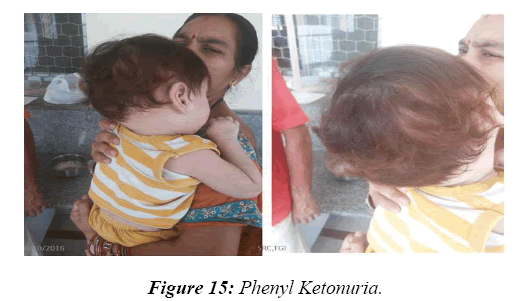 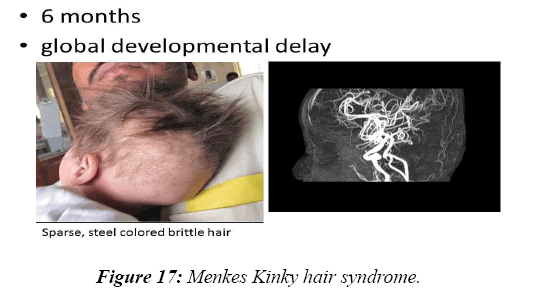 Accurate diagnosis of problems in children is very essential as they are at a stage of development and serious sequelae will result if not diagnosed and treated early. Clinical examination offers easy clues to narrow down the differential diagnosis by helping us to focus on the most important conditions. Moreover, confirmation of diagnosis is mandatory to provide prognosis to parents, as well as to advise them regarding subsequent pregnancy. In resource-constrained settings, simple bedside clues are very useful in reducing the cost of diagnostic tools.

I acknowledge with gratitude The National Institute of mental Health and Neurosciences, Bangalore and Karnataka state, South India for the encouragement