Silent sinus syndrome (SSS) or chronic maxillary atelectasis (CMA) is characterized by enophthalmos or hypo Globus along with maxillary sinus atelectasis and lateralization of the uncinate process without classic rhino sinusitis symptoms. A previous description of surgical management includes maxillary antrostomy with orbital floor repair via an implant, possibly as a two-stage procedure. The objective of this study was to evaluate single-stage endoscopic correction of SSS/CMA via endoscopic maxillary mega-antrostomy without performing planned up-front orbital correction. Eight patients (9 sinuses) in our retrospective review underwent single-stage endoscopic maxillary mega-antrostomy as first-line treatment with removal of the middle 1/3 of the inferior turbinate and medial maxillary wall due to the inferior location of the orbital floor and lateralized uncinate compared to the natural ostium. There were no complications. All sinuses remained ventilated in our study at a mean follow up of 10.3 months without the need for corrective orbital surgery. This method is a reasonable sinus ventilation and resolution of hypoglobus or enophthalmos (if present) while still safely opening the sinus.

Silent sinus syndrome (SSS) or chronic maxillary atelectasis (CMA) are terms used to describe a rare phenomenon characterized by enophthalmos or hypoglobus along with maxillary sinus atelectasis and lateralization of the uncinate process without classic rhino sinusitis symptoms. Although these terms have been described independently, others have reported SSS and CMA as being the same clinical entity. Its origins are debated but may occur because of chronic maxillary sinus hypoventilation leading to maxillary sinus collapse and eventual alteration of normal orbital floor architecture [1]. Previous descriptions of surgical management include endoscopic maxillary antrostomy with orbital floor repair via an implant, as a one or twostage procedure [2]. However, more recent reports describe a single-staged procedure without repair of the orbital floor as some cases present early before development of clinical orbital findings yet still have radiographical findings of lateralized uncinate processes and increased orbital volumes [3].

The objective of this study was to evaluate singlestage endoscopic correction of SSS/CMA via endoscopic maxillary mega-antrostomy without performing planned up-front orbital correction. This was hypothesized to be the safest method for patients undergoing maxillary antrostomy due to the lateralization of the uncinate and the inferior location of the orbital floor associated with hypoglobus.

A retrospective review of patients treated by the senior author at a tertiary care institution over a 24-month period from 2013-2014 for disease processes consistent with SSS/CMA was conducted. All patients underwent preoperative workup to include sinonasal endoscopy and computed tomography (CT). The Institutional Review Board at the University of Florida granted approval. Inclusion criteria were classic findings of SSS/CMA such as sinus opacification with contracture of the maxillary sinus, clinical or subclinical hypoglobus and/or enophthalmos and/or midfacial deformity, uncinate lateralization, and absence of classic symptoms of chronic rhino sinusitis (CRS). Exclusion criteria included symptoms consistent with a diagnosis of CRS, tumours, history of orbital/facial trauma, or history of congenital anatomic deformity of the orbit/ midface. The degree of hypoglobus was measured as the relative position of orbital floor retraction into the atelectatic maxillary sinus compared to the contralateral side. Therefore, the degree of hypoglobus could not be measured for patient number one with bilateral SSS seen in (Table 1). Due to the patient presenting with bilateral SSS, there was not a CT available before the patient developed SSS to compare with the pre-operative CT.

All SSS patients in the above 24-month period underwent single-stage endoscopic maxillary megaantrostomy. The antrostomy approach began with removal of the middle 1/3 of the inferior turbinate and medial maxillary wall due to the inferior location of the orbital floor compared to the natural ostium. Removal continued from a location posterior to the lacrimal duct inferior to the natural ostium to nearly the crista ethmoidalis in continuity with the posterior maxillary wall. Once the maxillary sinus was safely entered and the orbital floor was identified, backbiting instruments were used to safely remove the uncinate process in a retrograde fashion. The primary outcome on follow-up postoperatively was sinus ventilation on endoscopic examination. Secondary outcome was patient desire for subsequent orbital surgery for correction of residual enophthalmos.

Eight patients were identified and one patient had bilateral SSS/CMA. All nine sinuses remained well ventilated with widely patent maxillary antrostomies at a mean follow-up of 10.3 months without need for corrective orbital floor surgery. Clinical characteristics for each patient are noted in (Table 1). Facial pain and enophthalmos was the presenting complaint (reason for imaging) in 50% (4/8) and 38% (3/8) of our patients, respectively. Whether the facial pain was related to the atelectatic maxillary sinuses is unclear. Patient number six had SSS/CMA incidentally found on CT. No complications such as orbital entry, orbital hematoma, vision changes, lacrimal injury, or epiphora occurred. As shown by our study and others, early SSS may not present with clinical enophthalmos/hypoglobus or vision changes4. Subclinical hypoglobus, however, could be measured in all of these patients as seen in (Table 1). Figure 1 contains some representative preoperative CT scans of the first four patients. 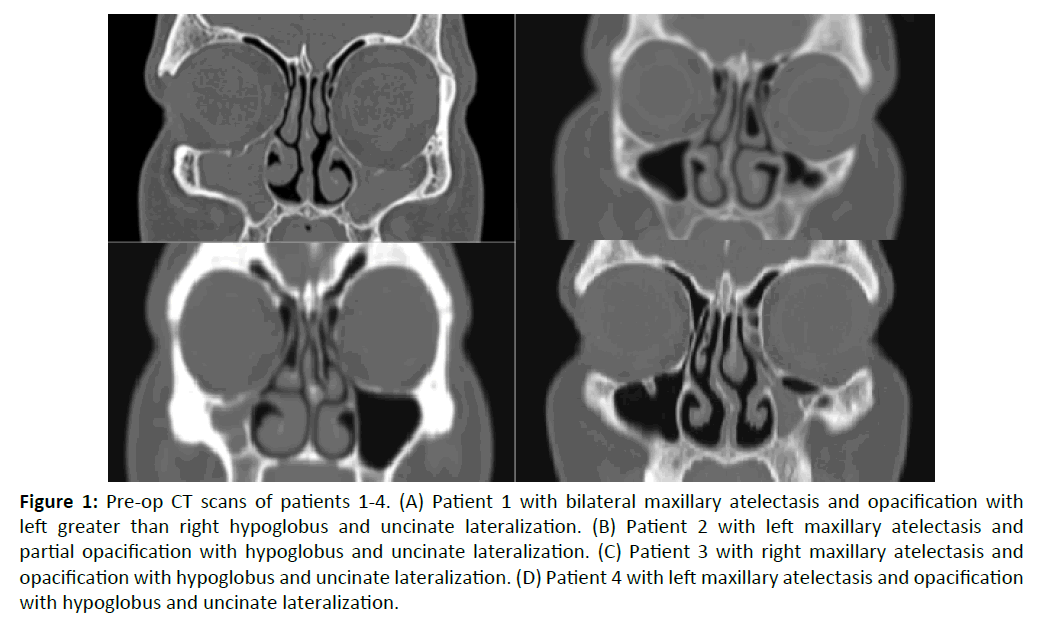 This is the only series of SSS or CMA with reported endoscopic maxillary mega-antrostomy treatment. The single-staged procedure of maxillary antrostomy offered initially for SSS/CMA has been demonstrated by other studies showing that the orbit and maxillary sinus have capabilities of partially restoring their natural volumes after ventilation of the maxillary sinus [2,4,5]. In this way, second-staged orbital surgery could be offered later if orbital symptoms do not resolve. Orbital floor augmentation has its own inherent risks and possible complications. Diplopia is uncommon on presentation for SSS patients. Therefore, orbital floor repair can be complicated by iatrogenic diplopia, orbital hematoma, failed correction of the enophthalmos or hypoglobus, and in rare cases cause infection or blindness [2].

Due to lateralization of the uncinate process and bowing of the orbital floor in the form of hypoglobus that was seen in each of our patients with maxillary atelectasis, traditional endoscopic uncinectomy could increase the risk of orbital injury. A literature review conducted for the hypothetical window of standard maxillary antrostomy as measured between the medial orbital wall and the superior edge of the inferior turbinate demonstrated no published data from our review. As seen in (Figure 1), orbital contents of these patients are in close relation to the ostiomeatal complex (OMC). Therefore, in most of our patients, anterograde uncinectomy was contraindicated due to the low position of the orbit and the uncinate abutting against the orbit. For this reason, the maxillary mega-antrostomy with initial removal of the middle 1/3 of the inferior turbinate and drilling of the medial maxillary wall with low entry into the maxillary sinus was the safest method to enter the maxillary sinus. Also, ample space in the OMC must be obtained to ensure proper pressure equalization and aeration of the maxillary sinus in the event of scar contracture. While performing routine antrostomy would be sufficient to drain the sinus, the narrow antrostomy may put the patient at risk for stenosis. The minimal added risk of the maxillary mega-antrostomy seems to be justified so that stenosis is nearly impossible post operatively. In order to decrease the likelihood of reoperation, the maxillary mega-antrostomy appears to be an effective initial treatment. However, further study of this technique with extended follow-up is required to determine whether it has widespread application in the initial surgical treatment of SSS/CMA. Other limitations to this study include its retrospective nature, lack of Hertel exophthalmometry and that post-operative imaging was not performed because all sinuses showed wide patency on endoscopy.

Therefore objective radiographic measurements of the orbital floor post-operatively are not available.

In conclusion, this is the only series of SSS/CMA to date with reported endoscopic maxillary megaantrostomy treatment as an initial single-stage treatment. Endoscopic mega-antrostomy alone appears to be a practical initial treatment option for SSS/CMA by providing sufficient sinus ventilation while still safely opening the maxillary sinus in near proximity to the orbit.