Background: Conventional Laparoscopic Appendectomy (CLA) is a minimum invasive operation for appendicitis patients. Single Incision Laparoscopic Appendectomy (SILA) is an operation with increasing interest to the surgeons because of the better cosmetic outcome. Using conventional instruments rather than special instruments to operate SILA can reduce treatment cost. SILA is more difficult than CLA to be performed due to the loss of triangulation and poor vision. Up to now few studies have been reported on how to overcome the operation difficulty of SILA.

Patients and Methods: A total of 107 patients with appendicitis from February 2013 to January 2015 were enrolled in this study. All patients were randomly assigned to two groups: SILA and CLA. The characteristics and perioperative outcomes were analysed.

Conclusions: SILA is a feasible and safe alternative to CLA for uncomplicated appendicitis patients. The operative difficulty can be reduced by usage of cross-operation technique.

At present, the surgery has evolved towards using less invasive techniques. Conventional Laparoscopic Appendectomy (CLA) is a minimum invasive operation for appendicitis patients. Single Incision Laparoscopic Appendectomy (SILA) is an operation with increasing interest to the surgeons because SILA has been associated with improved cosmetic benefits and decreased postoperative pain [1,2]. Using conventional instruments rather than special instruments to operate SILA can reduce treatment cost. SILA is more difficult than CLA to be performed due to the loss of triangulation and poor vision. It has been performed less in inferior hospital due to more expensive instruments and higher operative difficulty. Up to now few studies have been reported on how to overcome the operation difficulty of SILA. In this study, we performed SILA by using conventional instruments to reduce the cost, and using cross-operation technique to reduce operative difficulty.

A prospective randomized controlled trial was conducted for acute appendicitis patients in the Affiliated Hospital of Putian University from February 2013 to January 2015. The excluded criteria were as follows: (1) the course of disease was more than 48 hours; (2) the BMI of patient was more than 30 Kg/m2; (3) patients who also suffered severe diabetes; (4) those who had a story of previous abdominal operation; (5) pregnant patients; (6) those who disagreed with random selection of operation styles. A total of 107 acute appendicitis patients were recruited and randomly assigned into two groups: SILA and CLA. Informed consent was obtained from each of the patients before operation and the study was approved by Ethics Committee of Putian University. All operations were performed by the same surgeon and assistant who had finished more than 50 CLA and 20 SILA.

Every patient was operated under general anesthesia. Morphine dose received was similar in both groups. All operations were performed using the same laparoscopic system (Stroz, Germany). 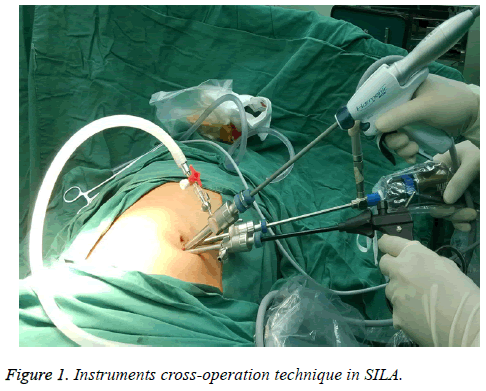 An incision about 10 mm was made above the umbilical ring. Pneumoperitoneum was created with an intra-abdominal pressure of 13 mmHg by a vertical needle. After inserting a 10 mm troca, the peritoneal cavity was examined by using a 30 degree laparoscope. Two incisions about 5 mm were made at left lower belly and right lower belly, and two 5 mm trocas inserted respectively. The details of the appendectomy were similar to those of SILA.

All patients received the same perioperative antibiotics. After surgery, each patient accepted six hours of oxygen inhalation. Liquid diet was started six hours later, and semi-liquid diet usually was given next day.

The characteristics and outcomes data of all patients were collected. The data were analysed by using SPSS version 17.0 (SPSS Inc. Chicago, USA). Continuous variables were compared using student t-test, while discrete variables were analysed with the chi-square test. P<0.05 was considered statistically significant.

Table 1. The characteristics of patients. 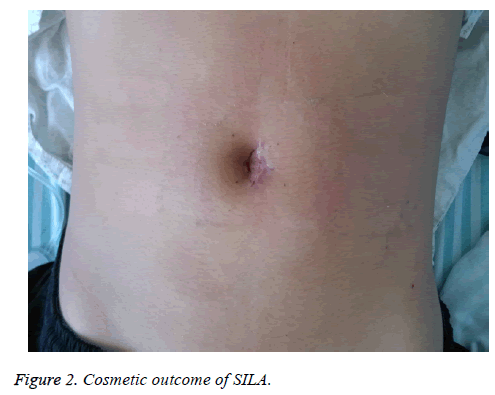 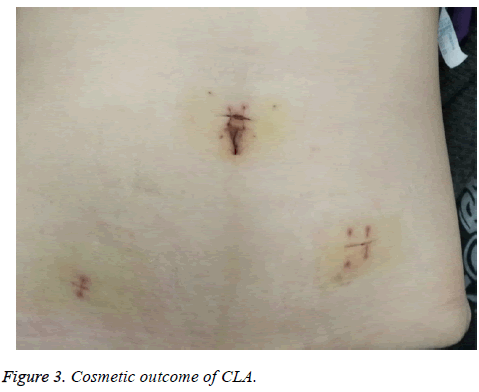 Laparoscopic appendectomy has been widely performed in most hospitals. The advantages of laparoscopic appendectomy compared with open appendectomy are minimally invasive trauma, less postoperative pain, and better cosmesis [3,4]. SILA is a new minimally invasive operation that uses a single incision to minimize all ports to one site, and this incision can be strategically placed in the umbilicus for a hidden scarless abdomen wall [5]. Since the first report of SILA in 1992 [6], more surgeons attempt to perform this cosmetic procedure. However, it is more difficult to perform SILA than CLA, because all instruments are inserted through the same incision, leading to insufficient triangulation of traction [7-10]. To reduce the difficulty, most surgeons perform SILA by using a special multichannel single-port device, usually this device is more expensive. In order to reduce treatment cost, a few doctors perform SILA using conventional instruments, but it is more difficult. Here we describe our own simplified technique for single incision transumbilical laparoscopic appendectomy. The advantages of our method are as follows: first, using crossoperation technique at vertical plane can relieve operative interference and improve vision in surgical site; second, we do the incision beside the umbilicus, which can avoid gas leakage because of thicker abdominal wall at this site than at umbilical center.

No serious complications occurred after operation in all patients within one to three years of follow-up. Our results showed that both SILA and CLA could be successfully performed by trained surgeons. The two procedures did not differ in terms of postoperative pain, the length of hospital stay, and postoperative complications in agreement with the conclusions of previous studies [11-13]. At the beginning of our SILA procedure, we evaluated the disease by examining abdominal cavity using a 5 mm 30 degree laparoscope, and converted to open procedure or CLA procedure in case of complicated appendicitis. In our trial, three cases of SILA group required additional troca placement to complete the operation because of the serious abdominal adhesion, such adhesion may due to previous intra-abdominal infection.

In conclusion, SILA using conventional instruments is technically feasible and safe in uncomplicated appendicitis case, and achieves better aesthetic outcome in the umbilicus ring compared to CLA. Because of using the same instruments, the cost of SILA is no more than that of CLA. Therefore, SILA is an alternative procedure. However, our study has several limitations such as small sample size and single center location. Future multi-center trials with larger numbers of patients will be necessary to confirm our conclusion.