Tobacco use is an important factor in many chronic diseases including cancer, lung disease, and cardiovascular disease, despite the numerous regulations that restrict its use worldwide [1]. Many carcinogenic materials, including the toxic elements found in tobacco and tobacco products [2], reach the bloodstream by smoking and accumulate in different organs [3]. Smoking is an important source of exposure to toxic elements, which can cause physiological disorders [4-6]. Permanent exposure to toxic elements can cause many diseases. For example, Cadmium (Cd) causes kidney failure [7], Lead (Pb) causes problems in the heart, blood vessels, and nerves [8], and Nickel (Ni) causes cardiovascular and kidney diseases [9]. Ni forms carcinogenic compounds [2] by reacting with carbon monoxide that is produced from tobacco smoking. According to the Agency for Toxic Substances and Disease Registry (ATSDR) [10], Cd, Chromium (Cr), Mercury (Hg), and Pb are among the top 10 toxic metals in the priority list of hazardous substances. Zinc (Zn) is a key element within the human body and an essential cofactor for various enzymes [11]. Zn deficiency is associated with increased Cd, as a result of the hostile relationship between Zn and Cd [12].

Many studies have estimated the concentrations of heavy metals and toxic elements, and the relationship between the presence of these elements and smoking habits, to clarify whether smoking is a source of these metals. Previously, in a study by Hussain et al. [13], the concentration of heavy metals in the nails of smokers was compared with those in nails of non-smokers by using atomic absorption spectrometry.

In Maiduguri, Nigeria, a study was conducted to determine the concentrations of Iron (Fe), Cr, Arsenic (As), Cd, Ni, and Pb using atomic absorption spectrophotometry [14]. The hair and nail samples of workers employed in wineries and in metal workshops were collected. They found that the concentrations of Cd, Pb, Cr, Fe, Ni, Copper (Cu), and Zn were higher in the samples from smokers compared with non-smokers.

Another study was conducted in Pakistan for the determination of Copper (Cu), Cd, and Pb in the hair and nail samples of workers from various industrial environments as well as smokers were estimated using a flame atomic absorption technique [15]. High concentrations of these metals were found in both groups. Similarly study by Bruno et al. [16] used inductively coupled plasma mass spectrometry (ICP/MS) for the simultaneous determination of Cd, Cu, Mn, Ni, Pb, and Zn in nail samples and compared the results with electro-thermal atomic absorption spectrometry technique.

The detection of toxic metals in biological samples for human clinical examination is important which use as a marker for many diseases [4-9]. The present study aims to estimate the level of toxic elements in nail the samples of smokers to study the relationship between human habits, such as smoking, as well as the smoking period, and the presence of toxic elements in the human body.

Nail samples are advantageous over other biological samples, because elements accumulate over a long period of time without any changes. Nail samples do not require any special conditions for storage, and the analysis can be done safely without any loss of these elements. In addition, the collection of the samples is very easy [17,18].

The aim of the present work was to develop a sensitive method for determination of some heavy metals in nails of smokers and non-smokers in Saudi Arabia population using inductive coupled plasma mass spectrometry.

Nails were collected from volunteers who smoked cigarettes or tobacco pipes or were non-smokers (control) over the course of one year (January 2014 to January 2015). The study was conducted in accordance with the Declaration of Helsinki and approved by the Research Ethics Committee of King Saud University, Riyadh, Saudi Arabia [16]. The samples were classified according the smoking period, and individually stored in plastic bags with custom date entries. Each sample bag was labeled accordingly: sample number, age, and period of smoking.). Samples were collected from volunteers who smoked cigarettes (n=30), tobacco pipes (n=30), and nonsmokers (n=15).

Two working solutions (100 and 10 μg/ml) of each element (Ni, Cr, Zn, Cd, Pb, Hg and Rh) were prepared by suitable dilution of each standard with de-ionized water.

The sample was digested via acid digestion (mixture of concentrated nitric acid and perchloric acid) in a microwave. The nail samples were washed with a mixture of Triton X-100 and acetone according to the method described by Gammelgaard et al. [19], before digestion. After the drying process, nail samples were weighed and (0.5 g) placed in Teflon containers to be microwaved, and then 10 ml of a mixture containing concentrated nitric acid and perchloric acid (1:6) was added. The microwave operation was modified as per a report by the US Environmental Protection Organization (USEPA) [20]. The solution was then transferred to a 50 ml measuring flask and completed to the mark with deionized water, and an aliquot was inserted into the cell for measurement using ICP/MS. A blank sample, which underwent the same conditions, containing 0.5 ml of deionized water was also used.

Validation of the proposed method

The suggested method was validated using certified reference material (KATS No. 2008-242) [21] containing fixed concentrations of the metal ions. The validation parameters included linearity, sensitivity, selectivity, precision, and accuracy. ICP/MS, after microwave acid digestion, was conducted for the simultaneous determination of toxic elements (Ni, Cr, Zn, Cd, Pb, and Hg) in the nail samples. The procedure was optimized to ensure linearity, accuracy, and precision. Calibration curves were in the concentration range of 10-100 μg/l for Ni, Cr, Zn, Cd and Pb, while Hg was in the range of 100-300 μg/l and Rh was used as the internal standard.

The volunteers were divided into three groups: cigarette smokers, tobacco pipe smokers, and non-smokers (control). Results are presented as mean ± Standard Deviation (SD). Data were analysed using a one-way analysis of variance by using Microsoft excel Window 2010 and the Statistical Package for the Social Analysis (SPSS; version 16) using parametric study . Values<0.05 were considered statistically significant. The concentrations of six elements (Ni, Cr, Zn, Pb, Cd, and Hg) were analysed and the group type (cigarette, tobacco pipe, and control) was used as the independent variable. The average concentration and smoking period were also examined [22]. 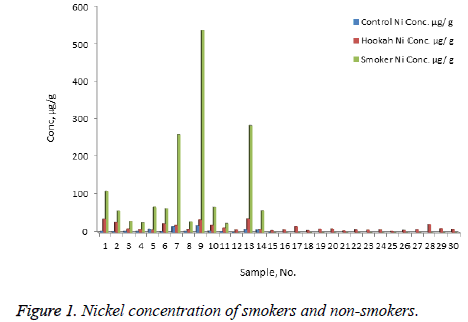 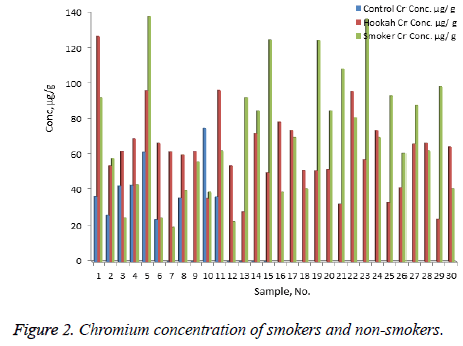 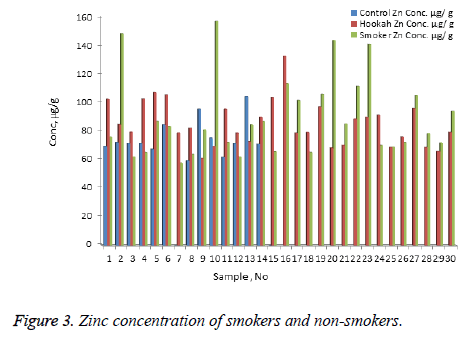 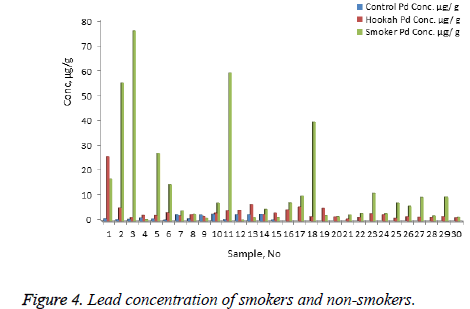 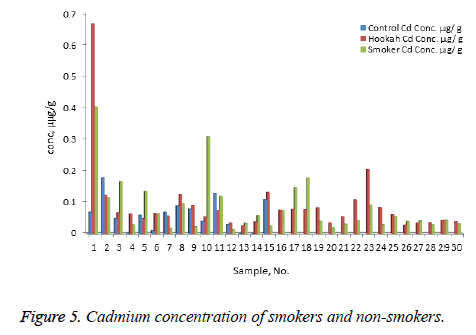 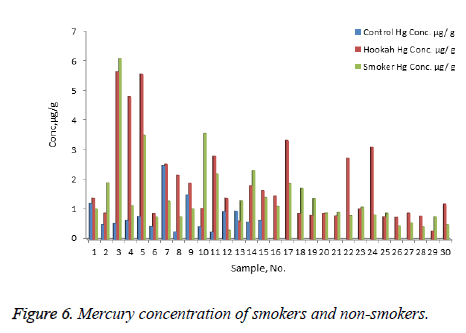 Smoking is one of the main sources of exposure to toxic elements, which can cause many diseases [7-9].

The present study ICP/MS was used to determine the concentration of toxic metals in the nail samples of cigarette smokers, tobacco pipe smokers and no-smokers. The levels of the investigated elements in the nails of smokers were high compared with those in non-smokers, and this was statistically significant, with regard to the smoking habit, for Pb, Cr, Ni, Zn, and Hg but not for Cd. For the smoking period, the levels of Cr and Pb were significantly different but the levels of Ni, Zn, Cd, or Hg were not. This study shows that the presence of toxic metals in biological sample (nail) are consider as marker for many diseases.

The author extend their appreciation to the Research Center of the college of pharmacy, King Saud university, and the Dean of Scientific Research at King Saud University for funding this work.