Biological intelligence algorithms use biological terms and features such as DNA helix models, immune system algorithms, genetic algorithms etc., to elucidate the computational methods. These biologically inspired algorithms defines that all techniques are based on the existing law of nature. The distributed network database has the characteristics of data, work processing, and distribution and so on. When the data is added, the large-scale data can be carried out simultaneously. In this paper, a simple understanding of the distributed network database was obtained on the basis of the selection of ecological intelligent algorithm and ant colony algorithm. The method was obtained according to the information flow of the existing mathematical models and simulation experiments, which was the method with high accuracy.

Computational thinking has revolutionized the field of medicine and biology in various terms. The convergence of biology and computer science has inspired scientists from both fields in solving different concerns. The algorithms have been designed to understand processes at molecular and cellular levels. The era of predictive and personalized medicine is about to lead revolutions in health care industry [1]. 21st century of research in biology is mainly focusing on system biology, which helps to analyze the bulk of biological information using computational tools. Database has been developed for decades [2]. Database is the core technology of information technology, which has been widely used in various industries [3]. Accuracy requirements for information flow acquisition methods are particularly accurate. Complex biological systems and their components are related with the computational algorithms in various ways such as cell cycle is compared with Approximate Majority (AM) algorithm [4], genetic algorithms and evolution Strategies are used in artificial intelligence techniques [5], etc.

Distributed network database is a set of logical data sets of the same system. It is distributed in a number of areas connected by computer networks, and it can get the unified management by a distributed database management system. For the distributed network and database, in order to improve the search speed, the data is scattered in different regions of the different nodes, and the same data is stored in different regions of the nodes, which means that there is a number of sub data. At the same time, the processing of the distributed network data is the distribution of works, which is named the unified working process, and the executions are divided into a plurality of areas in the work, so as to perform more than one node, and it also increases the actual execution and ability to improve the use rate of the resource database. In the data processing and distribution work, the total-work processing and sub-work processing control multiple problems of users at the same time, and a number of deputy secretaries of different regions of the nodes on the data will be read which is caused by the inconsistent data. Because of the unpredictable operations and faults caused by the duplication of work processing, there is the inconsistent data. In order to ensure the consistency of the database data and the secondary data, it is necessary to adopt the method of obtaining high accuracy information flow. In this paper, based on the method of ecological intelligence, a model was established to obtain the information in the distributed network data.

In order to test the correctness of the model, this paper simulates the urban land construction in a certain area of Shanghai by computer simulation. We assume that within 48 h, there is 10 million new data in the distributed network database of land constructions of Shanghai. Then, we use the traditional work processing method, the extended work processing method, the simultaneous copy control method, the fault time copy control method and the information team method to increase the data. The results are shown in Figure 1. 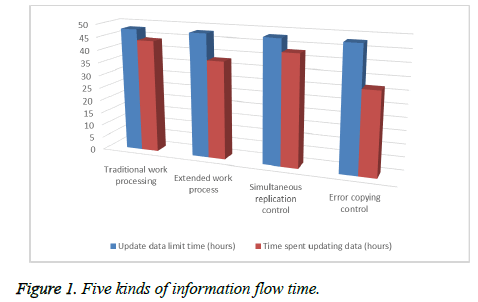 With the development of the computer technology and the wide use of the Internet in various fields, in order to adapt to the development of the times, the distributed network database is also widely used in various fields, which are relied on by people. The database technology has high updating speed on data and the large-scale data processing at the same time, and the total data and the sub data can meet the requirement of consistency, which shows that the accuracy method on obtaining information flows is an important basis for the distributed database. In this paper, a simple understanding of the distributed network database was obtained, and based on the selection of ecological intelligent algorithm and ant colony algorithm; the method was obtained according to the information flow of the existing mathematical models and simulation experiments, which was the method with high accuracy. In this paper, there were some limitations in the understanding of the information acquisition methods in the distributed network database and the establishment of the model. We hoped to provide some helps for the further study of the later researchers.