An attempt was made to speciate and antimicrobialy differentiate 150 clinically significant isolates of CoNS by practical scheme adapted from various references. Total 150 isolates were collected from NICU, Pediatrics Department, CSMMU, Lucknow from different sites and subjected to antimicrobial screening and biochemical characteriza-tion using conventional microbiological methods. Antibiotic sensitivity test was performed for all clinically significant isolates. 90% isolates were conveniently identified. S.epidermidis (40%), S.saprophyticus (14%), S.haemolyticus (12%), S.hominis (6%), S.lugdunensis (6%), S.schleiferi (2%), S.capitis (4%), S.warneri (6%), 15 isolates were not identified to the species level. Antibiotic susceptibility testing showed maximum resistance to ampicillin and penicillin with 80% and 38% strains showed the resistance to oxacillin. The increasing recognition of pathogen potential CoNS and emergence of drug resistance among them demonstrates the need to adopt simple laboratory procedure to identify and de-termine the prevalence and antibiotic sensitivity of CoNS. It will help in treating clinicians for first line treatment in hospital.

Co-agulase negative staphylococci have become common cause of nosocomial infections, particularly blood stream infection [1] and infections related to prosthesis [2]. They account for 9% of nosocomial infection [3]. The natural habitats of staphylococcus epidermidis and several other species of CoNS include skin and nares [4]; a clinical specimen could therefore, contain both contaminants and pathogens of these species. If contaminant is mistakenly identified as a pathogen i.e. source of isolate was the skin and not an infective process, the patient will probably receive unneeded antimicrobial therapy. It is now possible to identify the different species of staphylococcus by methods practical for diagnostic laboratories. Because of this more laboratories can access what potential clinical or epidemiological benefits this addition information might have.

The present study was aimed to identify the most preva-lent clinical isolates of CoNS by minimum number of tests necessary and sufficiently to discriminate between species. The tests, which were simple, inexpensive and easy to perform, were selected from the scheme of Kloos and Shleifer to identify CoNS species group (group ap-proach) or species [5,6]. Further one or two additional test was included to complete the strain identification wher-ever necessary. Antimicrobial susceptibility profiles of all isolates were done by Disk Diffusion Method.

A total of 150 consecutive non-repeat clinically signifi-cant CoNS isolates were collected from January 2006 to December 2006 from Pediatrics Department and processed in the Department of Microbiology, Chhatrapati Shahuji Maharaj Medical University, Lucknow. Strains were isolated from blood sample, pus, urinary catheter tip and urine. The isolates were considered clinically signifi-cant when isolated in pure culture from infected site. The strains collected were initially identified by colony mor-phology, Gram staining, catalase, slide and tube coagu-lase (read after 4-24 hr) and anaerobic acid from manni-tol. Bacitracin (0.04U) susceptibility was done to exclude micrococcus and stomatococcus spp [5,7].

Acidometric determination of β Lactamase production was performed by using growth from around the oxacillin disk.

Seventy two out of 150 strains of CoNS (60%) were iso-lated from blood samples, 36 from pus samples, 15 from urinary catheter tip and 12 from the urine samples. All 150 strains were negative for blood clumping factor and tube coagulase negative. Table 3 shows the CoNS species group /species by the scheme [15]. 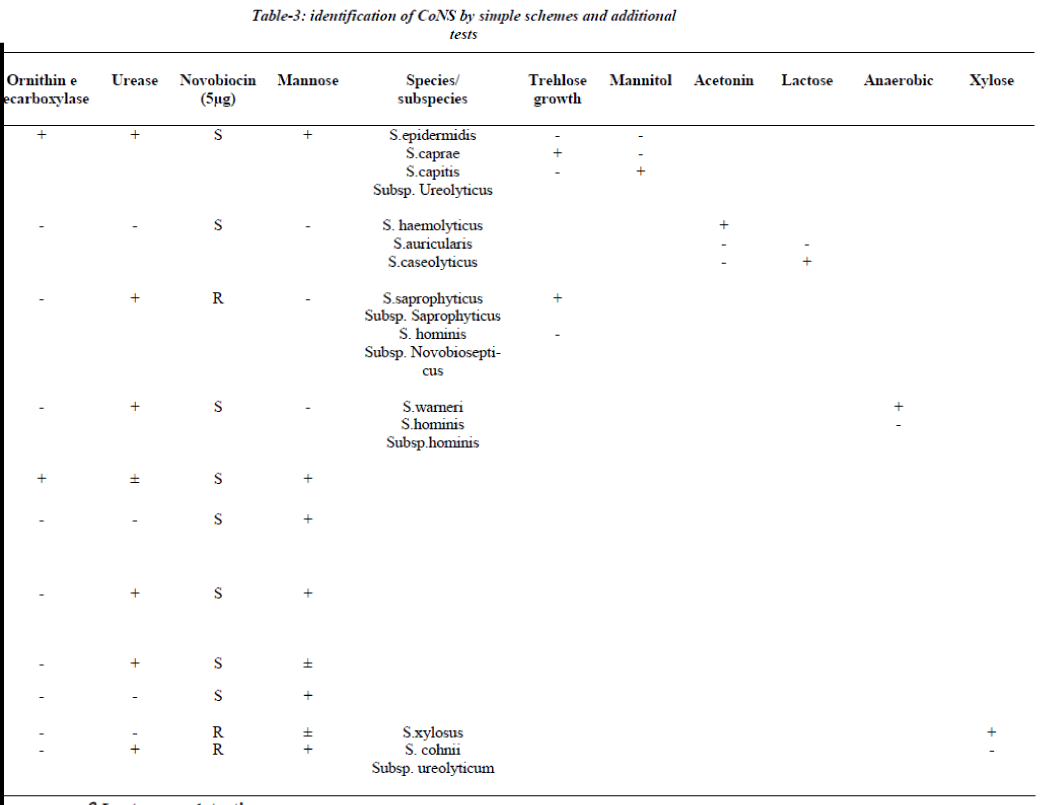 Table 3: identification of CoNS by simple schemes and additional tests

The scheme could identify 90% of CoNS isolated from clinical samples incorporation of one or two additional test whenever needed. S. epidermidis was the most fre-quent isolate and was identified if ornithine decarboxylase was positive (60 isolates), while ornithine decarboxylase negative isolates required inclusion of trehlose and mannitol for speciation. 15 isolates were unidentified because of aberrant characteristics.

Many laboratories do not identify clinical isolates of CoNS to the species level as they are considered normal inhibitant of skin and nares capable of causing only op-portunistic infections [9]. Moreover, the conventional identification methods, though accurate, are cumbersome and employ a large battery of biochemical reactions, which often gives variable results and all the tests are generally not available in most of the routine diagnostic laboratories [16]. As CoNS is increasingly being impli-cated as significant nosocomial pathogen, several review-ers have emphasized the need for species identification, which is possible only by simple, easily adaptable, inex-pensive method [3,5,6,15,18,19]. The species identifica-tion is important in monitoring the reservoir and distribu-tion of CoNS involved in nosocomial infections and de-termining the etiological agent [5,15]. The present scheme conveniently identified the most frequently encountered clinical isolates in our hospital as S.epidermidis (40%), S.haemolyticus (12%), S. saprophyticus (14%), S. hominis (6%), S.lugdunensis (6%) upto species level by incorpora-tion of one or two additional tests. This scheme could directly identify even the newly described species S.schleiferi subsp. Schleiferi and S. lugdunensis using slide agglutination test for detection of clumping factor or fibrinogen affinity factor provided no slide is discarded before 10 seconds as S.lugdunensis sometimes gives de-layed results [5]. Consequently, the laboratories perform-ing only slide agglutination test without tube coagulase test may misidentify S.schleiferi subsp. Schleiferi and S. lugdunensis as S.aureus. This scheme could not differen-tiate S.capitis subsp. Ureolyticus, S.warneri, S.simulans as pyroglutamyle β napthylamide (PYR) hydrolysis test, a key component for their identification, being expensive was not included. Various workers from India have re-ported S.epidermidis and S.saprophyticus to be the most common isolate similar to our study [9,10,17,18]. Though a single report has mentioned isolation of S.cohnii which was not isolated in our study, however, the scheme described can identify this isolate [9].

This scheme identified 90% of CoNS upto the species level which is almost similar to earlier report [9,10,17-19]. The most obvious finding was observed in smaller numbers by others [21]. Out of all species S. haemolyticus has the most antibiotic resistant profile. Ap-proximately 76% of our isolates of S. haemolyticus showed resistance to oxacillin (76%), gentamycin (76%), erythromycin (80%). Although, S.epidermidis can also show significant multiple resistance patterns. It is there-fore recommended to assess the importance of CoNS speciate whatever level possible and perform the antibi-otic susceptibility testing before any typing procedure for epidemiological studies are being undertaken. This simple, inexpensive methodology will prove useful in routine microbiology laboratory for the presumptive identification of CoNS.