Silicon based bio-filter for bio-molecule separation

Bio-filter is designed to segregate body fluids into its constituent components like WBC, RBC, platelets from the whole blood using single drop sample of fluid. In this proposed work, separation of biomolecules WBC, RBC and Platelets is possible using passive method based cross flow filtration technique, which is more effective than conventional methods. Separation of biomolecules that are smaller than the microfluidic filter gap size is demonstrated through the sieving medium to filter various sizes of biomolecules with a pre-determined shape and size of microchannel. Filter structure is simple and fluid flow can be achieved without any external force such as electric field, magnetic field, acoustic force, etc. as used in active method. Si material is chosen because of its high biocompatibility. Design is simulated by using COMSOL Multiphysics software. The designed filter can be used for point of care diagnostics and to culture cells.

Micro Electro Mechanical System (MEMS) is emerging to cater the development of miniaturized devices. MEMS proved to be a revolutionary technology in various domains such as sensors, actuators, fluidics, acoustics, RF MEMS, Optical MEMS, etc. Microfluidics deals with the manipulation and analysis of minute volume of blood [1-3]. MEMS have many applications in microfluidics with building blocks such as flow channels, pumps, needles, mixers, valves, filters, reservoirs and dispensers. Various diseases and malfunctions in human body can be detected by analysing the different components of the blood [4]. Bio-molecule separation is the challenging task.

Passive devices utilize the distinct physical properties of the particle such as size, density and cell deformability [15]. These methods have the simple design and fabrication and relatively high throughput with less input volume. Different methods of designing passive devices are cross-flow filtration [16-19], deterministic lateral displacement [20], centrifugation separation [21], etc. Jafar et al. [22] designed the microfluidic device with pillars placed in the straight rectangular channel for separation of human blood's WBC based on their size. The pillars are grown with space 6 μm. Since it is a dead-end filter, the larger molecules will get blocked at the pillar. To avoid the clogging problem, Yousang et al. developed the μ-sieving technique [5]. In this technique, piezoelectric actuator induces oscillatory vibration in the channel. But it is complicated due to actuator since it need external field.

For biomedical applications, crossflow filtration technique is employed which does not involve any external device to induce the flow of particles. The principle behind the cross-flow filter is that the blood is forced to flow through microfluidic channel parallel to the surface membrane rather than into the filter as in the dead-end filtration. This results in better efficiency. Daniel et al. and Xing et al. have extracted the DNA after cell lysis by using the cross-flow filtration [23,24]. Xing et al. have separated the WBC, RBC and platelets with a tortuous channel which is made of PDMS [23,25]. But some particles are adsorbed on the surface of PDMS which leads to poor efficiency.

In this work, cross flow filtration with Meander shaped microfluidic filter is designed for effective filtration of bio-molecules. Bio-molecules may escape without entering the pores in case of straight microfluidic channel. But in this work, microchannel is designed with bends; the velocity of fluid is decreased at each bend thus controlling the flow rate. Pores are created at each bend of microfluidic channel to increase the filtering efficiency. Silicon material is used in our work and the structure is simulated using COMSOL Multiphysics software.

The designed microfluidic chip has 3 plates. They are Cover plate, sieving plate and collecting plate as shown in Figure 1. 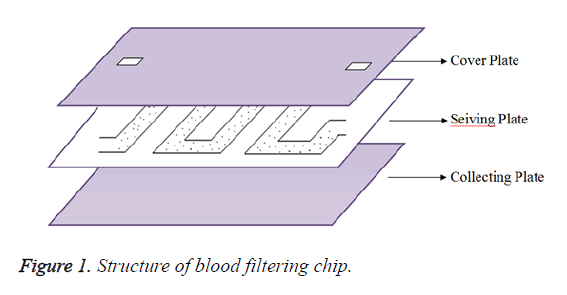 Cover plate has inlet and outlet for fluid flow. Filter is designed in Sieving plate and collecting plate will store the filtered bio-molecules.

Meander shaped microchannel with pores is created in the sieving plate to filter the bio-molecules, whose profiles decide the separation efficiency of the blood. Meander shape is shown in Figure 2. The geometrical parameter of designed microchannel is given in Table 1. Silicon material is used for effective filtering of molecules. Pores in the silicon are made possible by Porous silicon formation technique using Electrochemical etching process.

COMSOL Multiphysics software is used for simulating and analysing the different meander structures. Laminar flow and particle tracing module is used to track the flow and particle behavior through the microchannel. Silicon material is used as it has more biocompatible properties. Properties of Silicon are given in the Table 2. The blood is chosen as a sample. Important properties of blood are: Density is 1025 Kg/m3 and Dynamic viscosity is 3.5 × 10-4 PaS. 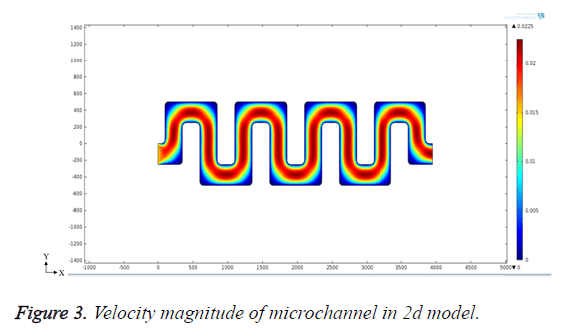 From the simulation results, it is clear that the velocity of fluid in the channel at each bend is low when compared to the straight microfluidic channel. So, pores are created at each bend for filtering bio-molecules.

Pores of different size, 4 μm for platelets, 8 μm for RBC and 12 μm for WBC, is created at the bends of the micro channel. Symmetric meander microchannel with three pores at the bends is shown in Figure 4. 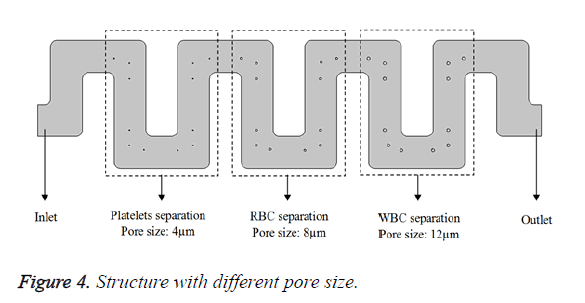 The channel with pores is designed and simulated in COMSOL. The laminar flow module is used to analyse the flow behavior and its flow velocity across the channel. Simulation results for velocity profile in the microfluidic channel are shown in Figure 5. The blood flow across the microchannel is shown in Figure 6. 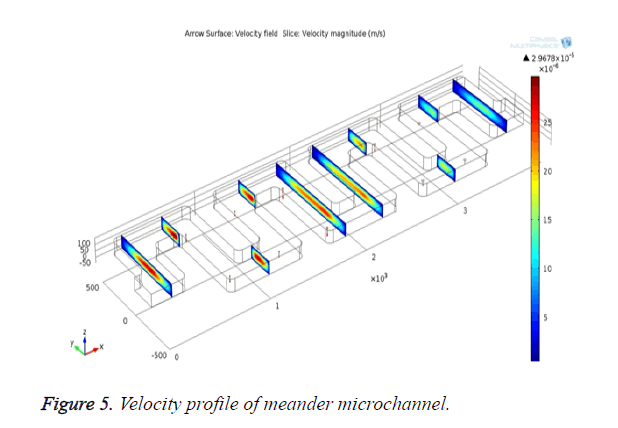 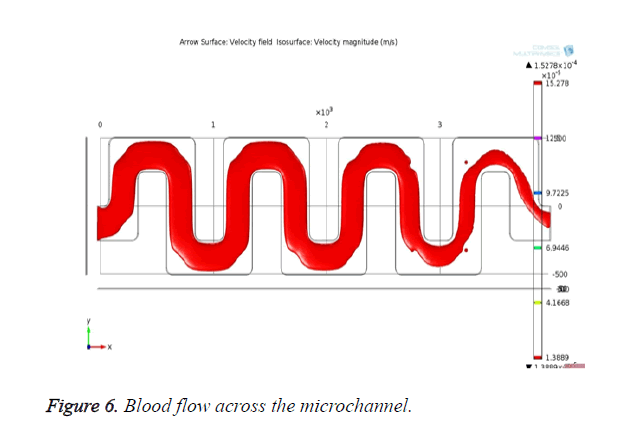 Figure 6. Blood flow across the microchannel. 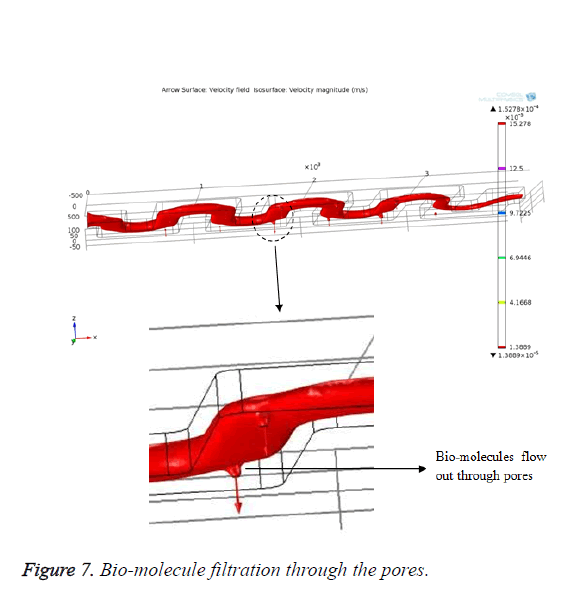 Figure 7. Bio-molecule filtration through the pores. 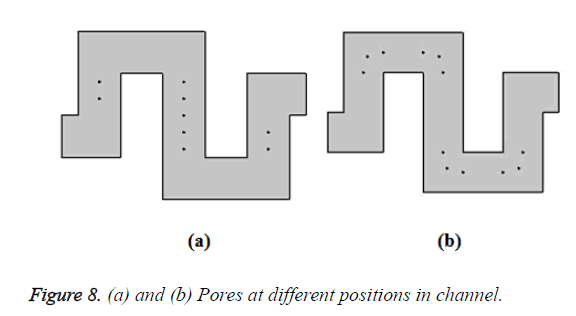 Figure 8. (a) and (b) Pores at different positions in channel. 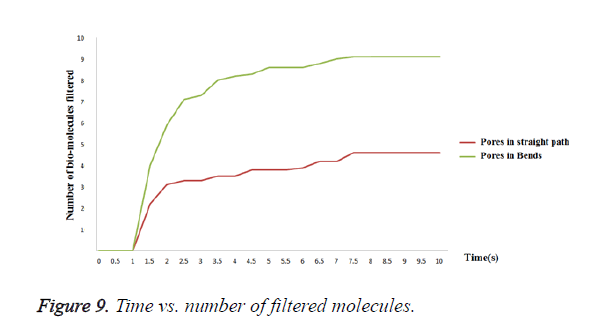 To filter the bio-molecules effectively, the flow through the microfluidic channel should be laminar. Reynolds number decides the whether the fluid flow is laminar or turbulent. Reynolds number, Re is a measure of flow behavior of fluid inside the micro channel. The equation for this dimensionless relation is given by

Where, ρ is the density of fluid

v is the velocity of fluid through the channel

L is the length of channel

μ is the viscosity of fluid

Table 3. Inlet velocity and its corresponding Reynolds number for channel with width 250 μm. 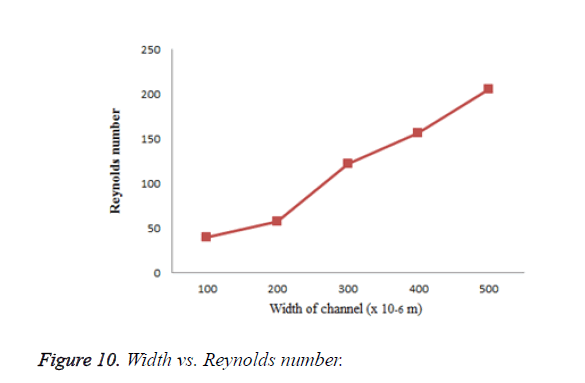 To have effective filtering, the structure is designed with multiple bends instead of straight microchannel. As there is bends in microchannel, the velocity (flow speed) of microchannel is reduced and thus more number of bio-molecules can be separated. There will be losses like pressure drop, bend loss, friction loss, etc. that exists at each bend.

It is easy to characterize the total loss by finding the loss at the single bend. Pressure drop is directly proportional to the inlet velocity and dimension of the microchannel and it given by

L is the length of the microchannel

Ρ is the density of fluid

U is the velocity of fluid

Dh is the hydrodynamic diameter

Dh=2wd/(w+d) Where w and d is the width and depth of the channel.

The loss due to the pressure drop is related as

Consider single bend of the designed meander microfluidic channel as shown in Figure 11. Bend loss can be calculated by using Bend loss coefficient which can be determined as 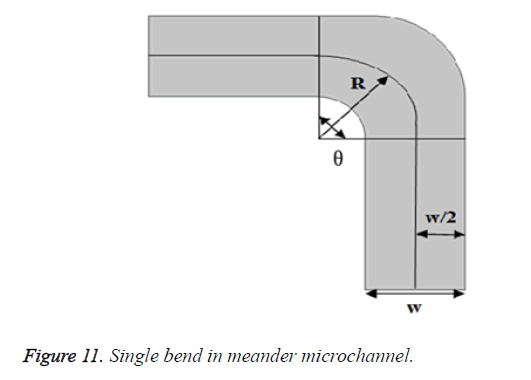 θ is the bend angle

R is the bend radius

w is the width of channel

Re is the Reynolds number

The friction factor is calculated as

Re is Reynolds number

a is aspect ratio

Thus the biofilter is designed for separation of biomolecules. The flow behavior through the microchannel is analysed and its geometrical parameters are calculated. The theoretical calculations prove that the flow is laminar. This microfilter can separate the RBC, WBC, platelets from whole blood. Silicon based microfilter has the advantage of rapid separation and collecting different biomolecules at the same time. Microfilter overcomes the drawbacks of existing methods for biomolecule separation which is a timely process.

The designed biofilter can be implemented in real time by porous silicon for filtration of biomolecules. The electrochemical etching process is the principle for the fabrication of porous silicon. After etching process of porous silicon one unit of blood sample is injected to porous silicon, the filtered biomolecules is verified by using SEM/TEM. Further the filter can be integrated as a chip and it is widely used in application such as cell sorting, cell lysis, DNA amplication, In future biofilter used as a device for counting the RBC, WBC, Platelets in one unit of blood.