Short communication: A rare case of vaginal dermoid cyst: A case report and review of literature

Vaginal dermoid cyst is a rare condition. Ultrasound is the investigative tool for such an entity which may be treated surgically through a transvaginal approach

A 36 year old non-pregnant (G0P0) woman presented to her family physician for treatment refill of her bronchial asthma medications. A gynecological exam had not been performed for the last three and half years. Her family physician decided to perform a well women exam which was difficult to do because of a mass in her vagina.

An ultrasound was requested which showed a solid non-vascular mass measuring 8.4 cm. by 7.5 cm by 6.1 cm, with low level echogenic material as well as echogenic bands, situated within the posterior wall of the vagina, in the rectovaginal space; the rest of the pelvis was normal; with an impression of a dermoid cyst.

The patient was referred to the Gynecology Oncology clinic for further evaluation and management.

Examination revealed a smooth mass on the left side, just above the vaginal introitus, extending up to the cervix, and was non tender. Pelvirectal exam revealed an appro- ximately 8 by 8 centimeters mass filling the rectovaginal septum to the left.

Under general anesthesia this cyst was removed. Incision was made on the vaginal mucosa on top of the mass extended toward the cervix, measuring approximately 6 cm (Figure 1). The mass surface was identified, blunt dissection was carried out (Figure 2), the mass ruptured revealing a sebaceous material (Figures 3, 4) which was extruded and collected in a bowl. The cyst wall was then dissected free from the rectovaginal space with good homeostasis. Incision was sutured with a running locked 0 Vicryl suture, and a vaginal pack was inserted. 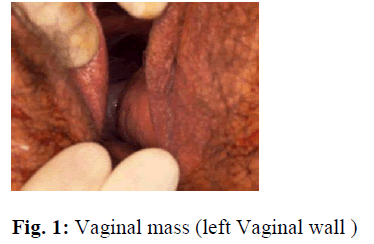 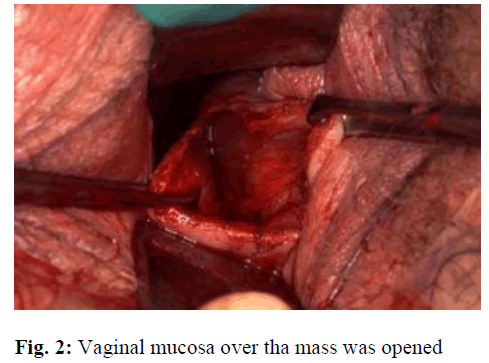 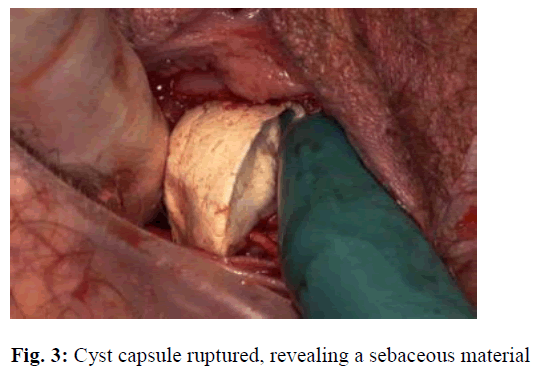 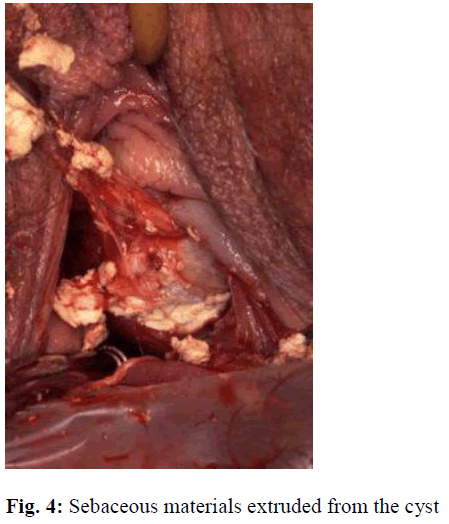 The patient was discharged next day after removal of the vaginal pack in good condition. Histopathological examination of the cyst wall, showed keratinized stratified squamous epithelium. There were few sebaceous and apocrine glands noted. The periphery showed chronic inflammation and occasional skeletal muscle tissue. No immature cellular elements were noted. The findings were consistent with a diagnosis of a dermoid cyst.

Ovaries are the commonest site for this tumor, where it is the commonest neoplastic tumor in children and adolescent accounting for more than half of ovarian neoplasms in women younger than 20 years of age. More than 80% of ovarian benign dermoid cysts occur during reproductive years.

A dermoid cyst has also been reported from other parts of the human body other than the ovaries, with rare occurrence. It can be any where in the gastrointestinal tract from the floor of the mouth to the colon [2,3,6,7].

Dermoid cysts have also been reported in male patients, in different parts of their body [6].

Vaginal dermoid is a rare condition. Only five cases have been reported in English literature. First observed in 1899 by Stokes [9], who reported a 44 year old woman who had a 1 centimeter cyst removed from just within the hymen. The cystic contents showed neumerous sebaceous glands and a few hair follicles. Curtis [1] described an ulcerated orange-sized necrotic cyst, containing hair and sebaceous materials in the vaginal mucosa. Johnston [5] described a 4-inch cyst that passed from the vagina in a woman following delivery of her second child. The cyst was filled with thick sebaceous material with matted hair and had been attached to the vaginal wall by a narrow stalk. Hirose et al [4] reported another case, having repeated painful right vaginal wall cyst, which was excised and was found to be a dermoid cyst confirmed by histopatological examination.

Preoperative diagnosis of the exact nature of a vaginal cyst can be difficult. S.S. N. SIU et al [8] reported the sonographic characteristics of a vaginal cyst, which was consistent with a dermoid cyst and was confirmed by histopathological exam after surgical excision of the cyst. The same sonographic features were found in our case.

Transvaginal excision of this type of cyst appears to be an appropriate surgical treatment option which was inconformity with some of the previous cases [4,8,9].

Vaginal dermoid cyst is a rare condition, which can be diagnosed with ultrasound. Transvaginal excision appears to be an appropriate surgical treatment option.