Background and Aims: Investigation of sexual dimorphism and sex determination has important implications in forensic sciences, anthropology and archaeology. As the strongest human teeth, canines are excellent for this purpose. This study investigated sexual dimorphism in maxillary and mandibular canines. In addition, cut-off points for sex determination were measured.

Method: The sample comprised 220 dental casts, taken from dental students of Azad University in Tehran, aged from 18 to 22 years. The mesiodistal and buccolingual dimensions of all 4 canines were measured using callipers. Data were compared using independent samples and paired t-tests. A formula was drawn to identify gender based on canine measurements.

Conclusion: Dimorphism of the canines could be used as a reliable device to identify gender in forensic sciences.

Gender determination is an important aspect of forensic sciences and archaeological examinations. Anthropometric measurements of the skeleton and its comparison with standards may assist in differentiating between male and female [1]. When bones are fragmented or burned, a proper choice is usually the teeth [2,3]. Teeth are known as the most durable body components and can stand at high temperatures, air disasters, hurricanes, and decay for a duration much longer than other organs [4,5].

Among teeth, canines might be the key tooth, because they are rather large, are less likely to decay and periodontal diseases, usually remain in the mouth when most or all other teeth are missing or extracted due to caries, and due to stronger structures (greater bulks and root lengths), might endure severe post-mortem conditions such as explosions and air disasters [1,6-8].

Studies show that dental traits depend on genetics and environmental factors such as the area of residence [6-17]. Studies have attempted to relate tooth dimensions with factors such as sex [6-17]. To our knowledge, no study has been done so far in Iran regarding this issue. Therefore, the current study was conducted to evaluate the gender differences in maxillary and mandibular canines of Iranian people and possibly to draw a proper formula for identifying gender based on dental measurements.

Normality of all measurements was confirmed using Shapiro- Wilk test. Independent sample t-test was used for comparing the mesiodistal and buccolingual size in males and females. Paired sample t-test was applied to compare measurements in left and right sides. Multiple logistic regression models were used to assess sexual dimorphism and develop statistical equation models to determine sex. For this purpose, stepwise forward technique was employed for generating several equations by considering preservation or the availability of dentition. A predicted probability of 0.5 (corresponding to Logit P (or Log P/(1-P)) or a logistic regression equation of zero was considered as the cut-off for determination of gender. The used dimensions were a combination of (1) mesiodistal and buccolingual dimensions of all canine teeth, (2) MD and BL of maxillary canines, and (3) MD and BL of mandibular canines. A p value less than 0.05 was considered as statistically significant. All analyses were performed with SPSS v20.0 software (IBM, USA). 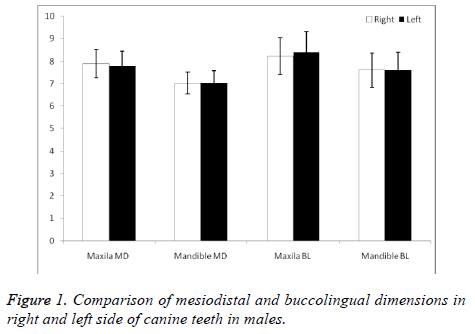 Figure 1. Comparison of mesiodistal and buccolingual dimensions in right and left side of canine teeth in males. 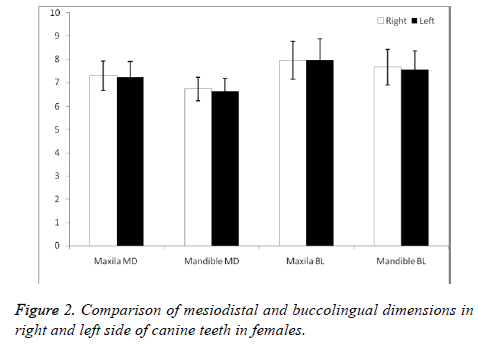 Figure 2. Comparison of mesiodistal and buccolingual dimensions in right and left side of canine teeth in females.

Several forward stepwise multiple logistic regression models were used to develop formulae to determine sex and the accuracy of estimation. The first equation contained all MD and BL dimensions of canine teeth (Table 2). This model selected the variables MD of maxillary right canine (#13), MD of mandibular right canine (#43) and BL of mandibular left canine (#33) as the most contributory for classification purposes (Table 2). The first equation can be written as follows: Logit p=-13.53+1.48 (MD of canine #13)+1.27 (MD of canine #43)-0.84 (BL of canine#33). In this equation if the value is greater than zero, the individual will be classified as male otherwise as female.

In this study the mean values of all mesiodistal dimensions and maxillary buccolingual dimensions were statistically greater in males than in females. The findings of this study agree with other odontometric studies that same result not only for humans but also anthropoid apes and some monkeys [18]. Canine teeth of both jaws are more dimorphic than others and male have significantly greater buccolingual dimensions in all upper teeth [18]. Also, a research in 2013 found that sizes of male teeth were larger than female and canines were the greatest sexually dimorphic teeth [19,20]. Sex dimorphism is not limited to canines, as it is shown that in Iranians all permanent teeth except maxillary central and lateral incisors and mandibular lateral incisors might show sexual dimorphism at least in one of their mesiobuccal or labiolingual dimensions [21].

Different factors can affect human tooth size and dimorphism [6-17,22]. Current gender differences in tooth size relate to sex-dependent differences in body bulk that exist in any given human population. These are attributed to adaptive reasons and development of food processing techniques which led to the reduction of both male and female dental dimensions [23]. Canines in both jaws might show sexual difference while other teeth are less likely showing such differences [24,25], and dimensions are larger in males [25]. In another study, it was observed that the mean values for right and left maxillary and mandibular canine widths were greater for males than females but not statistically significant [4]. In a longitudinal study on mesiodistal diameters of the primary and permanent teeth in southern Chinese, it was found that the most dimorphic permanent teeth were canines; mesiodistal width of male teeth were more than those of female except for mandibular lateral and central incisors in both dentition [26]. The present study also indicated that the mandibular and maxillary canine teeth were larger in males than in females. The teeth with highest sex dimorphism were canines also in Nepalese [26]. Nevertheless, the study on Nepalese dentition showed that the mean values of mesiodistal and buccolingual widths of the mandibular left canine and the mean values of mesiodistal determinations of the mandibular right canine were larger in females than males [26]. It may be due to different genetic and environmental factors [26].

In this study, a formula was established to determine gender based on a given dental measurements. This formula might be reliable mostly to its ethnicity of origin, as it is known that many dentoskeletal features might vary between ethnicities [27-31]. Future studies should evaluate its accuracy in other populations. Also similar formulas should be found in other ethnicities. It is better to assess reliability of measurements in future studies. Additionally, all human teeth are under constant wearing throughout life time, which can narrow down the validity of our equations to sound young tooth.

Canine teeth can be used for gender determination, according to the formula established for the first time, in the present study. Future research is warranted to evaluate other teeth as well as other ethnicities.