Serum prolidase levels and its relation with severity of acne vulgaris

Background: The pathogenesis of acne vulgaris is multifactorial and inflammation plays a prominent role in the process. In clinical trials, independent from tissue type; it is found out that prolidase levels and activity are differing in numerous malign and chronic inflammatory processes on which collagen turnover is accelerated. This study aims to evaluate the relationship between serum prolidase levels and acne severity in acne vulgaris.

Methods: Thirty patients with mild to moderate Acne Vulgaris (AV), 30 with severe AV and 28 healthy volunteers were included in the study. The GAS was used to determine disease severity in patients with AV. Serum prolidase levels were measured by ELISA method.

Results: There were not statistically different between the groups in term of serum prolidase levels (p=0.819). In addition, there was no statistically significant difference between the two groups (p=0.647 for AV groups, p=0.926 for severe AV and healthy control, and p=0.539 for mild-moderate AV and healthy control). There was no statistically significant correlation between GAS and prolidase levels in patients with severe AV (r=0.207, p=0.273) and mild-moderate AV (r=0.162, p=0.392).

Conclusions: In conclusion, there was no significant difference in serum prolidase levels in patients with AV. New studies with wide case series are necessary to determine the role of prolidase on the pathogenesis of acne vulgaris.

Acne Vulgaris (AV) is an inflammatory disease of the pilosebaceous unit that is usually seen in adolescents and young adults. With the effects of androgens arising during puberty, sebum synthesis and secretion by the sebaceous glands accelerates. As a result, sebum accumulates in the follicular duct and destroys the follicle wall. After this damage, sebum, keratin, Propionibacterium acnes (P. acnes) and its enzymatic activity products (from the hydrolysis of sebum), and free fatty acids spread into the surrounding tissue. These immunogenic agents play a prominent role in the production of proinflammatory cytokines and initiating an inflammatory response in perifollicular tissue [1].

With the inflammation, angiogenesis and fibroblast migration occurs, and Matrix Metalloproteinases (MMP) are activated in the tissue. In the collagen cycle, prolidase, a cytosolic exopeptidase, plays a prominent role in the last step of the degradation of proline containing peptides and in recycling them. Prolidase is important in the rearrangement of growth and transcription factors, in wound healing, inflammation and angiogenesis [2].

Studies have determined that in dermatological conditions like psoriasis vulgaris and keloids, as well as in diseases with an accelerated collagen cycle like rheumatoid arthritis, and in chronic liver disease and osteoarthritis, Serum Prolidase Activity (SPA) is increased. Furthermore, serum prolidase, a sensitive inflammation marker, is found at increased levels in many chronic inflammatory diseases with accelerated collagen turnover [3]. Prolidase levels are also higher in the wound healing process [4]. To our knowledge, there is no study in the literature about inflammation and scar formation and their relationship to serum prolidase levels in the acne vulgaris.

This study aims to evaluate the relationship between serum prolidase levels and acne severity in acne vulgaris.

We conducted this study from March 2015 to August 2016 with patients from our dermatology clinic. We obtained permission from the local ethical committee as well as from our volunteers. The patients who were taking acne-inducing medications or who had a history of endocrinopathy, a malignancy or a systemic disease (an autoimmune disease or an infectious disease) were excluded.

The Pearson chi-square test was used for qualitative data (gender). Median (min-max) values and the mean ± the standard deviation were given as descriptive statistics. After the Kruskal-Wallis variance analysis, it was determined that p<0.017 by making the Bonferroni correction for comparisons.

There was no statistically significant difference based on gender between the groups of acne cases (p=0.468). In the group with severe AV, the GAS mean was 33.30, while the mild to moderate AV group had a GAS mean of 14.23. 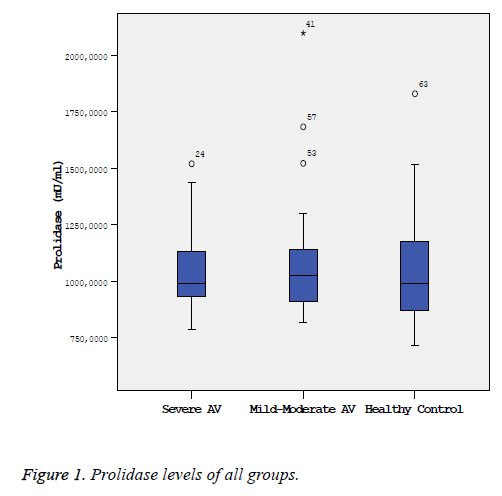 Figure 1: Prolidase levels of all groups.

In this study, there was no difference in prolidase levels between acne vulgaris patients and healthy controls.

Prolidase is acknowledged as the key enzyme for proline liberation and hydroxyproline residues on the collagen metabolism and cycle and letting them join to collagen structure. Prolidase activity levels vary with the destruction of collagen, which is found in different types and different ratios on the extracellular matrix [6-16].

Acne vulgaris is a chronic inflammatory disease that can result in scarring. It is acknowledged that increased inflammation and the severity of the acne aggravates the risk for developing cicatrices. It is known that scarring develops with an increase in acne severity. Acne and atrophic type cicatrices are most commonly seen in acne vulgaris [18]. Guven et al. [4] and Surucu et al. [19] have shown that, prolidase levels were found to be higher than those of the control groups, independent of the severity of the disease in chronic plaque psoriasis. In our study, in the group having mild to moderate AV, serum prolidase levels were higher than in the severe AV and healthy control groups, but the results were not statistically significant (p=0.539). This finding caused us to hypothesize that prolidase might be a factor related to developing inflammation; that it related to the initiation of inflammation in the microcomedonal stage. It also caused us to hypothesize that serum prolidase levels were decreasing due to collagen destruction in the process of scar formation.

Eren et al. [20] have shown that prolidase levels are correlated with high levels of C-Reactive Protein (CRP), and are higher in diabetic patients having foot ulcers than in diabetic patients without foot ulcers and in healthy controls. As a result of this study, they put forth the argument that prolidase activity could be a sensitive marker reflecting the inflammatory process.

The limitations of the study were the small numbers of participants in the groups, and the fact that no substantial inflammatory marker synchronous with prolidase was investigated.

In conclusion, there was no significant difference in serum prolidase levels in patients with AV. However, to fully evaluate the relationship between prolidase and AV, molecular studies utilizing large groups of cases may be important. For this reason, new studies are needed in the future.