Background/Aims: Hepatitis B Virus (HBV) infections cause chronic infection, cirrhosis, and hepatocellular carcinoma. In this study, we aimed to demonstrate that the Serum Prolidase Activity (SPA) is one of the indicators of chronic hepatitis B related liver fibrosis.

Materials and Methods: Diagnosis of prolonged hepatitis B (CHB) was determined with hepatitis B surface antigen (HBsAg) positivity for more than 6 months. All CHB cases were followed up with liver enzymes (ALT, SAT, GGT, bilirubin), HBV DNA and sonography at least once a year. Patients, who were pregnant, or taking sclerosing treatment or cancer treatment and treatment of diabetes were excluded from the study. The control group was designated randomly from individuals’ not caring hepatitis B surface antigen. SPSS 20 was used for statistical analysis. A p value was <0.05 was used meaningful.

Conclusions: SPA activity is considerably increased in CHB patients having liver damage. So, we think that SPA can be candidate as a non-invasive biomarker for liver fibrosis.

Hepatitis B Virus (HBV) infection is one of the serious health concerns around the world. Approximately two billion people infected with HBV in the worldwide. Chronic HBV infection (CHB) is closely related with progression of hepatocellular carcinoma and cirrhosis [1-3].

It is showed that Liver’s Stellate Cells (LSC) is a main factor as a fibrogenic response [4]. These cells contain a small number of oil droplets, Granular Endoplasmic Reticulum (GER) with enlarged volume and the Golgi apparatus. These cells are also called as fat-storing cells, lipocytes and perisinusoidal cell. Developing inflammation during viral hepatitis illness is important trigger for fibrogenic response and cirrhosis. The expansion of cirrhotic LSC groups in the liver occurs with myogenic fibroblastic differentiation [5]. It is known that liver fibrosis causes portal hypertension, impaired synthetic function, and ultimately leads to decreased cell life. Fibrogenic response can be reversed. Clear improvement in liver histology was demonstrated resulting long-term antiviral treatment in long-lasting hepatitis B and C [6].

Prolidase is a manganese dependent metalloproteinase enzyme that located in many tissues such as intestinal mucosa, kidney, liver, brain, heart, uterus, thymus, erythrocytes, leukocytes, fibroblasts and plasma. Prolidase enzyme (Enzyme code, 3.4.13.9) is responsible for the destruction of dipeptides containing C-terminal proline and hydroxyproline. These peptides related with in the last stage of protein catabolism. Chronic repeated infection, mental deficiency, splenomegaly and dermatologic lesions can be seen in the absence of prolidase activity. Proline and hydroxyproline amino acid groups which are liberated by the prolidase enzyme constitute about 25% of the collagen tissue. Prolidase is also necessary for the maintenance of connective tissue [7-10]. So, in the presence of the liver fibrosis, it is expected to increase in prolidase enzyme activity. In this study, we tried to demonstrate that the Serum Prolidase Activity (SPA) is one of the indicators of chronic hepatitis B related liver fibrosis.

The study was performed at the Medicine Faculty, Sakarya University, Turkey. The subjects were provided by the Department of Infectious Diseases Clinic. Our institutional ethical committee approved this study (Number: 71522473/050.01.04/143, Date: 03/08/2016) and informed consent was procured from all participating subjects in the study.

This study was performed on 30 patients with chronic HBV (study group) and 30 healthy control (control group) cases who are applicant of Infectious Diseases Clinic in Sakarya University Hospital. Diagnosis of chronic hepatitis B was made by HBsAg positivity in the blood for more than 6 months. Study group was followed up with liver enzymes, HBV DNA and ultrasonography at least once a year.

Morning blood samples taken from the arm vein were transferred into our laboratory and kept at -80°C until the day of analysis.

Histopathology activity index (HAI) and fibrosis score were determined as defined by Knodell et al. [11]. ALT levels at the time of liver biopsy were recorded.

Optimized method of Myara et al. was used [12,13]. Briefly 500 μL pre-incubation solution containing 1 mmol/L GSH, 5 mmol/L MnCl2, 0.1% Triton-X100 and 50 mmol/L Tris-HCl buffer (pH 7.8) was incubated with 100 μL serum for 3 h at 37°C. 100 μL of the mixture was taken and 100 μL pre-incubation solution containing 144 mmol/L Gly-Pro was added, then they were incubated for 30 min at 37°C. The reaction was ceased by adding 1 ml of 0.45 mol/L TCA into the mixture. The mixture was whizzed at 1500xg for 10 min to separate supernatants. 1 ml of modified chinard solution was added onto 0.5 ml of the supernatant. It was mixed in vortex for 30 s. The mixture was incubated at 90°C for 20 min. Then the absorbance of mixture was measured immediately at 515 nm in a spectrophotometer (Beckman Coulter DU 530 UV/Vis Spectrophotometer, USA) against the blank solution. The measured proline concentration was calculated comparing with 5 mg/dl L-proline used as a standard.

Table 1. Demographic and laboratory properties of the study subjects. 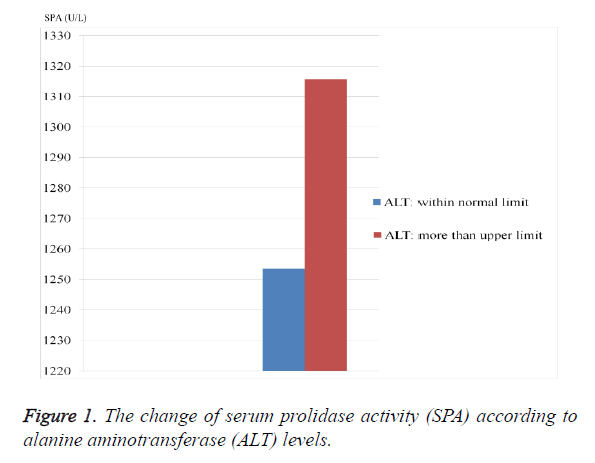 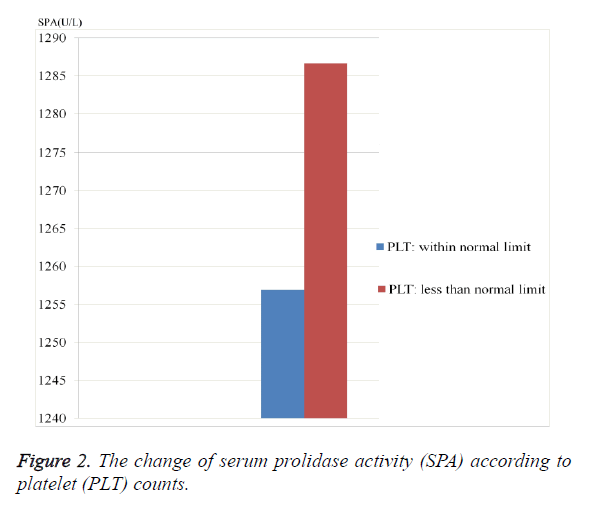 Figure 2. The change of serum prolidase activity (SPA) according to platelet (PLT) counts.

Accumulation of mainly interstitial collagen and other matrix components play a role on liver fibrosis. Normally the production and degradation of extracellular matrix stay in balance. However, it is broken during the fibrosis process [15]. Therefore, we think that the increase in necessity of SPA and collagen is correlated with the increased fibrosis in liver. Our results confirmed our theory and we found that there is a clear relationship between the SPA and liver destruction indicators. Due to provide basis for progression of cirrhosis or hepatocellular carcinoma, diagnosis of HBV infectious is crucial point for treatment of liver diseases. At some studies, it was demonstrated that the diagnosis of HBV infectious depends on presence of HBV DNA, the level of total bilirubin and the level of liver enzymes as ALT, AST, GGT and ALP [16-22]. In the case of increasing liver cell damage, the level of liver enzymes has been increasing, at the same time chronic inflammation has been increasing. In this study, it was found that the level of SPA is high in the subjects with hepatitis B having thrombocytopenia, high level of ALT and ALP.

With growing liver inflammation, the collagen degradation also accrues dramatically. So, SPA level is increasing with inflammation as seen at our study. This is because prolidase is an extracellular matrix element and cytosolic enzyme that is responsible for destruction of intra-extracellular collagen [23]. The level of SPA is significantly higher in the cases with chronic liver disease and clarified liver cell destruction. It is suggested that augmented collagen catalysis in the damaged liver cells leads to an increase in SPA level.

In a study, Sen et al. discovered that the SPA levels were significantly higher in children with chronic hepatitis compared to the controls [24]. Similar with us, the researchers found a significant correlation between ALT and SPA. Also, the low PLT value was related with high SPA level.

In cirrhotic patients, the relationship between the severity of cirrhosis and the progress of thrombocytopenia has been shown previous studies [5]. Also, we observed that activity of SPA was higher in patients who had advanced chronic liver disease with thrombocytopenia. According to our results, it is suggested that the detection of high level of SPA in patients having thrombocytopenia may be an important biomarker in showing forwardness of disease.

Consequently, it is thought that SPA activity significantly rises in liver damage related with chronic HBV and the level of SPA may be used as a non-invasive biomarker for estimation of fibrosis in the liver. At the same time, we also think that SPA can be used as an indicator of inflammation of the liver in HBV positive patients.