This study endeavours to evaluate the measurement of lipid peroxidation in patient with cerebral thrombosis and haemorrhage and also to correlate its level with the lesion size in these patients. Seventy five subjects were included in the study comprising 25 each of cerebral thrombosis and haemorrhage while 25 comparable subjects scored as control. Serum malondialdehyde (SMDA) as a measure of lipid peroxidation was estimated on first day of admission. The study emphasizes that SMDA levels were raised significantly (p < 0.001) in the study groups compared to control and varies according to size of lesion with significant correlation (P < 0.01). However, no correlation was found between large and small lesion of thrombotic and haemorrhagic study group, when compared between themselves. Therefore, it is concluded that SMDA is involved in the pathophysiology of these lesions and has definete corelation with the lesion size.

Free radicals and lipid peroxidation have been demonstrated to have significant role in human health and disease [1]. Their role in various disease conditions like diabetes mellitus [2], ischaemia and reperfusion injury in human myocardium [3,4] and pulmonary carcinogenity [5] have been well established. Furthermore, it has also been established experimentally in animal models using different techniques that free radicals are involved in the pathophysiology of neuronal death and apoptosis following ischaemia and reperfusion [6-9]. Increased levels of glutamate in cerebral cortex after cerebral ischaemia have also been reported [10] while significant reduction in infarct size and oedema was noticed by use of antioxidants [11].

Further studies in human beings suggested that oxidative stress is important in either the primary or the secondary pathophysiological mechanisms underlying acute CNS injury. In addition, reduction in the endogenous antioxidant defense system due to environmental and genetic factors may contribute to the evolution of oxidative stress [12]. Free radicals and related reactive oxygen species mediate much of the damage that occurs after transient brain ischemia and in the penumbral region of infarcts caused by permanent ischemia [13]. Polyunsaturated fatty acids are particularly vulnerable to free radical attack, because the double bonds within membranes allow easy removal of hydrogen ions by Reactive Oxygen species (ROS) such as OH [14]; the brain, being rich in lipids, is particularly vulnerable to damage by lipid peroxidation.[15] Free radicals can also damage proteins and nucleic acids like DNA, leading to subsequent cell death by mode of necrosis or apoptosis [16,17] in subjects with ischaemic stroke. As hemorrhage can cause ischemia by its local occlusive effects [18] , hemorrhagic strokes were also included in the study. The purpose of this study was to evaluate the level of SMDA as a measure of lipid peroxidation status and to correlate its levels with lesion size in these patients.

The study included fifty patients of acute stroke syndrome (twenty-five cases each of intracerebral haemorrhage and cerebral thrombosis) admitted to inpatient department of medicine presenting within 24 hours of onset, diagnosed by clinical assessment and computed tomography of head. Those who had blood in ventricular system or subarachnoid space, evidence of organic heart disease or other possible sources of cerebral embolism, and those who had suffered from transient ischaemic attach (TIA), were excluded from the study. Twenty-five healthy age and sex-matched subjects were taken as control group. Cases and controls with conditions known to be associated with free radical activity such as rheumatic arthritis, coronary artery disease and congestive heart failure were excluded from the study. The study was carried out in department of medicine in collaboration with interdisciplinary brain research centre, J.N. Medical College, AMU, Aligarh, India. All subjects in the study group presented with significant neurological deficits with variable level of sensorium. Fifty six percent patients of Haemorrhagic Stroke had past history of hypertension while it was only 40% in patients of thrombotic stroke. There was history of diabetes and dyslipidemia in 20% each while smoking was present in 36% of these patients. The mean systolic blood pressure in haemorrhagic group was 186+34 mm of Hg while diastolic Blood Pressure was 98+ 34 mm of Hg. The corresponding values in thrombotic group were BP of 136+ 23 mm of Hg. and 86+16 mm of Hg. All the patients in study group had 100% neurological deficit.

All the subjects were subjected to estimation of SMDA at the time of admission, as a marker of lipid peroxidation using the Nadigar et al method (1986) [19] as an indicator of free radical activity. This method is based on the colorimetric principle, by which acetic acid detaches the lipid and protein of tissue. Thiobarbituric acid reacts with lipid peroxide, hydroperoxide and oxygen labile double bond to form color adduct with maximal absorbance at 530 nm.

The lesion size was defined as large or small as product of length (cm) of longest axis of lesion and distance (cm) of lesion vertical to and across the mid point of the longest axis using computed tomography [18,20]. Accordingly 13 subjects of thrombotic group (n=25) were classified as large lesion while 12 subjects of haemorrhagic group (n-25) were labelled as large lesion. Rest of the subjects were with small lesion. The statistical analysis was done using Student’s ‘t’ test. 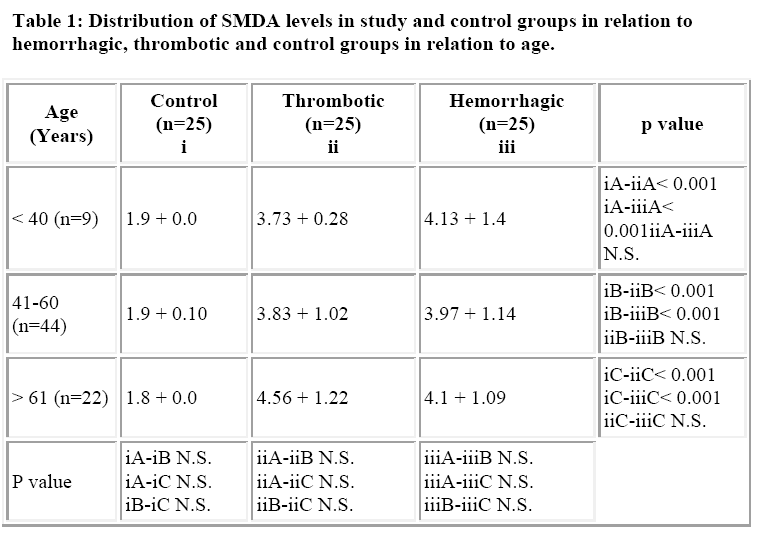 Table 2: Distribution of SMDA levels in study and control groups in relation to sex.

Table 3: Distribution of cases in thrombotic and hemorrhagic groups in relation to mean lesion size and SMDA levels

Strong evidences exist implicating the involvement of free radicals and lipid peroxidation in the pathophysiology of stroke [21]. Direct evidence for hydroxy radical generation comes from experimental studies showing increased conversion of salicylate to 2,3- dihydroxy benzoic acid during ischemia with reperfusion [6-9]. This increase occurs both during the ischemic phase as well as during reperfusion[7,22] correlating well with increase in extracellular glutamate concentration [10].

An increase in the striatal hydrogen peroxide concentration following global forebrain ischemia and reperfusion has also been documented{8}. Cerebral ischemia and reperfusion results in increased free radical production in both cerebral cortex and striatum as assessed by microdialysis with spin trapping in gerbils[6]. Free radical spinning compounds exert neuroprotective effect in both global and focal ischemia, and show neuroprotective effect when administered as long as 12 hours after middle cerebral artery occlusion [11]. Despite the strong experi-mental literature implicating oxidative injury and lipid peroxidation, there is very little evidence of the same in human stroke [18,23].

No specific relationship between the type of stroke and the age of the cases was seen as against the maximum incidence reported in the age group 60-70 years [24] and > 75 years[25]. The difference has been attributed to the changing disease trends in developing countries compared to western world and also due to shorter life span in developing countries due to various causes. There was no significant association of the incidence of stroke with the gender of the patients, and are in accordance with the observations in various studies, though a ratio of male:female of 1.5:1 for a major infarction, and 1.1:1 for cerebral haemorrhage has also been reported[25].

The difference in SMDA levels in cases and controls was seen to be statistically significant (p<0.001) suggesting an increase in the level of lipid peroxides conforming to the observations of other authors[18,26]. However, the SMDA levels in these studies are quite at variance with present values of 4.03 + 1.04 nmol/dl vs 2.4 + 04 nmol/dl in haemorrhagic and 4.16 + 0.4 vs. 2.3 + 1.04 nmol/dl in thrombotic stroke [18]. The difference could be due to the different methods employed in the estimation and also because lipid peroxidation has a wide range. It depends upon several factors like diet and lifestyle of the individual[27].

The results of the present study are consistent with the hypothesis that, rise in lipid peroxide in haemorrhagic stroke was due to the compressive effects producing ischemia[18]. Gantes et al have reported higher levels of SMDA like material in patients of thrombotic stroke compared to haemorrhagic stroke[23].

The significant correlation between lesion size and level of lipid peroxide in both cerebral haemorrhage and thrombosis as observed in present study is in agreement with earlier studies [28]. But higher levels of SMDA like material were detected in thrombotic stroke compared to haemorrhagic group[23]. This difference may be due to variable trapping of lipid peroxide in ischemic brain lesions. Also preserved blood brain barrier may interfere with their release. The amount of lipid peroxide produced locally may also be affected by local factors like acidosis which have been reported to enhance local lipid peroxida-tion markedly by increasing free radical production [18].

A currently unsettled question is the source of lipid peroxide in ischemic brain injury. It is suspected that increased level of lipid peroxide may be due to oxidation of blood or neural lipids during ischemia. Brain nucleic acids may be metabolised to purine and nucleoside bases resulting in excess of adenosine which then becomes a substrate for xanthine oxidase pathways, which are important in the generation of free radicals [29]. During ischemia there is an increase in cytosolic calcium which may activate phos-pholipases[30], activate proteases leading to conversion of xanthine dehydrogenase to xanthine oxidase[31] or activate protein kinases causing free radical production [32]. The exact nature of oxidative stress can only be elu-cidated by further studies.

Based on the light of the above findings it may be concluded that SMDA could be used as a marker for gauging the extent of lesion size in stroke.