Hypomagnesaemia is a common feature in patients with type-2 diabetes. It may be a cause or consequence of diabetes. This study was designed to find out the serum magnesium levels and its influence on serum lipids, in type 2 diabetics and how it is associated with the duration & complication of the disease. 45 known diabetic patients and 25 controls were taken for the study in and around Puducherry. The mean length of time the patients were diagnosed as diabetics were, 7.28 (± 2.1) years. This period was taken as the duration of disease. The serum magnesium and HDLc were significantly lowered (p<0.001) and all other lipid profile levels (TG, TCh, LDLc, VLDLc) were significantly higher (p<0.001) in cases. Our correlation study revealed a significant negative association between Serum Magnesium (Mg) and fasting plasma glucose and duration of the disease expressing its role in complication processes. Serum Mg also depicted significant negative relation with TG and VLDLc (r= -0.519,r = -0.518) and positive relation with serum HDLc (r =0.741), which explains associative evidence of its role in dyslipidemia. Our study substantiates the known importance of Mg supplementation in diabetics to prevent complications.

Magnesium (Mg) is an important intracellular cation that is distributed into three major compartments: mineral phase of bones (65%), intracellular space (34%) and extracellular fluid (1%) [1]. Magnesium is needed for more than 300 biochemical reactions in the body. Magnesium helps to regulate blood sugar levels, promotes normal blood pressure, and is known to be involved in energy metabolism and protein synthesis [2,3]. Diabetes mellitus is a metabolic disease of growing concern. Type-2 diabetes is characterized by insulin resistance and usually relative insulin deficiency. Most of these patients are obese and at increased risk of developing macro vascular complications. In these patients insulin secretion is defective and insufficient to compensate for the insulin resistance [4].

Magnesium plays an important role in carbohydrate metabolism. It may influence the release and activity of insulin, the hormone that helps to control blood glucose levels [5]. Low blood levels of magnesium are frequently seen in individuals with type-2 diabetes. Hypomagnesaemia may worsen insulin resistance. The kidneys possibly lose their ability to retain magnesium during periods of severe hyperglycemia (significantly elevated blood glucose). The increased loss of magnesium in urine may then result in lower blood levels of magnesium [6]. Insulin resistance and magnesium depletion result in a vicious cycle of worsening insulin resistance and decrease in intracellular Mg2+ which limits the role of magnesium in vital cellular processes [7]. But various studies have given contradictory results [8,9].

Other studies show association of low serum magnesium with dyslipidemia in type-2 diabetes mellitus (DM) [10]. A number of studies have reported beneficial effects of magnesium supplementation on plasma cholesterol and LDLc (low density lipoprotein-cholesterol), and an increase of HDLc (high density lipoprotein-cholesterol) level [11-13]. Indeed, controversial reports are available regarding the effect of magnesium (Mg) on lipid profile and glycaemic control in diabetic patients [14].

Very few Indian studies have correlated all these parameters in DM patients. Due to the increasing prevalence of DM in India, we decided to explore the association of serum magnesium in Type 2 Diabetes with the established biochemical parameters.

Considering the above facts, the present study was conducted with an objective to evaluate the serum magnesium, fasting sugar and lipid profile in type-2 diabetes cases & to compare them with the controls and to correlate them, with other parameters.

The present study was conducted by the Department of Biochemistry, Aarupadai Veedu Medical College (A.V.M.C); Puducherry. Forty-five type-2 DM patients within age group of 38-68 years attending the Diabetic OPD and Medicine Indoor of A.V.M.C Hospital were included in this study. Type-2 DM patients were diagnosed on the basis biochemical investigations as per WHO criteria [15].

Twenty-five age and sex matched apparently healthy individuals with normal plasma glucose & with no symptoms suggestive of DM were taken as controls. Patients with acute & chronic inflammatory conditions, other metabolic conditions like ketoacidosis, cerebrovascular disease or renal diseases as well as smokers, alcoholics, and primary hypertensive were excluded from the study. All the diabetics were under treatment with oral hypoglycemic agent or insulin - Insulin crystal injections with various dosages. None of the subjects were on lipid lowering drugs. The study was approved by the institutional ethical committee. Body mass index (BMI) was calculated using the standard formula (weight in kilograms /height in meter-square: kg/m2) to exclude obesity.

Both cases and controls were subjected to estimation of biochemical parameters. Blood samples were collected in fluoride tube for glucose and Clot activator tubes for other estimations after an overnight fast.

Specific tests for serum Magnesium was done by collecting the blood in heparinized green capped plastic tube. Magnesium was estimated by a kit purchased from Reckon Diagnostics, India that uses calmagite dye method [17]. The reference serum or plasma magnesium level by this method is 1.6-2.5 mg/dl. The principle of this method is that magnesium forms a purple coloured complex when treated with Calmagite dye in alkaline solution, chelating agent and detergent present in the reagent will help out interference occurring from Calcium and Proteins. The intensity of the purple colour is proportional to magnesium concentration.

The data was analysed using Microsoft excel 2007. For the comparison of values between the groups, students‘t’ test was used, represented by P value. Statistical significance was considered at P value < 0.05. For the correlation, Pearson’s' correlation coefficient was used. Column charts are used to compare values across categories. Scatter chart was used to compare pairs of values.

The age distribution of patients and controls were between 38-68 years (Table 1). Out of 45 diabetic patients 27 were males and 18 were females. Out of 25 controls 16 were males and 9 were females. BMI (Table-1) of diabetics were found to be more than the controls (p<0.001). Routine Biochemical investigations registered a significant rise (p < 0.001) of fasting plasma glucose, Triglycerides( TG) ,Total Cholesterol (TCh), LDLc and VLDLc in diabetics, in comparison with controls (p<0.001) (Table 2).

There was a significant negative association between serum magnesium and age of both control and cases (r= - 0.77, p <0.001; r = -0.769, p < 0.001) (Tables-3, 4 and Figure-1). In cases, the serum magnesium had significant negative correlation with TG and VLDLc (also negatively related to TCh and LDLc ) and strong positive association with HDLc (Table-4) (Fig-4).This might point out the contributory role of magnesium towards dyslipidemia. 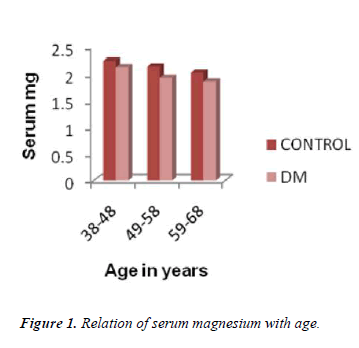 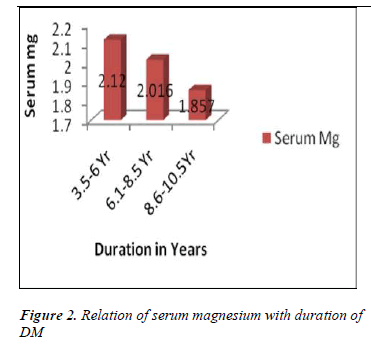 Figure 2: Relation of serum magnesium with duration of DM. 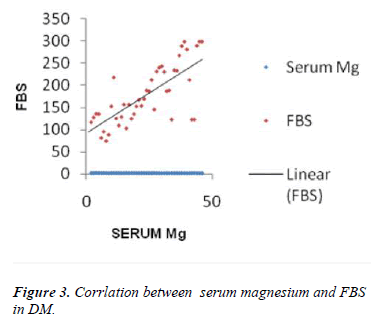 Figure 3: Corrlation between serum magnesium and FBS in DM. 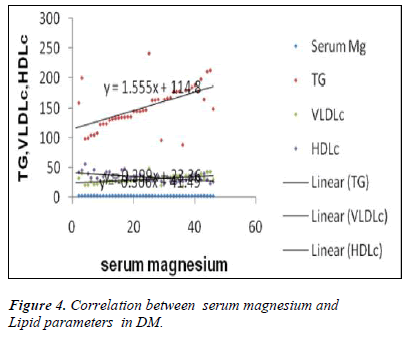 Figure 4: Correlation between serum magnesium and Lipid parameters in DM.

Magnesium is a cofactor for several enzymes involved in carbohydrate metabolism. There is a strong relationship between magnesium and insulin action. Magnesium is important for the effectiveness of insulin. A reduction of magnesium in the cells strengthens insulin resistance [18,19]. A poor intracellular magnesium concentration, as found in uncontrolled type-2 diabetes mellitus and in hypertensive patients, may result in a defective tyrosinekinase activity at the insulin receptor level [20]. The intracellular enzyme; tyrosine- kinase requires magnesium to allow insulin to exert its blood-sugar-lowering effects. In several studies, daily oral magnesium supplementation substantially improved insulin sensitivity by 10 percent and reduced blood sugar by 37 percent [21,22]. Hypomagnesaemia can increase platelet reactivity, increase vascular and adrenal responses to angiotensin II, enhance thromboxane A2 (TXA2) release, and lead to organ damage from free radicals [23,24].

The principal findings of the present study was a significant inverse correlation of serum Mg with age in both DM as well as normal controls which is similar to the findings of Nasri et al [10]. We got a significant negative correlation of serum Mg with fasting blood sugar and duration of the disease in diabetic patients. Hypomagnesaemia has been observed in both animal [25,26] and human subjects with type 1 and type 2 diabetes mellitus [27,28]. The etiology of hypomagnesemia in diabetes cannot be clearly explained and serum magnesium levels have been shown to be inversely related to the severity of diabetes [29]. The mechanisms of long-term complications of diabetes are not clearly explained, and hypomagnesaemia may be a contributing factor to these complications, particularly ischemic heart disease [19], retinopathy [30,31] and bone loss [32].

According to ADA (American Diabetes Association) , serum magnesium levels should be measured in diabetes patients at high risk for magnesium deficiency who have diabetes with concomitant conditions like Acute myocardial infarction, Calcium deficiency, Congestive heart failure, Ethanol abuse, Ketoacidosis, Long-term parenteral nutrition, Long-term use of certain drugs (such as diuretics, digoxin, or aminoglycosides) ,Potassium deficiency and Pregnancy. ADA recommends that magnesium levels should be measured in such patients and repleted if deficient [36]. Our study suggests that diabetic patients should take magnesium rich foods like whole grains, legumes, fruits and vegetables (especially dark-green, leafy vegetables) every day which will help to provide recommended intakes of magnesium and maintain normal storage levels of this mineral. Dietary intake of magnesium can often restore mildly depleted magnesium levels but magnesium supplementation is required to restore very low magnesium levels to normal. However, the association between lipid abnormalities and hypomagnesaemia has not been fully understood in humans and need further studies.