Depression is the third leading contributor to the global disease burden [1] . Clinical depression in the elderly is common and is also frequently confused with the effects of multiple illnesses and the medicines used to treat them. Depression within the geriatric patient is an important issue as it is associated with increased mortality. Such depression may have a different aetiology to that in younger patients and be associated with comorbid chronic physical health problems or cognitive impairment [2].

Mirtazapine is an atypical antidepressant, which is a noradrenergic and specific serotonergic antidepressant, and is thought to result from a combination of noradrenergic and serotonergic effects, with the latter specifically involving enhancement of serotonin 5-HT1 receptor-mediated effects [3]. Mirtazapine has predominantly been evaluated in the treatment of major depression and is approved in many counties for use in the treatment of major depression, which is effective and well tolerated for the treatment of patients with moderate to severe major depression [4]. Monotherapy with mirtazapine 15-45 mg/day leads to rapid and sustained improvements in depressive symptoms in patients with major depression, including the elderly. It is as effective as other antidepressants and may have a more rapid onset of action than selective serotonin reuptake inhibitors [3]. Limited evidence suggests that for certain elderly patients, mirtazapine may be preferable to sertraline for treatment of depression. It may also be more cost-effective in patients who have dementia. The choice is highly dependent upon individual comorbidities and subsequent polypharmacy [5].

A growing body of evidence shows that brain-derived neurotrophic factor (BDNF) plays a role in depressive disorder. BDNF is important for maintaining synaptic function and neural plasticity [6]. Study shows that treatment of depression improves serum BDNF level which may be considered as a nonspecific peripheral marker of depression [7]. These results support the hypothesis that BDNF might play a critical role in the pathophysiology of major depressive disorder and successful antidepressant treatment increases the attenuated BDNF levels in depressed patients [8, 9].

Few studies have reported BDNF serum levels in elderly depressed subjects and their relationship with antidepressant therapy. The aim of the study was to evaluate BDNF serum levels in elderly depressed patients before and after antidepressant treatment and to determine the relationship between the serum BDNF level and the response to mirtazapine in Chinese patients with major depressive disorder (MDD).

The present study was conducted from 2010 to 2013. Fifty eight in- and outpatients with MDD were recruited from the Department of Geriatric Psychiatry, the Wuxi Psychiatric Hospital, Nanjing medical University in China. The patients (21 males, 37 females) were diagnosed according to the Diagnostic and Statistical Manual of Mental Disorders (fourth edition) criteria for MDD with the consensus of at least two experienced psychiatrists on the basis of an unstructured interview and a review of all medical records [10]. Depression severity was assessed according to the 21-item Hamilton Rating Scale for Depression (HRSD). Only subjects with a minimum HAMD score of 18 were enrolled in the study [11-13]. The Clinical Global Impression rating scales (CGI) are used to measures of symptom severity, treatment response and the efficacy of treatments in treatment studies of patients with MDD [14, 15].

Mirtazapine was taken once a day for 8 weeks. Mirtazapine was initiated at daily doses of 15 mg/day. After 1 week, the dose was flexibly altered by each doctor based on the patient’s systemic clinical conditions and side effects at each visit (weeks 1, 2, 4, 8). The doses of mirtazapine were gradually increased to maximums of 45 mg/day, depending on the patient’s condition. Of 58 patients, the number remaining in the study was 4 at week 1, 6 at week 2, and 18 at week 4; 30 patients completed 8 weeks of mirtazapine treatment.

Subjects with primary or comorbid diagnoses of schizophrenia, schizoaffective disorder, rapid cycling bipolar disorder, dementia, or alcohol or substance dependence, based on DSM-IV criteria, within the previous 6 months were excluded. We also excluded subjects who had a personal or family history of substance abuse/dependence or other major psychiatric disorders prior to the study. Patients taking medications were subjected to a 2-week washout period; patients taking psychotropic medications or other medications that might influence mirtazapine metabolism were subjected to an 8-week washout period. Demographic data were recorded, and patients with serious or unstable medical illnesses were excluded. All subjects were at least 18 years of age.

After written informed consent was obtained, venous blood was drawn from each subject. The trial was conducted in accordance with good clinical practices and the Helsinki Declaration. This study was approved by the ethics committees at Nanjing medical University.

Blood samples were collected before antidepressive treatment and after remission (decrease to 7 points or less on HRSD). They were kept at room temperature for 1 h followed by 1 h at 4 °C before serum was isolated. Samples were centrifuged at 4 °C (3000 rpm, for 15 min using a refrigerated centrifuge). Remove serum and assay immediately or aliquot and store samples at <= -20 °C. Avoid repeated freeze-thaw cycles. Serum BDNF levels were measured using enzyme-linked immunosorbent assay (ELISA) kits (Quantikine Human BDNF, R&D Systems, Minneapolis, MN, USA) according to the manufacturer's instructions. Each assay was performed in duplicate.

The Student’s t test was used to assess the significance of the change in psychopathology scores from baseline to endpoint in each treatment group. All tests were two tailed, and group differences were tested at the p < 0.05 level. All statistical analyses were performed using SPSS 18.0 (SPSS Inc., Chicago, IL, USA).

The clinical efficacy of mirtazapine in geriatric patients with major depression

Table 1. The clinical efficacy of mirtazapine in geriatric patients with major depression 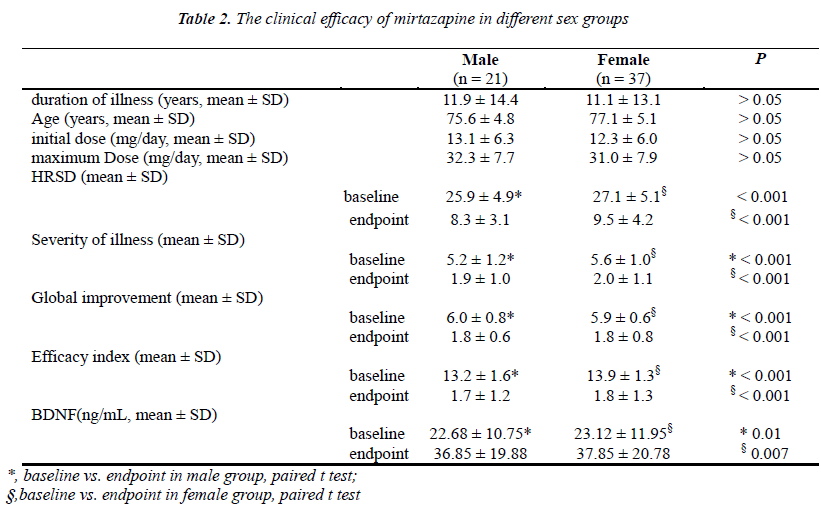 Table 2. The clinical efficacy of mirtazapine in different sex groups.

Depression impacts older people differently than younger people. In the elderly, depression often occurs with other medical illnesses and disabilities and lasts longer. Mirtazapine is a commonly used antidepressant with a well-known ability to produce sedation [16]. Clarification of its efficacy as an augmentation therapy and in patients with refractory depression and its role in improving the efficacy and reducing the extrapyramidal effects of antipsychotic drugs would also help to establish its clinical value [4]. Low-dose mirtazapine as addon therapy has shown better efficacy, earlier onset of action and more number of responders and remitters as compared to conventional treatment in MDD in Indian patients [17]. Studies indicated that statistically significant and clinically relevant differences in favor of mirtazapine were evident on several outcome variables. Mirtazapine demonstrated an accelerated anxiolytic effect as shown by changes from baseline on the Hamilton Rating Scale for Anxiety [18].

BDNF, the most abundant of the neurotrophins in the brain, has been implicated in both major depression and cognitive function. Genetic association studies of the BDNF Val66Met polymorphism (rs6265) in geriatric depression have produced inconsistent results. Serum BDNF levels and BDNF Val66Met polymorphism are related to the mirtazapineresponse in MDD [19- 23]. Increasing evidence in the literature suggests a link between the brain-derived neurotrophic factor (BDNF) system and adult depression, supporting a role in the pathophysiology of the disease and response to therapy [24]. Clinical studies have indicated that serum or plasma BDNF levels are decreased in patients with untreated major depressive disorder (MDD), and that antidepressant treatment can restore the decreased BDNF level to the normal value [7, 25].

A few studies have reported BDNF serum levels in elderly depressed subjects and their relationship with antidepressant therapy. And low serum levels of BDNF are a state abnormality that is evident during depression and normalizes during remission [26]. BDNF had been a candidate molecule for influencing the clinical response to antidepressant treatment.