Serotonergic influence on the levels of prolactin in depressed females

The aim of this study was to evaluate the relationship of serotonin level after treatment with selective serotonin reuptake inhibitors in patients of unipolar depression and influence of serotonin on the secretion of prolactin. Twenty two depressed females of child bearing age, who had come for the first time in the Psychiatry Department were selected for this study. They were subjected to Hamilton rating scale and divided into mild, moderate and severe cases. Their urinary 5-hydroxy tryptamine (5-HT), 5-Hydroxy indole acetic acid (5-HIAA) and serum prolactin levels were estimated before and after 6 weeks of treatment with sero-tonin reuptake inhibitors. The treatment schedule decreased urinary 5-HIAA level signifi-cantly, but there was a non-significant increase in urinary 5-HT. There was also a slight in-crease in serum levels of prolactin. The results suggest that time period required for altera-tion in central neuronal serotonin may be longer than the duration of treatment with sero-tonin reuptake inhibitors.

Depression is a common illness, which affects 20% of all women in their life time. The prevalence among women of child bearing age is 10% , among pregnant women is 4-10% while during post partum it is found to be 10-28%.[1] Pregnancy and post partum depression seem to have biological roots within the rapidly shifting hormonal mileu. However, no evidence so far suggests that gonadal hormone, prolactin or thyroid hormone is in any way di-rectly linked to depression. Alteration in the serotonin metabolism seems to be an important factor in the etiol-ogy of depression. It has been shown that depletion of serotonin in certain areas of the brain has a great impact in contributing to depression [2,3,4,5]. It has been pro-posed that enhancement of central serotonergic transmis-sion may underlie the therapeutic response to different types of antidepressant drugs [6,7]. It has moreover been observed that serotonin has a stimulatory effect on the release of prolactin and serotonin depletion plays a role in pathogenesis of depression as drugs like selective sero-tonin reuptake inhibitors (SSRI’s) tend to cause a dra-matic improvement in patients with depression [7,8,9]. However, studies have not been conducted to identify the relationship between the levels of serotonin after treat-ment with SSRI’s in cases of depression and the changes in prolactin level. Present study was, therefore conducted to elucidate the relationship between the levels of sero-tonin before and after SSRI treatment in cases of depres-sion and its association with the secretion of prolactin.

Twenty two patients with depression were selected from the out patient Department of Psychiatry of J. N. Medical College, Aligarh Muslim University, Aligarh, on their first visit. Prior consent was taken from all the subjects.

The subjects were of child bearing age (18-45 years) and were diagnosed as depressives under the strict guidelines of DSM-IV criteria [10]. Blood samples and a 24-hour urine sample with 25 ml of glacial acetic acid as preserva-tive were collected from these subjects. The serum was separated by centrifuging the blood sample at 3000 rpm for 15 minutes and was stored at –20°C. The urine sam-ples were stored at 4°C. The pretreatment levels of urinary 5-HIAA, 5-HT and serum prolactin were estimated.

The patients were then advised to start the treatment with SSRI’s (Sertraline - 50-200 mg/day). The follow up sam-ples of the blood and urine were again collected after six weeks of treatment of SSRI’s . The levels of 5-HIAA and 5-HT of the patients were then estimated from the urine samples [11]. Serum prolactin level was estimated prior to the start of medication and then after 6 weeks of drug schedule by Enzyme linked immunosorbent assay [12]. Stastical analysis was done by Student’s t-test.

Twenty two depressed females were included in this study with a mean age of 28±4.0 years and median of 28 years. These patients were subjected to Hamilton rating scale for depression[10]. On the basis of these scores, 9 (41%) cases were diagnosed mild, 11 (50%) cases as moderate and 2 (9%) cases as severe depression.The levels of urinary 5-HT, 5-HIAA and serum prolactin were measured before treatment and the values were compared between the mild and moderate cases. The mean 5-HT was 9.0±2.32μmol/L. in mild cases of depres-sion and it was 8.0±1.56 μmol/L. in moderate cases and was not significantly different. The levels of 5HIAA in mild cases of depression were found to be 15.6±6.09 μmol/L .and 15.7±3.66 μmol/L in moderate cases, respe-ctively but was not significantly different. Serum con-centration of prolactin of the mild depressed cases was recorded to be 9.0±6.62 ng/mL and in moderate cases was 8.65±4.59 ng/mL, respectively. The values were not significantly different (Table-I). The levels of 5-HT, 5-HIAA in urine and serum prolactin were estimated after 6 weeks of treatment with SSRI’s in cases of mild and moderate depression (Table I). 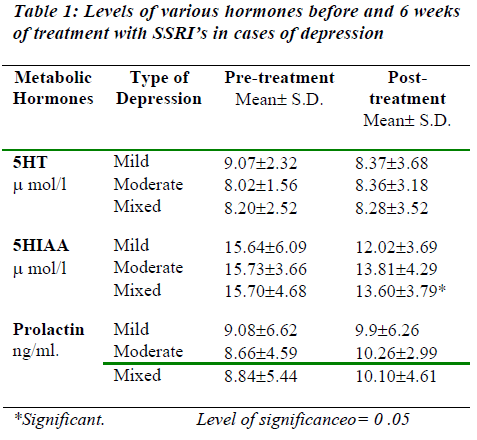 Table 1: Levels of various hormones before and 6 weeks of treatment with SSRI’s in cases of depression

In another study, patients of different severity were mixed and their pre and post-treatment 5-HT, 5-HIAA and se-rum prolactin levels were compared for significance. There was a significant decrease in concentration of 5-HIAA of the subjects treated with selective serotonin re-uptake inhibitors. Although there was a slight increase in 5-HT level in post- treatment group yet it was not found to be statistically significant. An increase in serum prolac-tin levels was observed after treatment with serotonin re-uptake inhibitors, but it was significant too (Figure I).

Fig. I. Comparison of pre-treatment and post- treatment levels of 5-HT, 5-HIAA and serum prolactin in mild, mod-erate and mixed cases of depression. * = Significant level of significance= 0.05

The present study included female patients of depression. They all were of childbearing age (18-45 years). The pa-tients were divided into groups according to the severity of depression, assessed by HAMD scores before starting the treatment [10]. The levels of urinary 5-HT, 5-HIAA and serum prolactin were measured and compared before the start of treatment and after 6 weeks of treatment. The pre- and post-treatment urinary 5-HT, 5HIAA and serum prolactin levels were compared for significance but none of the compared groups showed any significant differ-ence. The patients of different severity score were mixed and again the pre- and post-treatment urinary 5-HT, 5-HIAA and serum prolactin levels were compared for sig-nificance, as shown in Table I. It was, however, observed that there was a slight increase in urinary 5-HT level in post-treated patients as compared to untreated patients, yet it was non-significant (Figure-I). Evidences suggest that serotonin reuptake inhibitors reduce the Vmax of 5-HT uptake in the platelets as depicted by stain et al [13], therefore, the plasma 5-HT levels are expected to rise. Treatment of depressed patients with SSRI’s caused a marked decrease in platelet 5-HT uptake in studies made by Lawrence et al [14] and Bakish et al [15]. But in this study the increase in urinary 5-HT levels in post-treated patients is not significantly higher than in untreated pa-tients. An increase in 5-HT of 0.1% only over the pre-treatment group is inexplicable. As evidences regarding the time duration for increase in 5-HT levels either central or peripheral are lacking, it is possible that time period for alteration in central neuronal serotonin levels may be longer than the duration of SSRI treatment of 6 weeks. However, slight improvement in urinary 5-HT levels in-dicate the efficacy of drugs, also evident in the form of decrease in HAMD scores in these patients. Thus, the results of this study is in consonance with the findings of Sheline et al [16].

Further, a significant decrease in urinary 5-HIAA level was observed in post-treated patients. This could be due to pre-synaptic neuronal inhibition of serotonin uptake by these drugs resulting in an increased synaptic concentra-tion of serotonin, which permits increased activation of receptors and also prevent serotonin from being metabo-lized by MAO which results in decreased level of its me-tabolite, 5-HIAA in urine. This finding is also in conso-nance with the study made by Sheline et al [16].

A slight increase in the serum prolactin level was also observed in the post-treated groups with SSRI’s as com-pared to the untreated group. However, the increase was not statistically significant. Earlier studies by Meltzer et al [17] have clearly shown that antidepressants i.e., SSRI’s increases central serotonergic activity in patients by pre-synaptic mechanism which potentiates the secretion, so the findings of our study correspond with the findings made by Meltzer et al [17].

To conclude, the evidences regarding the time duration for significant change in 5-HT levels are lacking, so it is quite possible that time period required for significant alteration in central neuronal serotonin may be longer than the duration of SSRI treatment of 6 weeks. Morover, improvement in the depressive state of the patient but not the serotonergic status suggests that perhaps the duration of hyposerotonergic state is more important than the magnitude of decrease in serotonin levels.