Seroma management after an external dacryocystorhinostomy

Seroma is a fluid-filled pocket, which often develops after surgical procedures. Especially after abdominal, breast and aesthetic surgery. We present, to the best of our knowledge, the first reported seroma case occurring after an external Dacryocystorhinostomy (DCR). A 54-year-old, fit and well female patient presented with a fluctuant, well-defined fluid-filled mass in the medial canthus following an uneventful external DCR. Only a small amount of discomfort was reported. Clinically, a seroma was diagnosed. Conservative management was advised including a local message for a few weeks and keeping the head above the heart. After a couple of months, the size of the seroma was much reduced. Local massage 3-4 times a day for a few weeks and head above the heart was the initial recommended management. This was similar to the management of seroma occurring after aesthetic, abdominal or breast surgery.

A seroma can be defined as a local accumulation of clear fluid where the tissue has been disturbed, resulting in aesthetic deformity or compression to neighboring structures. They commonly occur after surgical procedures where surrounding tissue can be readily damaged. The most common include abdominoplasty, breast and facial aesthetic surgeries, especially rhinoplasty and rhytidectomy. Most of the seroma research comes from surgeries in these areas [1,2]. Reported incidences vary between 5%-50% [3]. A literature search did not show any previously reported seroma cases relating to an oculoplastic procedure. Here we present the first reported case of seroma developing after an external Dacryocystorhinostomy (DCR) to the best of our knowledge.

A 54-year old female presented with a painless, well-defined, fluctuant, fluid-filled mass, which had developed a few weeks after a straight forward, uncomplicated external DCR procedure. She initially presented to the oculoplastic outpatient clinic at Northampton General Hospital (NHS District General Hospital in the United Kingdom) with left eye epiphora requiring an external DCR due to left-sided nasolacrimal duct obstruction. On examination, there was a palpable red mass located in the left medial canthus area at the operated site (Figure 1). The patient did not report any bleeding or discharge from the area and there was no associated telangiectasia. The patient did, however, report a bit of discomfort but didn’ t require any pain relief. She was well in herself with no fevers and there were no signs of an abscess. Clinically a seroma was diagnosed. The DCR stents were removed as normal at routine follow-up. Conservative management was advised as the initial step, using local massage 3-4 times per day and keeping the head above the heart for as long as possible throughout the day. After a few weeks, the size of the seroma was reduced and appeared to be less frequent (Figure 2). The patient reported that she was applying coconut oil which she massaged once a night. After a 6-months, the seroma became un-noticeable and the surrounding skin erythema resolved (Figure 3). 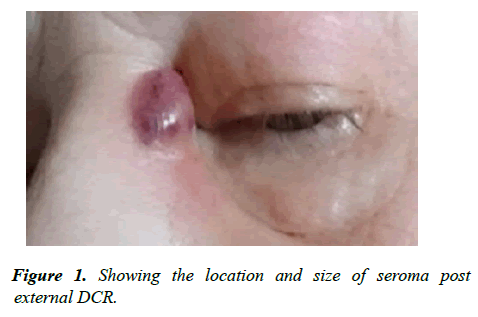 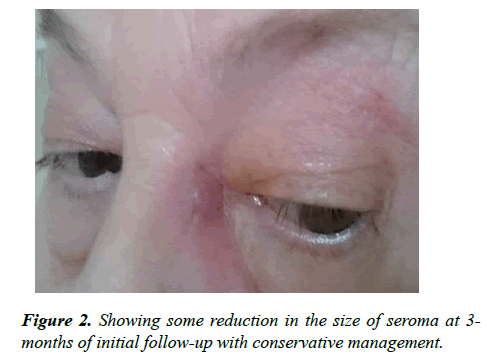 Figure 2: Showing some reduction in the size of seroma at 3- months of initial follow-up with conservative management. 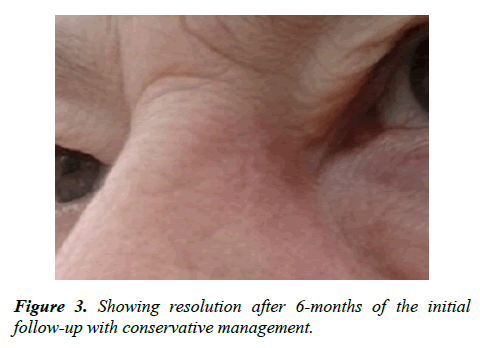 Figure 3: Showing resolution after 6-months of the initial follow-up with conservative management.

To the best of our knowledge, we present the first reported seroma case following an external DCR procedure. An endoscopic or an external DCR is usually indicated where there is an epiphora secondary to nasolacrimal duct obstruction. It is carried out under local or general anesthesia usually, as a day procedure and involves creating an alternative pathway of low-resistance so that tears can easily drain. Ethmoidectomy is performed and subsequently, the lacrimal sac is incorporated with the lateral nasal mucosa. This allows a pathway that bypasses the nasolacrimal duct obstruction. A temporary stent is inserted at the time of the DCR to prevent blockage during the healing process of the newly created pathway but this is usually removed in a clinic setting 6 weeks after surgery. Some complications include bleeding, bruising and failure of the procedure. In the current case, a seroma was noticed at the initial follow-up.

Seromas can commonly arise after surgical procedures due to trauma of the surrounding tissue. They are initially noticed in the second postoperative week in abdominoplasty and aesthetic surgery. This is comparable to our case following an uneventful external DCR. Unfortunately, they can cause discomfort and underlying infection and abscess which may need multiple incisions and drainage if re-occurring. Therefore, preventing and management of seromas has been a topic of interest.

Literature relating to seroma mainly comes from head and neck, abdominal and groin surgery [4]. It is also noticed that one of the important risk factors for seroma is weighed of skin which is excised at the time of surgery [5]. This may explain why seromas are not commonly seen after a DCR. Since head and neck surgery is the closest relation to our case, this will be the focus of our discussion.

In terms of prevention, one retrospective review of 222 facelift surgeries demonstrated that using an intra-wound vacuum drain for the first 24 hours after surgery helped significantly to decrease the rate of seroma [6]. A drain would not be a feasible option for a DCR due to the anatomical position and connection to air. Furthermore, due to the nasolacrimal stents and location, space is very limited and it is an added source of infection and would cause scarring resulting in poor aesthetics outcomes.

In rhytidectomy procedures, Fibrin sealants show to significantly reduce the risk of seromas by enhancing the adherence of tissue to the wound bed [7]. Thus, potentially minimizing the dead space under the skin where fluid can accumulate [8]. After abdominoplasty, patients are advised to lie flat during the post-operative period to prevent gravity pooling any fluid to the area [3].

Furthermore, quilting sutures have been suggested in closure for abdominoplasty procedures. It involves taking bites which include muscular fascia below and the superficial fascia of the skin flap above, to reduce the incidence of seromas. However, the latter may be difficult to apply in the medial canthus region as there is a high risk of scarring, making the result less aesthetically appealing especially from its anatomical region. Also, due to the lack of subcutaneous fat in the medial canthus region, quilt suture would not be very easy.

Usually conservative watch and wait and to reduce the blood flow to the area. In a case report of bilateral auricular seroma, one side resolved with conservative means but the other side required incision and drainage [9]. Other methods for seroma suggested is aspiration and contour dressing with Plater of Paris in auricular seromas [10]. Sclerotherapy has also shown good evidence to help manage seromas. It involves filling the seroma cavity with an irritant and works by inducing a fibrotic response to seal the dead space and tissue adhesion. The substances used for sclerotherapy are Ethanol, polidocanol, talc, and doxycycline. Some authors suggest using incision and drainage with subsequent compression and antibiotic cover [9]. However, there is no concrete evidence that these techniques are safe to use in close proximity to the eye.

To the best of our knowledge, there have not been any previously reported cases of seroma developing after an oculoplastic procedure. To prevent seroma post-external DCR we recommend to use tight padding around the eye after surgery and start massage as soon as possible for example at 10 days post-op. We recommend that the initial management for seroma developing post-external DCR to be conservative initially; with gentle massage or compression and lying upright position to help. If after several months this does not resolve, incision and drainage with subsequent compression may be considered.

• Massage soon after surgery, at 10 days

• Head above the heart for 2 weeks

• No conflicts of interest reported by any of the authors

• No funding disclosures by any of the authors 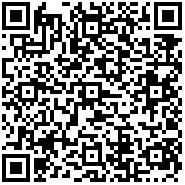