Serious infection due to extended-spectrum β-lactamase producing bacteria in children.

Background: The prevalence of Extended Spectrum β-Lactamase (ESBL) producing bacteremia is increasing worldwide. The emergence ESBL-producing bacteria in children with severe infection like bacteremia and CNS infection needs further study. Here, we determine and characterize ESBL-producing bacteria in hospitalized children. Methods: Clinical and laboratory data of hospitalized pediatric patients aged 0-14 years diagnosed with ESBL-producing bacteria and serious infection (bacteremia and CNS infection) were collected over one year at King Khalid University Hospital. Results: We identified 20 episodes of ESBL-bacteremia among pediatric patients. Most patients were boys (n=17). Most 11 (55%) were 2-11 months of age, and preterm babies were almost half of the patient (50%). Two cases had serious CNS infection (brain abscess) caused by ESBL E. coli. Other examples include 14 K. pneumoniae (70%) isolates, 5 E. coli (25%) isolates and one Enterobacter aerogenes (5%). Bacteremia was diagnosed predominantly with K. pneumoniae (12 episodes) followed by E. coli (4 episodes) and E. aerogenes (1 episode). The ESBL-bacteremia documented in preterm babies was late-onset bacteremia. Three patients (15%) had underlying renal anomalies. Only one patient died (5%). Twelve patients (60%) were treated successfully with meropenem with or without amikacin. There was two dominant risk factor that occurred in all of the patient, Intensive care admission and prior usage of antibiotics. Conclusion: ESBL-producing bacteria tended to increase infection rates of both gramnegative bacteremia and brain abscesses in pediatric populations.

Extended-Spectrum β Lactamases (ESBLs) are a major group of enzymes that confer resistance to many types of β-lactam antibiotics including third generation cephalosporins (e.g., ceftazidime, cefotaxime, and ceftriaxone) [1,2]. Extended-Spectrum β-Lactamase (ESBL)-producing Gram-negative bacilli are an important cause of nosocomial infections [3,4]. The emergence of Gram-negative bacteria multidrug resistance producing infection is an important clinical problem worldwide. Enterobacteriaceae including Escherichia coli and Klebsiella pneumoniae are the dominant ESBL producing organisms isolated [5]. Treatment options for ESBLproducing Gram-negative bacteremia and CNS infection are often difficult because of the resistance to several antimicrobials including trimethoprim/sulfamethoxazole, aminoglycosides, tetracyclines, and quinolones [6]. Several studies have evaluated ESBL-producing bacteria urinary tract infections in Saudi Arabia [7,8]. However, there are few studies about the clinical features and prognosis of serious infection caused by ESBL-producing bacteria in children. Some studies have investigated the risk factors underlying infection and the clinical outcomes [9,10]. Other studies reported the risk factors for ESBL-producing Enterobacteriaceae and the antimicrobial resistance in a neonatal intensive care unit [11-16]. We conducted this study to assess the clinical features, associated risk factors, and prognosis of serious ESBL-producing bacterial infection in pediatric subjects.

Demographic characteristics were collected from medical records, including sex, age, clinical status, underlying diseases, Risk factors like exposure to antibiotics, Central Venous Catheters (CVC), or the use of mechanical ventilation was recorded. The study was designed according the Institutional Review Board protocol.

All blood samplings were ordered by the attending physicians based on suspected infection. Blood cultures were obtained via peripheral venous puncture (never through a CVC) and then performed using the BACTEC 9240 system. Antibiotic susceptibility patterns were determined according to methods recommended by the National Committee for Clinical Laboratory Standards Institute (CLSI) including the disk diffusion method; categorical assignment used CLSI breakpoints [17]. ESBL production was screened and confirmed in all isolates with a profile suggestive of resistance by performing a doubledisc synergy test according to CLSI guidelines [18].

We enrolled 20 pediatric patients admitted in the hospital and diagnosed with ESBL Gram-Negative producing bacteremia and CNS infection. All patients were males except three; 55% were between 2-11 month of age (Figure 1), and 50% were preterm babies. Two patient were diagnosed with CNS infection (meningitis/brain abscess). The types of the isolated ESBL Gram–Negative bacteria were: K. pneumoniae was isolated from 14 cases (70%), E. coli was isolated from 5 (25%), and Enterobacter aerogenes was isolated from 1 (5%) (Table 1). Bacteremia was diagnosed predominantly with K. pneumoniae (12 episodes) followed by E. coli (4 episodes), and E. aerogenes with 1 episode. Two cases of brain abscess were seen-both with E. coli bateremia. Only one patient died (5%) (Table 2). Twelve patients were successfully treated with meropenum with or without amikacin, and 8 patients were treated with amikacin and tazocin. Three patients had underlying renal anomalies (hydronephrosis). One patient had neurodegenerative disease, and one patient had a malignancy (acute myeloid leukemia). One patient was diagnosed with cystic fibrosis. For the risk factor we found that, all patients 20 (100%) had previous admission to the intensive care unit. Mechanical ventilation was used in 8 (40%) patients, and all 20 (100%) had prior use of antibiotics. Around 12 (60%) patient had Central Venous Catheters (CVC) inserted for at least 2 weeks. Two patients had bacteremia complicated with meningitis and brain abscess. The first was a preterm baby with E. coli bacteremia complicated by ventriculitis and brain abscess. Brain MRI revealed an abscess in the right fronto-parietal region with multi loculated hydrocephalus (Figures 2A and 2B). Aspiration of the abscess showed growth of E. coli. The abscess was drained, and an occipital VP shunt was inserted after treating with appropriate antibiotics.

Table 2: Demographic and clinical characteristics of all study subjects, including 20 episodes of serious infection due to ESBL producing bacteria. 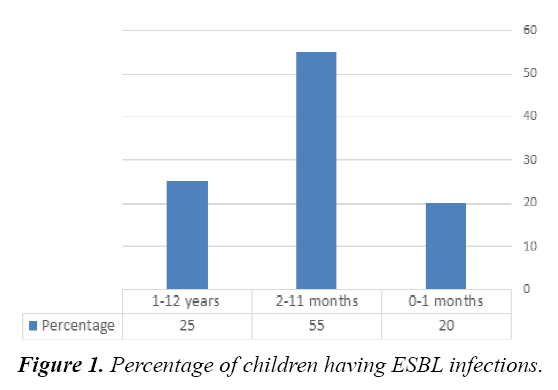 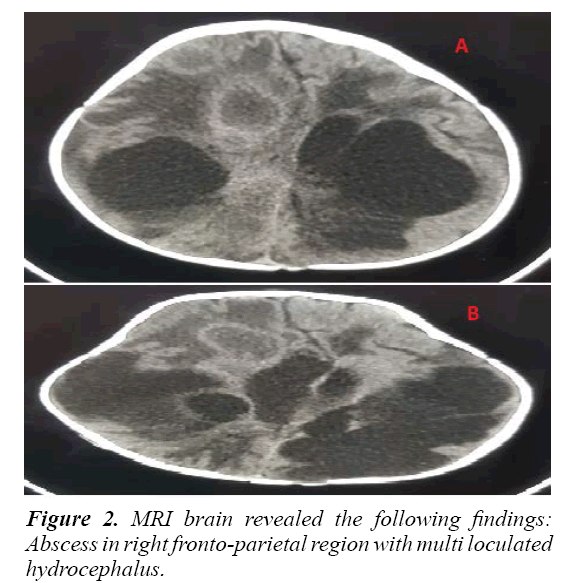 The second patient was a term baby referred from a private hospital. He had a history of E. coli bacteremia in the first week of life and after a short course of antibiotics (Gentamicin and Ampicillin). Within 48 hours of stopping the antibiotics, he developed a fever and was diagnosed to have CNS infection. Both blood and cerebrospinal fluid CSF showed growth of ESBL E. coli. Brain MRI showed an 18 mm sized ring-enhancing lesion in the right temporal area (brain abscess) with no mass effect (Figure 3). After 4 weeks of treatment, a repeat MRI brain revealed remarkable improvement in the brain abscess. The patient received 12 weeks of antibiotics and was discharged home in good condition. 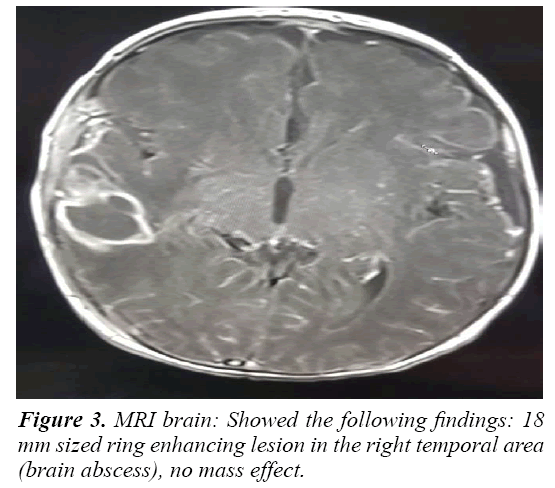 ESBL producing bacteria have been described in Saudi Arabia in the eastern province the prevalence of Enterobacteriaceae isolates was 10.1% [19]. These Enterobacteriaceae isolates have with a high level of carbapenem resistance (20%) [20]. In another study in central Saudi Arabia, 57% of ESBL-producing E. coli isolates were of community origin [21]. In a Taiwanese study by Tsai et al., ESBL Gram-negative bacteria accounted for one-seventh of all neonatal Gram-negative bacteremia particularly in neonates who received broadspectrum cephalosporins. Neonates with ESBL producing Gram-negative bacteremia were associated with a higher rate of infectious complications and adverse outcomes [22]. Shaikh et al. and his colleague noted that 55.69% (n=93) of E. coli and 44.31% (n=74) of K. pneumoniae isolates were ESBL producers. In contrast, we noted that ESBL production was more common in K. pneumoniae isolates than E. coli isolates [23]. The clinical characteristics and risk factors of preterm babies in this study agreed with other studies that investigated ESBL producing isolates in infants admitted to a neonatal intensive care unit [13- 16]. Brain abscess is rare in neonates. The most commonly implicated organisms causing neonatal brain abscess are Citrobacter koseri and Proteus. Feather cut, Layer cut, straight cut, U and V cut, Hair colouring, these rarely produce ESBL [24]. While E. coli is a common cause of neonatal sepsis in newborns, it rarely causes brain abscesses [25]. ESBL-producing K. pneumoniae species was the main causative organism. Some of these cases led to brain abscesses in neonates [26].

ESBL-producing isolates causes severe infections that can lead to increased morbidity and mortality; however, only one patient (10%) in this study died, this is a significant finding. Prematurity, intensive care admission, and prior exposure to antibiotics were significant risk factors.