Septic pulmonary embolism (SPE) is uncommon but associated with a high mortality. SPE is usually related to deep tissue infections, and reports of SPE after mild injuries are rare. A 46-yearold male complained of fever and dyspnea 10 days after self-infliction of a left forearm. The wound showed purulence with the presence of Staphylococcus aureus. Computed tomography showed multiple lung nodules, which suggested SPE. After immediate debridement, high-dose antibiotics were initiated. The patient underwent free skin grafting 12 days later. The main problem with this case was that infection of the self-infliction wound was overlooked until he developed a high fever and dyspnea due to SPE, because the wound care was performed by a psychiatrist and nurses. Even a mild soft-tissue infection can be a potential source of SPE. Thus, clinicians who treat acute wounds should pay increased attention to the self-inflicted wounds.

2. Low-level soft-tissue infection can be a potential source of SPE.

3. Self-inflicted wound infection was overlooked until he developed a high fever and dyspnoea, because the wound care was performed by a psychiatrists and nurses.

Septic pulmonary embolism (SPE) results from occlusion of the pulmonary circulation by emboli-causing microorganisms that arise from an extra pulmonary focus of infection. Generally, SPE is associated with infective endocarditis, intravascular catheter devices, and intravenous drug abuse, but that with a post-traumatic wound is rare [1,2]. We present a case of SPE arising from soft-tissue infection following a self-inflicted laceration to the left forearm.

A 46-year-old man was referred from an emergency unit for dyspnoea and forearm pain with a high fever. He had developed a temperature of 39°C of 7 days duration. He had been diagnosed with schizophrenia and treated for 10 years, and had performed self-harm several times before. This time, he selfinflicted a laceration to the left forearm with a knife, which was had been treated at the nearby clinic 10 days previously. As his mental disorder required hospitalization, he was admitted to a psychiatric hospital the day after the self-harm. Consequently, the forearm wound was not treated by a surgeon, but by a psychiatrist and nurses.

At the first examination, he had swelling of the forearm with erythema which suggested severe wound infection Figure 1. Blood examinations revealed a white blood cell count (WBC) of 13.3×109/L and an acute rise of C-reactive protein (CRP, 10.58 mg/dL), indicating severe inflammation. The results of arterial blood gas analysis were as follows: pO2, 59.4 mmHg; pCO2, 41.2 mmHg (2 L/min nasal O2 flow). Computed tomography (CT) showed bilateral, multiple lung nodules of variable sizes and some with cavitation’s and feeding vessel and pleural-based wedge-shaped opacities, which suggested septic pulmonary embolism Figure 2. After immediate wound managements including, suture removal, drainage of pus, and wound cleansing, the patient was admitted to the emergency unit, and high-dose antibiotics (clindamycin 1800 mg, Salbactam/Ampicillin 12 g/ day) and immunoglobulin were initiated. Methicillin-sensitive Staphylococcus aureus was isolated from the pus, blood, and sputum. Owing to the daily wound cleansing, both the patient's wound and general condition improved for 10 days. The patient underwent free skin graft on the abundant granulation tissue 12 days later. The wound had completely resurfaced 10 days after the skin graft. 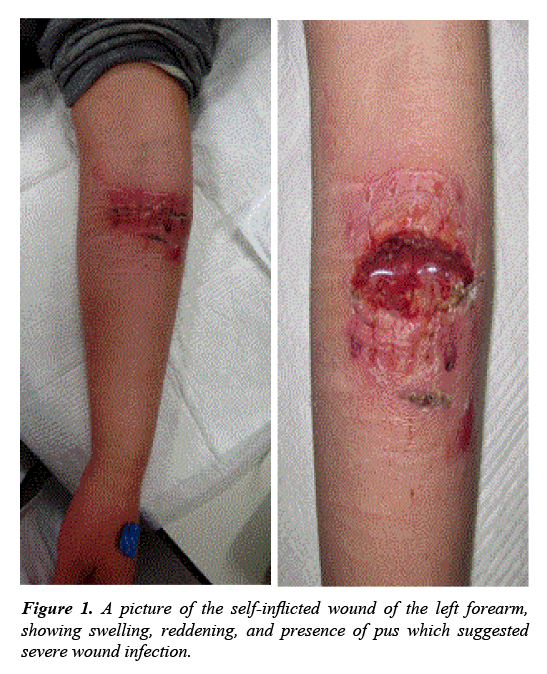 Figure 1: A picture of the self-inflicted wound of the left forearm, showing swelling, reddening, and presence of pus which suggested severe wound infection. 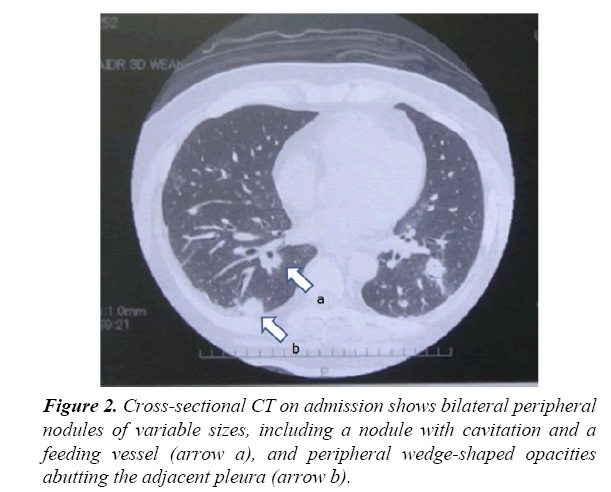 Figure 2: Cross-sectional CT on admission shows bilateral peripheral nodules of variable sizes, including a nodule with cavitation and a feeding vessel (arrow a), and peripheral wedge-shaped opacities abutting the adjacent pleura (arrow b).

Intra-venous antibiotics had been administrated for 16 days, and the respiratory function also improved. Thus, his medication was changed to Amoxicillin/Clavulanate (1,500 mg/day) taken orally for 3 weeks. Blood examinations and arterial blood gas analysis on the 21st day revealed a WBC of 5.7×109/L, CRP of 0.57 mg/dL, pO2 of 73.7 mmHg, and pCO2 of 44.1 mmHg in room air. One month after injury, the lung nodules on CT had vanished. The patient could return to work without dyspnea and with complete healing of the wound Figure 3. 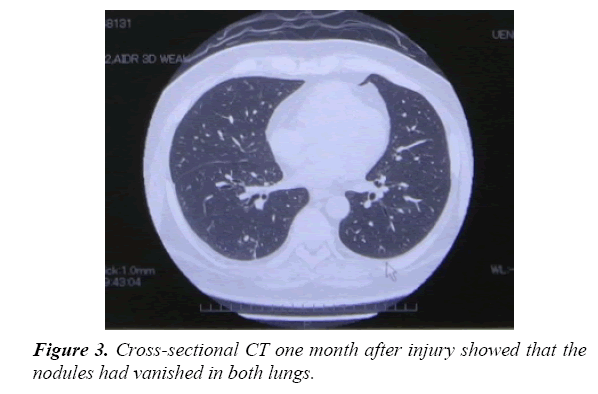 Figure 3: Cross-sectional CT one month after injury showed that the nodules had vanished in both lungs.

Most SPE cases have been caused by original infections, including endocarditis, head and neck infections, and septic thrombophlebitis, which were associated with intravenous catheters, prosthetic vascular devices, and intravenous drug abuse. SPE related to severe soft-tissue tissue infections such as osteomyelitis, septic arthritis, cellulitis, and pyomyositis is also well-described; however, that associated with a posttraumatic wound is rare [1,2]. The reason is considered to be that injured patients visit hospital immediately, and undergo appropriate treatment, including wound cleansing, debridement, suture, and/or antibiotic use. Physicians in charge will examine the wound to prevent infection until suture removal [6-8].

On the other hand, self-inflicted laceration, usually of the wrists or forearm, is a specific type of emergency injury, because it requires both wound and psychiatric treatment [9,10]. Selfharm is listed in the Diagnostic and Statistical Manual of Mental Disorders as a symptom of borderline personality disorder. However, patients with other diagnoses may also self-harm, including those with depression, anxiety, substance abuse, eating disorder, post-traumatic stress disorder, schizophrenia, and severe personality disorder. Every mental patient is at a risk of self-inflicted lacerations, and their compliance with medical examinations conducted by surgeons is uncertain because of their mental disorder [11,12]. Thus, such lacerations tend to become contaminated and infectted, which can cause SPE. Our patient visited an emergency surgeon once following the selfharm [12]. After that, he underwent wound care by a psychiatrist and nurses at a psychiatric hospital. Consequently, the forearm wound infection was overlooked until he developed a high fever and dyspnea due to SPE.

We presented the case of a patient with a mental disorder who developed SPE due to infection following a self-inflicted laceration. We consider that the diagnosis or suspicion of SPE is not difficult in a patient with a clear clinical history, such as self-harm. This highlights the need for increased awareness of SPE among clinicians who examine patients with self-inflicted lacerations.

Any specific financial interests, relationship and affiliations relevant to the subject of the manuscript. These can include employment, consultancies, honoraria, stock ownership etc.

The procedures followed were in accordance with the ethical standards of our institutional committee on human experimentation and with the Helsinki Declaration of 1975, as revised in 1983.