Image processing considers as powerful tool in recognition of heart tissues in nuclear medicine investigations that increase the percentage and amount of tissues detected. K-means gathering and colour analysis techniques were used in this study. The images treated using MatLab program. Firstly, the images were changed to colour rich space format. Then each pixel in the image was characterized using color analysis algorithms. Then the segment heart tissues were displayed in colour form in discrete new image. The quantitative analysis had done using both precision and recall computation. The results were 99.3+4.57. This method presented capacities cumulative of recognition of the heart tissue with high precision rate.

Nuclear medicine imaging is accomplished to evaluate heart physiology and pathology. SPECT methods preponderate compared with other scanning procedures like cardiac computerized tomography. Recently, in developed countries, heart tissue scanning is commonest modality to evaluate certain hearts disorders [1,2]. The assessment is focused mainly on heart tissues using ERNA. The myocardial scanning is performed to hazard valuation in patients with heart insufficiency. Recognition of CAD is grounded on the heterogeneity in blood flow between a normal coronary vessel and one with an anatomic stenosis or abnormal physiological function [3]. Recognition of CAD depends on the dissimilarity in blood circulation [4,5]. In blood Vessels with a serious obstruction is known as one of the most dominant luminal sectional constricting many actions might happen [6]. The most severe obstructions, >85%, naturally have no blood movement replacement [7]. Many radioisotopes administrated into body in order to cardiac muscles scanning. The most severe obstructions, >85%, naturally have no blood movement replacement [7]. The available Tc-99m radiopharmaceuticals used for cardiac muscles imaging. Tc-99m and Tl-201 tracers were established. The available Tc-99m radiopharmaceuticals used for cardiac muscles imaging [8]. Tc-99m is better in imaging due to the quality and scattering [8]. In the last several decades, medical imaging systems have advanced in a dynamic progress. There are many advance technologies, which introduce to the medical imaging systems [9,10]. These technologies help in development of image features such as image quality and gaining [11,12]. The quality of attended images is tainted many factors, such as inherent and extrinsic three-dimensional resolution of the nuclear medicine machines.

These features result in indistinct and noisy pictures. The blurred images present artefacts that may principal to misdiagnosis. These images use to increase a diagnostic value for the physician, it is obligatory to monitor exact sequences of dispensation [13].

The 2D cardiac scintographs data obtained from the SPECT. Those images were saved as JPEG image format with high dpi percentage to sanctuary the quality of the image. For recognition of heart tissues, I must segment the heart borders.

The coronary tissues must segment in such a proper way. The image is viewing the heart tissues along with the other parts of the chest as background uptakes. Since, I was interested in the heart tissues solitary, so additional areas inside the image are considered as noise for me and so must be filtered so that I can segment the heart tissues and apply processing to detect the borders. I applied K-means grouping and colour analysis techniques to enhance the cardiac images. The steps of segmentation were shown in the Figure 1. 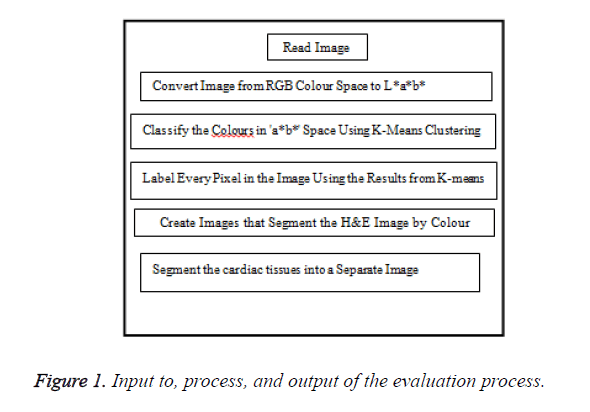 Figure 1. Input to, process, and output of the evaluation process.

It is a segregating technique. The role of k-means is divide data into k equally high-class clusters, and revenues the directory of the cluster to which it has allocated respectively remark. K-means works on definite comments and generates a solitary level of groups. The details of the minimization could be controlled using several elective input factors to k-means, counting ones for the preliminary values of the middle clusters, and for the extreme amount of repetitions. The k-means process showed in the following formula:

is the Euclidean distance between xi and vj.

‘ci’ is the number of data points in ith group.

‘c’ is the amount of group middles.

In this study firstly, the cardiac images was treated using MatLab program. The coloured image used in nuclear cardiology because its capability to differentiate the different tissue types easily.

Numerous colours can notice in the cardiac image if one disregards differences in intensity. The CIE L*a*b* permits to count the graphic variances. The L*a*b* colour space is derivative from the CIE XYZ. Altogether colour statistics is in the 'a*' and 'b*' layers. The variance among 2 colours was calculated by the Euclidean metric.

In this study, the colour cardiac image were converted to L*a*b* colour scale using forward transformation algorithm. The RGB values need to be distorted to exact total colour, such as sRGB.

Where Xn, Yn, and Zn are the tristiulus values. The separation of the f function divide in 2 areas which completed to avoid an immeasurable gradient at t=0 was assumed to be straight underneath approximately t=t0, and was assumed to equal the t1/3 portion of the function at t0 in both value and slope.

Steps of the segmentation 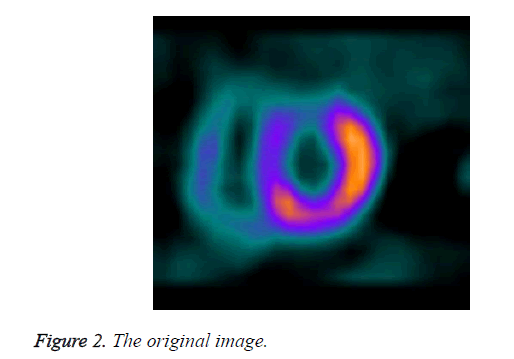 In this step, the image change using makes form and applies for algorithm (Figure 3). 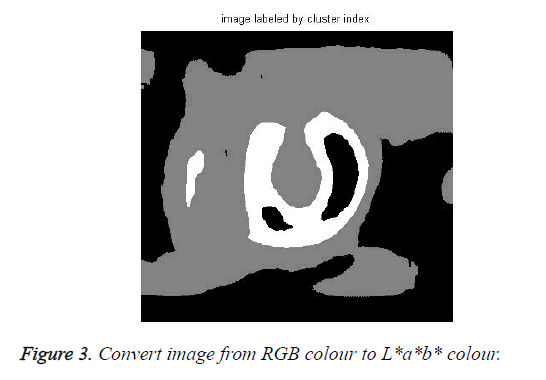 Subsequently, the colour data occurs in the ‘a*b*’ space, the images are pixels with ‘a*’ and ‘b*’ values. K-means used to group the images into three groups using the Euclidean distance metric.

Step 4: Tag each pixel in the image

In this stage, each pixel in the image was labelled using their clusters directory.

Step 5: Subdivision the image by Colour.

The cardiac tissue separate into three images using pixel label, which were shown in Figures 4-6. 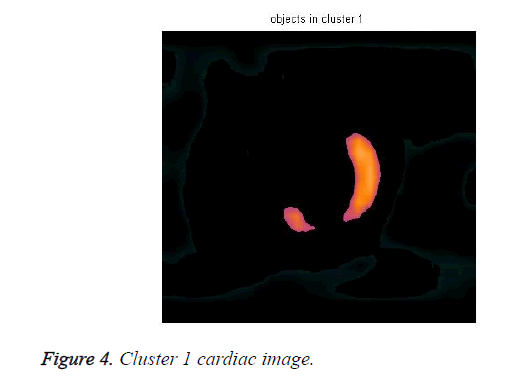 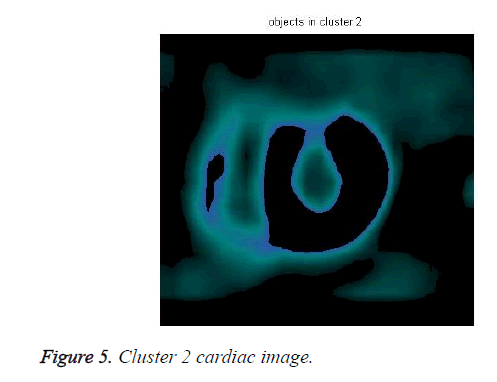 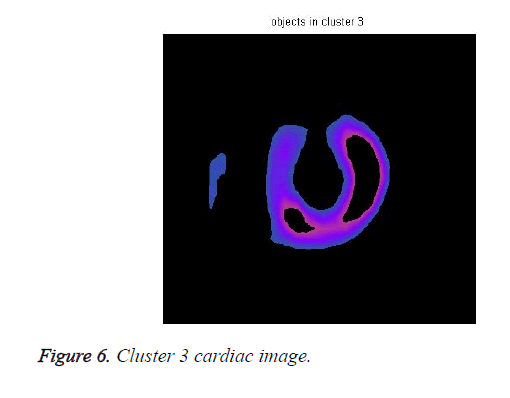 Step 6: Segment the result into a distinct image. 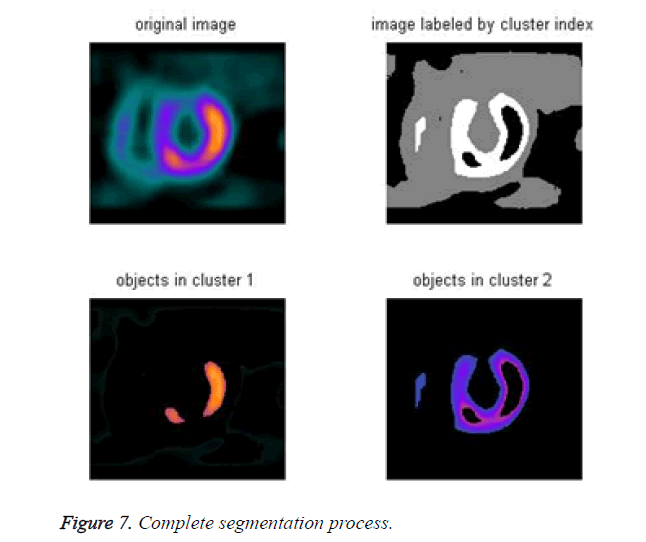 Segmentation used to identify the object of image that we are interested. The nuclear cardiology has become a common way to study myocardial disorders. Most images that created cardiac images were not completely clear and some contain Signal Noise Ratio (SNR), which affected myocardial borders detection. The result of tissue recognition matches the initial in-memory outcome comparing with others studies using different segmentation techniques comparing with other scientifical results [14-30].

The authors are thankful to the Deanship of Scientific Research, at Majmaah University for funding this research.