Segmental Arterial Mediolysis (SAM) was first described by Slavin and Gonzalez-Vitale in 1976 [1]. This rare noninflammatory/nonatherosclerotic arterial vasculopathy has no defined etiology nor standardized treatment and can involve visceral, cervical and cranial vessels. SAM related arterial dissections, occlusions, stenoses and aneurysms often result in organ ischemia or vessel rupture. While some cases are self-limiting, others require exo-and/or endovascular interventions.

A 30-year-old white female with a history of anorexia, depression and anxiety presented to the ER approximately 12 hours after suffering several suicidal, self-inflicted, penetrating knife stab wounds to the left side of her neck. Physical examination revealed entrance wounds with no significant external bleeding. Neurologic examination was notable for a left Horner’s syndrome. 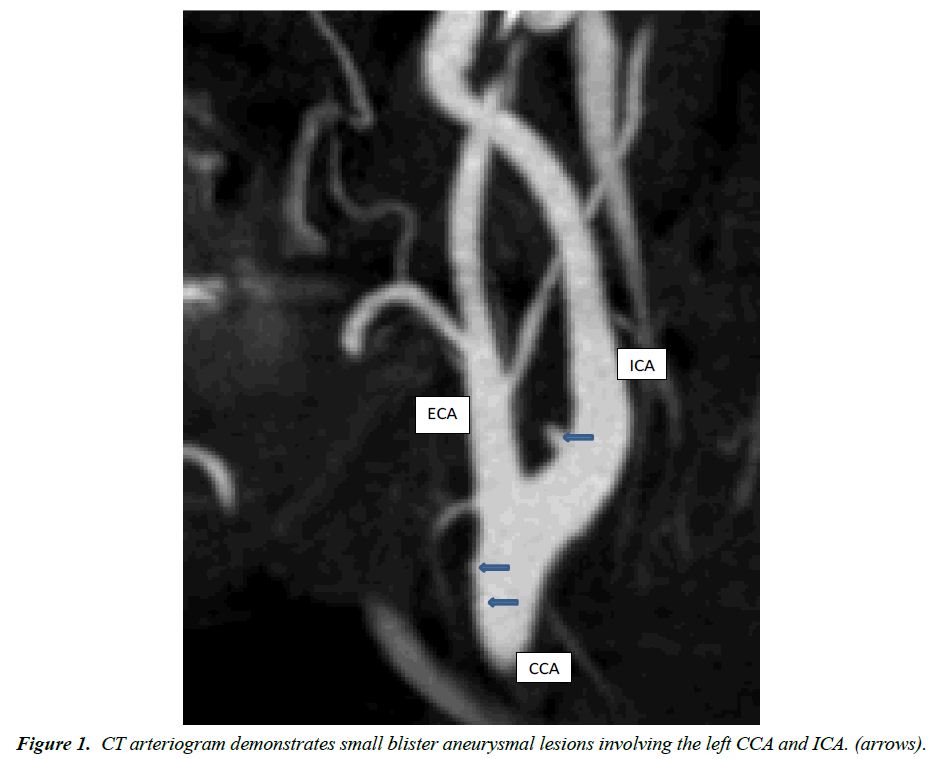 Subsequent cervical and cerebral catheter-based arteriography was performed approximately 24 hours after injury. These studies demonstrated numerous (>6) small (1-2 mm) blister like aneurysms arising from the walls of the left CCA and ICA (Figure 2). The lesions were distributed along the circumference of the vessels and had non-uniform geometries. No extravasation of contrast was identified from the CCA, ICA and ECA and no intimal flaps were visualized. The distal ICA and intracranial vessels opacified normally and contrast transit time was normal. 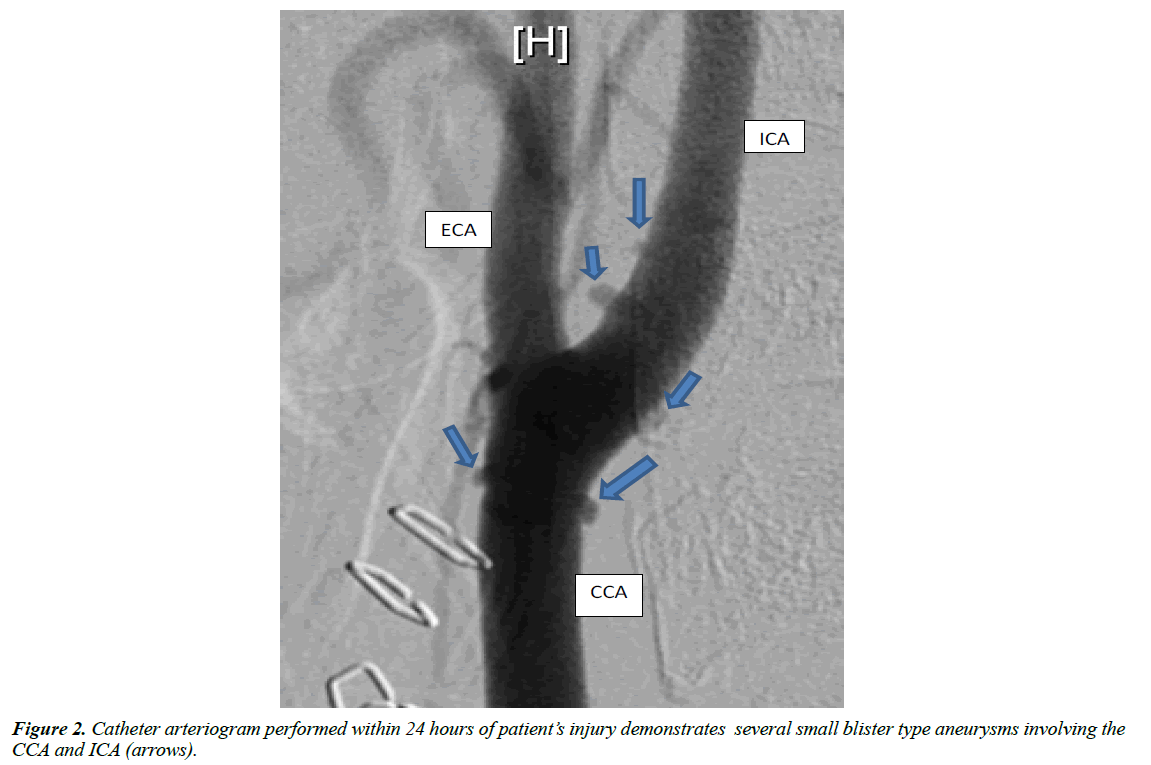 Based on imaging characteristics, the patient was presumptively diagnosed with SAM and managed with blood pressure control and hydration along with supportive medical and psychiatric interventions. Seven days later a repeat catheter based cervical and cerebral arteriogram was performed (Figure 3). This study continued to demonstrate the arterial blister aneurysms, at least one of which had possibly increased in size. 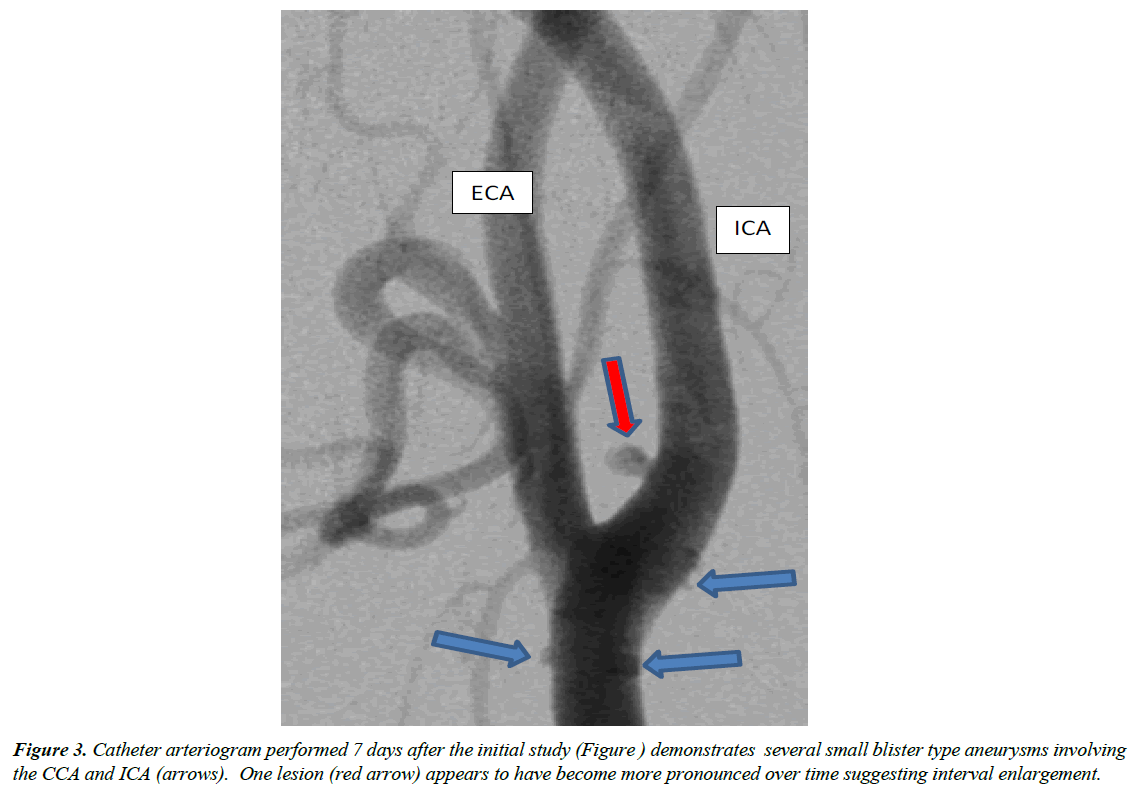 Based upon the above findings, contemplated interventions included the following: (1) medical management and followup imaging; (2) carotid stenting with overlapping open celled stents and (3) carotid stenting with a covered stent. The latter two options would have been accompanied by at least 6 months of aspirin and secondary platelet inhibitor (Clopidogrel or Ticagrelor) administration to reduce the risk of in stent thrombosis, intimal hyperplasia, and/or distal cerebral thrombus embolization and stroke. However, due to the patient’s continuing suicidal ideation and her underlying eating disorder, there was concern that she would either fail to take these medications or use them to further injure herself. Stenting without subsequent antiplatelets was not a considered option. For these reasons, the decision was made to delay interventional treatment until the patient was emotionally stabilized. She was ultimately discharged from the hospital and scheduled for follow-up evaluations as an outpatient.

According to Basso, SAM vasculopathy is characterized by a lytic process within the arterial wall’s tunica media which is initiated by the development of interconnecting vacuoles in the smooth muscle cells and is completed by their disruption and consequent cellular membrane rupture and accumulation of cysts in the medial extracellular space. SAM affects vessels in a discontinuous irregular pattern and generally involves only a portion of the circumference of the arterial wall [2].

Since first being described by Slavin and Gonzalez-Vitale in 1976, SAM has been reported in a variety of papers and is judged to have a United States incidence of approximately 1 in 100,000 [3]. While SAM most commonly involves visceral vasculature, it can involve the cervical circulation [4-8]. SAM is defined by Shenouda and Naidu as a non atherosclerotic, non inflammatory vasculopathy of unknown etiology that is characterized by lysis of the medial layer of the arterial wall, often resulting in dissection (61%), aneurysm (76%), arterial rupture (45%) occlusion (17%), stenosis (19%), string of beads (15%), thrombosis (15%), pseudoaneurysm (12%) and wall thickening (8%) [6,9].

Emergent presentation related to arterial rupture and peritoneal/retroperitoneal hemorrhage may occur in 66% of patient with a mortality rate of up to 50% [5]. Skeik reported presentation with abdominal hemorrhage in 50% of his 143 patients [2]. Non-hemorrhagic presenting signs and symptoms may include stroke/transient ischemic event (12%) abdominal pain (80%), and nausea/emesis (16%) [3].

SAM’s etiology is uncertain, however, many clinicians feel one of the disease’s precursors may be vasospasm due to inappropriate arterial vasoconstrictive response to vasomotor stimuli [2,10-12]. Such vasoconstriction is mediated by the vasa vasorum’s autonomic sympathetic innervation [13]. This theory is supported by the fact that the outer medial layer of large muscular arteries receives its blood supply from the vasa vasorum [13] and segmentally distributed vacuoles often develop in arterial smooth muscle as a result a vasospasm [10].

It is our contention that this patient’s self-inflicted stab wound to the left side of her neck traumatized the sympathetic chain (as supported by her subsequent Horner’s Syndrome). This neural structure is located posteromedial to the carotid sheath and just anterior to the Longus colli muscles. (Figure 4). Traumatic injury to the sympathetic system may have created a transitory increase in sympathetic tone and resultant vasoconstriction of the tunica media’s vasa vasorum thus suddenly and drastically impeding blood supply to the left CCA/ICA medial layer. This reduction in blood supply in turn could cause medial necrosis, segmental weakening of the blood vessel wall, and the ultimate development of the multiple small arterial pseudoaneurysms seen on CTA and catheter angiography. 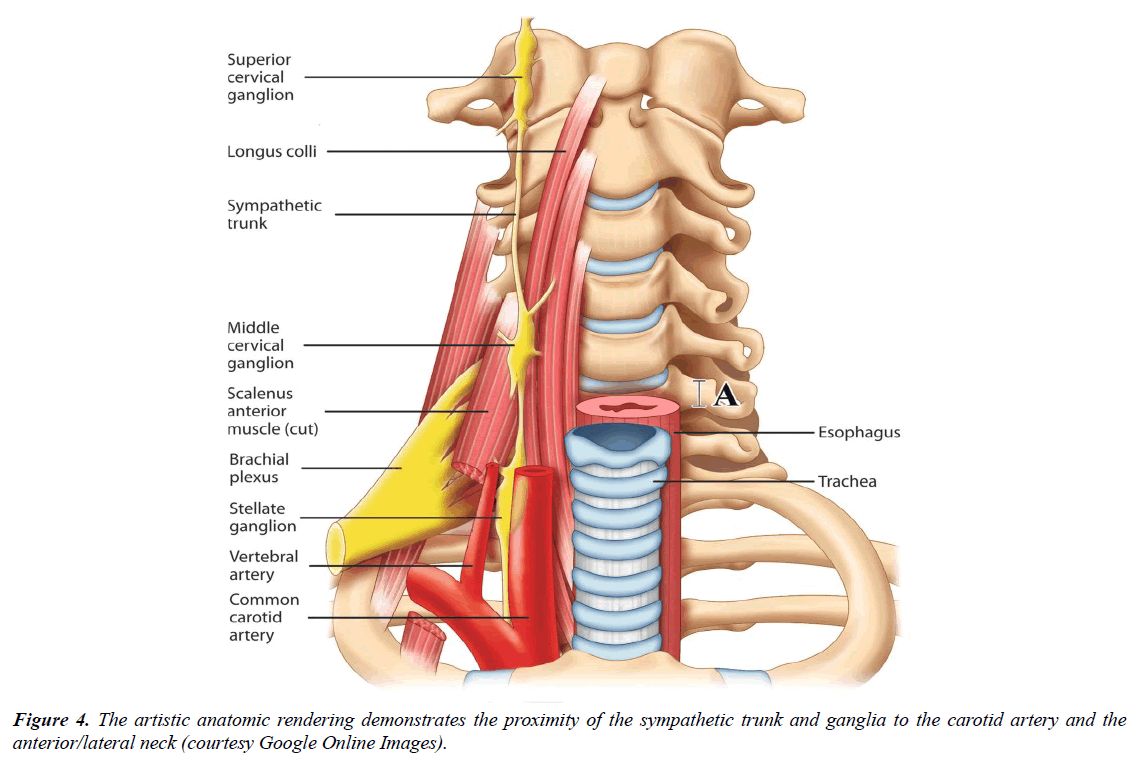 Figure 4: The artistic anatomic rendering demonstrates the proximity of the sympathetic trunk and ganglia to the carotid artery and the anterior/lateral neck (courtesy Google Online Images).

SAM is a rare disorder that may be angiographically and histologically characterized by necrosis of the tunica media and the development of numerous small pseudoaneurysms that can resolve or progress at will. SAM involving the carotid arterial system is uncommon, but well documented in the published literature. While we can find no reported cases of SAM following penetrating injury and are unable to obtain tissue for histopathologic diagnosis, we believe the typical appearance of our patient’s imaging studies support its presence. Abrupt trauma induced sympathetic discharge and subsequent vasa vasorum vasoconstriction remains a plausible explanation for this individual’s arterial abnormalities. Following psychiatric intervention, we hope to be able to reevaluate the patient and, if necessary, provide definitive care to exclude the pseudoaneurysms from the native circulation while at the same time preserving cerebral blood supply.

The authors have no financial or other conflicts of interest related to this case and its manuscript’s contents. 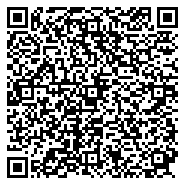