Vitamin D plays a critical role in bone metabolism and many cellular and immunological processes. Serum 25-hydroxyvitamin D3 [25(OH)D3] is produced in the skin in response to exposure to ultraviolet radiation, and is a good indicator of vitamin D status. The aim of this study was to determine summer/ winter differences in serum 25(OH)D3 and Parathyroid Hormone (PTH) in Saudi pre and postmenopausal women and in adult males. We focused on the interaction of Vitamin D with other biochemical markers of bone metabolism like PTH, ALP and Calcium and how it varies on seasonal changes. The subjects were 115 Saudi adults divided into three groups; 31 males, 42 premenopausal and 42 postmenopausal women. They were medically examined twice, in summer (April-July 2014) and winter (December 2014-February 2015) months. 25(OH)D3, PTH, TSH, ALP, calcium and inorganic phosphorus were estimated and found that status of vitamin D varies significantly with seasonal changes (highest being in summer), age and also with sex. Seasonal differences in the 25(OH)D3 concentrations in these subjects appeared to reflect ability to produce 25(OH)D3 photochemically in the skin. In addition to vitamin D, levels of biochemical markers exhibited summer/winter differences and also varied among the pre and postmenopausal women and were statistically different from males.

Vitamin D, a steroid hormone is well known as sun vitamin due to the requirement of sunlight for its synthesis. It is an essential nutrient for healthy bones and its deficiency may result in rickets in children and myopathy, osteopenia, secondary hyperparathyroidism and osteomalacia in adults [1]. The vitamin D level is regulated through the interaction of various factors, including intestinal absorption, renal function, serum calcium level and Parathyroid Hormone (PTH). Serum concentration of 25(OH)D3 is the best indicator of vitamin D status. It reflects vitamin D produced cutaneously and that obtained from food and supplements and has a fairly long circulating half-life of 15 days [2]. While several risk factors contribute to vitamin D deficiency, perhaps the major determinant of circulating vitamin D levels is the total amount of sunlight absorbed by the skin, which in turn is influenced not only by individual differences, but also by geographical and seasonal variations. The kingdom of Saudi Arabia (KSA) has unique conditions that influence vitamin D status, even though it is sun-drenched throughout the year and temperatures often rise above 50°C (122°F) during summer.

Vitamin D plays an essential role in calcium homeostasis and the development and maintenance of skeleton. It maintains the normal serum calcium level by increasing the intestinal absorption of calcium [3]. Vitamin D deficiency lowers intestinal calcium absorption from 30% to15%. Another important measure is the serum PTH level (Parathyroid Hormone) which increases in response to insufficient calcium in order to stimulate bone resorption and increase the serum calcium necessary for the different biological processes in the body, e.g. muscle contraction and nerve conduction [4]. PTH may be an important determinant of cortical bone remodeling in the elderly men and women. Vitamin D deficiency results in decreased serum phosphate (due to increased renal excretion of phosphate caused by secondary hyperparathyroidism) and increased Alkaline Phosphatase (ALP) [5]. Alkaline phosphatase is considered to be a factor required for the synthesis and mineralization of new bone, its exact function is still unknown. Being a product of osteoblasts, raised serum levels of alkaline phosphatase indicate state of increased bone turnover. That is why it is used as a bone formation marker [6]. The objective of this study was to understand summer/winter differences in serum 25(OH)D3 and how the summer and winter values are related. The levels of 25(OH)D3 were measured in pre and postmenopausal women and compared with adult males living in Riyadh, Saudi Arabia (24.6333° N, 46.7167° E). The study also reports the effect of season, age, gender on levels of vitamin D and other bone markers like ALP, PTH and calcium.

A total of 115 Saudi adults divided into three groups [31 males, 42 premenopausal women (age<45 years) and 42 postmenopausal women (age>45)] were recruited for the study. The study was conducted at Clinical Laboratory Science Department, King Saud University, Riyadh, in collaboration with King Abdul Aziz Hospital, King Saud University. Institutional ethical committee and review board approved the work. Inclusion criteria: Patients with no calcium or vitamin D supplement for 6 months prior to study, and had no history of any other bone disease were included. Exclusion criteria: Patients with family history for osteoporosis, medical history of hypertension, coronary heart disease, vitamin D deficiency and thyroid malfunction were excluded. Participating subjects were recruited and enrolled in Primary Health Care Unit (PHCU) of King Abdulaziz Hospital, during the summer months (April-June 2014). An informed consent was obtained from all patients included in the study. They were asked to return after overnight fasting for more than 10 h for blood withdrawal. Same patients were called later after 6 months during winter (December 2014-February 2015) and again samples were collected and assessed for Biochemical markers along with evaluation of vitamin D status.

Statistical analysis was performed using SPSS software. Comparison between the groups was done by one way ANOVA followed by Holm-Sidak test. A value of P <0.05 was considered to be statistically significant. The correlation between levels of vitamin-D, PTH, TSH, calcium, phosphorus and ALP in the three groups during summer and winter were determined using Pearsons correlation (r) and multiple regression analysis.

Effect of season on the serum levels of vitamin-D, PTH, TSH, calcium, phosphorus and ALP in males and females are depicted in Table 1. Premenopausal women had significantly higher vitamin D compared to males and postmenopausal women. 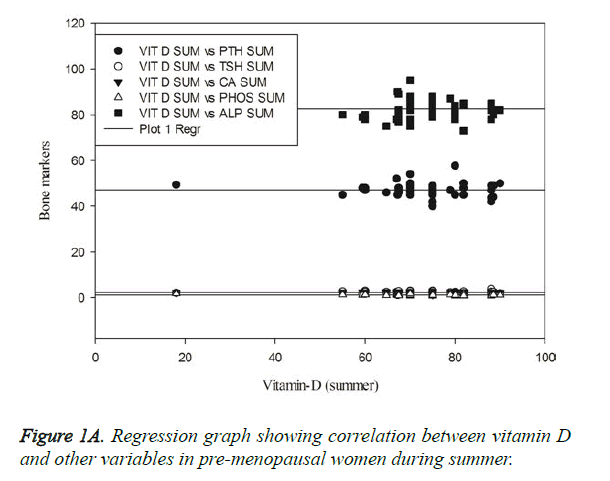 Figure 1A. Regression graph showing correlation between vitamin D and other variables in pre-menopausal women during summer. 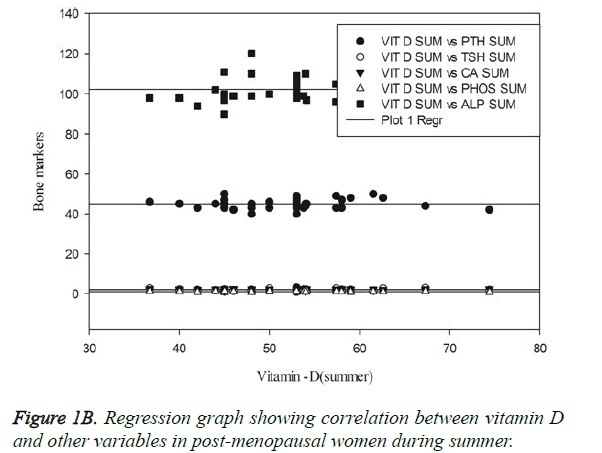 Figure 1B. Regression graph showing correlation between vitamin D and other variables in post-menopausal women during summer.

Table 1. Effect of season on levels of vitamin D and bone markers in male and females.

Among males, there was significant change in levels of vitamin D during summer and winter season. Males had significantly higher vitamin D in summer compared to winter (p<0.001). In females, serum levels of vitamin D were found to be higher (p<0.001) in summer compared to winter and also higher than the adult men and post-menopausal women. The summer/ winter differences in vitamin D in postmenopausal women was also statistically significant (p<0.001). Comparison of the biochemical markers of bone between the groups-pre, post menopause women and males in summer and winter are shown in Table 2. In contrast to vitamin D, serum levels of PTH, TSH, calcium and ALP were found to increase in respective groups in winter compared to summer. PTH was significantly higher in males compared to females of all ages (p<0.001).

Table 2. Comparison between groups in vitamin D status and other biochemical parameters during summer and winter. 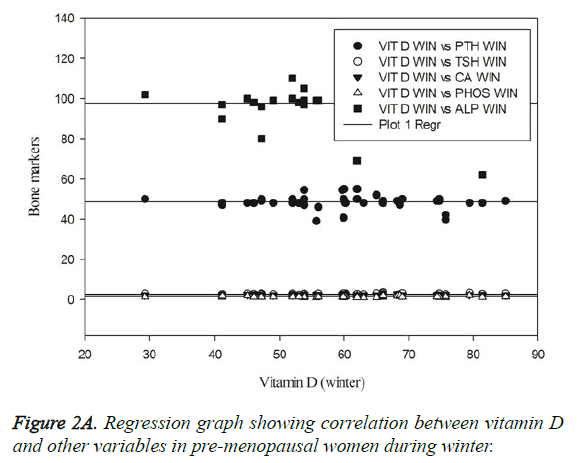 Figure 2A. Regression graph showing correlation between vitamin D and other variables in pre-menopausal women during winter. 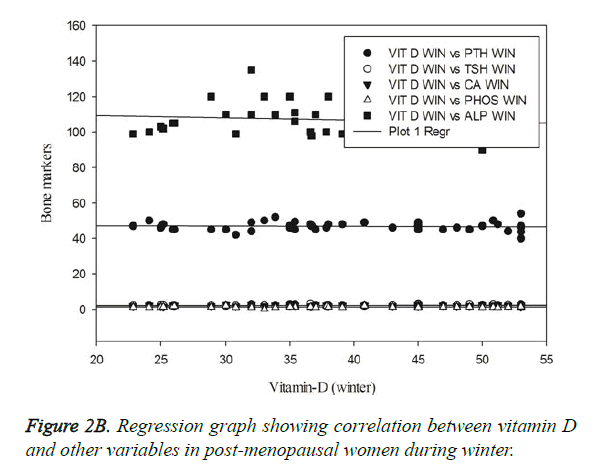 Figure 2B. Regression graph showing correlation between vitamin D and other variables in post-menopausal women during winter.

Vitamin D plays a critical role in bone metabolism and many cellular and immunological processes. Low levels of vitamin D have been associated with various chronic diseases, especially osteoporosis [7]. Vitamin D is synthesized in the skin through exposure to UVB radiation, and solar radiation is the primary source of vitamin D for most people [8]. Thus, sunlight exposure during the summer months is the more likely explanation for the seasonal change in serum 25(OH)D3. In areas far from the equator the amount of UVB available from sunlight during the winter months is inadequate to allow cutaneous vitamin D synthesis. However, in Saudi Arabia there should be sufficient sunlight to allow for vitamin D synthesis [9].The current study found a marked decrease in the serum 25(OH)D3 level in both male and female blood donors with summer/winter differences. Females had higher vitamin D compared to males. Similar findings have been reported from New Zealand and Brazil [6]. Furthermore in all subjects there was a slight decrease in the mean serum vitamin D concentration during winter when compared to summer. This is an expected result, which suggests that the subject under study has increased levels of vitamin D acquired through sunlight exposure and diet compared with winter.

Maximal bone mass is achieved between 20 and 40 years of age, after which bone loss occurs in both genders. Bone loss with ageing is the result of complex interactions of multiple factors, including genetic traits, environmental variables, diet, physical activity, gonadal status and calciotropic hormones [10]. PTH is an important calcium-regulating hormone. Seasonal changes in serum PTH have been closely associated with seasonal changes in serum 25(OH)D3. In winter, serum PTH was high when serum 25(OH)D3 was low, and in the summer serum PTH was low when serum 25(OH)D3 was high. Seasonal changes in serum PTH are implicated in the pathogenesis of bone loss in the elderly [11]. The gender impact observed in the current study and the effect of season is shown in Table 1. Levels of PTH in the elderly are of concern because high PTH levels, i.e. hyperparathyroidism, accelerate bone loss and are believed to be caused in part by low 25(OH)D3 levels [12]. Similar to PTH, serum levels of TSH were found to increase with decreasing Vitamin D status. The mean values of TSH were elevated in females than males. The data also indicated that serum TSH level is lowest in summer while highest in winter. This observation is in accordance with previous work by Chaurasia et al. [13]. However, some contradictory results were reported, the TSH levels are not influenced by gender [14]. This study also found that serum TSH levels of pre-menopausal women were higher than those of men. This result may indicate that TSH secretion is regulated by sex hormones, genetic susceptibility, or environmental factors, which may also mediate the relationship between vitamin D status and serum TSH levels.

In the present study, the serum calcium levels showed a significant seasonal variation, with lower values in summer and higher values in winter. Our results are in accordance with Rapuri et al. [15]. In contrast to Rapuri et al. our study showed significant change with respect to serum phosphorus levels. These changes may be because of racial differences. Vitamin D and Calcium were positively correlated in premenopausal women and negatively correlated in males during summer and winter indicating the changes in levels of Calcium is also influenced by gender. The correlation between calcium and vitamin D were oppositively correlated during summer and winter in postmenopausal women that may be due to increase in serum PTH in winter in these women. Other factors related to parathyroid function in the elderly may influence the seasonal changes in serum PTH.

Serum alkaline phosphatase (ALP) is the most commonly used biomarker of bone formation. ALP is a ubiquitous enzyme that plays an important role in osteoid formation and bone mineralisation. Osteoporosis is more common in postmenopausal women and not only gives rise to morbidity but also markedly diminishes the quality of life in this population.

The serum alkaline phosphatase (ALP) levels were significantly increased in the post-menopausal group 102 (SD 6.2) compared to the pre-menopausal group 82 (SD 5) (P=0.001) (Table 2). It has also been shown that oestrogen deficiency, as occurs during menopause, induces the synthesis of cytokines by osteoblasts, monocytes, and T cells and thereby stimulates bone resorption by increasing osteoclastic activity. This action results in modification of the reabsorption, excretion, and resorption of calcium, which leads to increased circulating levels of this ion [7]. Thus, we have reported a positive correlation between serum calcium and ALP levels in post-menopausal women (Table 2).

In summary, this study on Saudi women and men yielded the following findings: 25(OH)D3, ALP and PTH concentrations showed summer/winter differences. This suggests that seasonal differences in 25(OH)D3 in individuals reflect the ability to produce 25(OH)D3 photochemically in the skin which in turn altered by change in age and gender. From the present study it can be concluded that the age, gender and seasons have an appreciable effects on the status of Vitamin D and levels of TSH and other biochemical markers of bone metabolism.

The authors are thankful to be supported by the research center, Center of Female Scientific and Medical Colleges, Deanship of Scientific Research, King Saud University, Riyadh, Saudi Arabia.