In recent years, Continuous Renal Replacement Therapy (CRRT) has been applied extensively in multiple organ dysfunction syndrome [1]. Obstruction of vascular may seriously decline the efficacy of CRRT [2,3]. Therefore, blood purification treatment is crucial for maintaining the patency of vascular access [4]. Thrombosis is the most common complication of double-lumen catheters in hemodialysis [5]. The incidence rate of thrombosis caused by different concentration of sealing-up fluid was 2.6-35.5% [6]. Heparin saline is the most frequently used sealing-up fluid during CRRT. Heparin saline, as anticoagulant, is the useful agent to prevent thrombosis in catheter. But excessive concentration of heparin would lead to bleeding and coagulopathy; while inadequate concentration of heparin may result in thrombosis [7,8]. There is not yet a unitary standard for the concentration of heparin in China. 1000 IU/ml of heparin is considered a standard concentration, but it ignores the impact of coagulation factors on the patency of vascular access [9,10]. There are coagulation dysfunction and thrombopenia in critical patients under APTT above 55 s [11-13]. Obviously, single concentration of heparin cannot be applied uniformly to the patients with different physiological and pathological conditions.

Inclusion criteria for this study were as follows: patients with continuous blood purification therapy ≥ 2 in ICU; the temporary double-lumen of dialysis catheter was indwelt in patients; the sites of catheter were femoral vein; patients with hypertension did not have diabetes and pregnancy.

The double-lumen of dialysis catheters (Bard International Ltd, USA) were used for carrying out blood purification treatment in all patients. The patients in A and B groups were divided into low risk-hemorrhage population (APTT<55 s) and high risk- hemorrhage population (APTT ≥ 55 s), respectively. Ten microliter of normal saline was used for washing residual blood in the end of artery and vein, the correspondent concentration of heparin was then used for positive pressure sealing by closing heparin cap. The catheter was proper fixation after sealing tube cavity and the covering catheter with sterile gauze.

Comparison of gender, age and APTT in patients with or without hypertension

Table 1: The comparison of gender, age and APTT between A group and B group. 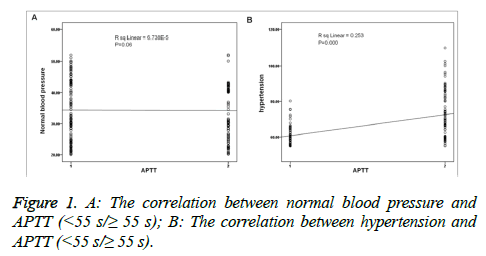 The different concentration of heparin adopted in this study was based on our clinical experiences and some previous reports. In low risk-hemorrhage population (APTT<55 s) in A group (patients without hypertension) and B group (patients with hypertension), PT, INR and APTT subjected with 1000 IU/ml and 500 IU/ml for 1 h were both significantly increased compared with before sealing tube (P<0.05; Table 2). By contrast, after sealing tube for 4 h, PT, INR and APTT showed no significant differences compared with before sealing tube.

Table 2: The general condition of patients with CRRT.

In high risk-hemorrhage population (APTT>55 s) in A group and B group, PT, INR and APTT subjected with 500 IU/ml and 250 IU/ml for 1 h were both increased compared with before sealing tube (P<0.05; Table 2). By contrast, after sealing tube for 4 h, PT, INR and APTT decreased to the level that showed before sealing tube. It was indicated that, no matter with or without hypertension, APTT had no significant influence on the concentration of heparin used in patients.

In patients with hypertension, the activity of renin-angiotensin-aldosterone system is increased, which will enhance the platelet aggregation effects of paranephrine. The function of vascular endothelial cells is impaired and hypertrophic, resulting in an imbalance of secretion of fibrinolytic activity regulation factors. In addition, sympathetic function is hyperactive to promote platelet aggregation [17,18]. Therefore, balance between coagulation system, and fibrinolytic system is broken, causing the abnormality of blood coagulation mechanism (hypercoagulability) in patients with hypertension [19]. Blood hypercoagulability can increase the risk of thrombosis and bleeding. APTT presents the state of hypercoagulability [20]. According to the data in our clinical experiences, APTT<55 s was considered as low-risk hemorrhage and APTT ≥ 55 s was considered as high-risk hemorrhage.

Heparin, a highly sulfated proteoglycan, is widely used blood-thinner and has complex blood anticoagulant mechanism that affects multiple parts in coagulation process [21,22]. The effect of heparin is apparent within a short time, but eliminate quickly. The excessive concentration of heparin can result in bleeding [23,24]. By contrast, lower concentration of heparin can result in thrombosis [25]. In CRRT, 1000 IU/ml heparin was used as the standard concentration for tube-sealing to maintain the smooth of vascular access and prevent thrombosis. However, it was considered to effect bleeding rate of patients during CRRT. Therefore, it is not suitable to use the uniform standard heparin concentration to different patients.

The major limitation of this study was the sample number was small. Another weakness was that the observation was local. Thus it may be interesting to undertake in-depth exploration from large sample trials.