Background: Behavioral symptoms in schoolchildren have been observed in preschoolers. As severe symptoms are more likely to persist and require treatment, proper assessment and early intervention are required in that age group. Aim: In this cross-sectional, community-based study we examined problem behaviors in Emirati children between the ages of 1.5 to 5 years.

Method: The study was conducted between October 2015 and June 2016 at the Ambulatory Health Services in Abu Dhabi. Parents (84.9%) and other primary caregivers (15.1%) reported on internalizing and externalizing behavior problems using the Arabic version of Child Behavior Checklist/1.5-5 (CBCL/1.5-5) which was used to analyze the resulting behavior profiles.

Several studies have confirmed that problem behaviors are commonly displayed in preschool children [1-4]. Screening young children for behavioral and emotional problems should, therefore, be considered a national priority [5].

Reports on mental health problems in toddlers and young children in the Arab world are scarce [6-10]. One regional study showed that behavior problems occur in 13.5% of children between the ages of 5.4 and 16.6 years [9]. In a more recent study, confirmed childhood autistic disorders were reported in 29 per 10,000 children [10]. Follow-up studies are needed to determine how the prevalence of these childhood problems changes in this rapidly developing society.

Behavior symptoms in schoolchildren, such as anxiety, depression, aggression, hyperactivity and impulsivity have been observed in preschoolers [11,12]. It has been shown that the presence of internalizing and externalizing symptoms between the ages of 2 and 3 years predicts their persistence at the age of 10 years [13] and this has been referred to as homotypic stability. In contrast, the term heterotypic stability refers to the different behavior problems that may also evolve over time [5]. Severe and complex symptoms (e.g., coexisting internalizing and externalizing problems) are more likely to persist and require early treatment to prevent the development of progressive illnesses [4]. Therefore, early proper assessment and intervention are most needed for affected young children.

Population-based studies are, therefore, needed to determine the epidemiology, risk factors and outcome of emotional and behavioral problems in preschool children in our country. We have undertaken this study to assess the prevalence of behavioral problems in Emirati children aged 1.5 to 5 years, using the Child Behavior Checklist/1.5-5 (CBCL/1.5-5) as a screening instrument.

In this cross-sectional, community-based study, we used the standardized and validated Arabic version of CBCL/1.5- 5 years, which was completed mainly by parents in the presence of a trained staff member [6-8]. Families presenting to the Ambulatory Health Services (Abu Dhabi) for a routine healthcare visit between October 2015 and June 2016 were recruited for the study.

The parent’s ratings of the child’s problem behavior were fitted into seven internalizing and externalizing symptoms and five DSM (Diagnostic and Statistical Manual)-oriented diagnoses and analyzed on the CBCL/1.5-5 scales [1,2]. A T-score of ≤ 64% was considered normal, 65-69% borderline and ≥ 70% abnormal [6,7]. The study was approved by the Medical Ethics Committees for Human Research of the Medical District and the Ambulatory Health Services (Health Authority of Abu Dhabi). Written, informed consent was obtained from the parents or primary care giver of all participants and anonymity was assured.

The children’s characteristics are shown in Tables 1A and 1B. Their age (mean ± SD) was 38.8 ± 12.5 months (median=38.0, range=18-60 months). Problem items for the 815 (47.7% females) children studied were rated either by mothers (80.7%), fathers (4.2%) or for 15.1% by other primary caregivers (Table 1A). Most children had multiple siblings as well as caregiving house helpers other than their mothers, and were exposed at home to spoken languages other than Arabic. Fifty-three percent of the children were attending nursery or kindergarten schools (Table 1B).

Table 1A. Sample characteristics (n=815)*. *Nine hundred sixty-one children were enrolled in this study. Fifty-seven (5.9%) children were not included in the analysis for missing age, 44 (4.6%) for age >60 mo, 14 (1.5%) children for age ˂18 mo and 31 (3.2%) for nationality
Thus, the analysis was performed on the remaining 815 (84.8%) Emirati children
£Sample distribution was proportional to the Emirati population residing in Abu Dhabi

Table 1B. Sample characteristics (n=157). Values are number (%) of participants. *Mostly from Indonesia, Ethiopia, Philippine and Bangladesh
**English was the predominant other language
Missing data were because of incomplete responses.

This study assessed the prevalence of behavioral and emotional problems in preschool children, based on their parents' report questionnaire, using the standardized CBCL/1.5-5 tool [6,7] (Figure 1S). The prevalence of internalizing problem items was 8.3% and of externalizing problem items 1.7%. Children with borderline T-scores (Table 2) also require follow-up assessments similar to those in the abnormal group. From these results in the small sample of preschool children studied, the need for implementing childhood behavioral screening and intervention programs for the entire community becomes imperative.

Behavioral and emotional difficulties, often neglected in young children, will manifest as conduct disorders in adults [14]. Furthermore, parents often trace their children’s conduct (e.g. fear, aggression, tantrums, hyperactivity and inattention) to their preschool years [15]. Therefore, early recognition of these symptoms in toddlers offers opportunities to address family education, behavioral modification as well as liaison with schools [16]. Affected children need to be followed closely and referred for further assessments and for treatment, when necessary [17,18]. 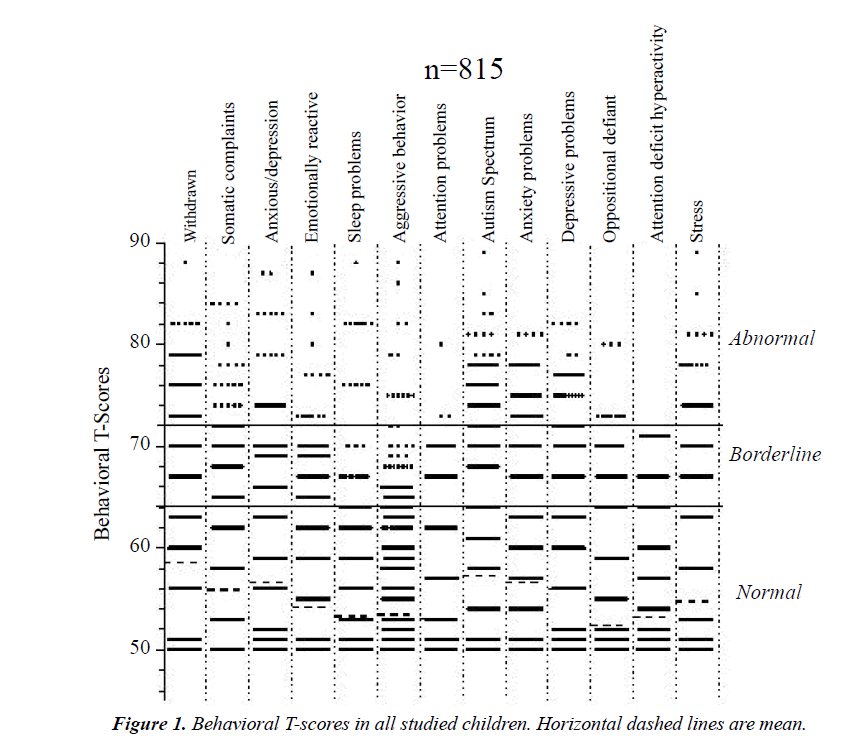 Studies have already demonstrated that routine healthcare visits are optimal opportunities for identifying young children at risk of autism and other significant problem behaviors [17,18]. As a result, many “parent-report child behaviorrating scales” are already available for outpatient clinical use [17]. The scale which was used in this study (CBCL/1.5- 5) has already been previously validated and also used as a screening instrument in our community [6,7].

In 1995, a study from the same city showed the prevalence of behavior problems (including emotional, conduct and undifferentiated disorders) in children between the ages of 5.4 and 16.6 years was 13.5% (16.3% in boys and 10.2% in girls) [9]. The authors concluded that “a considerable proportion of young children manifest signs of behavior disorders in primary school and that primary school child in this city and comparable areas, should be screened for behavior disorders. Affected children will require confirmation of the presence or absence of behavior disorders by health professionals” [9]. Two decades later, our results from the same city (Tables 2S and 3S) are consistent with the above conclusion and reinforce the resulting recommendations.

It is important to recognize that behavioral screening instruments, which depend on information provided by parents, are not a substitute for a rigorous evaluation by a specialist. Further assessments should always include thorough personal and familial histories. Once a problem is confirmed, a clear plan of management should be promptly instituted.

In view of the diversity of the childhood behavioral and emotional problems associated with a wide range of potential comorbidities, specific questions should always include assessment of cognitive development, language acquisition and other learning skills. Prior neurologic, psychiatric or traumatic history or a family history of behavioral or emotional difficulties should also be considered.

In summary, the profiles of behaviors with externalizing and internalizing symptoms found in this study support the need for implementing regular toddler behavioral screening and early interventional treatment programs for affected young children in our community.

We thank the participating families and AHS staff for their support of this work. We are also grateful to Mrs. Sania Al- Hamad for staff training and collecting data.

Conflicts of Interest and Source of Funding

This work was supported by the United Arab Emirate University and the Ambulatory Health Services of Abu Dhabi. There is no conflict of interest. For the remaining authors none were declared. The study was approved by the Medical Ethics Committees for Human Research of the Medical District.